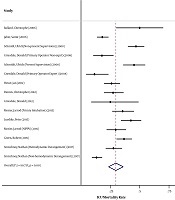 Mortality Related to Intubation in Adult General ICUs: A Systematic Review and Meta-Analysis

Mortality related to intubation occurs as a result of multiple factors such as patient's condition, operator's skills, equipment use, intubation time, duration of laryngoscopy and intubation, and drugs and dosage used for endotracheal intubation (ETI).

We found 7,866 articles in the literature review from the three databases based on our keywords, of which 28 studies were eligible to include in the study. We observed that mortality related to intubation and the overall ICU mortality rate in intubated patients were 1% and 30%, respectively.

This was the first comprehensive systematic review on mortality related to intubation and the overall ICU mortality rate in adult general ICUs, which showed the current care of ETI. However, it was associated with increased complications, which may increase mortality.

Endotracheal intubation (ETI) is an indispensable and common procedure in intensive care units (ICUs). It protects the patient's airway or provides invasive mechanical ventilation to treat respiratory failure as a common problem in critically ill patients (1-7), which is correlated with numerous complications including mortality. This procedure will be performed in different locations for critically or non-critically ill patients. For example, tracheal intubation is performed before surgery in the operating room (OR). Orotracheal intubation is usually performed electively in OR in a comfortable condition. However, it needs to be immediately performed in ICU during emergency conditions under troubling circumstances to prevent aspiration because patients are generally not in a fasting situation (8). Some methods are used for tracheal intubation in critically ill patients such as fiber-optic, video laryngoscopy, and direct laryngoscopy (DL). However, the standard of care and the most common method is DL with Macintosh blade, and rarely, Miller blade. DL has a high success rate in expert hands; however, it decreases the chance of first successful intubation in emergency conditions with a poor patient's condition and a non-expert operator. It also causes frequent intubation attempts due to an excessive danger of complications and a low operator's experience level (3, 8, 9).

Different pharmacologic agents such as propofol, ketamine, etomidate, benzodiazepine, and opioids, as well as neuromuscular blocking agents are used to provide perfect intubation conditions. However, these drugs are associated with significant complications in hemodynamically unstable ICU patients, especially when used by those with low training and experience levels (10). Some serious complications might occur due to intubation, which may be related to patients, operators, instruments, drugs, and emergency conditions (11, 12).

Studies on mortality related to intubation and the overall ICU mortality rate due to ETI published up to the end of 2018 were included. Mortality related to intubation is considered as mortality during and 60 minutes after intubation, and the overall ICU mortality rate is defined as the mortality of intubated patients during admission and the period in the general ICU. PubMed, Embase, and Google Scholar were systematically reviewed using appropriate textual content phrases and dictionary expressions for articles related to the following terms: any phrases including mortality rate and their synonyms or acronyms, intensive care unit and its synonyms, intubation and its synonyms or acronyms, and age above 18 years. However, there was no limitation on date, language, and geographical sites for selecting articles. Searches and evaluations were undertaken in the reference lists of the selected articles by hand searching. All citations were downloaded into EndNote.

Studies with narrative and descriptive assessment, studies with unknown case definitions, studies in pediatric and obstetric ICUs, at the emergency department (ED), OR, inwards, and outside hospitals, and studies mixing different departments without separated results or data were eliminated from the study. Potentially applicable articles were recognized according to the above-mentioned inclusion and exclusion criteria, and replications were omitted. The remaining articles were assessed for enrollment, first based on title and then based on abstract, before downloading their full texts. The subjects were arranged based on the following criteria: data and type of study; authors; year of publication; participants’ age range; age standard deviation (age SD); the male/female percentage; quality assessment; sample size, and number of events.

Data were extracted from studies with the exact rate of mortality related to intubation immediately after the procedure until 60 minutes in elective or emergency intubation and difficult intubation, specifically in adult general ICUs. The studies used usual care, direct laryngoscope for ETI, and simple face masks for preoxygenation without using video laryngoscope or fibro optic, high flow nasal cannula (HFNC), and non-invasive positive pressure ventilation (NIPPV), and also, without loading fluid or using vasopressor prior to intubation. The main focus of the studies was on mortality related to intubation in general ICUs.

Afterward, we excluded articles with a quality assessment score of less than 0.6. Finally, 28 articles were included in the study, mentioning the exact number of death cases related to intubation and the overall ICU mortality rate. After three (four if necessary) experts on epidemiology independently assessed the full texts of the selected articles, statistics were entered into an excel database, specifically designed for this review, and analyzed using STATA version 14.1. Figure 1 shows a diagram describing the study design process. 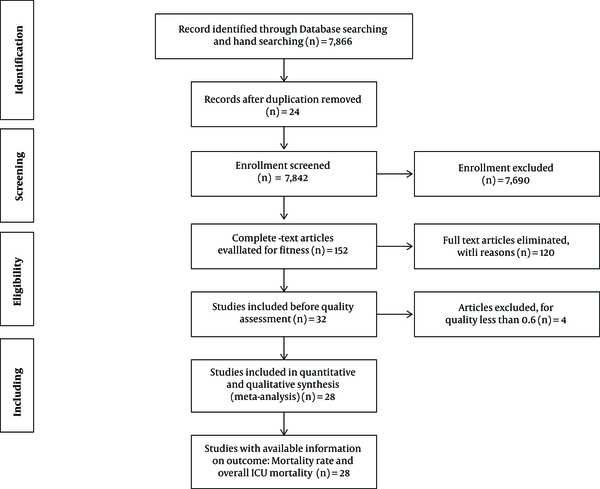 The diagram of the study design process

We used a metaprop command using STATA version 12.1 (StataCorp, College Station, TX, USA) for pooling proportions. We estimated 95% confidence intervals using the score statistic and the exact binomial method and Freeman-Tukey double arcsine transformation of proportions via ftt option. The heterogeneity of the prevalence estimates between the studies was decided using the I2 index. A random influence model was used unless the index was < 25%; In that case, a constant outcome model would be used (10). The generation of a funnel plot and the Egger and Begg P value permitted the determination of potential publication bias in the selected studies. The influence of the study characteristics (such as age, date, and quality level) was explored using meta-regression. Moreover, the methodology was assessed according to the STROBE checklist for the cohort and cross-sectional studies and according to Jaded tools for the randomized clinical trials. Each study with a 0.6 score higher than the maximum score was considered as a high-quality study. 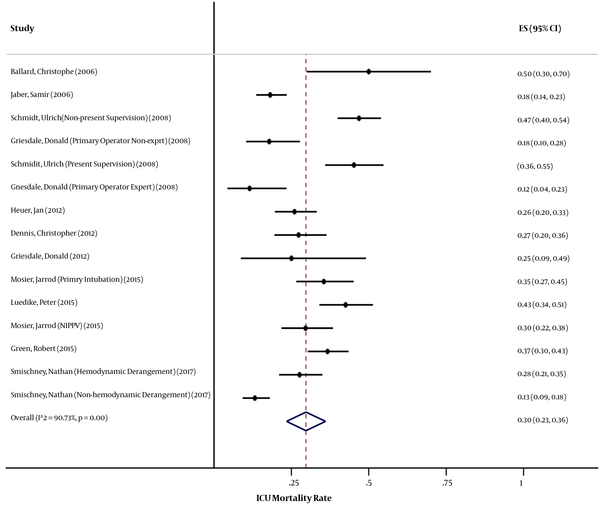 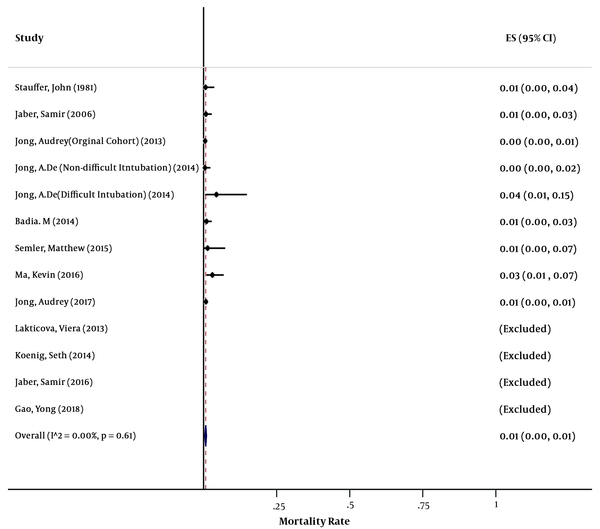 Tracheal intubation is a routine and lifesaving technique in ICUs. Life threatening complications may occur in a significant number of intubations, but those complication are less frequent when intubation were done after complete preparation (2-4, 6, 11). The present study was the first systematic review and meta-analysis that evaluated the rate of mortality related to intubation, specifically in general ICUs.

This study described mortality related to intubation occurring during or 60 minutes after the procedure. Of the 4754 intubations performed, 34 cases died (1%). The ICU mortality of intubated patients was defined as the death of intubated patients during ICU stay. Of 2054 individuals in studies selected for the purpose of the current review, 604 cases died (30%). Petrini et al. and Ma et al. (12, 13) reported that the rate of mortality during and 60 minutes after intubation was 3%, which is higher than that in our study. Schwartz et al.'s study (6) showed the rate of mortality related to intubation to be 3%, which is higher than that in the current review. Schwartz's study was not included in our review because it reported the mortality rate outside ICUs.

The most popular complication of tracheal intubation in ICU is hypoxemia (4, 17), which is a potent risk factor for periprocedural cardiac arrest and death (5). Semler et al. (14) reported that the mortality rate was lower in apneic oxygenation via high-flow nasal cannula oxygen preoxygenation during larngoscope (0%), as compared with usual care (2.8%).

Acute respiratory failure occurs due to dramatic changes in the lung and high shunt fraction, which may lead to disturbance in gas exchange. Patients with acute respiratory distress syndrome are at a higher risk of hypoxia. Thus, the intubation of these patients should be performed with adequate preparation (3, 19, 20).

The use of intravenous anesthetic drugs and neuromuscular block drugs is associated with lower mortality. However, a majority of ICU patients are hemodynamically unstable, which may increase the rate of complications and mortality following the administration of anesthetic, hypnotic, and analgesic drugs. Mort et al. reported that the hemodynamic effects of pharmacologic agents used for induction in emergency ETI in ICU patients were common. Wilcox et al. (25) showed that the use of muscle relaxant drugs caused a lower prevalence of hypoxemia and procedure-related complications and improved tracheal intubation conditions. They also reported that the use of muscle relaxant drugs diminished the procedure-related complications when used with sufficient training and experience.

Moreover, Ma et al. had two groups in their study. The mortality rate was 0% in the first group (intubation by bronchoscopy), while it was 3% in the second group (DL intubation), showing the low rate of first successful intubation in case of using DL.

Semler et al. mentioned that the mortality rate was 2.8% higher while supplementing oxygen during laryngoscopy compared with non-supplementation (0%).

A higher overall ICU mortality related to intubation was observed in three articles, 50% mortality was referred using preoxygenation three minutes prior to intubation with non-rebreather bag-valve masks, compared with 30% in NIV group, Christophe Baillard. Schmidt et al. reported 47% mortality in ICUs that manage with non- attending supervision (26). Peter Luedike et al. mentioned 43% mortality related to intubation failure by non-anesthesiologist ICU trainees (27).The standard of care for ETI is used in ICUs, but it is associated with many complications that increase mortality. Moreover, intensive care specialists believe that additional procedures added to the standard of care will improve the outcome and decrease the rate of post-intubation mortality.

Insertion of ETI in ICUs is often decisive, and in addition to considering airway management and equipment, we should also take into account hemodynamic stability, gas exchange, neurologic protection, and drug use.

Our study has some limitations. Different protocols for intubation were used in different ICUs, and the patients’ conditions were not clearly defined, or even, were not mentioned in some of the papers. Like with all previous meta-analyses, the presented review was subject to information bias. The second limitation of the study was related to the accuracy of data summation as the experts had possibly different skills or training levels.