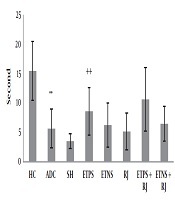 The Alzheimer disease (AD) induces the central and peripheral nervous system disruption by increasing oxidative stress; therefore, it induces disruption of the physical condition as well as occurrence of chronic pain.

The present study aimed at investigating the interactive effects of endurance training (ET) on positive and negative slope and royal jelly (RJ) consumption on motor balance and pain threshold in animal model of AD.

It seems that to improve the motor balance in AD, ETPS and ETNS can be employed with RJ consumption.

Today, one of the important medical goals is to improve the quality of life in people with cognitive impairment and motor limitation and reduce unknown pain caused by dementia (1, 2). It is reported that unknown pain causes health problems and reduces quality of life in patients with dementia; studies also show that such pain can reduce desire to perform physical activity by decreasing the range of motion (3). The noted disorders in people with mental impairment induce an impairment called falling syndrome, which affects a significant number of elderly people (1).

Clinically, the Alzheimer disease (AD) and central and peripheral nervous system disorders impair the sensory-motor system and cause pain (3, 4). Since increased inflammation and decreased function of the nervous system are closely related to pain and decreased muscle strength and balance (5), it seems that increased oxidative stress caused by AD in the central and peripheral nervous system reduces neurotrophins (4), range of motion and balance, and increases chronic and unknown pain; therefore, it has significant effects on progression of AD.

Today, physical activity is considered as an undeniable necessity for the health and well-being by researchers. Exercise seems to be associated with increased β-endorphins in the somatic nervous system, decreased function of the sympathetic nervous system (6), and increased coordination of the nerve and muscle for voluntary control of body movements; it also improves the performance of this system and reduces peripheral pain (6, 7). In this regard, researches show that regular exercise increases the static and dynamic balance (8, 9), pain relief, and quality of life (8) in the elderly; it also reduces pain in elderly rats (10). Nevertheless, it was observed that core stability training had no significant effect on balance (11).

According to contradictory results regarding the effect of exercise type on balance and pain, using complementary medicine and natural products due to fewer side effects can improve symptoms of degenerative disorders. Recently, many researchers investigated the biological effects of the royal jelly (RJ) secreted by hypopharyngeal and submandibular glands of young bees (12). Researchers report that RJ by differentiation, proliferation, and repair of neurons has desirable effects on various brain parts associated with movement and balance (13) and induces its analgesic effects by increasing serotonin (14). In this regard, the consumption of 800 mg/kg RJ had pain relief, anti-depressant, and anti-anxiety effects on postmenopausal females (14).

The mechanism of action and effect of the type of muscle contraction seem to be essential factors in increasing the dynamic and static balance. To the best of authors’ knowledge, no study was conducted so far on the effects of eccentric and concentric endurance training (ET) on balance or RJ consumption on the treatment of some diseases; therefore, authors tried to open a new window of research for sport nutritionists. The present study aimed at investigating the interactive effects of ET on positive slope (ETPS) and negative slope (ETNS) along with RJ consumption on motor balance and pain threshold in animal model of AD.

The current experimental study was conducted on 56 male rats obtained from the Animal Breeding Center of the Islamic Azad University, Marvdasht Branch, Iran. Animals were transferred to the sports physiology lab and maintained under standard conditions for seven days in transparent polycarbonate autoclaving cages with the optimum temperature of 20°C - 24°C, relative humidity of 55% - 65%, 12:12 hour light-dark cycle, and free access to water and standard food pellets including crude protein 23%, crude fat 3.5% - 4.5%, crude fiber 4% - 4.5%, ash maximum 10%, calcium 0.95% - 1%, phosphorus 0.65% - 0.75%, salt 5% - 5.5%, humidity maximum 10%, lysine 1.15%, methionine 0.33%, methionine + cysteine 0.63%, threonine 0.72%, and tryptophan 0.25%. On the 8th day, 49 rats were injected 8 mg/kg trimethyltin chloride (TMT) intra-peritoneally (15) and three days (15) later after confirmation of hippocampus degeneration, AD symptoms were observed by a number of behavioral changes in rats. These clinical symptoms included muscle tremors, elevated body temperature, nausea, seizure, and tail twists. The rats with AD were equally divided into seven groups including AD control (ADC), ETPS, ETNS, sham (RJ solvent) (SH), ETPS + RJ, ETNS + RJ, and RJ. Also, in order to investigate the effects of AD induction on motor balance and pain threshold, seven rats were assigned into the healthy control (HC) group. ETPS (at a speed of 16 m/minute on a positive slope) and ETNS (at a speed of 16 m/minute on a negative slope) groups ran on a treadmill for five 60-minute sessions weekly for four weeks (16). The RJ groups received 100 mg/kg RJ daily for four weeks (17); 48 hours after the last training session and JR administration, the motor balance was measured by a rotarod apparatus and pain threshold was measured by a hot plate device.

The ability of rats to maintain balance and motor coordination was measured using a rotarod (Danesh Salar Iranian Company, Iran). For this purpose, the rats were placed on the device for three minutes for acclimation and were trained based on the original protocol (10 rpm cycling speed with 7 rpm2 velocity) and after 30 minutes, the balance test was performed (10 rpm with 7 rpm2 velocity), which was approximately 10 - 11 rpm. The duration of balance maintenance on the wheel was recorded in seconds for each animal. The total time was 300 seconds. The test was performed for each rat in triplicate with approximately 30 minutes interval, and the average was considered in the analysis (18).

To acclimate the animals to the device, the rats were placed on a hot plate device for about three minutes while it was off. On the test day, the rats were placed on a hot plate heated to 52.8°C and the interval between the placement of the rat on the device and the first reaction including lifting the leg, jumping, and trembling the feet simultaneous with lifting was considered as the pain threshold at the time that was measured by a chronometer; besides, to prevent tissue damage, the test lasted less than 60 seconds for each rat (19). Results of the present study showed that induction of AD by TMT significantly reduced the motor balance and pain threshold in rats. However, four weeks of ETPS and ETNS significantly improved motor balance, and ETPS significantly increased pain threshold in rats with AD. TMT is an organotin compound that causes selective destruction in the central nervous system. It is a neurotoxin, which induces neuronal death in the entire central and peripheral nervous system (15). The increased oxidative stress produced by TMT in the cells induces damage to nociceptors (20) and causes behavioral disorders, loss of balance, and muscle seizure in various areas of the body (15). It is reported that the administration of 8 mg/kg of TMT significantly reduces the density of the granular cells in the rat follicles (21), increases the level of reactive oxygen species (22), and elevates pain in the central and peripheral nervous system (23). On the other hand, the present study showed that ETPS significantly improved motor balance and increased pain threshold in rats with AD. Authors believe that physiological adaptations to exercises can improve the utilization of motor units and increase the vitality of the motor cortex in elderly people (24) through the reduction of oxidative stress and sympathetic system activity (25) as well as the increase of neurotrophins (26). In line with the present study findings, physical activity had a significant effect on the improvement of static and dynamic balance in the elderly (24); exercise training had a significant effect on improving motor balance and quality of life (27), and modified exercises had significant pain relief effects (28); nevertheless, weight-bearing training did not have a significant effect on dynamic balance in elderly males (29). The contradictory results can be explained by differences in the statistical population, type, intensity, and duration of exercises.

The results of the present study showed that RJ consumption significantly improved motor balance in rats with AD; however, it had no significant effect on pain threshold. It is reported that RJ consumption, in addition to antioxidant effects, could mimic the activity of brain-derived neurotrophic factor and directly help the regeneration of neural cells and neurogenesis (13). RJ helps to improve balance maintenance through a regulatory mechanism of increasing the steroid receptors and serotonin (as a major factor in pain management) (13) and also the increase in the expression of proteins involved in hypertrophy (30). Although studies are limited to the effect of RJ consumption on motor balance maintenance, researchers showed that the dose-dependent RJ consumption had a significant effect on the improvement of balance in mice (30); also, consumption of 800 mg RJ for 12 weeks had significant pain relief and anti-depressant effects in postmenopausal females (13). The incompatibility of the noted findings with those of the present study could be attributed to differences in the statistical population and dose of RJ; therefore, it seems that further studies in this area can be hopeful to improve motor balance and reduce pain.

Both ETPS and ETNS with RJ consumption had interactive effects on motor balance in rats with AD; nevertheless, they had no interactive effects on pain threshold. According to the reported studies, common mechanisms of action of exercises and RJ consumption in improving motor balance and pain threshold could increase antioxidant factors (13, 25) and neurotrophins (13, 26). Also, the dose of RJ seems to play an important role in exerting its analgesic effects. Therefore, it is suggested that different doses of RJ be examined in future studies. Considering the physiological effects of exercise and RJ consumption, it seems that the lack of evaluation of physiological changes in the central and peripheral nervous system related to motor balance and pain such as muscle mass, strength, and serotonin and prostaglandin levels were the limitations of the current study. Therefore, it is recommended measuring these physiological indicators along with motor balance and pain threshold in future studies.

It seems that ET on positive and negative slope and RJ consumption separately and in combination have desirable effects on motor balance improvement in rats with AD; however, analgesic effects were just observed in ET on positive slope.

The authors would like to express their heartiest thanks and gratitude to the Research Deputy of Islamic Azad University, Marvdasht Branch.