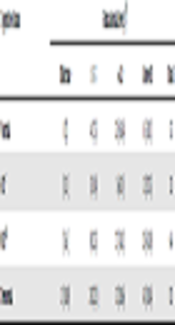 how to cite: Davoudkhani M, Kormi-Nouri R, Norouzi Javidan A, Sharifi F, Younesi F, et al. The Validity and Reliability of a Persian Version of the Brief Community Screening Instrument for Dementia in the Elderly Patients with Dementia in Iran. Arch Neurosci.6(3):e92611. doi: 10.5812/ans.92611.

The brief version of community screening instrument for dementia (CSI-D) is a neuropsychological tool, which can be used even by non-specialists in primary care settings following a short training. The CSI-D evaluates the cognitive and functional domains of the subjects and includes an informant interview. However, it should be adapted based on literacy level and sociocultural profile of population in each country.

The current study examined the validity and reliability of the Persian version of the brief CSI-D in elderly patients of Iran.

The current descriptive, cross sectional study was conducted on people 60 and over from 16 provinces of Iran with seven different ethnicities and various levels of education (0 - 13 to ≥ 13 years). The participants consisted of subjects with normal cognition, subjective cognitive impairment (SCI), mild cognitive impairment (MCI), and different types of dementia. Cognitive impairment was diagnosed by a neurologist with expertise in dementia. The psychometric properties were assessed by comparing Persian version of brief CSI-D with the gold standard. Area under ROC curve, optimal cutoff point, and sensitivity and specificity were also calculated.

Data were collected from 262 participants. Of all the participants, 112 were diagnosed with dementia, 64 with MCI, 32 with SCI, and 53 with normal cognition. The best cutoff point for the test- regardless of gender and level of education- was 8.5 compared with 8 - 9 in the original version of CSI-D and also the cutoff point for patient with dementia was 5.5, while it was 4 in the original version.

The Persian version of CSI-D seems to be an accurate and sensitive tool to screen dementia and MCI in primary care setting, especially among low-educated and illiterate people.

The global number of patients with dementia is increasing with aging of the population (1). However, its prevalence is not homogenous through the world. The number of people living with dementia is three to four times more in low- and middle-income countries (LMIC), while they have lower access to appropriate health care (2). In 2016, Alzheimer’s Disease International (ADI) announced that only 50% of people living with dementia receive a diagnosis in high-income country settings. This number is estimated to be less than 10% in the LMIC (3). The prevalence of dementia in Iran was estimated 7.9% in 2016; only 21.2% of them received diagnosis (4, 5). This is because of specialist-based approach to care of patients with dementia, which may lead to the health system failure in providing a comprehensive coverage for the growing number of people affected by this disease. According to the World Health Organization, dementia care would be more effective and less expensive when medical practices are shifted to primary care services, because health care services delivered by the experts in such centers are similar to those of specialists (3).

Cognitive screening is an accessible and inexpensive way for early detection of dementia. However, there are some challenging factors in the utilization of the instrument in primary care settings. Many of cognitive screening tools are not validated based on the sociocultural features, religion, and literacy level of different countries. In addition, many of those tests are time-consuming and need trained personnel for implementation. The community screening instrument for dementia (CSI-D) is an accurate screening tool, which was first validated by Hall in 1993. CSI-D includes 32 cognitive items administered to the patient and 26 informant questions, which evaluates the patient’s cognitive and functional domains. CSI-D was validated in different countries (6, 7); however, there is a long way to be calibrated for primary care setting. Therefore, the brief version of CSI-D (seven and six items for the participant and informant interview, respectively) was developed by the 10/66 Dementia Research Group and showed acceptable accuracy in primary care practice (8-10).

Since there is no curative treatment for dementia at this point, the early detection of the disease could decrease the disability-adjusted life years and burden of the disease on the health system (11). Neuropsychological assessments are valuable tools for the timely detection of cognitive impairments. However, these tests should be adapted to cultural features and literacy level in each country.

The current study aimed at validating the Persian version of the brief CSI-D in the elderly population of Iran.

The current descriptive, cross sectional study aimed at evaluating the validity and reliability of Persian version of the brief CSI-D in a geriatric population of Iran.

The participants were elderly people, aged 60 and above, referred to Yaadmaan Referral Center for Dementia and Cognitive Disorders in Tehran, Iran and received dementia, MCI, or SCI diagnosis by a neurologist with expertise in dementia. Of a total of 268 participants, 209 subjects had SCI, MCI, or dementia, and the remaining 53 subjects selected from the caregivers of patients in the center had normal cognition.

The raters were clinical psychologists trained by a neurologist with expertise in dementia to ensure that the study procedure (i e, data handling, data entry, and data analysis) is conducted properly. The raters were blind to the final diagnosis of the subjects.

Dementia, MCI, and SCI were diagnosed by a neurologist with expertise in dementia according to criteria in the Persian version of Diagnostic and Statistical Manual of Mental Disorders, Fourth Edition (DSM-IV-IR) and the functional assessment staging of dementia of the Alzheimer’s type (FAST) after clinical examination.

Inclusion criteria for all participants were the age 60 and above and speaking in Persian as maternal language. The eligible participants were allocated to three groups of dementia, MCI, and SCI. The presence of an informant or caregiver informed about the subject’s daily living activities was mandatory for patients with MCI or dementia.

The control group included elderly participants without any complaint of memory loss or cognitive decline. The demographic characteristics of the control group were similar to those of the dementia group in terms of age, gender, and level of education.

After getting permission from ADI, both patient and informant questionnaires were translated and back translated into Persian by experts who were fluent in both Persian and English languages and were familiar with neuropsychology tests. During the test adaptation, the two words of “Boat and Fish” in delayed recall test were changed to “Knife and Sun”, because they have a semantic similarity and belong to the same category. Since both the words boat and fish belong to the same category, the authors conclude that the subjects may be able to memorize them and, hence, they were not suitable for the delayed recall test.

All steps of translation and adaptation were conducted under the supervision of a neurologist along with neuropsychological assessments.

The interviewers gathered the subject’s main demographic data such as age, gender, handedness, and ethnicity; the educational level was determined based on the number of years of formal education.

In the informant questionnaire, six questions were asked about subjects’ memory and cognitive status (scored 0 - 6).

Before CSI-D administration, the neurologist visited all the subjects and determined the final diagnosis based on clinical examination and para-clinical findings including laboratory tests, magnetic resonance imaging, etc.

All participants (or their companion or legal guardian) signed the informed consent form before enrollment in the study. Adequate informed about the study objectives was given to participants and they were also assured about their right to withdraw from the study at any stage. All the collected data were kept confidential and just the first author had access to them. All documents were stored in a secured place.

The distribution of literacy among the patients is shown in Table 1.

Table 1. Distribution of Educational Level Among the Study Groupsa

The participants were allocated to normal, SCI, MCI, and dementia groups.

Table 2. Cronbach’s Alpha for Both Genders and All Levels of Education

To assess the content validity, the brief CSI-D questionnaire was studied by neurologists and psychologists with expertise in neuropsychological assessment. They agreed that both parts of the questionnaire (patient and informant) were representatives of all aspects and characteristics of the original version of CSI-D.

The functional validity was approved using the Kaiser-Meyer-Olkin (KMO) index and the Bartlett sphericity test. The KMO index was 0.876 and significance level was 0.0, which indicated that the questionnaire items were correlated with each other.

To evaluate the concurrent validity, the Spearman correlation coefficient was calculated based on the results of the Persian version of brief CSI-D, the Montreal cognitive assessment (MoCa), and the mini-mental state examination (MMSE).

The Persian version of brief CSI-D was successful to differentiate healthy old subjects from their counterparts with cognitive impairment. The cutoff point in normal illiterate and low-educated subjects was 8 and 8.5, respectively, with high sensitivity and specificity. However, it failed to provide proper differentiation and cutoff point in subjects with SCI.

A valuable finding of the study was the good discriminatory power of the test to diagnose MCI with maximum sensitivity and specificity. The cutoff point among illiterate patients with MCI was 5 and among the ones with more than one year of education was 7.5.

The obtained cutoff point among illiterate, low-, and highly-educated subjects with dementia indicated that the level of education (i e, 6 to > 13 years) had no significant correlation with dementia diagnosis.

The AUROC for illiterate and low-educated subjects was 0.83; so the test could significantly discriminate cognitive impairments in illiterate communities.

The majority of people consider cognitive impairments as common age-related symptoms, especially at MCI stage. For instance, the participants with MCI had difficulty in delayed recall test, while their companion did not mention any significant changes about them.

The obtained results were consistent with those of studies from other countries such as Latin America, India, and China.

Early detection is an important factor to decrease the prevalence of dementia. In this context, diagnosis at MCI stage is very importan. Studies show a correlation between illiteracy and dementia (4, 5). Since memory loss is considered as a normal aging phenomenon, MCI diagnosis is of great importance among low-educated people. However, it is difficult due to the lack of a reliable test. The brief CSI-D is a reliable tool for screening dementia at community level. The study showed that the Persian version of brief CSI-D can detect MCI, which is an advantage in dementia screening among illiterate and low-educated population.