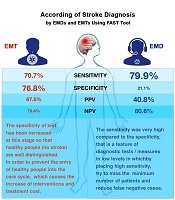 This study aimed to determine the accuracy of the Face-Arm-Speech-Time (FAST) screening tool used by emergency medical dispatchers (EMDs) and emergency medical technicians (EMTs) for the diagnosis of acute stroke and its effect on the patient’s transfer time from the scene to the hospital.

This study was conducted retrospectively during a one-year period. Via census sampling, we recruited all patients over 18-years-old diagnosed with acute stroke whether by EMDs or by EMTs. Pre-hospital operation forms and hospital records were used for data gathering. Final diagnoses were finally determined according to the patients’ brain magnetic resonance imaging (MRI).

The use of FAST by EMTs for detecting probable acute stroke has acceptable sensitivity and specificity; but when it is used by EMDs, it has higher sensitivity and very low specificity. The diagnosis of stroke by EMTs may lead to faster transport to the hospital.

Stroke is a major cause of death and disability in the working-age population (1). Eight of every 10 stroke patients are of the ischemic type, which is caused by the obstruction of a cerebral artery. In these cases, the blocked vessel can be opened by thrombolytic therapy or thrombectomy within a few hours of the onset of symptoms (2, 3). However, a few patients receive such treatments, which is mainly due to the delay in arriving at a hospital (4, 5). Emergency medical service (EMS) can play a vital role in this regard. It must quickly identify patients who are still within the golden time of recanalization treatments and transfer them to a hospital equipped with sufficient diagnostic and therapeutic capability (4, 6). The EMS personnel are usually the first professional people who deal with an acute stroke patient. The delay in the transfer of the patient to the hospital can be significantly reduced through the improvement of EMS personnel performance in this area (7).

The patients’ screening tool used by EMS is one of the effective factors in improving performance. Stroke detection in the pre-hospital phase has remarkably improved since the establishment of specific pre-hospital scales such as the Cincinnati Pre-Hospital Stroke scale (CPSS), Face-Arm-Speech-Time (FAST), and Los Angeles Pre-Hospital Stroke screen (LAPSS) (8, 9). The FAST and CPSS tools contain only three clinical items while LAPSS is more detailed and has a separate section for history taking and clinical examination. However, the overall efficiency of these three scales has been similar in comparative studies. Systematic review studies have not identified a superior diagnostic tool yet. However, many of the studies are criticized for their methodological errors, small sample size, and differences in incidence, prevalence, and pre-hospital operations (10). In spite of all these, FAST is one of the best tools in the pre-hospital screening of patients suspected of acute stroke (11, 12).

Since July 22, 2016, Iran has launched the system of “724” (providing specialized services for acute stroke patients 7 days a week/24 hours a day) in some hospitals and the activation code of SAMA (emergency stroke) using the FAST screening tool in pre-hospital centers. Its aim is to rapidly diagnose and screen patients suspected of acute stroke and to create more coordination between the pre-hospital system and acute myocardial infarction centers for faster transport of stroke patients (via air and ground transport) into centers with thrombolytic therapy facilities.

There has not been a comprehensive study on the accuracy of this tool in a real situation in Iran after running FAST for acute stroke screening.

Thus, this study aimed to determine the accuracy of the FAST screening tool used by emergency medical dispatchers (EMDs) and emergency medical technicians (EMTs) for the diagnosis of acute stroke and its effect on the patient's transfer time from the scene to the hospital.

This diagnostic accuracy study was conducted retrospectively based on a data registry. In this study, the patients’ data were collected during a one-year period from September 23, 2017, to September 23, 2018.

After calling 115, according to the existing algorithm and the tool of FAST, the EMDs start targeted interviews with the caller and then the nearest definite center will be announced. Emergency medical technicians (EMTs) immediately activate the SAMA code following the diagnosis of positive FAST symptoms. The necessary vital signs are taken and the transport of the patient will be announced to the definite hospital through the dispatch center. Patients with stable hemodynamics are sent to the computed tomography (CT) scan unit while patients with unstable conditions are sent to the emergency department (ED) and the treatment process will continue at the hospital.

Via census sampling, we included all patients over 18-years-old with suspected acute stroke based on the initial diagnosis made by EMDs, followed by EMTs. The selected patients had no history of trauma and had been transferred by the EMS personnel to three hospitals affiliated to the Iran University of Medical Sciences. The patients were excluded if their records were incomplete or the patient died before the arrival of paramedics. Based on previous studies (Williams et al. (13), Mould-Millman et al. (14)) and assuming a 50% sensitivity of the FAST tool in diagnosing acute stroke, a prevalence of 54% of stroke in suspected patients, accuracy of 95%, and a 5% error in sensitivity estimation, the minimum sample size required for this study was 710 cases.

Descriptive data were presented as mean ± standard deviation (SD) for quantitative variables and were summarized by absolute frequencies and percentages for categorical variables. Accuracy of a stroke diagnosis by EMDs and EMTs was assessed by the area under the ROC curve (AUC). Besides, we calculated sensitivity and specificity with 95% confidence intervals (CIs) for stroke diagnosis by EMDs and EMTs compared to the final diagnosis made at the hospital as the gold standard. Positive predictive value (PPV) and negative predictive value (NPV) with 95% CIs were calculated based on gold standard prevalence.

We used the independent t-test for assessing the effect of a stroke diagnosis by EMDs and EMTs on the mean of pre-hospital time. A P value of < 0.05 was considered statistically significant. All statistical analyses were performed using SPSS version 22.0 software (Armonk, NY: IBM Corp) and STATA version 14 (Stata Corp LLC).

Table 2. Frequency of Correct and Incorrect Initial Diagnoses of EMDs and EMTs Based on the Final Diagnosis Made at the Hospitals Along With Accuracy and Predictive Value

According to the findings of this study, FAST had acceptable sensitivity to stroke detection, but its specificity, especially when used by EMDs, was very low. However, this flaw was partially resolved when the tool was used by EMTs in the scene. Besides, the results showed that stroke detection by EMDs did not have an effect on the reduction of any pre-hospital times. On the contrary, stroke detection by EMTs was associated with reduced transport time.

We observed that EMD’s sensitivity was more than that of EMTs (79.9% vs. 70.7%). On the other hand, EMT’s specificity to detect acute cerebral stroke was higher than that of EMDs (76.8% vs. 21.1%). It was expected that the sensitivity of the test in telephone calls and the use of the tool by EMDs were higher, subsequently, the EMTs, according to the requirements of this stage, in order to prevent healthy people from entering health care cycle, the test’s specificity was increased so that healthy people do not enter the process of treatment.

Comparing the FAST’s validity features with previous study findings, Zhao et al. (15) found that the sensitivity, specificity, and PPV of EMS personnel were 85.7%, 93.5%, and 80%, respectively, using FAST for the diagnosis of acute stroke in the pre-hospital emergency. Therefore, their study found more sensitivity and specificity than our study (15).

The FAST tool has some limitations in detecting an acute stroke. In the study by Aroor et al. (17), 104 out of 736 (14.1%) patients diagnosed with acute stroke did not have any symptoms of FAST. The BE-FAST test (B for Balance and E for Eye) could be used considering the fact that most of these patients had an imbalance and visual impairment. Thus, using BE-FAST, 4.4% of patients did not have BE-FAST symptoms (17). Therefore, we can add more symptoms to FAST, but it requires staff training and increases the number of healthy people who receive health care. In addition, in a study by Pickham et al. (18), adding balance and double vision to FAST did not increase the diagnosis of stroke in the pre-hospital emergency. However, further studies are required in this field considering the discrepancy of the results of research.

The use of FAST by EMTs in detecting acute stroke has an acceptable sensitivity and specificity and it can be used as a screening tool for acute stroke in pre-hospital emergency settings (Figure 1). Accuracy indices in the diagnosis of stroke by EMDs showed that sensitivity was very higher than specificity that is a feature of diagnostic tests/measures in low levels in which by placing high sensitivity, we try to miss the minimum number of patients and reduce false-negative cases. On the other hand, the low specificity of this tool when used by EMDs caused over-triage, which may lead to diminishing the EMT’s sensitivity to SAMA noticed by the dispatch center; thus, the response time did not significantly differ. This issue requires attention and training. The validity indices in the diagnosis of stroke by EMTs show that the specificity of the test has increased at this stage so that healthy (non-stroke) people are well distinguished. To prevent the entry of healthy people into the care cycle, which increases the intervention and treatment costs, it is necessary to increase the specificity of tests/measures. We would like to express our gratitude to hospitals and EMS staff who helped us in conducting this study. We also have to thank Dr. Ensieh Ghaffari Shad for preparing the medical illustration of this paper.