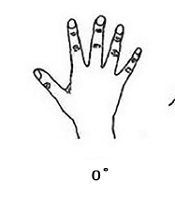 In the hand mental rotation task, images and line drawings of hand at different angles are shown to the subjects, and they are asked to choose which hand (left or right) it is. Tactile stimulation is an appropriate technique to improve sensory and motor functions.

The present study aimed to investigate the impact of tactile stimulation on the hand mental rotation task.

To meet the study objectives, 91 right-handed university students were selected to participate in this study. They were randomly divided into control (n = 41) and tactile stimulation (n = 50) groups. Participants were asked to perform a hand mental rotation task before and after tactile stimulation. The task required participants to judge the laterality (left or right) of hands as quickly and accurately as possible. The tactile stimulation was applied to the right index fingertip (16 Hz for 30 min).

The mental rotation task is a cognitive dynamic process for comparing or identifying objects or body limbs in different or canonical orientations, where there is a need for mental rotation stimulus to align with a reference (1). Mental rotation typically refers to imagery processes (2) that can be accomplished by several strategies, including visual imagery and motor imagery (3). In the mental rotation task, a mental image is rotated along a continuous trajectory until reaching a new orientation (4). Hand mental rotation, which is commonly evaluated in the hand laterality judgment task, is known as implicit motor imagery because it does not depend on conscious imagery for a movement (5). The results of previous behavioral studies indicated that participants’ reaction time in the laterality judgment task was proportional to the time of actual hand movement in the stimulus position (6). The reaction time is typically longer than the larger angle difference between the stimulus direction and vertical orientation (4, 7). In the hand mental rotation, longer response time is obtained in situations where it is more difficult to achieve physically.

Neuroimaging studies of hand mental rotation tasks suggest that successful task processing relies on the integration of specific cortical-subcortical motor systems such as motor and premotor areas and basal ganglia that are involved in planning and performing the movement (4, 8). The process of mental rotation of body limbs shares similar or even identical brain activity with that of, which occurs during the actual movement of those body limbs (9). Several brain imaging studies have shown that mental rotation tasks can activate both motor-related areas, such as the premotor and supplementary motor areas and the posterior parietal areas involved in spatial processing. Studies have shown that both the primary and general motor areas are included in mental rotation, in particular, the supplementary motor area, precentral gyrus, inferior parietal lobule, superior parietal lobule, and premotor cortex (10, 11). Mental rotation training is used for neurorehabilitation purposes focusing on motor imagery strategies in patients with motor-related injuries (12). Therefore, if this ability can be enhanced in a non-invasive manner, it will be effective in patients’ recovery.

The experiments in this study were conducted in 2018 at the Shiraz University of Medical Sciences, Iran. The statistical population of the study included 91 university students (22 males and 70 females) from the Shiraz University of Medical Sciences, who had a normal or corrected-to-normal vision, were right-handed and had an average age of 21.20 years (SD = 2.6 years; range = 18 to 24 years). Participation in this study was voluntary. The students were recruited by public notifications in the university.

Informed consent was obtained from all eligible participants. The protocol was approved by the local ethics committee [Rafsanjan University of Medical Sciences, Iran (permit number: IR.RUMS.REC.1396.59)]. All participants were checked for history or current presence of any significant neurological/medical or psychological conditions that may impact cognitive functioning. Volunteers with psychiatric/neurological diseases and drug use were excluded from the study. After the hand mental rotation task was explained to the participants; they were randomly divided into two control (n = 41) and tactile stimulation (n = 50) groups. Both groups initially performed a seven-minute hand mental rotation task (pretest). Then, in the intervention group, a 30-min tactile stimulation was applied over the right index finger. For the control group, the tactile stimulation device was turned off during the 30-min intervention. Next, they were asked to re-perform the hand mental rotation task (posttest).

By performing the hand mental rotation task, the implicit mental imagery of upper limbs was assessed in the participants. First, the hand mental rotation task was developed in PSYTASK software, and Paint software was used to provide images at six different angles (0º, 60º, 120º, 180º, 240º, and 300º). Two hand positions (palm and back) and two hand sides (left and right) were displayed for each angle, and each image was taken in triplicate (a total of 72 images). An example of right-hand back images at different angles is shown in Figure 1.

The task lasted about seven minutes. The images were randomly presented by the software to reduce the learning effect. Before the images were displayed on the center of the screen, a plus sign (+) was shown to let the user know what part of the screen to look at. Before starting the main task, the participants received complete information about the task and knew that both the reaction time and the number of correct responses would be recorded in the software. The reaction time was recorded in milliseconds (the time lag between the emergence of the stimulus and the subject’s correct responses to items), and the percentage of correct responses showed the subject’s response accuracy rate (19).

Data (reaction time and response accuracy rate) were collected from two groups (control and intervention) in a mental rotation task (images with six different angles: 0º, 60º, 120º, 180º, 240º, and 300º) and two hand sides (left and right) across two time periods (pretest, posttest). The data were analyzed by paired t-test to compare the groups before and after the intervention and independent t-test to compare the variables between the two groups. In the case of non-normal distribution, the nonparametric equivalent tests, including the Mann Winnie U test and Wilcoxon test, were used.

There were 50 participants in the tactile stimulation group and 41 in the control group. All participants in both groups had a bachelor’s degree. The two groups were compared for homogeneity in terms of age (P = 0.746) and gender (P = 0.412) variables, which showed no significant difference, as seen in Table 1 (P > 0.05).

Table 1. Comparison of Age and Gender in Tactile Stimulation and Control Groups

The independent t-test results showed that the mean posttest reaction time was lower in the tactile stimulation group for the right hand (P = 0.322), left hand (P = 0.555), and both hands (P = 0.506) than in the control group, but not statistically significant.

Table 3. Comparison of the Mean Difference in Posttest-Pretest Reaction Time and Response Accuracy Rate for Right and Left Hands in Tactile Stimulation and Control Groups

The Mann-Whitney U test results demonstrated that the mean response accuracy rates in the posttest for the right hand (P = 0.157), left hand (P = 0.194), and both hands (P = 00.189) were higher in the tactile stimulation group than in the control group, but not statistically significant (Table 2).

The main objective of the current study was to investigate the effect of tactile stimulation on hand mental rotation abilities of young, healthy adults. The results revealed that the implementation of tactile stimulation in the right index finger for 30 min, could improve the hand mental rotation ability, evidenced by increased response accuracy rate and response speed.

However, longer follow-ups of this effect and increased stimulation duration or location should be investigated in future studies. In addition to the motor imagery ability assessment, the motor function examination after tactile stimulation can also strengthen the study. In addition, cortical activity using event-related potential before, after, or during tactile stimulation can be investigated in future studies.