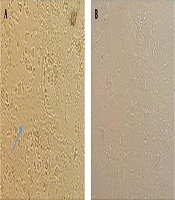 The Measles virus (MV) as a causative agent of measles belongs to the genus Morbillivirus in the family Paramyxoviridae and contains a nonsegmented genomic single-stranded RNA with minus-sense (1, 2). The measles virus, like other members of this family, is an enveloped virus in which the viral RNA, along with nucleocapsid (N) proteins, is present in the form of ribonucleoprotein (RNP). The viral polymerase complexes containing the phospho (P) and large (L) proteins are associated with RNPs. The genomic negative-sense RNA encodes six transcription units, called N protein, P, V, and C (P/V/C) proteins, matrix (M) protein, fusion (F) protein, hemagglutinin (H) protein, and L protein from the 3’ to 5’ end, in sequence (3, 4). For the first time, the Edmonston B strain as an attenuated MV was produced after a constitutive passage of Edmonston strain on primary human kidney and amnion cells and adaptation to chicken embryo fibroblasts (CEF). In 1975, the Edmonston B vaccine was abandoned because of being reactogenic. Then, the Edmonston B strain was replaced by other attenuated vaccine strains, including Schwarz/Moraten, Zagreb, and AIK-C (5, 6). By now, MV vaccine strains have been used worldwide, and they showed to produce safe and efficacious vaccines to prevent measles. The MV vaccine strains are very stable genetically, as a genetic reversion to pathogen strains has not been found. On the other hand, the MV vaccine strains can induce long-lasting protection and elicit protective antibodies and cellular immunity (5, 7-12).

The rescue of MV through reverse genetics from cloned full-length antigenome cDNA was first achieved by Radecke et al. (13) in 1995. They developed a helper cell line (HEK293-3-46) that stably expresses T7 RNA polymerase, as well as N and P proteins of MV to make viral RNPs from transcribed RNA. Then, reverse genetics was used to rescue other MV vaccine strains by co-transfection of MV antigenomic cDNA plasmid into the HEK293-3-46 cell line (6, 14). On the other hand, some studies could rescue the MV through transient expression of viral N and P proteins, as well as T7 RNA polymerase (15, 16).

Here, the MV antigenomic sequence of AIK-C strain was synthesized for use in the rescue of a recombinant MV vaccine strain vector. Transient expression of helper proteins containing T7 RNA polymerase and N and P proteins of MV by tricistronic expression plasmid was illustrated to be efficacious for the rescue of recombinant MV vaccine AIK-C strain. It seems that concomitant expression of three helper proteins into cells could optimize the formation of viral RNPs after the transcription of antigenomic RNA.

Schematic diagram of cloned antigenomic cDNA of the MV AIK-C vaccine strain into the pUC57 plasmid. The recombinant plasmid named pAIKc-rMV contains accessory elements, which is preceded by the T7 RNA polymerase promoter and Hammerhead (HH) sequence and is ended by ribozyme delta (RD) T7 terminator (T7 ter) sequence. Three additional transcription units (ATUs) were included between the N and P genes, P and M genes, and F and H genes. After transfection of the construct into HEK-293 cells in the presence of T7 RNA polymerase, the antigenomic viral RNA could be transcribed.

The cells were incubated at 37°C under 5% CO2 condition.

The rescue of recombinant MV vaccine AIK-C strain was performed by co-transfection of three plasmids consisting of pAIKc-rMV (as MV antigenomic cDNA), pT7N1P5 (as the expression plasmid encoding T7 RNA polymerase and MV N and P proteins, as previously described), and pEMC-La (as MV RNA polymerase L, kindly provided by H.Y. Naim). Briefly, HEK-293 cells were maintained at 70% confluency in six wells of cell culture plates with 10% FBS in the absence of antibiotics. A plasmid mixture of pAIKc-rMV (1.2 µg), pT7N1P5 (1 µg), and pEMC-La (0.4 µg) was co-transfected into HEK-293 using lipofectamine 2000 (invitrogen).

For RT-PCR, the culture supernatant from transfected HEK-293 cells was used to infect Vero cells to increase the viral titer of the rescued virus. The viral genomic RNA was extracted from 300 µl of the supernatant of transfected HEK-293 cells and infected Vero cells using TRIZOL (Invitrogen) according to the manufacturer’s instruction. Then, reverse transcription was done for DNase-treated RNA samples by random hexamer primers. Briefly, 12 µL of extracted RNA was added to RT mixtures containing random hexamer primers, incubated at 80°C for 10 min, and then placed on ice for 5 min. Next, the second reaction buffer was added to the previous mixture and incubated at 42°C for 70 min. Finally, the RT reaction mixture was incubated at 85°C for 10 min to inactivate the enzyme. For the amplification of MV cDNA, two sets of primer pairs, one containing MV3’-F and MV3’R and the other containing MV5’F and MV5’R, were designed to amplify 184 bp and 392 bp fragments located at the Noncoding region of the 3’ and 5’ ends of the MV AIK-C strain genome, respectively (Table 1). Briefly, for each sample, the PCR was performed in a 20-µL reaction volume containing 5 µL synthesized cDNA, 4 µL PCR master mix, and 10 mM of each primer. The PCR amplification was done under the following condition: Primary denaturation at 95°C for 10 min, followed by 30 amplification cycles consisting of denaturation at 95°C for 15 s, annealing at 60°C for 15 s, and extension at 72°C for 30 s, and one cycle of final extension for 7 min.

Table 1. Primers Sequence for Detection of 3’NCR and 5’NCR of Measles Virus Genome

The cDNA sequence of AIK-C vaccine strain of MV together with all accessory elements consisting of T7 promoter and hammerhead located before viral antigenome and hepatitis delta ribozyme sequence along with T7 terminator added to the end of the viral antigenome, as well as ATUs, which were cloned into pUC57, were used to rescue the MV vaccine AIK-C strain. To transcribe the viral antigenomic RNA and encapsidate it for the production of viral RNP associated with viral P protein in HEK-293 cells, the co-transfection of pAIKc-rMV (containing viral antigenome) with a tricistronic expression plasmid (named pT7N1P5), was carried out. The tricistronic expression plasmid accommodated three genes consisting of T7 RNA polymerase and MV N and P genes. The T7 RNA polymerase sequence was located at the downstream of CMV promoter since high expression was necessary for the enzymatic activity of T7 RNA polymerase. The MV N and P genes were cloned under the control of IRES sequence for the equivalent expression of them. In principle, the tricistronic plasmid could ensure the concomitant expression of three genes in cells as helper proteins. To establish the reverse genetics system to rescue the AIK-C strain, the pAIKc-rMV, pT7N1P5, and pEMC-La plasmids were co-transfected into HEK-293, which resulted in the formation of a vast cytopathic effect (CPE) five days post-co-transfection (Figure 2A). It seemed that the concomitant expression of the three genes included in the tricistronic expression plasmid could increase viral RNPs in co-transfected cells. The co-cultivation of transfected HEK-293 with Vero cells resulted in the observation of the viral CPE four days post-co-culture (Figure 3A). On the other hand, to confirm the induction of viral CPE in Vero cells, the Vero cells were infected with the rescued recombinant AIK-C vaccine strain. Here, the MV vaccine AIK-C strain could start to induce the viral CPE three days post-inoculation.

A, Measles virus rescue after co-transfection with pAIKc-rMV, pT7N1P5, and pEMC-La visualized with vast syncytia formation (shown by arrow) after five days; B, negative control of HEK-293 cells transfected with pAIKc-rMV and pT7N1P5 plasmids.

To monitor the MV production, the supernatant of co-transfected cells after the formation of viral CPE, and to detect MV after the inoculation of the virus in Vero cells, the RT-PCR was done by two sets of specific primers targeting 3’NCR and 5’NCR of the MV genome. The results of RT-PCR amplification were positive in either of co-transfected HEK-293 cells, the MV rescued from the co-culture system, and 175 inoculated Vero cells (Figure 4). 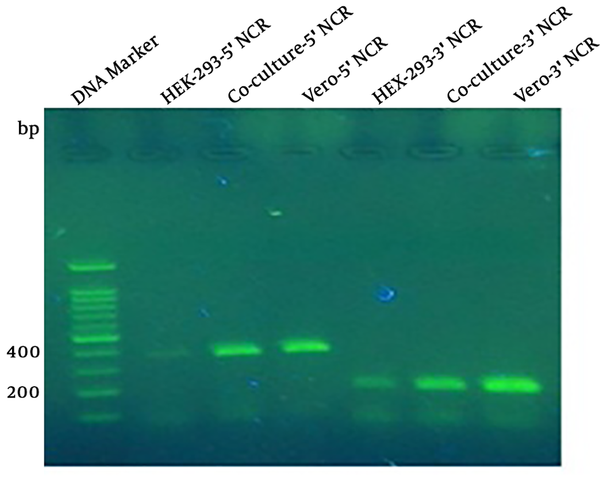 For the first time, reverse genetics for the rescue of MV Edmonstone strain was done by Rodecke et al. (13) in 1995. They illustrated that the MV could be rescued from antigenomic but not genomic cDNA in the helper cell line (HEK 293-3-46), which expressed stably T7 RNA polymerase enzyme and MV N and P proteins. After that, many studies were published on the rescue of different strains of MV vaccine strains.

Here, we tested the tricistronic expression plasmid for the rescue of MV AIK-C vaccine strain from antigenomic cloned cDNA. Our results showed the successful rescue of recombinant MV AIK-C vaccine strain, called pAIKc-rMV, by tricistronic expression plasmid through the formation of several cytopathic effects (syncytia). These results were possibly due to the presence of either of the three proteins concomitantly in per cell, which was accompanied by an efficient formation of viral RNP.

Finally, because of the accommodated ATUs in antigenomic cDNA of AIK-C vaccine strain, which has a capacity of incorporating foreign transgenes, the pAIKc-rMV can be used as a viral vector for expression of antigens from other viral pathogens. In general, similar to several previous research that demonstrated the MV as a potent vector to express foreign antigens, the MV in this study could also express inserted genes in ATUs (5, 14, 22-27). Regarding the previously published literature that demonstrated MV could induce neutralizing antibodies and an efficient immune system against SARS coronavirus (25, 26), here we can use the ATU to include the SARS coronavirus-2 S antigen and assess the immune response against it.

As the MV has documented to infect macrophages and dendritic cells to induce stable immunity against the MV (28), using the recombinant attenuated MV AIK-C vaccine strain as a viral vector for the expression of other viral antigens will allow us to elevate the possible achievement for vaccine targets in the case of highly pathogenic viruses such as HIV, avian high pathogenic influenza virus, HCV, SARS coronavirus-2, and some of the arboviruses.