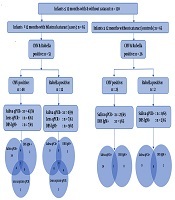 Cataract is the commonest cause of childhood blindness in sub Saharan Africa (SSA). The significance of congenital rubella and human cytomegalovirus (HCMV) infection in the etiology is not known.

We aimed to investigate prevalence of both viruses in cases of congenital cataract and controls.

Lens tissue was collected (from cases), blood and saliva from cases and controls. Using ELISA, we tested blood samples for rubella and cytomegalovirus IgM. Quantitative polymerase chain reaction (qPCR) was also used for detection of the viruses.

Although most of the children in the study presented too late to be sure that infection was congenital, our study strongly suggests that HCMV and rubella infection appear important causes of congenital cataract in Tanzania hence virology testing of infantile cataract cases may be useful in assessing effectiveness of immunization programs as they are established throughout SSA.

Cataract is the commonest cause of childhood blindness in Africa. The importance of rubella and human cytomegalovirus (HCMV) infection in etiology is unknown in this setting. Acquired HCMV infection is common in almost all socio-economic settings, particularly in lower socioeconomic groups, with evidence that over 80% of African adults are IgG seropositive for HCMV, including women of child bearing age (1, 2). HCMV has been reported to be the commonest global congenital infection with an overall birth prevalence of 6 - 7 per 1000 births (3) and is an important cause of sensorineural hearing loss and neurodevelopmental problems in childhood (4). An association with congenital cataract has been shown in India (5). However, the relationship between HCMV infection and congenital cataract has received little attention in Sub-Saharan Africa.

Rubella virus has been diagnosed in the lens in congenital cataracts using PCR (6) and the virus has also been isolated (7) but to our knowledge PCR has not previously been used to test lens aspirates for HCMV.

In this case-control study we recruited infants with bilateral cataract up to the age of 12 months, who attended three major tertiary care facilities in Tanzania from November 2016 to August 2017: KCMC Hospital (Kilimanjaro), Comprehensive Community Based Rehabilitation for Tanzania (CCBRT) Disability Hospital (Dar es Salaam) and Muhimbili National Hospital (MNH) (Dar es Salaam). All children underwent preliminary evaluation for study eligibility (as potential cases or controls) by pediatric ophthalmologists (GF, JM, PN, and SV) prior to enrolment. All children less than 12 months of age with bilateral significant cataract were eligible as cases.

Controls were children less than 12 months of age without cataract or obvious ocular pathology and/or any other systemic problems. They were selected from population of children less than 5 years of age attending reproductive and child health clinics for routine immunizations and nutrition check at the same hospitals. Case and control groups were all age-matched. Only cases were assessed for anemia using Haemo Control Hemoglobin Analyser. Haemoglobin level less than 7.0 g/dL were classified as severe anemia, 7.0 to 9.9 g/dL as moderate anemia and 10.0 - 10.9 g/dL as mild anemia (8). Birth weights were recorded; low birth weight was defined as ≤ 2.5 kilograms (9). Cases were also assessed for co-morbid eye diseases (microphthalmos: corneal diameter < 9.5 mm and/or axial length < 17 mm, nystagmus, and retinopathy) by ophthalmologists, and for systemic abnormalities (delayed milestones, congenital heart defects, prematurity and other malformations) by a paediatrician. Developmental milestones were evaluated using a milestones chart designed specifically for staff providing services for children (10), and apparent delays were recorded.

During cataract surgery paediatric ophthalmologists collected lens tissue from one eye, and saliva samples and dried blood spots (DBS) from eligible cases. Paediatric ophthalmologists also collected saliva and DBS from eligible controls. DBS were collected from a heel prick using contact-activated lancets (BD Microtainer, Becton Dickinson) and were air-dried. Once dry, DBS were stored at -20°C until analysis. Following surgical extraction, lens tissue specimens from cataract cases were placed in 1 mL of RNAlater® (Invitrogen) and stored at 4°C overnight, then at -80°C until RNA/DNA extraction. Saliva samples from cases and controls were collected from the buccal mucosa using a sterile polyester-tipped cytobrush (SLS) and were stored in 400 µL RNAlater® at 4°C overnight then at -80°C until RNA/DNA extraction. The cytobrush was inserted into the child’s mouth between the cheek and teeth of the lower jaw and rotated five times so that it was fully coated in saliva.

Lens tissue samples were thawed, centrifuged for one minute and the supernatant discarded. Two hundred microliters of phosphate buffer saline (PBS) was added and the sample was transferred to a sterile Biomasher II® micropestle (Kimble Chase). The tissue was manually disrupted for one minute on ice, then centrifuged briefly to pellet cell debris. Two hundred microliters of supernatant was extracted using the QIAamp Cador (Qiagen) pathogen mini kit. Saliva samples were thawed and the cytobrush was transferred to a 2 mL tube containing 200 µL PBS. Tubes were vortexed for one minute and centrifuged briefly, following which the brush was discarded and the sample was vortexed for another minute. The sample was pulse centrifuged and 200 µL of supernatant was extracted using the QIAamp Cador pathogen mini kit following the manufacturer’s instructions.

Pearson’s chi-square test analysis was used to compare the difference in distribution of rubella and HCMV infections between cases and controls. Birth weight was categorized into four levels (< 2.0 kg = severe low birth weight, 2.0 - 2.5 = moderate low birth weight, and > 2.5 kg = normal birth weight) and was compared using chi-square tests. All plausible factors associated with HCMV and rubella infection (exposure variables) were tested in univariate analyses and a multivariate model. All these variables were treated as categorical variables. Simple linear regression was performed to show the relationship between age and HCMV saliva concentrations in cases and controls. 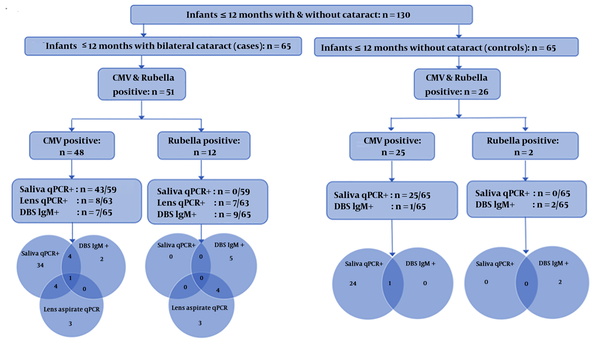 Table 1. Age at Surgery vs. HCMV in Saliva, Lens and DBSa

The mean concentration of HCMV DNA in saliva was higher in younger (855 copies/µL) than older infants (106 copies/µL; t-test, P < 0.001) overall, both cases (1,064 copies vs 165 copies/µL; P = 0.005) and controls (437 copies/µL vs 10 copies/µL; P = 0.0004). There was strong evidence (P = 0.005) that younger cataract cases had higher saliva HCMV DNA concentrations than younger controls. A similar effect was also observed in older infants, however the numbers were too small and the variability too high to draw strong conclusions (Figure 2). 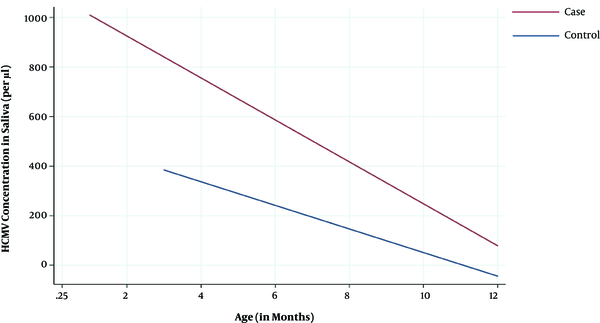 HCMV log saliva concentration vs. age at sample collection in the study population

In cases, no clinical associations with infection were seen other than microphthalmos (Table 2). In all cases with positive lens virology, the types of cataract were diffuse/total or nuclear, except one case of rubella where the cataracts were lamellar. Evidence was found that cataract cases had smaller birth weights (mean = 2.8 kg) than controls (mean = 3.2 kg; P = 0.004). This difference remained after excluding infants with positive lens virology (P = 0.02) and those born preterm (defined as less than 37 weeks gestational age) (P = 0.04).

In our study nearly a third of controls had HCMV DNA in saliva which was far higher than the 0.5% reported (11) in a study of neonates in the United States, and in the Gambia, where urine samples from 5.4% of healthy newborns were qPCR positive for HCMV DNA. However, these studies are not comparable, as our controls were aged up to 12 months of age, and did not include newborns. Our high prevalence of HCMV in controls suggests high rates of early-acquired and/or congenital HCMV infection. The increasing prevalence of saliva PCR positivity with age indicates that our study population is commonly acquiring CMV infection during the first year of life. The declining concentration of virus DNA with age suggests that some of the control group had congenital infection.

Since acquired infection with HCMV is very common during the first year of life in Africa (12), particularly with maternal immunosuppression (2), the case control design of this study was important. Cataract cases had a higher prevalence of HCMV detection as well as higher viral load compared to controls. The higher rate of HCMV in cases than in controls is likely due, at least in part, to congenital HCMV infection, since early-acquired infection is not associated with infantile cataract to our knowledge. HCMV IgM seropositivity was more common in younger patients whereas HCMV PCR positivity was more common in older infants. It is possible that early-acquired infection and associated immune modifications (11) in neonates or infants could also cause or affect cataract development.

The higher rate of HCMV detection relative to rubella in cases and controls in this study is similar to a study in India (13). The association between intrauterine viral and parasitic infections and congenital cataract is well known (14) but the mechanism is unclear. Evidence shows that HCMV infection is associated with increased oxidative stress (15), which in turn is associated with an increased risk of cataract (16).

Detection of rubella-specific IgM in cataract cases (13.8%) was higher than in controls (3.1%) and was slightly higher than in a study (5) in India (8.4%). The IgM positive controls in this study could represent (as for HCMV) early acquired infection or subclinical congenital infection.

Salivary IgM has been successfully used to detect rubella in congenital cataract cases in India (17); we did not detect rubella RNA in the saliva of any study participants. Serum IgM testing for congenital rubella is most sensitive up to 3 months (18) but salivary IgM persisted to 6 months in all cases and to 14 months in the majority of a small series in India (19). Acquired rubella infection can be diagnosed by detection of rubella RNA in oral fluid by RT-PCR, but to our knowledge, salivary RT-PCR has not previously been used to diagnose CRS. The WHO recommends that samples for CRS testing should be collected in the first 3 months of the infant’s life, as approximately 50% of affected infants do not shed virus after this age (20). In our study, infants were tested at varying ages below 12 months and therefore some congenital infections that were already cleared could have been missed.

There was also evidence of HCMV and rubella co-infection in this study, 9/65 cataract cases (13.8%) were dual positive. This is close to that reported in 2010 in India (5), where co-infection with more than one infectious agents were detected in 12.5% in infants and children with congenital cataract.

Our study shows that the cataract cases had lower birth weights than controls, which has also been reported in United States (21), and this difference remained after excluding cases and controls who were born preterm and those with positive lens virology. This suggests that low birth weight may be an independent risk factor for congenital cataract. There are many causes of intrauterine growth retardation but most often reflect poor maternal nutrition (22), or lack of oxygen supply to the foetus (23). Nutritional deficiency, which causes foetal growth restriction, may also be implicated in the aetiology of congenital cataract (24).

Our data suggest that congenital infection with rubella or HCMV is an important cause of congenital cataract (bilateral) cases in infants/children in Tanzania. Virology testing of these cases may be potentially useful in assessing the effectiveness of immunization programs as they are established throughout SSA. Neonatal screening for congenital HCMV infection may be worth considering, and the development of cytomegalovirus vaccines is an active area of research which is challenging (25) but offers promise for the future (25).

I would like to acknowledge the Queen Elizabeth Diamond Jubilee Trust for supporting this project. Grant number ITCRZC6813 supported the project. MJB is supported by the Wellcome Trust (no.: 207472/Z/17/Z).