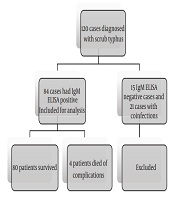 Scrub typhus is an important cause of acute undifferentiated fever. It is currently one of the most covert re-emerging infections and the most common rickettsial infection caused by Orientia tsutsugamushi. Untreated cases can have mortality rates as high as 30-35%.

This study was done to study demographical data, clinical profile, and predictors of outcome for scrub typhus in children who were admitted to our institution, a tertiary care hospital in south India.

A total of 120 patients were identified, of whom 84 (42 males- and 42 females) cases satisfied the inclusion criteria and were analyzed. About 80 (95%) cases had a complete recovery, whereas 4 patients (5%) died of multiple complications. Hypotension, hypoxia, altered sensorium, hypoalbuminemia, elevated liver enzymes, azotemia, and deranged coagulation on admission were considered as poor predictors of outcome for scrub typhus.

Pediatric scrub typhus is a common infection and should be suspected in cases with fever for more than 5 days and non-specific signs and symptoms. Early detection and timely management lead to a higher recovery rate. Hypotension, hypoxia, azotemia, altered sensorium, and bleeding manifestations on admission were associated with unfavorable outcomes.

Scrub typhus is an important cause of acute undifferentiated fever (1). It is the most common Rickettsial infection caused by Orientia tsutsugamushi. It is also a mite-borne tropical disease, which is transmitted by the bite of a chigger, a larval stage of Leptotrombidium mite (2, 3). Scrub typhus is currently one of the most covert re-emerging infections. During 2012, outbreaks of scrub typhus were reported from many states in India. Over the years, the number of samples and areas, where scrub typhus was detected has increased. The National Centre for Disease Control at its Zoonosis Division received 742 samples from suspected cases for scrub typhus from 11 states, and 202 samples (27%) were found positive. In 2011, the number of samples received was 484, and in 2010, these were 204 samples (4-7). Untreated cases can have mortality rates as high as 30% - 35% (8). The greatest challenge to a paediatrician is the difficulty in the diagnosis since it has non-specific clinical presentation resembling many of the common diseases, like dengue, malaria, enteric fever, leptospirosis, etc. (9, 10). When diagnosed timely, it can be treated with specific antibiotic therapy, which is most effective (11). Although scrub typhus is prevalent in different regions of the country, there has been a resurgence of scrub typhus in South India in the past few years (9-13). Scrub typhus is one of the Rickettsial diseases observed commonly. The term scrub is used because of the type of vegetation (terrain between woods and clearings) that harbors the vector. The infection is found in a wide range of ecological conditions, such as primary jungles, semi-desert, mountain desert, alpine meadows of Himalyas. Scrub typhus is known to be prevalent in foothills of the Himalayas, like Jammu and Kashmir, Sikkim, Manipur, Nagaland, Meghalaya, Himachal Pradesh, etc. The disease has also been reported from Tamilnadu and Kerala. However, the current samples are being tested positive from Delhi, Haryana, Rajasthan, Maharashtra, Uttrakhand, and Chhattisgarh (7). Many cases of scrub typhus have been reported in Tamil Nadu, where a limited number of relevant studies have been conducted. There are only a few studies on pediatric scrub typhus despite the epidemiological mention of children constituting up to half of scrub typhus cases in some regions (14-18).

This study was done to assess the demographical data, clinical-laboratory profile, and predictors of outcome for scrub typhus in children in a tertiary care hospital located in south India.

This is a retrospective descriptive study of patients with scrub typhus admitted to the pediatric intensive care unit (16 bedded with a tertiary level of care) of our hospital. The study was conducted for a period of 2 months after seeking institutional ethics committee approval. The study group included patients aged 1 month to 18 years from January 2012 to June 2019. The list of patients with the diagnosis of scrub typhus within the pediatric age group over the last 7.5 years was obtained from the medical records department. From the list, only cases who were positive for IgM enzyme-linked immunosorbent assay (ELISA) for scrub typhus were included in the study, and those who were tested negative for IgM ELISA for scrub typhus were excluded. Also, children with undifferentiated fever who were positive for IgM ELISA for scrub typhus with other co-infections, such as dengue, leptospirosis, malaria, and enteric fever, confirmed by appropriate laboratory tests were excluded from the study.

In this retrospective descriptive study, we collected the demographical data, clinical data, management, and complication details, and the information was recorded on a proforma. The data were then analyzed using SPSS software for statistical significance.

The demographic data included the patients’ name, age, sex, and address. The anthropometric data, such as height, weight, body mass index, were also collected. The length of hospital and pediatric intensive care unit (PICU) stays was noted. The signs and symptoms presented were collected and analyzed. Specific signs, like eschar, if presented, were noted. All the systemic findings, vital signs, and laboratory test results were collected from the case records and recorded.

Then, the relevant data regarding the management, such as mechanical ventilation, fluids and inotropes, blood products, antibiotics, and other indicated medications were included. The time needed for defervescence after starting doxycycline was recorded. Finally, the complications that had occurred, and the outcomes were noted for analysis.

One hundred and twenty cases with the age range of 1 month to 18 years, diagnosed with scrub typhus according to the list provided by the medical records department, were found. Based on the serology results, 21 cases had co-infections, such as dengue predominantly, malaria, enteric fever, and leptospirosis were excluded from the study. In about 15 cases, the IgM ELISA serology for scrub typhus caused by Orientia tsutsugamushi was negative. Totally, 36 cases were excluded from the study. Therefore, after the exclusion, 84 cases were studied (Figure 1). 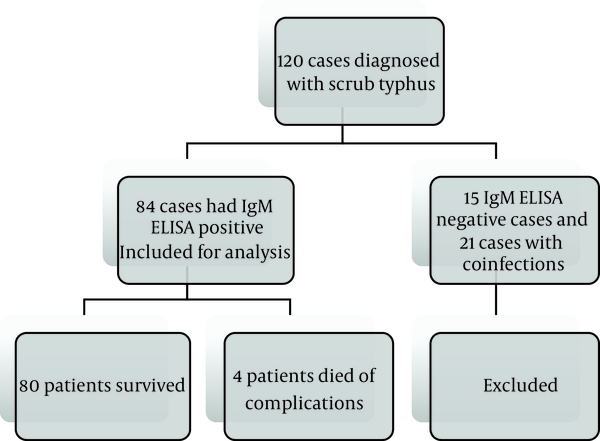 The majority of infections had been occurred from September to December (Figure 2), and the maximum number of cases were witnessed during 2012 (Figure 3). There was no male: female predisposition. The maximum number of patients (32, (38%)) were in the age group of 12 to 18 years, followed by 5 to 12 years (24 (28%)). Most of the cases reported in our institution were from Chennai and Neyveli. 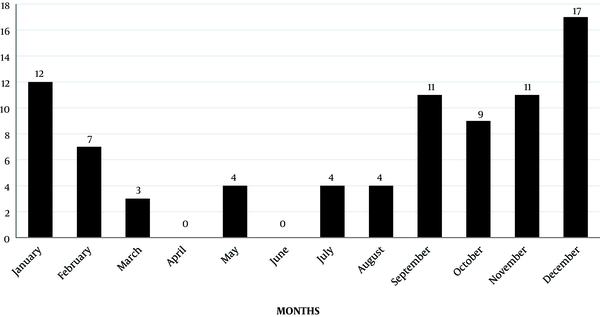 Graphical representation of the month-wise distribution 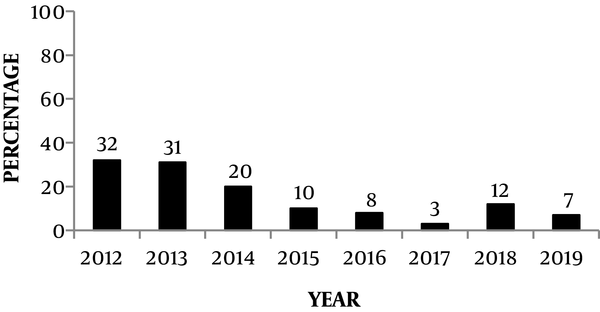 Graphical representation of the year-wise distribution

Fever was the predominant symptom seen in all the 84 patients (100%). Therefore, it was analyzed in detail, considering the grade, character, duration, and percentages. High-grade fever (69 (82%)) and intermittent fever (62 (74%)) with a duration of more than 5 days (78(93%)), were the most common fever patterns noted in our study.

The children also presented with varied symptoms, which were similar to the common presentations of other acute febrile illnesses, like dengue fever, malaria, leptospirosis, enteric fever, etc. In our study, eschar was identified among 31 patients (37%). The demographic and clinical parameters of the study participants are depicted in Tables 1 and 2, respectively.

Table 1. Sociodemographic Profile of the Participantsa

Table 2. Clinical Profile of the Participantsa

Doxycycline is the drug of choice, which had been given to children at a dose of 2.4 mg/kg twice a day for 5 to 7 days. Intravenous azithromycin had been given to critically ill children. In addition, the children had received other supportive measures, like intravenous fluids, antipyretics, oxygen, etc. It should be noted that 65 children (77%) became afebrile within 24 to 48 h after initiating doxycycline.

Table 4. Complications and Their Percentage Distributiona

The recovery of the child, death, or sequelae was considered for assessing the outcome of the disease. About 79 (94%) of cases had a complete recovery, whereas 4 (4.7%) cases died of complications. One case had sequelae due to septic shock, ARDS, and meningoencephalitis. Each complication was managed as per the standard unit protocol. Patients presenting with shock, severe ARDS, MODS, AKI, and DIC on admission had an unfavorable outcome, which was statistically significant (Table 5).

In this study, we noticed that the prevalence of scrub typhus was more during the months of September to December, and the majority of cases were reported in the year 2012. Many pediatric and adult studies from various parts of India, like Manish et al. (3), also observed the maximum number of cases from September to February, which are considered as cooler months. However, Thomas et al. (19), in his study conducted in South America, noticed the appearance of all cases of scrub typhus between January and February, suggesting that the summer may be the main period of activity of the vector.

We observed equal distribution among male and female, whereas a prospective study from Pondicherry by Murali et al. (20) and Manish et al. (3), in their studies, noticed a slight male preponderance (M: F-1.4:1).

The incidence rate was higher among the age group of 12 to 18 years. It was also higher among adolescents, which may be due to their outdoor activities compared with the younger ones. On the contrary, Nowneet et al. (21), in their study, observed that two-thirds of all children were < 12 years of age with children between 12 and 18 years of age, accounting for the remaining one-third of cases.

We observed a high prevalence of cases in and around Chennai and Neyveli, which could potentially be due to case selection bias.

Eschar is a useful sign of variable occurrence and must be differentiated from anthrax and other Rickettsial infections. It is the result of a painless chigger bite and is often located in areas that are hard to examine, such as the genital region or under the axilla. It evolves as a small papule, enlarges, undergoes central necrosis, and acquires a blackened crust. In our study, we observed eschars in the scalp, postauricular groove, axilla, or perineum, which was in concordance with other pediatric studies.

Few notable laboratory findings were thrombocytopenia (27.3%) and LFT showing hypoalbuminemia with elevated SGOT and SGPT among 62% of the study population. In concordance to our study, Palanivel et al. (22) also observed elevated liver enzymes in 64% of cases, and Murali Krishnan et al. (20) 21 also observed thrombocytopenia in more than 50% of children. AKI was found in 9 cases (10.7%) in similarity to Palanivel et al. (22) who reported AKI at a rate of 10% in their study.

The response to treatment and time to defervescence was within 24-48 h in many cases, which was similar to other pediatric studies, like Palanivel et al. study (22)

A study by Palanivel et al. (22) also had similar findings stating that the causes of death were shock, ARDS, acute renal failure (ARF), MODS, and DIC. Late referral to hospital with organ dysfunction was among the reasons for an unfavourable outcome.

In this study, the multivariate analysis could not be analyzed due to low mortality, and the small sample size was another limitation.

Scrub typhus is a common re-emerging disease in children. The months from September to December witnessed the maximum number of cases. High-grade, intermittent fever lasting for more than 5 days was the most common presenting complaint in all the cases. Mortality and morbidity were higher among patients presenting with shock, ARDS, AKI, DIC, and MODS on admission. Therefore, hypotension, hypoxia, oliguria associated with azotemia, and bleeding tendencies on admission are associated with a guarded prognosis. Thus, pediatricians should keep a high index of suspicion for scrub typhus in any febrile child having a rash, hepatosplenomegaly, thrombocytopenia, and features suggestive of capillary leak.

Copyright © 2020, Author(s). This is an open-access article distributed under the terms of the Creative Commons Attribution-NonCommercial 4.0 International License (http://creativecommons.org/licenses/by-nc/4.0/) which permits copy and redistribute the material just in noncommercial usages, provided the original work is properly cited.
2020-11-05 18:08:01
Dear editor, sorry for delayed response as i had missed the mail sent to me on 27th sep, i have submitted the approved PDF, kindly consider the final approval and dot he needful thanking you Regards Dr Shruthi