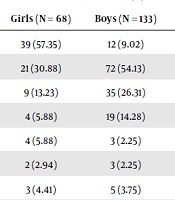 Gastrointestinal Manifestations in Children with Kawasaki Disease in Isfahan, Iran

Kawasaki Disease (KD) is an acute systemic vasculitis that generally affects children. Patients with KD do not show all typical clinical symptoms of the disease.

Considering various studies in diagnosing the gastrointestinal symptoms of KD and the lack of similar studies in Iran, we aimed to investigate the frequency of gastrointestinal problems in patients with KD who referred to Imam Hossein hospital of Isfahan from 2012 to 2017.

In a retrospective cross-sectional study, we examined the medical records of all 1 - 14-year-old patients with KD who were hospitalized from 2012 to 2017. The inclusion criteria included patients with a definite diagnosis of complete or incomplete KD, a hospitalization record in Imam Hossein children hospital, and no other systemic disorders. In the case of incomplete information, the patient’s record was excluded from the study.

A considerable percentage of KD patients presented with the complaint of gastrointestinal symptoms such as abdominal pain (17.4%), diarrhea (16.9%), and vomiting (28.9%). None of the patients had fecal occult blood or abnormal stool examination and evidence of pancreatitis.

Kawasaki Disease (KD) is an acute systemic vasculitis that generally affects children between the ages of two months and five years, although the disease has also been described in adults (1-3). The male to female ratio is approximately 1.8:1. The etiology of KD is unknown (1, 4), and it is considered a self-limiting disease. If it is not treated, coronary artery aneurysm may occur in 15% - 25% of the cases. In some cases, KD patients do not show all typical clinical symptoms of the disease. Besides, KD shows other atypical symptoms that may delay the diagnosis of KD and increase coronary artery events (5, 6).

Gastrointestinal or hepatic involvement is not usual in patients with KD but is seen in some cases (7). These atypical involvements may delay the diagnosis and treatment of KD and increase the complications of the disease (7). Gastrointestinal manifestations of KD have been shown in several studies. Fabi et al. showed that 106 out of 302 KD patients presented with abdominal symptoms, and they were younger than other patients. They also showed that in the acute phase, patients with abdominal symptoms had higher platelet (PLT) counts and lower albumin levels, while in the subacute phase, they had higher white blood cell and PLT counts and lower red blood cell counts (8). Zulian et al. showed that 4.6% of KD patients presented with the symptoms of the acute surgical abdomen (9). There are also a few case reports and reviews that discuss the atypical presentations of KD. Hou et al. reported three cases of KD that presented with the symptoms of acute abdomen. They all had gallbladder hydrops. Although two of the three patients underwent laparotomy and cholecystectomy, the authors recommended supportive medical treatment for abdominal symptoms, reserving surgical intervention only for those who relapse or develop the complications of gallbladder hydrops (10).

A retrospective cross-sectional study was carried out in Imam Hossein hospital affiliated to the Isfahan University of Medical Sciences. The patients’ data were retrospectively extracted from their medical records. The inclusion criteria were a definite diagnosis of complete or incomplete KD, a hospitalization record in Imam Hossein hospital, and having no other systemic disorders. In the case of incomplete information, the patient was excluded from the study. All patients who were afflicted with KD from 2012 to 2017 were selected, and their medical records were investigated in a census form.

The demographic data such as name, age, and sex were extracted from medical records. We also recorded the past medical history, such as initial symptoms leading to the diagnosis of KD, and gastrointestinal symptoms, such as abdominal pain, diarrhea, nausea, vomiting, and jaundice. The laboratory findings, including blood cell counts, liver function tests (Aspartate Aminotransferase (AST), Alanine Aminotransferase (ALT), bilirubin (total and direct), and Alkaline Phosphatase (AlkP)), and stool smear were also recorded for each patient. The abdominopelvic ultrasonographic findings, including hepatomegaly, splenomegaly, gallbladder hydrops, increased gallbladder wall thickness, and evidence of cholecystitis or pancreatitis were recorded, as well. All data were kept confidential. The study was approved by the Ethics Committee of the Isfahan University of Medical Sciences. Written informed consent was obtained from all participants. All data related to the patients were entered into SPSS version 20 software (IBM Crop., Armonk, NY, USA) by two trained persons (to reduce the data entry error) and then analyzed. The mean and standard deviation were utilized to report the quantitative data and the absolute frequency and percentage to report the qualitative data.

Table 1. Serum Levels of Hepatic Aminotransferase and Bilirubin According to Sex in KD Patientsa, b

aThe upper limit of ALT was considered 28 for boys and 33 for girls.

bThe upper limit of AST was considered 59 for boys and 30 for girls.

Among the patients, some children initially referred due to gastrointestinal problems and showed KD following numerous examinations and diagnostic tests. For instance, a three-year-old child referred to the hospital with no history of previous disease or fever and only with abdominal pain. The patient underwent diagnostic procedures, including gastric endoscopy and recto-sigmoidoscopy, both of which were normal. Finally, his KD was diagnosed following more examinations and rheumatologic consultation.

Based on the literature, KD likely starts with no diagnostic criteria of disease but gastrointestinal symptoms. The range of such involvements is possibly from abdominal pain, diarrhea, nausea, and vomiting to the wide involvement of gastrointestinal organs such as the liver and pancreas. In these cases, the dominant problems and digestive manifestations, as well as the delay in typical symptoms of the disease, would lead to a delay in the diagnosis of KD. The studies conducted on the atypical presentations of KD have revealed that the initial disease manifestations may be the same as gastrointestinal problems such as abdominal pain, distention, vomiting, jaundice, and hepatomegaly. Gallbladder hydrops is also among the known complications of this disease. Cholestasis, intestinal pseudo-obstruction, ileus, ischemic colitis, hepatic necrosis, and the increased average of hepatic enzymes are likely to occur in KD patients (9, 11).

The present study showed that a considerable percentage of KD patients had gastrointestinal problems such as abdominal pain (17.4%), diarrhea (16.9%), and vomiting (28.9%). This finding is similar to the study of 219 KD patients that showed acute abdominal pain in 4.6% of patients (9). This difference in the prevalence of the symptoms is likely related to genetic or environmental differences. In a review study of gastrointestinal involvements among KD patients, Colomba et al. showed that the most prevalent gastrointestinal manifestations were abdominal pain and vomiting, while the most frequent finding in radiological examinations was pseudo-obstruction (12). In other studies conducted in 2009 - 11 on the atypical symptoms of KD, the prevalent gastrointestinal symptoms were vomiting, diarrhea, and abdominal pain (13, 14), which are very similar to our findings. In other studies, digestive problems such as abdominal pain, diarrhea, and nausea were observed in 30% of patients. Cholestasis and gallbladder hydrops have also been seen in 5% of cases. In our study, the sonographic evidence of gallbladder hydrops and cholestatic jaundice was seen in 1.5% and 1.3% of patients, respectively (15, 16). In another study by Falcini et al. from Italy, the prevalence of hepatomegaly and increased hepatic enzymes was 14.55% and 20% - 30% in KD patients, respectively (17) while in our study, 0.5% of patients had the sonographic evidence of hepatomegaly and high AST and high ALT were observed in 24% and 46% of patients, respectively.

In a case report at the Cambridge University, a patient referred with abdominal pain and distension. The radiological findings showed progressive intestinal wall edema, gallbladder hydrops, and hepatosplenomegaly. All symptoms improved after the diagnosis of KD and the onset of IVIG treatment (18). Prokic et al. reported a six-year-old child with fever for five days, rash, abdominal pain, vomiting, and nausea, treated with antibiotics. During the hospital course, he suffered from abdominal tenderness and showed dilated bowel loops in abdominal radiographic evaluations. Abdominal ultrasonography revealed gallbladder hydrops and edematous pancreases. On the seventh day, echocardiography showed an abnormality in coronary arteries. The patient was treated with IVIG, and the fever stopped after 48 hours. Echocardiographic abnormalities improved in the follow-ups (19). In our study, we had no pancreatitis cases in ultrasonography, but gallbladder hydrops was seen in several patients (1.5%).

In general, the highest frequency of gastrointestinal symptoms among KD patients was related to abdominal pain and vomiting. Furthermore, the increased hepatic enzyme was the most prevalent paraclinical finding. If the diagnosis was made early, unnecessary examinations and diagnostic procedures would be omitted, and the economic burden would be reduced on society and family.

Concerning this study and similar research, it seems that a considerable percentage of KD patients are afflicted with gastrointestinal manifestations. If the gastrointestinal manifestations appear before the diagnostic criteria of KD, its diagnosis and treatment may be delayed, which increases the risk of coronary complications. Additionally, unnecessary invasive procedures may be carried out for the patient. Hence, pediatricians and pediatric surgeons should consider KD for children afflicted with fever, gastrointestinal problems, and pseudo-obstructive radiological findings to reduce the economic burden of the disease on society and patients by decreasing the expensive workup. Furthermore, it is proposed to conduct more studies on the atypical symptoms of KD. Besides, gastrointestinal and hepatic symptoms should be considered in KD diagnostic scoring systems to avoid the delayed diagnosis of disease.