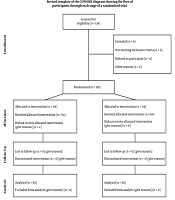 Efficacy of Zinc as Adjuvant Therapy in the Treatment of Severe Pneumonia in Hospitalized Children: A Randomized Clinical Trial

Pneumonia remains one of the leading causes of childhood mortality and morbidity in developing countries. Studies showed that zinc supplementation can prevent pneumonia, but its therapeutic effectiveness has not been determined definitively.

This study evaluated the effect of zinc supplementation as adjuvant treatment on children with severe pneumonia admitted to 17th Shahrivar Training Hospital in Rasht, Iran.

In this double-blind placebo-controlled clinical trial, 120 children aged two to 60 months hospitalized for pneumonia were randomly divided into 2 groups of size 60 each. The first group received zinc sulfate (20 mg daily for children twelve months of age or older and 10 mg daily for children younger than 12 months), and the second group received a placebo for seven days. All patients received standard antibiotic treatment for pneumonia. The children were daily evaluated, and recovery time for fever and tachypnea (as primary outcomes) and duration of hospitalization and mortality rate (as secondary outcomes) were compared between the two groups.

The mean age of patients was 14.1 months ± 13.9. The youngest and oldest patients were aged 2 and 60 months, respectively. No significant difference in age and sex distribution was found between the two groups. The zinc receiving group experienced a considerably shorter time of fever (2.1 days vs. 2.84 days, P < 0.05) and tachypnea (1.75 days versus 2.1 days, P = 0.011). There was no significant difference in the duration of admission between the two groups (P = 0.728), and no cases of death occurred in either group.

This study showed that adjuvant treatment with zinc in children aged 2 to 60 months with severe pneumonia accelerates recovery from pneumonia. Further studies are needed to investigate the effects of administering zinc as adjunctive therapy for pneumonia in other age groups.

Malnutrition, which continues to be a common problem in developing countries, exacerbates the symptoms of pneumonia, prolongs the disease duration, and increases mortality (4). In a previous study, we found a significant association between children’s vitamin D serum levels and developing pneumonia (5). Through strengthening the immune system to defend against infections, zinc has an important role in preventing pneumonia (6). However, zinc deficiency is common, especially in communities with low socioeconomic levels (4).

There are studies that reported low serum zinc levels in children with pneumonia (7, 8). Besides, several systematic review studies have reported the effectiveness of zinc in preventing pneumonia (9). Nevertheless, the role of zinc in the treatment of pneumonia is still uncertain. While some studies have shown the positive effect of zinc supplementation as adjuvant treatment (10, 11), there are studies that didn’t confirm such effect (12, 13).

Similar to other developing countries, zinc deficiency is also common in Iran (14-16). Also, adjuvant treatment with zinc in addition to standard antibiotic treatment of pneumonia has been an available and safe treatment without any significant reported complication (10, 11).

Therefore, the current double-blind placebo-controlled clinical trial aimed to determine the effect of zinc as an adjunct therapy in children with severe pneumonia hospitalized in 17th Shahrivar Training Hospital in Rasht, Iran. The 17th Shahrivar Hospital has 120 active beds for clinic and emergency departments, neonates, neonatal and pediatric intensive care units (PICU and NICU), neurology, immunology, endocrinology, nephrology, gastrointestinal, cardiology, rheumatology, hematology, and infectious departments. If the effectiveness of this treatment is confirmed, children with pneumonia can receive zinc in addition to standard antibiotic therapy in the future, and this method may decrease the morbidity and mortality caused by the disease and reduce hospitalization.

This double-blind controlled clinical trial was performed from September 2017 to May 2018 on children 2 months to 5 years old with severe pneumonia hospitalized in 17th Shahrivar Pediatric Educational Hospital, Rasht-Iran. The pneumonia was defined as fever, cough, crackles, and suggestive chest X-ray (2). Also, the disease was considered severe if it was accompanied by symptoms of respiratory distress such as tachypnea or chest retraction. Inclusion criteria were as follow being aged 2 months to 5 years and hospitalization due to severe pneumonia. The exclusion criteria included a history of chronic cardiorespiratory diseases including asthma and other chronic diseases, immunodeficiency, gastroesophageal reflux, significant clinical malnutrition, or failure to thrive, and being treated with the supplements containing zinc during the last three months. In addition, patients were excluded if they couldn’t tolerate zinc or placebo.

In our study, the primary outcomes were the time to return of body temperature, and respiratory rate to normal, and the secondary outcomes were duration of hospitalization and mortality rate. Normal respiratory rate was defined as less than 50 breaths per minute for children 12 months and younger, and less than 40 breaths per minute for children aged more than 12 months. Fever was defined as an axillary temperature greater than 37.4°C (10).

To estimate the sample size, we followed the methodology used by Valavi et al. (10), with the test power of 90%, the confidence level of 95%, the standard deviation of 6.6 and 7.15 in the zinc and placebo groups, respectively, and expected clinical difference of 5 hours. That resulted in a sample size of 40 for each group. But, since in the current study comparisons were supposed to be separated by age and gender, the total sample size was increased by 40, 20 for each group.

The eligibility of 134 patients was assessed, who 128 of them were included. The rest were excluded due to reasons such as having underlying diseases. Written informed consent was taken from parents of all participants. Then, information such as demographic data, respiratory rate, and body temperature at the time of admission were recorded. Eligible patients were randomly assigned into two groups by Math lab software: 64 cases in group A or zinc recipients and 64 cases in group B or placebo recipients. The children were daily evaluated, and the time required for the respiratory rate and body temperature to return to normal, duration of hospitalization, and mortality rate of the two groups were compared. During the study, four children from each group were excluded due to oral intolerance to zinc or placebo (Figure 1). 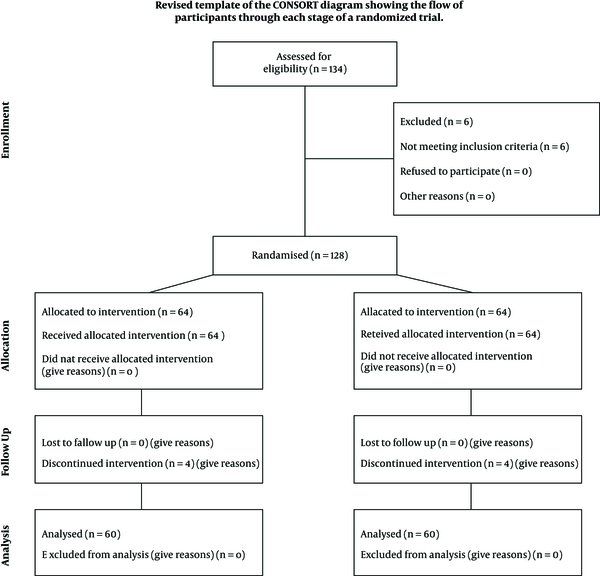 In group A, 20 milligrams per day (mg/d) of zinc sulfate syrup (Alborz Daru Co., batch number: 0111-13096, 13.2.2016) was given by a trained nurse as oral or via gavage to children aged 12 months and more and 10 mg/d to children younger than 12 months for 7 days. Children in group B received the placebo for 7 days. The placebo was prepared with the same shape and color by the manufacturer of zinc syrup. All patients received standard treatment, including antibiotic therapy.

A pediatric assistant who was blinded to adjuvant treatment (zinc or placebo) evaluated the participants’ responses to the treatment. Children’s body temperature was measured by a digital thermometer (Express thermometer (beurer) model FT15/1 manufactured by Beurer GmbH, Germany), with a maximum error of 0.1°C. The pediatric assistant assessed patients daily for body temperature, respiratory rate, and possible drug side effects.

Since several studies mentioned to the effectiveness of administering zinc as an adjunct therapy in the treatment of pneumonia (9, 10) and no significant side effect is reported by these studies, there is no contraindication to the use of this treatment in patients with pneumonia. Written informed consent was obtained from parents of all patients. The study is approved by the Ethics Committee of the Guilan University of Medical Sciences (approval code: 9210029702). This study is also registered in the Clinical Trial Registration Database of IRAN (code: IRCT201305072438N2).

Finally, the two groups were compared in terms of the abovementioned variables by SPSS V.21. The Kolmogorov-Smirnov test was used to assess the normality of quantitative variables. And since the data were not normally distributed (P < 0.05), the non-parametric Mann-Whitney U-test was used to compare the two groups. A P value of < 0.05 was considered statistically significant.

Table 1. Comparison of Study Variables Between Zinc and Placebo Groupsa

No statistically significant difference was found concerning the duration of admission between the two groups (P = 0.728, Table 1).

None of the patients needed mechanical ventilation and no death occurred during the study.

120 children aged 2 to 60 months hospitalized at 17th Shahrivar Hospital in Rasht (Iran) were investigated in this randomized clinical trial intended to evaluate the effect of zinc as adjunctive therapy in the treatment of pneumonia. The obtained results are consistent with the study of Valavi et al. (10), which is conducted in Ahwaz (Iran) on children with pneumonia. The time required to recover from respiratory distress and fever in the zinc group was significantly lower in both studies. The similarity of the results of these two studies may be due to the epidemiological similarities between the patients living in these two provinces of Iran in terms of nutritional conditions, the prevalence of zinc deficiency, and microorganisms causing pneumonia.

Basnet et al., in a study on children with pneumonia, showed that the time required for patients’ recovery and the rate of treatment failure in the zinc group was lower than the placebo group, which is similar to the current study (11).

Ganguly et al. (13), in a study on 98 children aged two to 10 years with pneumonia, found no difference in the time to recover from fever and respiratory distress between the two groups of zinc and placebo recipients. The mean age of patients in this study was about eight years and may have affected the results. For example, zinc deficiency may be more common in younger children.

It should be noted that many factors contribute to the duration of admission, including respiratory distress, oxygen requirements, general condition, oral tolerance, children and parents preparation for discharge, social condition, and so on (18). Therefore, the use of hospitalization time as the only tool to compare the usefulness or non-usefulness of zinc as adjuvant therapy in pneumonia may result in biased results, as in the present study, although the two groups were not different concerning the hospitalization time, but the recovery time of tachypnea and fever was significantly different.

As in the present study, there are several studies that reported no complication for zinc supplementation other than oral intolerance, and this complication can be controlled by dividing the daily dose into multiple doses (10, 11) or discontinuation of the drug (10).

The current study had limitations, including serum zinc level, was not measured before conducting the study to determine zinc deficiency, as similar to other studies that didn’t measure this value. Some studies reported that zinc deficiency may be prevalent in Iran (14-16). There were no cases of death or the need for assisted ventilation in our study. This can be attributed to the exclusion criteria applied in the current study (i.e., having a history of lung and heart problems including proven asthma, other chronic diseases, or immune deficiency, malnutrition, and failure to thrive).

This study showed that zinc adjuvant therapy could reduce the duration of fever and accelerate recovery from tachypnea in hospitalized patients with pneumonia aged from two to 60 months without any significant complication. Therefore, due to the availability of zinc preparations, favorable therapeutic effect on pneumonia, as well as its low complication, we suggest using zinc as adjuvant therapy for hospitalized pneumonia patients. Multi-center studies with larger sample sizes would be useful to confirm the results of the current study and applying them to other age groups. Also, the authors suggest performing more studies to evaluate the effect of zinc supplementation in the treatment of pneumonia in special patient groups such as patients with malnutrition, failure to thrive, or immune deficiency.

The authors would like to express their deepest appreciation to all those who provided them the possibility to complete this study, especially the staff at 17th Shahrivar Hospital. Also, special gratitude to the Vice-Chancellor for Research of the Guilan University of Medical Sciences, which funded this research project.