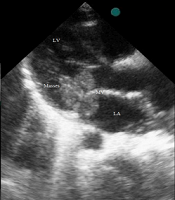 A 21-month-old boy was admitted to our center with a high-grade fever and gastrointestinal symptoms, but no significant respiratory complaints were noted. A history of lower limb pain and morning claudication was also present. The patient had leukocytosis with an elevated erythrocyte sedimentation rate (ESR) of two months' duration. Other acute phase reactants were detected despite previous antibiotic therapy; however, his blood culture result was negative. In echocardiography, multiple masses were seen in the left atrium near the mitral valve apparatus. The diagnosis of infective endocarditis was made, and intravenous antibiotics were prescribed for up to two weeks. He then underwent surgery because of poor response to medical treatment and renal complications. During surgery, a small mass was seen in the left atrium, and two other masses were within the mitral chordae. The histopathology report confirmed atrial myxoma. Shortly after surgical resection of the tumors, the patient's symptoms improved, and inflammatory indices returned to normal.

Constitutional manifestations of myxoma render it reasonable to consider it as a differential diagnosis of infective endocarditis. Obtaining a complete clinical history and using imaging tools are necessary for the correct diagnosis and prevention of complications of inappropriate treatment.

Myxomas are rare primary cardiac tumors, estimated at approximately 0.5 cases per million population. Myxomas are polypoid, round, or oval, and mostly (75 - 80%) occur in the left atrium (1, 2). The majority of the myxomas are benign (2). The etiology of atrial myxoma is mostly unknown (3). The triad of constitutional, obstructive, and embolic events is well recognized in the diagnosis of this tumor (4, 5). Obstructive symptoms occur in about 80% of pediatric patients. A peripheral embolism occurs in more than 70%, and up to 65% of children with myxoma show constitutional symptoms (6).

Therefore, one of the characteristics of myxomas, which makes them distinct from other cardiac tumors, is their presentation with systemic signs and symptoms (7). Infective endocarditis is one of the closest differential diagnoses of myxomas. It may manifest itself with similar systemic and local presentations confusing physicians at least in the early steps of diagnosis (1). There are several nonspecific symptoms in myxoma patients, such as fever, respiratory disorders, wheezing, arthralgia, myalgia, weight loss, fatigue, and muscle weakness, all of which are probably associated with interleukin-6 cytokine production (8, 9). However, nearly 20% of patients are asymptomatic (9). Nonspecific symptoms of myxoma can lead to delayed detection, misdiagnosis, and great challenges in the management and treatment, as seen in our case report (10).

A 21-month-old boy with normal growth and development presented to a local hospital in October 2019 due to a high fever (38.7°C) of two months' duration. There was a history of elevated erythrocyte sedimentation rate (ESR) and gastrointestinal symptoms, including nausea, vomiting, and diarrhea for two weeks, but no significant respiratory complaints were presented.

A history of lower limb pain and morning claudication was also detected. He had no remarkable past medical history. Laboratory and imaging studies with special consultations were performed. There was a II/VI systolic heart murmur at the apical border of the heart. The lung fields and other examinations were normal. He had no organomegaly. The ECG showed sinus tachycardia. No pulmonary lesion was found in the chest X-ray. We took three blood culture samples from the patient at the time of fever. Laboratory examinations revealed an increased ESR (113 mm/h), high C-reactive protein (CRP) level (21 mg/mL), platelet count of 453 × 109/L, and leukocytosis [white blood cell (WBC) count (24.3 × 109/L)] with neutrophilia. The urinalysis was normal. Other tests, including creatine kinase-MB, procalcitonin, and troponin I levels were within normal ranges. In transthoracic 2D echocardiography, three mobile masses were seen, considered to be vegetations in the left atrium and around the mitral valve apparatus (Figure 1). In addition, moderate mitral regurgitation was detected, but there were no other congenital heart defects. 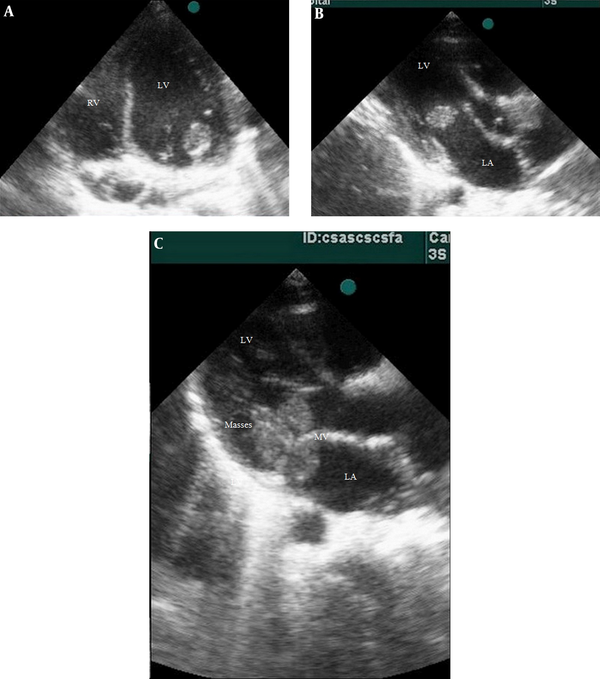 Rheumatology consultation recommended rheumatoid factors measurement. Antinuclear antibodies (ANA), rheumatoid factor (RF), and anti-cyclic citrullinated peptide (anti-CCP) were negative. Pelvicography was normal. After orthopedic counseling, an ultrasound examination of hip joints was done that showed no evidence of septic arthritis. Based on these findings and Duke Criteria (11), a diagnosis of infective endocarditis (IE) was made, and intravenous antibiotics were instituted for up to two weeks with an appropriate protocol. During therapy, the patient’s fever continued, but the first blood culture result was negative. The mass size did not decrease on serial echocardiography studies. The patient showed increased levels of blood urea nitrogen (BUN) and creatinine, and acute renal injury occurred due to antibiotic therapy complications. Cardiac magnetic resonance (CMR) imaging was requested, which reported multiple highly mobile round masses as vegetation (measuring 11 × 5 mm max.). There were high signals on T2-weighted sequences and iso-signal in T1-weighted sequences, and they were attached to the anterior mitral leaflet with extension to the sub-valve area with protrusion into the left ventricle during diastole. This finding was suspicious of endocarditis (Figure 2). Concerning persistent fever, the appearance of renal complications, and the insignificant decrease in inflammatory factors, the diagnosis of IE refractory to medical treatment was made and led us to surgical therapy. 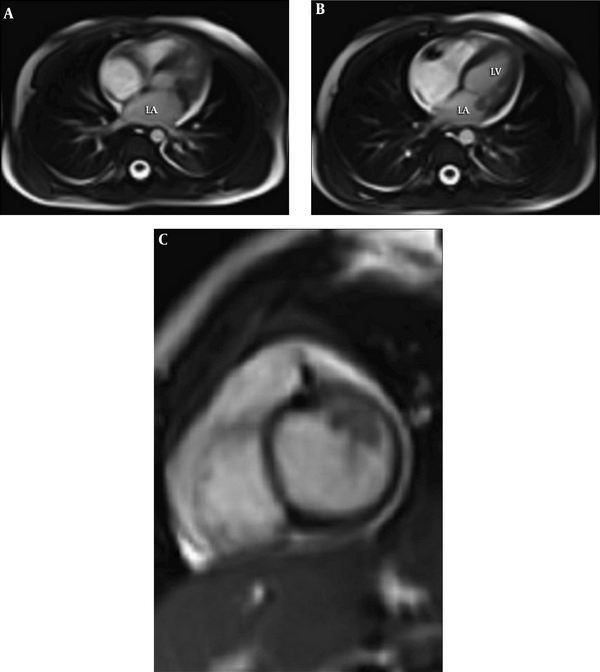 During surgery, a mass in the left atrium, measuring approximately 8 × 8 mm, was seen protruding from the mitral leaflets. By pushing the mitral leaflets aside, it was seen to be connected to the anterolateral papillary muscle and left ventricular wall below the annulus. The other two masses were seen in the same area and among the mitral chordae with dimensions of about 6 × 6 mm and 5 × 5 mm. They were resected with due care. After surgery, the diagnosis of myxoma was confirmed. The specimen was received in formalin that consisted of creamy fragments of soft to firm tissue totally measuring 6 × 5 × 5 mm. Microscopic sections (stained by H & E method) showed a benign hypocellular neoplastic tissue attached to a fibrotic valve. Neoplastic cells consisted of some smooth muscle cells, spindle cells, a few stellate cells, and foci of hemorrhage. There was no evidence of malignancy in this specimen. Based on the pathological observations, a diagnosis of “benign fibromyxoid tumor compatible with cardiac myxoma” (Figure 3) was established. Besides, PCR and tissue culture results were negative. Postoperative transthoracic echocardiography demonstrated mild mitral regurgitation with no obvious residual mass. A few days after the surgical resection, ESR decreased from 88 to 50, and the patient's fever and other symptoms were resolved. A follow-up study after three months showed that all the inflammatory markers were normal. 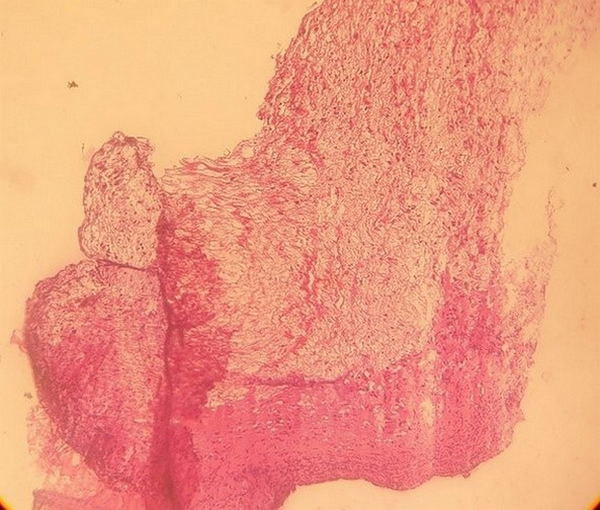 Clinical differentiation between myxoma and endocarditis is occasionally difficult. Medical history and physical examination alone may not provide the final diagnosis (7). Lack of specific clinical symptoms can lead to misdiagnosis, delayed diagnosis, and further complications (12). Also, laboratory and microbiological results cannot always help us reach a definitive diagnosis and sometimes may even be misleading (7, 13). Therefore, for a definitive diagnosis of myxoma, the pathologic examination of the resected tumor is necessary (14). This patient presented with systemic symptoms of myxoma, but other findings in myxoma that mimic endocarditis were not seen, including heart failure, respiratory disorders, cerebral aneurysm, and systemic emboli (15). At first, we attributed the limb pain to nonspecific symptoms of infectious endocarditis such as myalgia and arthralgia, but retrospectively, limb pain in cardiac myxoma may be due to microembolization to lower extremities and ischemia or nonspecific symptoms of myxoma (8, 9). In our patient, there were no significant symptoms and signs or family history compatible with the Carney complex. The patient had no diagnostic criteria such as dermatologic manifestations (lentigines, cutaneous myxoma, and pigmented skin freckling) and multiple endocrine and non-endocrine neoplasia, except for cardiac myxoma, so it was removed from the final diagnosis list (16).

Echocardiography and imaging methods are two useful diagnostic tools for the differentiation of myxoma from infective endocarditis (14, 17). Typical features of endocarditis in echocardiography are vegetation (< 3 cm) and masses of smaller size that are attached to the valves rather than to the myocardium (14). In practice, infective endocarditis is more common than myxoma. In addition, because some other misleading factors such as chronic fever, vegetation-like masses, and elevated laboratory inflammatory factors existed, we misdiagnosed myxoma as infective endocarditis. The patient's cardiac structure was normal, and he did not have congenital heart disease. This finding is also in contrast to endocarditis, in which one usually discovers cardiac structural defects (18). Infected myxoma is extremely rare and manifests with aggravated clinical symptoms, including high-grade fever, multiple embolic events, and the presence of refractory microorganisms. It is documented when the microorganism is seen by the pathologist or when the PCR test is positive (19, 20). We ruled out infected myxoma with negative PCR and tissue culture results; however, systemic infections or infections of other organs in at least some periods might still be probable. This possibility, of course, could not be documented. The recurrence of the tumor is very rare; nevertheless, the follow-up of such patients is recommended (21, 22).

This report suggests that the diagnosis of cardiac myxoma requires a precise and detailed clinical history, laboratory examinations, and imaging tools. Taking into account all the differential diagnoses of infective endocarditis, including myxoma can help prevent the misdiagnosis of other diseases with similar symptoms and signs.