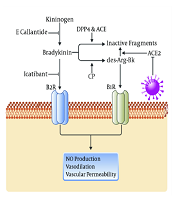 We would like to provide some novel therapeutic approaches to the COVID-19 pandemic crisis. With the global spread of COVID-19, finding novel applications for available medications could be beneficial in the current critical phenomenon. Although there is not a standard and reliable treatment for the recent COVID-19 pandemic, we decided to search for it due to its importance.

As a novel infectious disease, severe acute respiratory syndrome coronavirus-2 (SARS-CoV-2 or COVID-19) appeared in Wuhan, China, in December 2019 and broadly spread to other parts of the world (1). According to the latest global statistics, six million people in the world have been infected with this virus, with 400,000 deaths worldwide. The main symptoms of COVID-19 consist of fever, dry cough, shortness of breath, pulmonary edema, and myalgia or fatigue (2). As known, SARS-CoV-2 enters cells via angiotensin-converting enzyme 2 (ACE2) receptors. This route plays a key role in the pathogenesis of COVID-19 and the development of Acute respiratory distress syndrome (ARDS) (3, 4). It has been shown that anti-ACE2 antibodies and ACE2 inhibitors can block the SARS-CoV invasion (5, 6).

Bradykinin (BK), a linear nonapeptide, is extensively distributed in plasma and different tissues and formed by the enzymatic activity of kallikrein on kininogens. Kallikreins are divided into plasma kallikrein and tissue kallikrein (7). Various peptidases such as ACE (also known as kininase II) and carboxypeptidases (N and M) can degrade BK into inactive fragments. Bradykinin regulates plasma exudation, chronic inflammatory reactions, and nociception, and can trigger the dilatation of blood vessels through the release of prostacyclin, nitric oxide, and endothelium-derived hyperpolarizing factor; besides, it increases vascular permeability, ultimately leading to edema formation (8, 9). Kinins transduce their biologic effects through the stimulation of G protein-coupled receptors, which are divided into two groups including BK B1 and B2 receptors. The agonists for the BK B2 receptor are BK and Lys-bradykinin, while des-Arg-bradykinin and des-Arg-Lys-bradykinin bind to the BK B1 receptor (10).

It has been demonstrated that the SARS-CoV infection depletes ACE2 that leads to increased levels of [des-Arg (9)]-bradykinin (DABK), a bioactive metabolite of BK and a potent ligand of the BK B1 receptor in the lung that is related to lung injury and inflammation (11, 12). High levels of inflammatory cytokines upregulate the B1 receptor on endothelial cells and through the activation of the BK system, may increase the risk of capillary permeability and angioedema (13). Bradykinin-mediated angioedema consists of three angioedema types:

The C1-inhibitor (C1-INH), a key protease inhibitor in the complement system, is involved in the regulation of numerous serine proteases, such as contact system protease (plasma kallikrein), early proteases of the classical and lectin complement systems (C1r/s, MASP1 and 2), coagulation factor XIa, plasminogen, and vascular permeability. As known, C1-INH dysfunction can cause inappropriate activation of the contact system with the excessive generation of kallikrein, resulting in the proteolysis of high molecular-weight kininogen and eventually the production of BK (14). Besides, HAE, an autosomal dominant disease, is caused by either a mutation in the gene encoding C1-INH or decreased C1-INH protein levels (15). In patients with acquired C1-INH deficiency, the catabolism of C1-INH increases (16). Bradykinin is inactivated by ACE, but ACE inhibitors can block the inactivation of BK by ACE, leading to an increase in its biological activity and enabling to induce angioedema (17) (Figure 1). 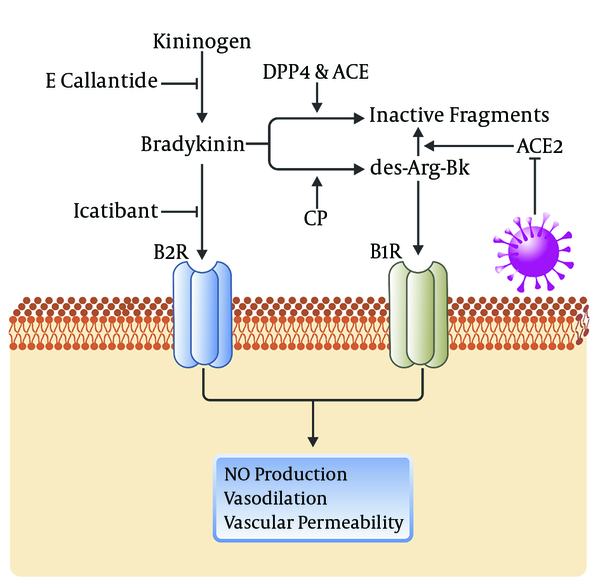 -Icatibant: Icatibant acetate (Firazyr) is a selective and competitive, synthetic inhibitor of the B2 BK receptor. Previous randomized controlled clinical trials (phase 3) evaluated the efficacy of this drug on HAE. Icatibant administration may relieve the symptoms of angioedema and improve the overall situation in all patients after 0.5 - 11 hours. In 40% of patients, therapeutic goals were achieved in less than four hours (18, 19). Icatibant prepared as prefilled 30 mg syringes can be administrated by subcutaneous injection; the mean time to maximum plasma concentration (Tmaxc) was 1.79 h and the mean maximum plasma concentration was 405 ng/ml. (20) Common adverse effects are elevated liver enzymes, injection reaction, dizziness, headache, nausea, and fever (21).

-Fresh Frozen Plasma (FFP): The FFP contains varying amounts of C1-INH. It has been recommended for HAE and ACE inhibitor-mediated angioedema (22). The efficacy of FFP has been reported in reducing ICU stay duration and intubation frequency (23, 24). There is a theoretical controversy about the clinical application of FFP in COVID-19 patients because it contains substrates such as kallikrein and kininogen that may elevate bradykinin levels and worsen the condition of patients. Despite this hypothetical impact, FFP has not worsened symptoms in similar angioedema patients. Recent reports suggest the effectiveness of cured COVID-19 patients' plasma in the treatment of severely ill patients. Thus, FFP can be suggested as a possible treatment for further clinical studies. It should be considered that FFP could exert some side effects such as hypersensitivity reactions or may worsen angioedema and transfusion infection (25).

-Ecallantide: Ecallantide (Kalbitor) is a recombinant inhibitor of kallikrein that is made available as 3 ml vials and approved for use in HAE (26). This protein prevents bradykinin production from kininogen. A recent placebo-controlled clinical trial named EDEMA demonstrated that the administration of 40 mg/m2 ecallantide could improve the symptoms of angioedema in four hours although other doses did not (27). They suggested subcutaneous injection as an effective route in comparison with IV application. Common adverse effects of ecallantide are headache, injection site reactions, nausea, and fever while hypersensitivity and anaphylaxis could be considered life-threatening phenomena (28).

-Berinert and Cinryze: These medications provide the endogenous plasma protein that controls the function of kallikrein and factor XII, reducing the level of bradykinin. Berinert and Cinryze are concentrated C1-INH collected from healthy blood donors. The mechanism of action of these molecules is the regulation of kallikrein and factor XII activity and the reduction of bradykinin production (29). One previous study showed that the mean time of angioedema reversal in 18 HAE patients was 42.2 minutes (22). The main side effect of these medications could be hypersensitivity, thrombosis, and blood-borne infection.

As mentioned above, ARDS is well known as the main death cause of COVID-19-infected patients. Central pathophysiologic features of ARDS include dysregulated inflammation, inappropriate recruitment, the activity of leukocytes and platelets, uncontrolled activation of coagulation pathways, and altered permeability of alveolar endothelial and epithelial barriers. Kawasaki et al. reported that DPP4 inhibition by sitagliptin attenuated LPS-induced lung injury in mice, as confirmed by inhibiting pro-inflammatory cytokines IL-1β, TNF-α, and IL-6 (30).

In summary, due to the increased spreading of the disease and its high mortality, there is an urgent need to find effective treatments. The role of the kallikrein-kinin system in the pathogenesis of COVID-19 has been less examined. We suggest that the severity of the disease and its high mortality are because of vascular problems owing to the activation of B1 and B2 receptors on endothelial cells in the lungs and dysregulated BK; thus, blocking these receptors or decreasing the production of BK might be effective in COVID-19 treatment. We propose that targeting BK may open a new potential therapeutic window for the treatment of COVID-19.