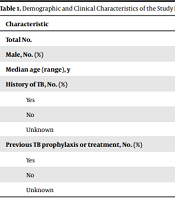 The current study aimed at evaluating the potential role of IL-2 to detect both active TB and LTBI among household contacts of patients with pulmonary TB in two TB-endemic regions of Iran.

A total of 650 household contacts of patients with TB were invited to participate in the current study. All subjects were diagnosed on extensive clinical evaluation of active TB and LTBI based on clinical manifestations and laboratory findings. The IGRA test was performed using QuantiFERON®-TB Gold Plus. The serum level of IL-2 was measured using the ELISA Development Kit.

A total of 237 household contacts entered the final analysis, including 132 patients with LTBI and three with active TB. In addition, 14 subjects were included as TB controls and 102 as TB-uninfected controls. The serum level of IL-2 was significantly higher in active TB and LTBI patients than TB-uninfected controls. The ROC curve was plotted between active TB and LTBI, revealing that the cutoff point of 25.5 pg/mL identiﬁes the active form with 88.24% sensitivity and 36.36% speciﬁcity.

The current study indicated that the IL-2 assay could not discriminate between active TB and LTBI with acceptable sensitivity.

Tuberculosis (TB), caused by Mycobacterium tuberculosis, is a chronic granulomatous infection that predominantly infects the lung but can involve any organ. TB remains one of the top 10 reasons for death and the leading cause of death from an infectious disease worldwide, causing more than 1.5 million deaths annually (1, 2). Early detection and diagnosis of TB are the major priority of the global TB control and elimination efforts. Under-reporting and under-diagnosis of TB cases in high TB burden countries, estimated to be around one-third of the cases, are considered the most unusual challenge in controlling the TB epidemic (3, 4). Importantly, there is an urgent need for early detection and diagnosis of both patients with active TB and latent tuberculous infection (LTBI), according to the World Health Organization recommendations (5, 6).

The interferon-gamma release assays (IGRAs) are the most advanced tests in TB immunodiagnosis. These assays determine the level of IFN-γ expression in response to protein fractions and specific antigens of M. tuberculosis (7). The QuantiFERON®-TB Gold Plus (QFT-Plus) test is a novel version of IGRAs, having a high clinical value to detect LTBI with higher sensitivity and specificity than the traditional IGRAs. In addition, the QFT-Plus test can distinguish between TB disease and non-tuberculous mycobacteria (NTM) infections, as well as BCG immunization, by measuring IFN- γ levels against specific antigens of M. tuberculosis (8, 9).

However, the QFT-Plus test is not capable of distinguishing between active TB and LTBI. Thus, the identification and development of new approaches and biomarkers to reliably discriminate active disease from LTBI would be an essential evolution (10). Various cytokines and chemokines released by M. tuberculosis-specific antigen stimulation are explored in addition to IFN-γ as an adjunct diagnostic biomarker of TB. Interleukin-2 (IL-2) induces the proliferation and function of T-cell and has a significant role in cell-mediated immune responses and granuloma formation in TB disease. Previous studies reported that a high level of IL-2 is expressed in response to M. tuberculosis-specific antigens, signifying that this cytokine might be a potential TB biomarker (11, 12). Some researchers described that IL-2 production stimulated by specific antigens of M. tuberculosis increases significantly in patients with active TB compared to those with LTBI, suggesting that IL-2 may be a potential biomarker to discriminate active TB from LTBI (13, 14).

The present study aimed at evaluating the diagnostic potential of IL-2 to identify active TB and LTBI in household contacts of patients with pulmonary TB in two TB-pandemic provinces of Iran. Additionally, the IL-2 assay findings were compared with those obtained from QFT-Plus to assume whether the diagnostic performance of IGRA could be improved by combining it with the IL-2 assay.

The current study was conducted in various districts of two high TB burden provinces in Iran, including Golestan and Sistan-Baluchestan. The current study protocol was approved by the Ethics Committee of Shahid Beheshti University of Medical Sciences (ethical code: IR.NIMAD.REC.1395.039). Informed written consent was taken from all the patients prior to enrollment in the study. From August 2017 to August 2019, a total of 650 household contacts of patients with pulmonary TB were invited to participate in the study if they met the definition of a household contact. The inclusion criteria were: children aged < 18 years, with known contact with an index TB case within the previous six months, and households with close contacts with an index TB case. HIV-positive patients were excluded from the study. Before blood sampling, all participants signed their informed consent form. All subjects were diagnosed on clinical, radiological, and laboratory findings, including TB contact history, chest X-ray radiography, clinical sign\symptoms, microscopic examination of sputum smear, and bacterial culture test for M. tuberculosis. LTBI status was deﬁned as a positive IGRA reaction without clinical/radiological evidence of active TB disease.

plasma levels of IL-2was measured in the plasma acquired from the QFT tubes including Nil, TB1, and TB2 using ELISA Development Kits (Invitrogen Inc, MN, USA), according to the manufacturer’s instructions, and the results were expressed as pg/mL.

The correlation degree between IL-2 and IFN-γ was evaluated using the Spearman rank test. Test concordance between the biomarkers was calculated by kappa (k) statistic. Normal distribution of qualitative values was evaluated by the Kolmogorov–Smirnov test, and comparison of IFN-γ and IL-2 secretion between the groups was performed using the Mann-Whitney U test. In addition, multivariate analysis was carried out to detect factors associated with the positive results of each test. Diagnostic accuracies of IL-2 assay and IL-2/ IFN-γ ratio were assessed by plotting the operating characteristic (ROC) curve. All statistical analyses were conducted using SPSS version 22 (IBM Corp, New York, USA). In each test, a P-value of 0.05 was considered significant.

A total of 237 household contacts were recruited in the final analysis, including 132 patients with LTBI, three with active TB, and 102 TB uninfected controls. The demographic and clinical features of participants are summarized in Table 1. The analysis revealed no significant differences among the groups regarding age and gender.

Table 1. Demographic and Clinical Characteristics of the Study Participants

aData are expressed as median concentration in pg/mL (interquartile range).

Table 3. ROC Analysis for Cytokines in Discriminating Patients with Active LTBI from Uninfected Ones

a Data are expressed as median concentration in pg/mL (interquartile range).

Cytokines play a pivotal role in the pathogenesis of TB. It is widely accepted that IFN-γ and IL-2 produced by immune cells play a pivotal role in defense against M. tuberculosis infection (15, 16). In the last few decades, IGRAs are widely used for the indirect or immunologic diagnosis of TB infections, particularly among those at a higher risk for LTBI. However, IGRAs do not discriminate between LTBI and active disease, as the tuberculin skin test (TST) (17, 18). Although it is considered that IGRAs cannot distinguish active TB from LTBI, some authors found that the IL-2 assay, in combination with QFT-Plus, is a good candidate when is analyzed in combination. Several recent investigations indicated that IL-2-dominant functional T-cell signatures were associated with antigen clearance (19).

The current study findings revealed that the production of IL-2 was significantly higher among cases with active TB and LTBI compared to uninfected subjects. In accordance with the current study results, several authors reported that the performance of the IL-2 assay would be considered as an alternative or adjunct diagnostic approach to M. tuberculosis infections; however, it was emphasized that IL-2 is not valuable as a stand-alone diagnostic indicator of active TB or LTBI (20, 21).

The ROC analysis showed that the IL-2 assay had an acceptable speciﬁcity (88.24%) in distinguishing active TB from LTBI and low sensitivity (36.36%) in diagnosis. The low sensitivity could be due to the small sample size of the active TB group compared with LTBI cases and uninfected controls.

Recent studies demonstrated the potential role of IL-2 in distinguishing active TB from LTBI, suggesting a new potential biomarker (22-24). This could be due to the fact that IL-2 is differentially expressed in patients with active TB and LTBI (25). Bella et al., reported that CFP-10 and ESAT-6 were invaluable in distinguishing LTBI from active TB when IL-2 was measured, as for IGRAs, such as QFT and T-Spot TB test (14). They described that the IL-2 assay induced by Ala-DH indicated relatively high sensitivity and specificity for the diagnosis of active TB.

According to the current study analysis, in combination with the QFT-Plus test, the diagnostic sensitivity of IL-2 in distinguishing active TB from LTBI was lower than that of IL-2 alone, while the specificity of the test relatively improved. It is noteworthy that the performance of both IGRAs and IL-2 could increase the sensitivity of the test (26). It was previously described that the IL-2/IFN-γ ratio after 72 hours of stimulation with M. tuberculosis-specific antigens was significantly higher among patients with LTBI compared with those with active disease, with a predominant IFN-γ response (13). However, the current study results did not support the previous findings.

It is described that M. tuberculosis-specific antigens stimulate the IL-2 production at lower levels in LTBI cases after 24 hours; however, the amount of secreted IL-2 would be significantly higher after 72 hours in such patients compared patients with active TB and healthy controls (27). Therefore, the incubation time for IL-2 is important in obtaining valid results.

According to a study conducted by Desalegn et al., IFN-γ release increased against M. tuberculosis-specific antigens, but no IL-2 response was observed in HIV-LTBI co-infected individuals with long-term HAART (28). Hence, IL-2 could not be an appropriate diagnostic approach to detect TB infection among patients with HIV.

Some limitations could be noted for the current study-e g, the number of participants was lower in the active TB group than LTBI and uninfected ones. The immune response was not investigated in subjects with negative QFT-Plus, which might be attributed to false-negative results.

In conclusion, the results of the current study, conducted on household contacts of cases with active TB in two high TB burden provinces of Iran, indicated that IL-2 dynamic profiles, obtained by the utilization of commercially available kits, could be used to diagnose cases with TB infection. However, the study analysis revealed that this test cannot discriminate between active TB and LTBI with acceptable sensitivity. These findings, thus, call for more prospective studies evaluating larger cohorts to determine the diagnostic value of IL-2 assay in the active TB and LTBI diagnosis.