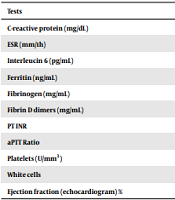 Cardiac Dysfunction in a Child with Severe Multisystem Inflammatory Syndrome

Albeit most children infected with SARS-CoV-2 are asymptomatic or have mild respiratory symptoms, similar cases of Kawasaki disease and toxic shock syndrome increased at the end of April 2020 worldwide. Systemic inflammatory involvement characterizes these cases and is part of the spectrum of a SARS-CoV-2-related syndromes called multisystem inflammatory syndrome (MIS-C).

We report the case of a child with severe cardiovascular impairment due to MIS-C who developed cardiogenic shock secondary to acute myocarditis. The pathophysiology of myocardial outcomes caused by MIS-C remains unclear.

We intend to contribute to new prospective studies on the early diagnosis, clinical management, and follow-up of patients with severe cardiovascular impairment secondary to infection with SARS-CoV-2.

The 2020 SARS-CoV-2 pandemic has evidenced that most infected children are asymptomatic or have mild upper airway symptoms; nevertheless, it is known that children have a significant impact on the virus spread (1). By April 2020, several countries had identified an increased prevalence of children with conditions such as Kawasaki disease (DK) and toxic shock syndrome (TSS), which were later learned to be part of the spectrum of a new disease related to a previous infection with coronavirus. This new disease was named multisystem inflammatory syndrome in children (MIS-C) by the Centers for Disease Control and Prevention (CDC) and the World Health Organization (WHO) (2, 3). Severe MIS-C cases present with acute myocarditis, coronary changes, arrhythmias, and cardiogenic shock (4, 5). However, the pathophysiology of myocardial dysfunctions remains unclear (6).

A previously healthy three-year-old boy had close contact with his grandmother, who was positive for SARS-Cov-2. Twelve days later, he presented with a sore throat and running nose. A week later, he presented with fever, rash in the upper body, and odynophagia, so amoxicillin and ibuprofen were started after medical evaluation. The following day, the rash spread to the trunk and lower limbs, the fever persisted, and the patient started vomiting, so endovenous hydration was initiated. The patient was sent home, but four days later, he entered the emergency room with dehydration, mental confusion, hypotension (arterial blood pressure 78 × 45 mmHg), tachycardia (heart rate = 145bpm), tachypnea (respiratory rate of 46 bpm), generalized edema, and hepatomegaly. He also presented non-purulent conjunctival hyperemia and pruritic erythematous-violet rash with a rough appearance on the face, upper limbs, lower limbs, and trunk; palms and soles were spared. In addition, the patient had mild laminar desquamation in the lower abdominal region. On admission, PCR-RT for SARS-CoV-2 was collected, but the result was negative. However, the chemiluminescence immunoassay (CLIA) technique for COVID-19 was positive on the following day.

The initial electrocardiogram showed sinus tachycardia, and the initial echocardiogram evidenced reduced ejection fraction (EF 50%) due to global hypokinesia and normal coronary arteries. Because the diagnosis of MIS-C was suspected, other laboratory tests were collected (Table 2).

Table 2. Laboratory Exams of the Patient on Admission and Discharge

The initial intensive care consisted of milrinone (up to 0.3 mcg/kg/min) and epinephrine (up to 0.3 mcg/kg/min) for 48 h. A broad-spectrum antibiotic treatment (100 mg/kg/day ceftriaxone and 40 mg/kg/day vancomycin) was also started due to the suspicion of toxic shock syndrome. On the second day of hospitalization, specific therapy for MIS-C, consisting of 2 g/kg human immunoglobulin and 80 mg/kg/day acetylsalicylic acid, was administered. Prophylactic enoxaparin was also added (1 mg/kg/day), and methylprednisolone pulse (27 mg/kg/day) was started according to the institutional protocol.

The patient stayed in the intensive care unit for seven days and was discharged on the following day with low-dose aspirin, corticosteroid therapy (2 mg/kg/day prednisolone), and enoxaparin.

The golden standard exam for the definitive diagnosis of myocarditis in pediatric patients is through myocardial biopsy, pointing inflammation findings through histological or immunohistological lesions (7). However, this exam is invasive and has high variability in sample interpretation. Such an examination is not performed in most cases, allowing a combination of clinical and imaging criteria to be valid for the diagnosis (7).

Sagar et al. (8) proposed a three-level clinical classification for myocarditis diagnosis based on levels of certainty: (1) definitive myocarditis; (2) probable acute myocarditis; and (3) possible subclinical myocarditis. For diagnosis, patients may have all or just some of the following findings: (1) elevation of cardiac biomarkers; (2) echocardiographic evidence of ventricular dysfunction without underlying structural defects, signs, and symptoms of ventricular dysfunction, electrocardiographic changes; (3) changes in myocardial magnetic resonance imaging (MRI); and (4) prodromal illness in the last two weeks (8).

As previously, our patient met the criteria for probable acute myocarditis. Moreover, the patient had positive serology for SARS-CoV-2, meeting the criteria for severe MIS-C according to the CDC and the WHO (9).

Our patient was younger than most of the other reported cases (5, 10) and presented myocardial dysfunction after infection with SARS-CoV-2. This manifestation has been described in many children diagnosed with MIS-C associated with significantly increased troponin and NT-ProBNP. As already acknowledged by Licciardi et al., infection with SARS-CoV-2 and the pro-inflammatory trend can trigger cardiac injury, post-myocardial injury, and vasculitis (11). However, the specific mechanism underlying MIS-C cardiac involvement has not been fully elucidated (2).

In a study about cardiogenic shock and hyperinflammatory syndrome in a group of young adults, the first manifestations of SARS-CoV-2 were biventricular failure and vasoplegia, which evolved into circulatory shock and multisystemic involvement, which may be similar to the involvement of our patient (12). In that study, the myocardial injury did not result from direct viral injury. The presence of high antibody titers suggested previous exposure, a few weeks before hospital admission (12).

In the present case, the patient was hypotensive and tachycardic when he was admitted to the emergency unit. Although the first echocardiogram was performed on vasoactive drugs, the left ventricle (LV) systolic performance was at the lower limit of normality. Grimaud et al. reported a case series of 20 patients with MIS-C who developed acute myocarditis. The prevalence of hypotension and tachycardia was 20%, median LV EF was 35% (25 - 55%), and LV function improved before discharge (10).

Some elements of the emerging pediatric disease MIS-C resemble those of Kawasaki's disease (KD) (10). In the case described here, the patient also met the criteria of atypical KD because he had a fever lasting over five days, bilateral not exudative conjunctival hyperemia, and polymorphic rash, corroborated by the laboratory changes (13).

Although KD can affect the myocardium, comparative articles have reported that myocardial involvement prevails when KD is related to SARS-CoV-2. This is corroborated by a study by Pouletty et al., who compared a historical cohort of KD with a cohort of KD associated with infection by SARS-CoV-2 in Paris and verified echocardiographic findings of myocarditis in 1 and 44% of the patients, respectively. On the other hand, coronary involvement was similar regardless of association with the virus, and coronary dilation occurred in 19% of the patients in both cohorts. The clinical characteristics of the two syndromes overlap probably because they have similar pathophysiological mechanisms (14). In both cases, an immune trigger is accelerated, causing an immune-mediated lesion in the heart and coronary arteries with different severity proportions. The overlap in the characteristics of the two syndromes may result from these similar pathophysiological mechanisms (15, 16). However, studies indicated that coronary changes are more likely to occur in KD, while cardiac dysfunctions are more frequent in patients with MIS-C. Remarkably, our patient did not present coronary enlargement.

Evolution to myocarditis and cardiogenic shock are possible outcomes in severe cases of MIS-C, demonstrating the severity of cardiovascular involvement. Pediatricians in emergency rooms should suspect this condition in children with cardiac dysfunction.

Although this study has shown cardiac involvement leading to cardiogenic shock in a patient with MIS-C under the average age reported in other studies, the mechanism of injury has not been fully elucidated. Thus, future studies are needed to document this mechanism and to assist in the recognition and treatment of patients with similar conditions.