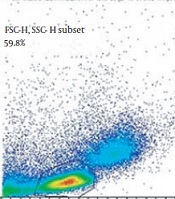 IL-17 producing T cells are a distinct subset of CD4+ T cells, which are recognized to have an essential role in protection against certain fungi and extracellular pathogens.

Seven newly diagnosed patients with documented Candida infections aged between 4 and 35 years were included in this study. Before establishing the diagnosis of chronic mucocutaneous candidiasis, a thorough immunodeficiency workup, including complete blood count, serum Ig levels and antibody responses, flow-cytometry evaluation, and LTT, was completed for all the patients, and other immunodeficiency disorders, including combined and phagocytic deficiencies, were ruled out. Then, IL-17 producing T cells were detected using antiCD3 and anti-IL-17 antibodies through flow-cytometry evaluation.

The IL-17 producing T cells significantly decreased in the peripheral blood of patients with PID and candida infections. A P-value of less than 0.05 was considered statistically significant.

To conclude, in cases of recurrent candida infections, initial assessment of IL-17 producing T cells may act as a predictor of an underlying primary immunodeficiency. In patients with low counts of IL-17 producing T cells, selecting a targeted panel of genetic tests may become more helpful in the detection of certain immunodeficiency disorders than performing whole-exome sequence analysis.

Seven newly diagnosed patients with documented candida infections (two males and five females) were included in this study, with their ages ranging from 4 to 35 years (mean = 15.71). All patients with fungal infections were referred to the immunodeficiency clinic of Mofid Children's Hospital for further evaluation from 2014 to 2015. Recurrent fungal infections were detected in the course of the disease of these patients and were finally confirmed by fungal culture. A thorough laboratory workup consisting of immunodeficiency screening tests including complete blood count, serum immunoglobulin levels and antibody responses, flow-cytometry evaluation, and Lymphocyte Transformation Test were completed for all the patients, which accordingly, combined immunodeficiencies and neutrophil defects were excluded. Meanwhile, seven age- and sex-matched healthy volunteers were asked to participate in the study as the control group. After taking informed consent from all the participants, the percentage of IL-17 producing T cells was detected in the peripheral blood of all the patients and the healthy controls.

The patients' information, including demographic data, parental consanguinity, clinical manifestations, the time and site of the initiating symptoms, the duration of the fungal infection, and the natural course of the disease, were recorded by a single researcher with personal clinical experience in this field to confirm the eligibility of the patients to participate in the study. Fresh venous blood was drawn in 10 ml EDTA tubes from the patients, and the healthy controls Peripheral Blood Mononuclear cells were isolated from the patients’ venous blood via Ficoll 1.077 (Biowest, Austria) gradient centrifugation. A total number of 6 × 106 PBMCs were stimulated with ionomycin (10-5 molar) and PMA (40 ng/ML) (both from Sigma-Aldrich, US) at 37°C with 5% CO2 for 12 hours. One hour after stimulation with ionomycin and PMA, Golgiplug (BD biosciences, US) was added to prevent cytokine release. After incubation, the cells were surface stained with anti CD3-PE-CY5 (BD biosciences, US). Then, they were fixed and permeabilized using BD cytofix/cytoperm solutions (BD biosciences, US). Afterward, intracellular IL-17 was stained using an anti-Il-17A-PE antibody (BD Biosciences, US). IL-17 producing T cells were identified as CD3+IL-17A+ lymphocytes.

The patients’ data were analyzed using SPSS version 19. The Mann-Whitney test was used to detect differences between healthy controls and patients. A P-value of less than 0.05 was considered statistically significant.

The study protocol conforms to the ethical guidelines of the 1975 Declaration of Helsinki and has been approved by the Institutional Ethics Committee of the Mofid’s Children Hospital.

We analyzed the quantity of circulating IL-17 producing T cells in patients with Candida infections associated with underlying primary immunodeficiency. One of the patients had a genetic diagnosis for CARD9 deficiency, and another patient fulfilled the clinical criteria for Job's syndrome.

Tables 1 and 2 are summaries of clinical and laboratory data of the patients, respectively.

Table 1. A Summary of Clinical Data of the Patients

Table 2. A Summary of Laboratory Data of the Patients

Table 3 demonstrates the percentage of IL-17 producing T lymphocytes in patients with candidiasis and healthy controls.

Table 3. A Comparison of the Percentage of IL-17 Producing Lymphocytes in Immunodeficient Patients with Chronic Mucocutaneous Candidiasis and Healthy Controls

As shown, IL-17 producing T cells decreased in the peripheral blood of patients with primary immunodeficiencies associated with candida infections.

Figure 1 demonstrates a comparison of the percent of IL-17 producing T cells in normal healthy controls and immunodeficient patients with Candida infections.

Figure 2 represents the flowcytometric graph of one of the patients.

Representative flowcytometric graphs of a patient; a. A dot plot of forwarding scatter (FSC), and side scatter (SSC) to gate lymphocytes, and b. A dot plot of CD3-PE-CY5 and IL-17A-PE; Double positive cells are considered Th17 lymphocytes.

Here are some limitations to this study. The first limitation of the study was the small size of the patients studied. Immunodeficiency disorders are rare disorders, among which CMCs are few in frequency, and therefore, a low number of these patients were anticipated at the beginning. The other limitation was that the studied patients had initially undergone immunologic screening evaluations by other physicians. Therefore, both phagocytic and combined immunodeficiencies were excluded according to lab findings. There were also no recurrent systemic and/or opportunistic infections in the clinical course of the disease. Hence, the patients were referred to us with an already established diagnosis of CMC. The results of the first evaluations were not available at the time of reporting the study (marked as NA in Table 2).

To conclude, in cases of recurrent candida infections, the initial assessment of IL-17 producing T cells may act as a predictor of an underlying primary immunodeficiency. In patients with low counts of IL-17 producing T cells, selecting a targeted panel of genetic tests may be more helpful in identifying the specific immunodeficiency disorder at an early stage than performing whole-exome sequence analysis.

Copyright © 2022, Author(s). This is an open-access article distributed under the terms of the Creative Commons Attribution-NonCommercial 4.0 International License (http://creativecommons.org/licenses/by-nc/4.0/) which permits copy and redistribute the material just in noncommercial usages, provided the original work is properly cited.
download pdf 310.76 KB Get Permission (article level) Import into EndNote Import into BibTex
Number of Comments: 0