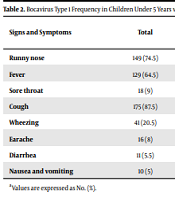 Human Bocavirus (HBoV) is a parvovirus associated with mild to severe upper and lower respiratory tract infections in children.

This study aimed to detect the virus in the nasopharynx of children under 5-year-old with respiratory infection by polymerase chain reaction (PCR).

Two hundred samples were taken from children referred to pediatric clinics in Kerman, southeastern Iran, with respiratory infections and were positive for virus by PCR. Next, the positive samples were genotyped by real-time PCR.

According to our findings, HBoV could be one of the causes of infections in the respiratory system of children, and the only type in the studied region is HBoV-1.

Acute respiratory infections are the most common childhood diseases in young children worldwide. These infections are more common and much more severe in children under five years old (1) and are even the leading cause of death in children at this age (2), as have been noted to account for one-quarter to one-third of deaths in these children. Human bocavirus (HBoV), belonging to the parvoviridae family and bocavirus genus, is a new virus found in the respiratory secretions of children. The HBoV genome contains three open reading frames (ORF)with ORF1 at the 5' end encoding nonstructural protein NS1, ORF2 encoding nonstructural protein NP1, and ORF3 at the 3' end encoding two structural proteins, VP1 and VP2 (3). The HBoV has been isolated from children with bronchiolitis, wheezing, coughing, fever, and runny nose (4). The rate of HBoV co-infection with other respiratory viruses is 52.7%, while co-infection with the respiratory syncytial virus is 80% (5).

The HBoV has been isolated from immunocompromised children and adults. This virus has also been associated with otitis media as one of the most common infectious diseases during childhood. Several studies have shown the relationship between middle ear infections and acute respiratory infection (6). Clinical signs of infection with HBoV include a fever of over 39°C, leukocytosis, cough, pneumonia, and occasionally diarrhea. The HBoV prevalence worldwide is 1.5 - 18.3%, and respiratory infections due to this virus have been reported in children (7). It has been isolated from the respiratory secretion of children with respiratory diseases and is reported in the cooler months of the year from different parts of the world, including Australia, North America, Europe, Asia, and Africa. There are no particular treatments for HBoV infection, and symptomatic care is the pillar of therapy. Bronchodilators may have a negligible advantage for bronchiolitis similar to RSV infection.

HBoV1 can be considered the primary genotype in Iran (8). The present study aimed to investigate the presence of HBoV in the cases of respiratory infections in children under five years old in Kerman, southeastern Iran. Proper and timely diagnosis of the disease will increase the chance of an appropriate and rapid treatment reducing the healthcare costs.

The research proposal was approved by the Ethics Committee of Kerman University of Medical Sciences with the number 98001263 and the ethics approval code of IR.KMU.REC.1399.009. During the fall and winter of 2018, children aged 1 month to 5 years, who had the symptoms of upper airway infection, with or without fever, were included in this study at Besat Clinic affiliated to Kerman University of Medical Sciences. Written consent was obtained from the selected patients in case of their agreement for participation in the study. A pediatric infectious disease specialist examined the patients, and nasopharyngeal swab samples were collected. Demographic characteristics and clinical signs, including fever, cold symptoms, diarrhea, vomiting, otitis media, and lung involvement, were recorded in a form. Patients with apparent diagnoses, such as influenza or bacterial colitis, were excluded.

A total of 200 nasopharyngeal swab samples were collected and transported to the laboratory in the shortest possible time and kept at -70°C until tested. Sampling and testing were performed with standard precautions to reduce the risk of virus transmission to the laboratory staff. The conserved regions of all types of HBoV genomes are located in the nonstructural region NS1. The primers were selected using AlleleID version 6.01 to maximize intraspecies similarity. In addition, if appropriate, the maximum interspecies heterology was used (Table 1). In humans, primers cover the left-hand untranslated area of the bocavirus genome and the initial part of the NS1 gene. In the present study, we selected the HBoV1 primers and the antisense HBoV3 primer (HBoV3R) from areas with the lowest similarity to other bocaviruses. The hydrolysis probe sequence was detached from an area fully preserved in all four identified bocaviruses. In the multiplex PCR, a mix of primers and hydrolysis probes was intended to identify all specified kinds of baculoviruses. In the single PCR, primers were prepared to differentiate between HBoV1, HBoV3, and HBoV2/4. We synthesized all oligonucleotides using Metabion (Metabion, Germany). We labeled the hydrolysis probe with the reporter fluorescein amidite (FAM) dye and the quencher dye BHQ1. The sequence of hydrolysis probe was (FAM)-CCAGAGATGTTCACTCGCCG (BHQ1).

Table 1. Sequence Primers and Probe for Multiplex and Single PCR

All reactions of PCRs were performed using Rotor-Gene 6000 (Corbett Research, Australia), in a volume of 25 µL. The singleplex reactions consisted of 1X TaqMan Master Mix (Amplicon, Denmark) with 0.5 µM of sense and antisense primers, 0.2 µM probe, 5 µL of DNA template, and molecular biology-grade water to prepare a total volume of 25 µL. All reactions were similar using all primers. The amplification was conducted as 35 cycles of 15 sec at 95°C and 40 sec at 60°C. Fluorescence was automatically determined by the Rotor-Gene software version 1.2.1 in a green channel for FAM dye (Rotor-Gene, Corbett Research, Australia). Relative or absolute frequency, mean ± SD, and the chi-square test were used for descriptive statistics. The SPSS software version 19 was used for data analysis.

Table 2. Bocavirus Type 1 Frequency in Children Under 5 Years with Respiratory Infection Based on Clinical Signs

The mean age of cases with bocavirus infection was 18.92 months, and there was a relationship between age and the prevalence of bocavirus so that there were more infants under 10 months among the positive cases (Table 3). The prevalence of bocavirus is shown in Table 3. Among infants aged 11 - 20 months, 7 cases (53.8%) were positive, and 38 patients (20.3%) were negative for bocavirus. It was observed that 3 (23.1%) and 24 (12.8%) of the infants under 10 months were positive and negative for bocavirus, respectively. In other age groups, only one case was detected. No positive case was detected among children aged 31 - 40 months. The full spectrum of health conditions associated with HBoV needs to be further assessed. However, similar to other respiratory pathogens, it could cause upper and lower respiratory tract infections. This study did not reveal any complications in follow-up, and no death was reported.

Table 3. Bocavirus Prevalence in Children with Respiratory Infections Under 5 Years by Age a

Nevertheless, the frequency of sole infections in the present investigation was lower than in China (18.2%) (11), and higher (4%) than another study from Iran (12), and similar to India (6.6%) (13). Seasonal distribution of HBoV can be detected because they differ based on the geographical region. Some studies reported a higher prevalence of such infections during winter and spring (14), while others reported a higher prevalence in the first summer days (15). However, several researchers reported no clear seasonal pattern (16). In Iran, HBoV infection is said to be seasonal, with a higher incidence in winter and late autumn (12). Co-infection may result in seasonal overlap with different respiratory viral pathogens circulating simultaneously (17).

In this study, HBoV was mainly found in infants under 10 months at the age of benefiting from maternal antibodies. This suggests that maternal antibodies to HBoV may not fully protect children in early infancy. Our data consistently shows that infants and toddlers are at increased risk of such infections, and the disease is more common in those under 2 years (18). Our results revealed that the age range was not correlated with disease symptoms and severity in children under 5 years. previous studies suggested that age is not directly related to clinical manifestations and disease severity in HBoV infection, and even age did not have a relationship with viral load (7). We could not confirm or reject the abovementioned evidence due to the applied design and the number of participants in the current study.

The HBoV-1 was the only genotype identified in the present study and the previous reports from Asia and other parts of the world (15). The molecular epidemiology of HBoV-1 has been evaluated in Iran (10). Nevertheless, the obtained viral sequence was insufficient to report any temporal and spatial features. Molecular properties of several strains of HBoV from Iran and other Middle Eastern countries can be used to enhance our understanding of the virus dynamics.

We did not study the underlying diseases among children infected with HBoV. A few participants referred to healthcare facilities in this region of southeastern Iran. Therefore, the participants of the present research do not represent the whole country, and making conclusions about the virus effect is not possible. To increase our awareness about the epidemiological pattern of this infection and to investigate its clinical relevance, further research with more participants is required. To better understand the seasonality and burden of HBoV infection, continuous monitoring is needed throughout the country.

According to the findings of the present study, HBoV causes infections in the respiratory system of young children, especially in winter. Exclusively HBoV-1 was detected, in line with the assumption that this particular genotype is associated with respiratory infections in our region.

We sincerely thank Professor Arabzadeh, Ms. Nikpour, and Ms. Iranmanesh for their cooperation, guidance, and conducting the tests.