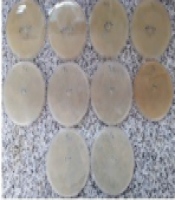 Global growing infections by multi-drug resistance (MDR) or extensively drug-resistant (XDR) bacteria are a serious public health problem which can increase the rate of mortality and morbidity even in children. Carbapenem is the last choice therapy in case of antibiotic-resistant bacteria presence.

This study aimed to evaluate the easy to use method to identify carbapenemase producing bacteria which include in CLSI.

In this descriptive study, 125 carbapenem-resistant and 97 carbapenem-susceptible gram-negative bacteria were included. PCR was used to identify carbapenemase enzymes include VIM, IMP, KPC, NDM-1, SPM-1, OXA-48 as a gold standard method. The modified carbapenem inactivation method (mCIM) was employed to phenotypically identify carbapenemase-producing bacteria. Some modifications were made to the CLSI proposed mCIM to ensure more accurate results in contrast of PCR.

The OXA-48 is the most prevalent detected carbapenemase and SPM-1 was not detected in any of strain. The results of the mCIM according to CLSI guide line demonstrated 100% sensitivity to define carbapenemase-producing bacteria. However, in the cases of non-carbapenemase-producing bacteria, only 4% of mCIM test results were consistent with the outcome of PCR. Decrease of the incubation time and the consider 15mm as a break point could increase the accuracy of mCIM against PCR.

The results of this study endorse that mCIM test is a valuable method to detect carbapenemase producing bacteria if the three hours consider instead of 4 hours with 15mm break point.

The treatment of carbapenem-resistant gram-negative bacteria infections in children can be a sensitive and complex issue. Expert consultation and clinical individualized approach was required to therapeutic decisions (1). Carbapenem are extremely effective β-lactam antibiotics presented into clinicians subsequent the appearance of extended-spectrum β-lactamases (ESBL) producing bacteria (2-4). In recent years, gram- negative bacteria capable of producing enzymes that confer resistance to wide range β-lactam antibiotics, like carbapenems have observed (5-8). It can lead appearance multi-drug resistance (MDR) or extensively drug-resistant (XDR) bacteria and it is a serious public health threat worldwide (2, 3, 9-11). The limitation of therapeutic options in infections due to MDR or XDR bacteria have been labeled as an imminent threat to global public health (5). Moreover, longer duration of hospital stays and the consequently increased health-care costs and also, high rate of morbidity and mortality due to carbapenem- resistant bacteria are posing serious challenges to the clinical management (12).

Carbapenemase enzymes confer resistance to broad-spectrum β-lactam antibiotic and it is a one of the important carbapenem resistant mechanisms in gram-negative bacteria (11, 12).

The carbapenemase producing genes can spread rapidly among bacteria because the most of them located on the movement and transferable genetic elements (11-14). In this regard, carbapenem resistant entrobactericeae was recently scheduled as one of the critical-priority bacteria by the World Health Organization (WHO) (15).

Carbepenemase producing gram-negative bacteria are one of the most problematic due to confer resistance to broad-spectrum β-lactam antibiotic, clonal spread and horizontal gene transfer, (11, 12, 15). Some rapid and cost-effective methods are used to detect carbapenemase producing bacteria and sometimes to detect the specific type of carbapenemase like double disc, Modified Hodg Test (MHT), Carba-NP Test and modified carbapenem inactivation method (mCIM) (10, 12, 14, 16, 17). Some of these methods are recommended by the 20th edition of the Clinical & Laboratory Standards Institute (CLSI) such as Carba-NP Test and mCIM (17). On the other hand, some of them was recommended by CLSI 2017 (18) but removed from CLSI 18 like MHT (19). Therefore, development of rapid and accurate detection methods is necessary to identify carbapenemase producing bacteria and it is the first and important step to inhibit spread of them in health care centers.

This study aimed to evaluate mCIM to identify carbapenemase producing gram- negative bacteria which introduce in CLSI in the recent versions.

In addition, 97 carbapenem-susceptible gram-negative bacteria such as E. coli, K. pneumoniae, and Enterobacter spp. were incorporated.

Modified carbapenem inactivation method test was conducted according to CLSI guide line (21). It is explained briefly, one microliter of enterobacteriacea family and 10 μL of P. aeruginosa and A. baumannii from an overnight plate were inoculated to 2 mL TSB for each tested bacteria. Vortexes 10 - 15 seconds and add one meropenem (10 μg) to each tube and incubated in 32 ± 2°C for 4 hours ± 15 minutes. Remove the meropenem disc from each tested tube and placed it on inoculated MHA by E. coli ATCC 25922.

(3) Indeterminate: Zone 16 - 18 mm. The presence or absence of a carbapenemase cannot be confirmed

In this study, 100 carbapenem resistant and susceptible bacteria were calculated by considering the sensitivity and specificity of 85% and 90%, respectively of this test to identify carbapenemase enzymes.

The results of the mCIM test performed in compliance with CLSI guideline on carbapenemase-producing bacteria exhibited 100% sensitivity for identification carbapenemase producing strains even in A. baumannii. However, in non-carbapenemase-producing bacteria, only 4% of mCIM test results were found to be consistent with the outcome of the molecular test. Therefore, the specificity of mCIM to the routine protocol is very low, measured at 4%. The results of the modification CLSI guideline for mCIM test showed that the inhibition zone of the meropenem disc in T0 of both E. coli reduced in contrast of meropenem in routine antibiotic susceptibility testing. Also, after one hour and a half, the carbapenemase-producing strain could inactivate the meropenem disc. Moreover, the inhibition diameter zone around the carbapenem disc for ATCC E. coli was found to be in the resistance range and it remained stable for four hours (Table 2). In E. coli ATCC 25922, the inhibition zone was reduced up until 15mm after three hours and it remained stable for four hours. The results of mCIM in E. coli ATCC 25922 and carbapenemase producing E. coli observe in Figure 1.

The first plate in both part of pictures related to take meropenem disc on culture of E. coli ATCC without put it on TSB and according to usual disc diffusion method.

Carbapenem are the last of the choice of antibiotic therapy in some cases especially to presence the ESBL producing gram-negative bacteria (3, 11, 13). Rapid and accurate detection of carbapenem resistant bacteria especially carbapenemase producing strains has very important role to inhibit the circulation of these bacteria in the hospital and health care centers (6, 12, 16). Modified carbapenem inactivation method test was introduced by CLSI to detect carbapenemase producing enterobactericea family and P. aeruginosa (19, 21). But the results of the current study showed that maybe some of the modifications are necessary to achieve the more accurate and specific results. These changes could also make this test available for A. baumannii. In this study, the results of mCIM according to CLSI guide line revealed the good sensitivity (100%) but very low specificity (4%). This low specificity indicates that, this test shows very false positive results after four hours. The inhibition zone of E. coli ATCC was 30 mm before suspend in broth medium and it became 27 mm after just suspend in broth medium just for some seconds and became 17 mm after half of hour. Therefore, these processes indicated that in the modified mCIM test the charge of meropenem disc became less immediately after suspend in broth medium. This event can observe smaller inhibition zone around meropenem and this event has nothing to do with the ability of the bacterium to produce the carbapenemase enzyme. According to the results of this study, break point of 15 mm diameter of inhibition zone consider for negative carbapenemase strain could be give the more accurate respond and the intermediate respond become more narrow.

The results of this study recommend that mCIM test is a valuable method to detect carbapenemase producing if the three hours consider instead of 4 hours with 15 mm break point. So, this rapid and accurate method to detect the carbapenemase producing bacteria can help to speedy better antibiotic therapy and subsequently causes a decrease the rate of mortality and morbidity in children.

Copyright © 2022, Author(s). This is an open-access article distributed under the terms of the Creative Commons Attribution-NonCommercial 4.0 International License (http://creativecommons.org/licenses/by-nc/4.0/) which permits copy and redistribute the material just in noncommercial usages, provided the original work is properly cited.
download pdf 2.00 MB Get Permission (article level) Import into EndNote Import into BibTex
Number of Comments: 0