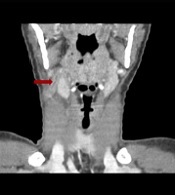 Lemierre’s syndrome (LS) is a rare and serious condition that often affects school-aged children, adolescents, and healthy young adults. It is defined as an oropharyngeal infection with secondary septicemia, internal jugular vein thrombosis, and septic emboli. Rare cases of atypical LS in which thrombosis occurs in other locations have been reported.

To this date, no reports of LS presenting with isolated thrombosis of the facial vein have been described in pediatric patients. We highlighted the importance of early recognition of LS and its atypical variants. Pediatric international guidelines regarding its management and treatment would also greatly affect the outcome of these patients.

This disease was first described in 1936 by Lemierre and was particularly common in the preantibiotic era (4). After the introduction of penicillin, its incidence lowered remarkably to such an extent that some authors referred to it as the “forgotten disease” (5). Nevertheless, since the late 1980s, there has been a resurgence of LS for reasons that are not yet fully understood (5, 6). Rare cases of atypical LS in which thrombophlebitis occurs in other locations have been reported in the literature (7).

Due to its low incidence, the absence of pathognomonic symptoms, and the lack of awareness of this condition, its early recognition and prompt treatment remain a challenge, usually resulting in a delayed diagnosis and appropriate treatment, which accounts for a worsening prognosis (8). We presented a case of an adolescent with atypical LS with thrombophlebitis of the facial vein and secondary pulmonary septic embolism.

A 17-year-old previously healthy female was admitted to the emergency department with recent-onset fever and mild sore throat. She did not report cough or dyspnea. Physical examination was normal, and the patient was discharged from the hospital. The next day the adolescent returned, complaining of a worsening sore throat and high fever. Physical examination revealed oropharyngeal hyperemia with tonsillar exudate and bilateral small cervical lymph nodes. The rapid antigen group A Streptococcus test was negative, and the patient was discharged with the diagnosis of viral acute pharyngitis/mononucleosis.

On the third day of symptoms, the patient returned to the emergency department with a persistent high fever (40 - 41ºC). Vital signs revealed a febrile (40.4°C), tachycardic (126 beats per minute), and normotensive (119/67 mmHg) adolescent with a respiratory rate of 22 breaths per minute and peripheral oxygen saturation of 98%. No further findings were apparent on physical examination. However, the patient complained of persistent acute cervical pain, and a blood panel and computed tomography (CT) scan of the cervical region were requested. A laboratory investigation revealed leukocytosis (20070/μL) with neutrophilia (88.5%; 17760/μL) and elevated serum C-reactive protein (CRP) (304.4 mg/L). Viral serologies were positive for Epstein-Barr virus (EBV) IgG, consistent with prior resolved infection. Coagulation testing results were normal. A cervical CT scan showed a heterogeneous right tonsil and small cervical lymph nodes, with no further findings. The chest radiograph was normal. Blood cultures were collected.

At this point, the diagnosis of complicated tonsillitis was considered, and the patient was admitted to the hospital and began treatment with intravenous ceftriaxone (2 g every 12 hours). The day after admission, the patient started coughing, complaining of dyspnea and anterior right thoracic pain. No signs of respiratory distress were apparent, and the respiratory rate, oxygen saturation, and pulmonary auscultation were normal. Physical examination was normal at this stage, except for a remaining painful small mass in the right upper cervical area. The chest radiograph showed diffuse mild perihilar bilateral infiltrate (Figure 1), and cervical Doppler ultrasound revealed right facial vein thrombophlebitis. A new blood panel was requested and showed elevated D-dimers (1402.6 ng/mL), 14 460 leukocytes/μL, and 130.7 mg/L CRP. Cervical, cerebral, and thoracic CT angiography (CTA) were performed, and several pulmonary septic emboli were found throughout the pulmonary parenchyma (Figure 2). Cervical CTA confirmed thrombophlebitis of the right facial vein and excluded thrombosis in other locations, including the internal jugular vein (Figures 3). No cervical abscesses were identified. Cerebral CTA was normal. An echocardiogram was executed and excluded cardiac valve vegetation. 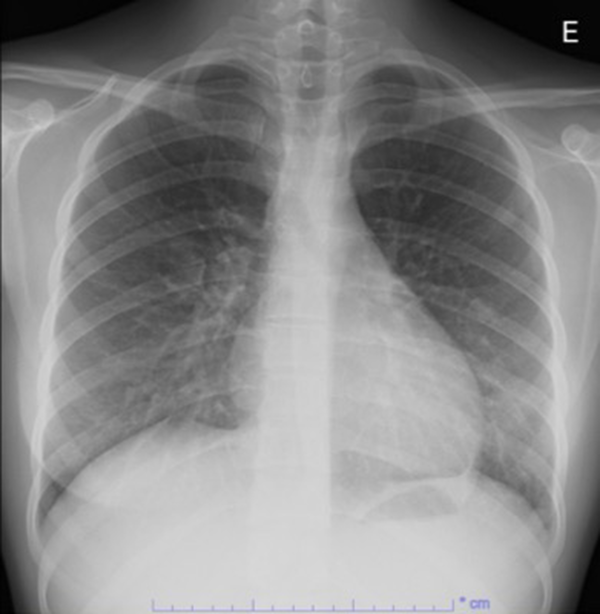 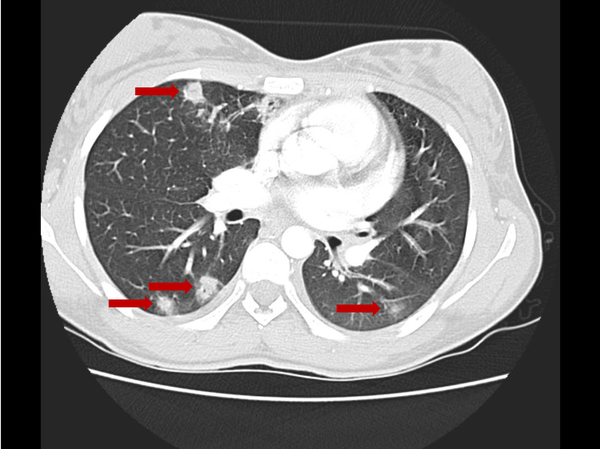 Cervical computerized tomography angiography (coronal and transverse sections): thrombophlebitis of the right facial vein (arrows). Thromboses in other locations were excluded, and no abscesses or collections were visualized.

Due to the severity of LS and its potentially fatal complications, the patient was transferred to a tertiary hospital, where a pediatric intensive care unit would be available in the case of respiratory failure, as well as vascular surgery in the case of surgical treatment. During hospitalization, the patient remained hemodynamically stable, and respiratory symptoms (such as dyspnea and chest pain) resolved with no need for oxygen therapy. Blood and pharyngeal exudate aerobic and anaerobic cultures were negative. Despite antibiotic therapy, the patient remained febrile for 5 days after admission. In total, the patient underwent a 22-day cycle of ceftriaxone and 23 days of clindamycin. On the nineteenth day of hospitalization, the radiologic study was considered normal. Reassessment with Doppler ultrasound confirmed recanalization of the thrombosed vein after 30 days, and anticoagulation was suspended. At discharge, the patient had no symptoms, and her physical examination was normal. A multidisciplinary follow-up was ensured, and a year after the symptoms’ onset, the patient did not appear to have any sequelae or relapses.

In the pediatric population, the most common course of pharyngitis is resolution within the first week of symptoms. When the disease lasts longer than expected, presents worsening symptoms, or a painful unilateral mass of the neck emerges, other conditions should be suspected, such as pharyngeal abscess and LS (9, 10). Unfortunately, the latter is often only considered after the dissemination and development of potential life-threatening sepsis. In LS, primary infection is usually associated with tonsillitis, followed by spreading into the lateral pharyngeal space and soft tissues of the neck. Consequently, perivenular inflammation and thrombophlebitis occur over the course of the next 3 weeks (11, 12).

The diagnosis of LS and LS variants is clinical and can be supported by radiologic findings in the absence of a positive culture (9). The diagnosis is confirmed by the occurrence of thrombophlebitis of the internal jugular vein (which may extend to contiguous veins or venous sinuses) and isolation of anaerobic bacteria in cultures, namely, F. necrophorum (9, 10, 13). Other bacteria, such as Arcanobacterium, Streptococcus, and Staphylococcus, also may act as primary agents of LS (11). However, one-third of patients with LS have polymicrobial infections (2, 3).

In this case, the diagnosis of LS was considered unlikely on admission; therefore, anaerobic cultures were not collected before starting antibiotic therapy, which may have compromised the results of our cultures. Nevertheless, once atypical LS was suspected, new blood cultures were collected (before starting intravenous clindamycin), but still, no bacterial growth was confirmed.

In LS and its variants, the development of thrombophlebitis increases the probability of septic embolization. The most common embolization locations are the lungs (85% to 92% of patients), causing cough, pleuritic chest pain, or hemoptysis, but other organs may be affected (8). Severity ranges from septic shock (up to 7% of patients)/intensive care admission (58% of cases) to mild cases with no embolization. Mortality varies between 5% and 18% in the literature (14). In this case the patient did not smoke, was not under any kind of medication (including contraceptive pill) and did not have any other known risk factors to thrombosis.

Cases of atypical LS have been reported in adults, usually involving the external jugular vein, superior ophthalmic vein, and facial vein (7, 15-18). Due to the rarity of this syndrome in the pediatric population, there are very few reports of atypical presentations. The most common thrombosis locations are the external jugular vein and sigmoid, cavernous, and transverse sinuses (19, 20). To this date, no reports of LS presenting with isolated thrombophlebitis of the facial vein have been described in pediatric patients.

The management of LS and LS variants includes mainly supportive care and antibiotic therapy. The most common empiric antibiotic regimens include penicillin/beta-lactamase inhibitor or carbapenem and clindamycin or metronidazole due to beta-lactamase-producing strains and anaerobes (9, 12, 14, 21). Metronidazole has good tissue penetration (including into the infected clot), high intracellular levels, and a favorable bioavailability profile, allowing an easy switch to oral therapy. A minimum of 3 weeks of antibiotic treatment should be completed. Some authors recommend 6 weeks to improve fibrin clot penetration (22). The patient completed three weeks of antibiotic therapy with a favorable evolution. If collections are present, surgical drainage may be indicated (8, 22).

Prompt treatment is associated with a favorable evolution and prognosis. Poorer outcomes are associated with delayed treatment (2, 13). Pleuropulmonary emboli, pleural effusions, empyema, and abscesses are all potential pulmonary complications of LS (2, 13).

Anticoagulation therapy remains a controversial matter in LS, as in another septic thrombophlebitis. Anticoagulation can induce clot destabilization, originating further septic emboli and disease dissemination. Some authors consider that thrombosis associated with LS resolves spontaneously (23). However, no controlled trials validate this practice. Anticoagulation has been recommended when thrombosis extends into the cerebral sinuses and clots are large or bilateral or in cases of disease progression (21, 23). In this case, due to the metastatic embolization with several pulmonary septic emboli throughout the pulmonary parenchyma, anticoagulation with low molecular weight heparin was started.

In this case, the diagnosis was extremely challenging since there were no reports of atypical LS presenting with isolated thrombophlebitis of the facial vein in pediatric patients. Moreover, the risk of life-threatening complications and the lack of pediatric guidelines regarding the approach of LS and its variants contributed to the difficult management of this patient.

In conclusion, this condition must be considered in pediatric patients with fever, dyspnea, chest pain, and a recent history of oropharyngeal infection. Anaerobic culture collections are recommended in these cases. We highlighted the importance of early recognition of LS and its atypical variants to improve prognosis.

Copyright © 2022, Author(s). This is an open-access article distributed under the terms of the Creative Commons Attribution-NonCommercial 4.0 International License (http://creativecommons.org/licenses/by-nc/4.0/) which permits copy and redistribute the material just in noncommercial usages, provided the original work is properly cited.
download pdf 3.43 MB Get Permission (article level) Import into EndNote Import into BibTex
Number of Comments: 0