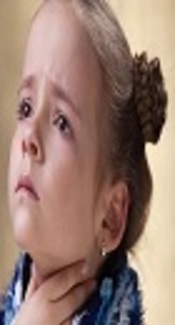 Acute respiratory infection plays a major role in hospitalization of children worldwide and viruses are one of the most important causative pathogens of acute respiratory tract infections (ARTIs). Human metapneumovirus (hMPV) is a respiratory pathogen responsible for ARTIs in infants and children around the world. The epidemiology of hMPV in the northeast of Iran is poorly described. This study aims to evaluate the prevalence and molecular types of hMPV in children under the age of 12 along with clinical relevance in northeast Iran.

In this cross sectional study, from autumn 2015 to spring 2016 (nine months), 150 nasopharyngeal swabs were collected from children with ARTI and were evaluated for the presence of hMPV by reverse transcriptase-polymerase chain reaction (RT-PCR) technique; after that hMPV typing on positive samples was performed using PCR method.

This study, for the first time, reports the existence of Human metapneumovirus virus in children with respiratory symptoms in northeastern Iran. We have also shown that the genotype A is the predominant circulating type among our patients.

Acute respiratory infection plays a major role in the hospitalization of children in the entire world. A wide range of bacterial and viral pathogens are responsible for acute respiratory tract infections (ARTIs), and newly emerging pathogens are reported every few years. Viruses are one of the most important causative agents of ARTIs, considered as the second leading cause of death and the primary cause of hospitalization in children (1-5). Due to worldwide incidence and also high prevalence of morbidity and mortality, respiratory viral infections, which easily spread, pose a serious public health problem (1-6). While Influenza virus, Para influenza virus, rhinovirus, and RSV are considered to be the most common respiratory viruses, the role of other new viruses such as hMPV in ARTI of children remains unknown; therefore, in this study we decided to determine the prevalence of hMPV in children with ARTI in northeastern Iran.

Van den Hoogen reported the isolation of a novel virus from nasopharyngeal aspirate samples taken from young children with respiratory tract infections in the Netherlands in 2001 (6). After that, human metapneumovirus has been reported as a respiratory pathogen repeatedly in children as well as in the elderly and the immune compromised host in different countries worldwide (1-6).

This virus is a new member of the family Paramyxoviridae, subfamily Pneumovirinae, and genus Metapneumovirus based on electron microscopy and molecular studies (7, 8). Like other members of the Paramyxoviridae family, hMPV is an enveloped, single-stranded, and negative-sense RNA virus. The genome is approximately 13.3 kb in length. Its genome encodes eight proteins (N, P, M, F, M2, SH, G, and L). According to the genetic property of the membrane glycoproteins F and G, hMPV has been divided into two main genotypes, A and B, that are in turn further subdivided into four subgroups A1, A2, B1, and B2 (9, 10).

hMPV is a causative agent of upper and lower respiratory tract infections in children and bronchiolitis in infants similar to that observed with RSV infection (11-16).

The symptoms related to hMPV range from a severe cough, fever, rhinorrhea, and influenza like symptoms to bronchiolitis, pneumonia, and wheezing attack (2, 17-19). Diagnosis of hMPV infections is now carried out by sensitive molecular techniques such as reverse transcription RT-PCR or, to a lesser extent, by isolation of virus in cell cultures and RT-PCR (20).

This study aims to determine the hMPV frequency in children with respiratory infection symptoms aged less than 12 years old, in Bojnurd and also determining the genotypes of hMPV in positive samples.

During October 2015 to June 2016, all children with acute respiratory tract infection (ARTI) symptoms referred to Imam Reza hospital, Bojnurd were included. Finally, nasopharyngeal swabs were collected from 150 children. Children less than six and more than 72 months as well as non compliant patient or patient’s legal guardian were excluded from this study. Samples were collected using a dacron swab that was preserved in a tube containing one mL PBS buffer. Samples were rapidly stored at -70°C until used.

Extracted RNA were used for detection of hMPV genome by the reverse transcriptase polymerase chain reaction with the common pair primer targeting a region of hMPV F gene described by Arabpour et al. (Gen Bank accession number AF371367) (21). The sequence of the forward and reverse primers used were, 5’-GCGCGTTCTGAGGACAGGTTGG-3’ and 5’- GCGCTCAAGCCGGATGGTTTTGG-3), respectively. PCR was performed using Genetbio Prime Taq premix 2X master mix (Korea). The PCR program comprised an initial denaturation at 95°C for 10 minutes, followed by 40 cycles of denaturation at 94°C for 1 minute, annealing at 57°C for 1 minute and extension at 72°C for 1 minute, and a final extension at 72°C for 10 minutes.

Amplified products were analyzed on 2% agarose gel by electrophoresis. Negative samples for hMPV genome were checked for the accurate performance of extraction and RT steps by carrying out a PCR reaction on RT products for Beta 2 microglobulin.

The statistical analysis was performed by SPSS 11.5 (Statistical packages for the Social Sciences, Chicago, IL). Chi-square and Mann-Whitney U tests were used for comparisons between positive and negative groups. A P value of less than 0.05 was considered statistically significant in all conclusions.

The study was performed in accordance with Helsinki declaration on human research. Parental written informed consent, from all participants and children assent in possible cases, was obtained. The research proposal was reviewed and approved by local ethical committee in North Khorasan University of Medical Sciences (numbered IR.NKUMS.REC.1394.67).

A 289 bp bond corresponding to amplicon size of Metapneumovirus was observed on gel electrophoresis (Figure 2). The positive samples were further subjected to more molecular investigation. Among positive samples, 30 (96.8%) belonged to genotype A and one (3.2%) of the positive cases was nontypable (Figure 3). 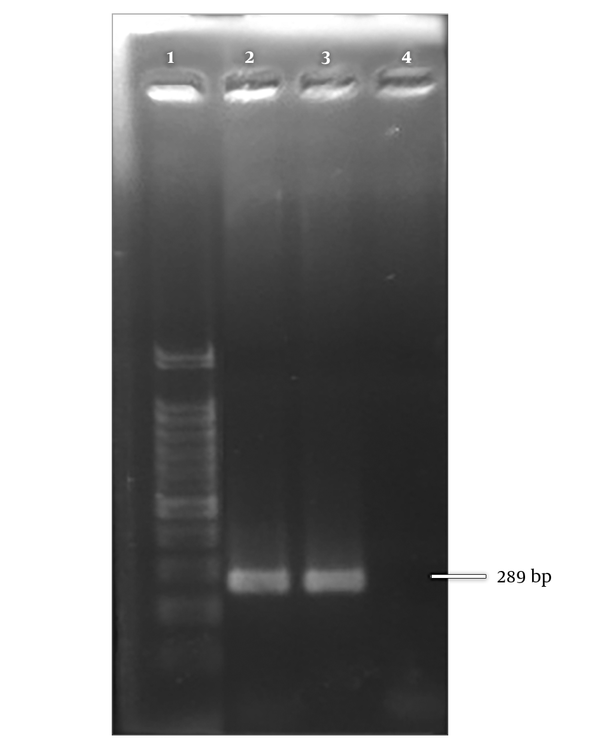 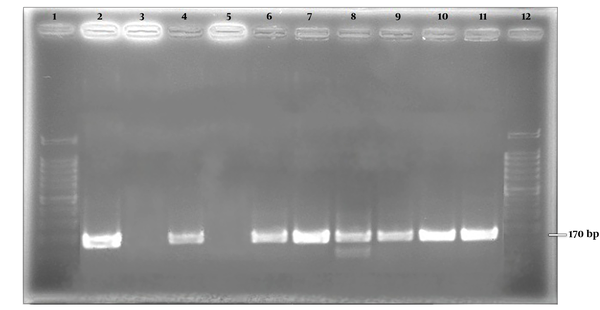 Human metapneumovirus (hMPV), a newly pathogen of pediatric respiratory tract, is related to a wide range of respiratory symptoms from the common cold to pneumonia and bronchiolitis (1-6). In our attempt to identify this pathogen among children with respiratory tract infection symptoms, hMPV was detected in 31 out of 150 admitted cases (20.6%) indicating hMPV as a relatively common virus among these patients in Bojnurd, Iran.

A different frequency was reported by Arabpour et al. in Ahvaz-Iran where hMPV was positive in 54.4% of their samples in 2008 (21). Moattari et al. in 2010, reported that hMPV was detected in 16.6% of patients suffering from wheezing in Shiraz-Iran (3). Pancer et al. in 2014, reported that hMPV was positive in 8.7% of children with acute viral respiratory tract infection in Poland (22). In another study, Maffey et al. reported that only 10% of patients with acute wheezing were positive for hMPV; that was lower compared to our findings (23). These differences and similarities were also seen in other studies. Chan et al. in 2003, evaluated the prevalence of hMPV in severe acute respiratory syndrome (SARS). They reported 52.1% of hMPV colonization in SARS patients (3). Ebihara et al. in 2004, evaluated the hMPV Infection in Japanese Children. They reported hMPV in 36.8% of wheezy bronchitis, 26.3% of upper respiratory tract infection, 22.8% of bronchitis, and 14.0% of pneumonia patients (5). Peiris et al. reported different results of hMPV rate in various respiratory diseases. The virus was found in 36% of pneumonia, 23% of acute asthma, and 10% of acute bronchiolitis patients (24).

In concurrence with other studies (3, 21), the most common clinical symptom in hMPV positive children in this study were cough (100%) and wheezing (87%).

About 10% of our positive patients suffered from asthma. The association of hMPV and acute asthma symptoms have been reported by different studies (25-27).

In our study, prevalence of hMPV among male (45%) and female (55%) patients were almost similar. This result is in agreement with those of other studies (5, 21). Although in some studies, significant differences were detected, for example Moattari et al. reported that the prevalence of hMPV was three times greater in males than females (2).

In this study, sampling was performed during October to June; thus, our results could not be generalized to the whole year, though most studies have reported higher infection rates during winter and spring (2, 3, 7, 23, 25).

No positive samples were found in children older than 6 years. This finding could indicate that the acquisition of hMPV infection occurs early in life and leads to becoming immunologically resistant to the infection (29).

It should be noted that we did not rule out the presence of other respiratory viral pathogens in our hMPV positive children, therefore we can not conclude that hMPV was the sole causative agent of all ARTI in this study. To exact determination of hMPV role in ARTI of children should be further investigated in multi pathogen massive screening studies.

This is the first report of prevalence and genotypes of human metapneumovirus (hMPV) in children in northeastern Iran. The relatively noticeable frequency of hMPV (20.6%) indicates the clinical importance of this virus, especially type A, in our region. The rapid identification of these viral infections could help reduce the use of antibiotics and improve treatment and management strategies.

We would like to thank Mrs. Toktam Memariani for helping us in the laboratory procedures and also Ms. Somayeh Shatizadeh for scientific support.

Copyright © 2018, Author(s). This is an open-access article distributed under the terms of the Creative Commons Attribution-NonCommercial 4.0 International License (http://creativecommons.org/licenses/by-nc/4.0/) which permits copy and redistribute the material just in noncommercial usages, provided the original work is properly cited
download pdf 917.60 KB Abstract XML Get Permission (article level) Import into EndNote Import into BibTex
Number of Comments: 0