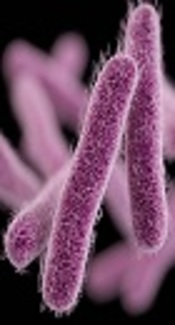 The aim of the present study was to determine the prevalence and drug susceptibility patterns of Shigella and Salmonella species in addition to the detection of extended-spectrum β-lactamase producing isolates among diarrhea samples of pediatric patients.

A total of 5300 diarrheic samples from children were examined for the presence of Salmonella and Shigella species. Biochemical and microbial tests, as well as specific polyvalent antisera, were used for the identification of the bacterial species. Antibiotic susceptibility tests and extended-spectrum β-lactamase detection were conducted by disc diffusion and combination disc methods, respectively.

Diarrhea, as a major health problem, is considered a leading cause of morbidity and mortality, especially among children, in developing countries (1). Salmonella and shigella species are two major enteropathogenic bacteria, which, along with Enterotoxigenic Escherichia coli (ETEC) and Campylobacter, account for the most diarrheal infections in the developing world. Human salmonellosis, being more prevalent among children under 5 years of age, causes more than one billion disease cases annually, 3 million of which lead to death across the world (2, 3).

In addition, about 200 million Shigella infections and 3 - 5 million deaths occur annually in developing countries, most of which affect children under 5 years of age (2). Epidemiological data have shown that Shigella sonnei (S. sonnei) is the predominating Shigella species in Europe and USA while Shigella flexneri (S. flexneri) is more frequent among Asian and African countries (4). In Tehran, until 2003, the dominant species was S. flexneri, but it was later replaced by S. sonnei (5).

Salmonella and particularly Shigella species are increasingly acquiring resistance to commonly used antibiotics, most importantly to third-generation cephalosporins (3GC), as the main drug of choice for the treatment of Salmonella and Shigella infections, through the production of extended-spectrum β-lactamases (ESBLs) (6-9). Data on local antibiotic resistance patterns are essential to have an empiric antibiotic treatment guideline adapted to the local microbial epidemiology (10).

The aim of the present study was to determine the prevalence and drug susceptibility patterns of Shigella and Salmonella isolates in addition to the detection of ESBL producing isolates among diarrhea samples of pediatric patients.

A cross-sectional study was conducted from 2012 to 2016 on pediatric patients admitted to the children’s medical center (CMC) hospital in Tehran, Iran, to assess the prevalence and drug susceptibility patterns of Salmonella and Shigella species, in addition to the detection of ESBL producing isolates. Single stool samples from each of the 5,300 diarrheic children were examined for the presence of Salmonella and Shigella species. All the patients, admitted with the clinical signs of acute diarrhea or enteric fever, had an Iranian nationality with an age range of 1 - 10 years old.

All the suspected colonies grown on XLD were analyzed by routine biochemical and microbiological tests (11). Specific polyvalent antisera (Baharafshan Co., Iran) were used for the serotype identification of Salmonella and Shigella species.

SPSS version 22 was used for the analyses and P value ≤ 0.05 was considered significant.

The distribution of Salmonella and Shigella species according to the sex and age of the patients and their distribution among different hospital’s wards are respectively shown in Tables 1 and 2.

Table 1. Distribution of Salmonella and Shigella Species According to the Age and Sex of the Patientsa

Table 2. The Distribution of Salmonella and Shigella Species Among Different Hospital Wardsa

With 96.2% resistance to ampicillin, 85.4% to co-trimoxazole, 39.5% to cefotaxime, and 37.3% to nalidixic acid, S. flexneri was the most resistant isolate among all the Shigella isolates tested.

On the other hand, Salmonella serogroups had significantly higher resistance to nalidixic acid compared to Shigella species (P < 0.001).

The results of the antibiotic resistance patterns and ESBL detection tests for the Salmonella and Shigella isolates are presented in Table 3 and Figure 1. 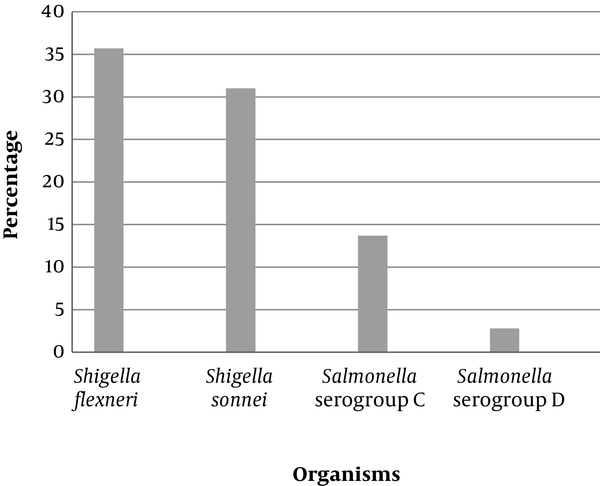 This discrepancy may be due to the levels of public health and the availability of safe drinking water among populations, the source of samples, sample size, geographical distribution, the season in which samples were collected, differences in personal hygiene and the age of the target group.

Based on the results of the present study, low levels of Salmonella resistance was observed to ampicillin (12%), which is lower than that reported by Jimma (59.3%) (15) and Harar (71.4%) (14). Salmonella isolates were highly susceptible to cefotaxime (94.1%), which was similar to that found by Hamze et al. (23) but dissimilar to the findings of Bialvaei et al. (9).

In this study, S. sonnei (60.8%) was the most common Shigella species followed by S. flexneri (39.2%), which is in contrast with the results of studies by Jomezadeh et al. (18) and MoezArdalan et al. (24) that showed S. flexneri as the most prevalent Shigella species in Abadan and Karaj, respectively. Our results, however, are in agreement with the results of studies from Shiraz and Tehran (25, 26), confirming recent reports claiming a change over the last years in the prevalence of Shigella spp. in Tehran (5).

In this study, most of the Shigella isolates were resistant to ampicillin and co-trimoxa-zole, which is in accordance with the previous studies from Iran (18, 27) and other countries such as Nepal (28) and India (29). The wide use of co-trimoxazole and ampicillin, as broad spectrum and low priced empirical treatments for diarrheal diseases (30), has led to the advent of resistance of Shigella strains to these antibiotics. According to the results of the present study, these two antibiotics are no longer suitable choices for the treatment of Shigella infections. It seems that resistance to nalidixic acid, as the first line of treatment for diarrheal infections, is on the rise in Iran. A study carried out in 200 - 2003 by MoezArdalan in Iran showed that only 1% of the Shigella isolates were resistant to nalidixic acid (24), whilst our study showed a rise of 47.4% resistance to this antibiotic. In other countries, like India, the resistance of S. sonnei to nalidixic acid was reported as 94% - 100% (31, 32).

ESBL producing Shigella species can be problematic in near future and therefore, treatment guidelines should be designed to monitor the emerging ESBL producing isolates at a national level (21).

High rates of antibiotic resistance may result from the uncontrolled or inappropriate use of antibiotics. This can cause antibiotic-resistant bacteria to spread easily between hospital wards, leading to protracted outbreaks with high mortality and morbidity rates (35). The epidemiological information and monitoring system are, therefore, necessary to control Salmonella and Shigella infections in public health sectors.

This study provided information on the prevalence and antimicrobial susceptibility patterns of Salmonella and Shigella infections in Tehran, Iran. The antimicrobial resistance patterns suggest the widespread resistance of Shigella to ampicillin and co-trimoxazole, which requires specific attention because co-trimoxazole is considered the drug of choice for the treatment of patients with inflammatory diarrhea. Due to the continuous change in antibiotic resistance profiles, Salmonella and Shigella strains should be under-scrutinized surveillance in order to monitor local susceptibility patterns for the administration of appropriate antibiotics.

A special note of thank goes to Children's Medical Center Hospital in Tehran for providing patients specimen, as well as epidemiological and demographic data.

Copyright © 2018, Author(s). This is an open-access article distributed under the terms of the Creative Commons Attribution-NonCommercial 4.0 International License (http://creativecommons.org/licenses/by-nc/4.0/) which permits copy and redistribute the material just in noncommercial usages, provided the original work is properly cited.
download pdf 150.66 KB Get Permission (article level) Import into EndNote Import into BibTex
Number of Comments: 0