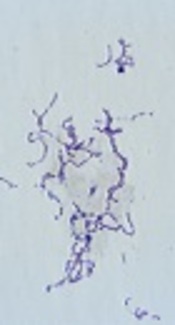 We describe the case of a 10-year-old girl with an unusually severe and complicated episode of acute septic arthritis due to Streptococcus dysgalactiae, and systematically review the literature describing osteoarticular infections with this organism.

A 10-year-old girl with hereditary sensory and autonomic neuropathy type 5 and chronic (Charcot) arthropathy of the right knee presented with severe swelling and warmth of the right knee associated with 2 days of fever. She was ultimately diagnosed with septic arthritis of the right knee due to S. dysgalactiae. Her subsequent clinical course was abnormally prolonged and complicated, requiring an 8-week hospitalization, 7 arthrotomies and 8 months of total antimicrobial therapy.

Group G Streptococci, including S. dysgalactiae, are unusual causes of septic arthritis. Our patients’ clinical course was more severe than typically seen with more common osteoarticular pathogens. We conducted a systematic review of the literature on this condition, which demonstrated 7 previously reported cases of septic arthritis due to this pathogen in children, and also review the most current nomenclature and classification scheme for the organism.

Acute septic arthritis is one of the most common orthopedic infections in children (1). Overall, otherwise healthy children are most commonly affected, though children with pre-existing orthopedic pathology, if infected, may suffer more severe outcomes (2). Though most often caused by Staphylococcus aureus, septic arthritis may be caused by a variety of pathogens, often influenced by host and other epidemiological factors (1). Given the relative rarity of many atypical osteoarticular pathogens, systematic and comprehensive descriptions in the literature are often lacking. We present a 10-year-old girl with Charcot arthropathy of the right knee who developed an unusually severe septic arthritis due to S. dysgalactiae, with a systematic review of the literature.

A 10-year-old girl with hereditary sensory and autonomic neuropathy type 5 (HSAN-5) and neuropathic (Charcot) arthropathy of the right knee and ankle presented with 2 days of fever, vomiting, and acutely worsening inflammatory changes of the right knee. Given the inability to experience and report pain associated with her diagnosis of HSAN-5, as well as the chronic nature of her swollen knee, the exact time course of her illness was unclear. At the time of physical examination, she was febrile to 38.1 degrees, with a grossly swollen right knee with increased warmth, though with no overlying erythema or discharge. Her laboratory values at presentation were remarkable for a normal white blood cell count, an elevated erythrocyte sedimentation rate (ESR) at 76 mm/hour and an elevated C-reactive protein level (CRP) at 38.6 g/dL (normal < 0.3 g/dL). A review of the electronic medical record demonstrated previously normal ESR and CRP values across her multiple prior visits to our institution. Plain films of the involved joint revealed chronic dystrophic changes consistent with her previously diagnosed Charcot arthropathy, including fragmentation of the patella and destructive changes of the distal femur and proximal tibia. Contrasted magnetic resonance imaging (MRI) of the right knee revealed a large effusion with synovial inflammatory changes as well as the aforementioned dystrophic abnormalities of the femur and tibia. She was admitted with concern of septic arthritis of the right knee and an inability to exclude a concomitant osteomyelitis. Bone biopsy was not performed. Blood cultures at admission were sterile.

Seven arthrotomies of the right knee over the first 34 days of her hospital stay (hospital days 1, 4, 6, 9, 11, 18 and 35, including a complete synovectomy on hospital day 18) persistently produced purulent synovial fluid. Synovial fluid cultures also consistently yielded S. dysgalactiae (a Group G Streptococcus) as determined by matrix-assisted laser-desorption/ionization time-of-flight (MALDI-TOF) even after 3 surgeries and 9 days of parenteral antibiotic therapy with vancomycin and ampicillin. Her isolate was susceptible to penicillin (MIC = 0.32 µg/mL) and presumed resistant to clindamycin based upon the results of D-zone testing. Susceptibilities to other antimicrobial agents were not determined. Ultimately, the patient transitioned to high-dose ampicillin monotherapy (400 mg/kg/day divided every 6 hours) and eventually demonstrated sterile synovial fluid by the ninth hospital day. Her hospital course was further remarkable for intermittent fevers for 34 days in the hospital and elevation of her CRP for 47 days.

Ultimately, she completed 8 weeks of ampicillin therapy as an inpatient, followed by 6 months of amoxicillin therapy as an outpatient given an inability to exclude a chronic osteomyelitis. Repeat serum ESR and CRP values after 6 months of antimicrobial therapy were normal. Plain radiography of the right knee 1 year after presentation demonstrated progressive charcot changes of the knee joint with continued fragmentation and sclerosis of the surrounding bones.

A comprehensive review of the literature was undertaken on July 1st of 2016 and repeated on July 26th of 2017 in an effort to identify cases of osteoarticular infections (septic arthritis or osteomyelitis) due to Group G Streptococci (GGS). Each time, PubMed was searched utilizing the terms “Streptococcus dysgalactiae”, “Streptococcus equi”, “Streptococcus canis” or “Group G Streptococcus” in combination with “Septic arthritis”, “Pyogenic arthritis” or “Osteomyelitis”, with filters consisting of the Pediatric age group, the English language and Human subjects. This search strategy produced 14 total articles, with one relevant report (3). Removal of the filters produced two additional relevant reports (4, 5). Web of Knowledge was searched with the same terms, producing 389 articles with two relevant reports not found on PubMed (6, 7). Citation tracker was utilized on Web of Knowledge, and references were searched from all relevant reports for additional cases with none identified. The references from four systematic reviews of GGS infections found during the search were perused as well, producing one additional article (8). The search was repeated again on March 2nd, 2018 with no additional cases identified.

Altogether, 6 publications describing 7 cases were identified. The reports were published between 1989 and 2017, with patient ages varying from 30 days to 14 years (Table 1). A variety of joints were involved, with no apparent predilection for any specific location. All patients with evaluable data made a full recovery. All but one child were previously healthy. A 14-year-old girl with vertebral osteomyelitis suffered from Gaucher’s disease and had a prior history of osteomyelitis of the tibia (5). Five isolates were identified as GGS, while two were identified as Streptococcus dysgalactiae subspecies equisimilus.

The classification and nomenclature surrounding GGS has been the source of much confusion, particularly as detailed phylogenetic characterizations of pyogenic Streptococci have become more available, highlighting the limitations of the older and less specific Lancefield classification system. Possession of the Group G streptococcal antigen has been described in S. dysgalactiae, S. equis and S. canis, with the term S. dysgalactiae originally utilized to describe what were felt to be exclusively bovine streptococcal isolates (9). In 1983, DNA hybridization studies suggested that S. dysgalactiae and S. equisimilus expressing Lancefield group G antigens actually comprised a single species, S. dysgalactiae (10). In 1996, S. dysgalactiae was further sub-divided into two separate sub-species, Streptococcus dysgalactiae subsp. equisimilis (representing human isolates) and Streptococcus dysgalactiae subsp. dysgalactiae (representing animal isolates). Though S. equi and S. canis had been shown to express the Group G antigen as well, they were still classified as different species (9). In 2012, phylogenetic reconstruction based upon multilocus sequence analysis (MLSA) and 16S rRNA gene sequencing demonstrated that S. dysgalactiae, S. canis and S. pyogenes were all part of a separate clade of the genus Streptococcus, while S. equi was actually relatively divergent from these species (9). S. dysgalactiae subsp. dysgalactiae and S. dysgalactiae subsp. equisimilis represented two distinct clusters, with the former corresponding to animal isolates and the latter corresponding to human isolates (9). Of note, the emm gene (encoding the M protein found in many species of pyogenic Streptococci, including S. pyogenes) was carried by all isolates of S. dysgalactiae subsp. equisimilis analyzed in the study (9). Unfortunately, though the use of MLSA and 16s rRNA sequencing is very sensitive and accurate for the identification of Streptococcal species, it is beyond the capability of commercial microbiology laboratories, most of whom may continue to utilize Lancefield classification for reporting. Use of MALDI-TOF for bacterial identification, however, may provide an opportunity for commercial laboratories to obtain more accurate identification of pyogenic streptococci to the species level as MALDI-TOF is capable of correctly identifying 66% of S. dysgalactiae and 100% of S. canis isolates (11, 12). Although insufficient data exists to categorize different species of Streptococci expressing the group G antigen as possessing varying virulence or being associated with worse outcomes, knowledge of the species or sub-species involved in the infection may still be clinically useful. Though all species of GGS appear routinely susceptible to penicillin, susceptibility to non-beta-lactam agents is not as predictable, and appears to vary by species or sub-species (13). Such information may be useful in the care of the penicillin-allergic patient.

Our patient demonstrated a very complicated and prolonged hospital course for a child with septic arthritis, having spent 8 weeks as an inpatient, with fevers persisting for 5 of those weeks and requiring nearly 7 weeks prior to normalization of her CRP. In addition, it was not until her ninth hospital day, her fourth surgery and her ninth day of parenteral antimicrobial therapy active against the isolate that her synovial fluid cultures sterilized. This latter finding is particularly noteworthy given the exquisite susceptibility of these isolates to penicillin (13). It remains unclear whether her diagnosis of HSAN type 5 heightened our patient’s risk for acquiring septic arthritis with the organism. However, given the inability to experience pain associated with this condition, as well as her extreme charcot arthropathy (indicative of repetitive, unappreciated trauma), a post-traumatic inoculation or subsequent transient bacteremia seeding a chronically inflamed joint was certainly possible. Of note, a similarly increased risk of joint infection with GGS has been reported in adults with chronic joint disease (e.g. rheumatoid arthritis, osteoarthritis) (2). Severe, disseminated infections have also been reported in immunocompetent adults without chronic joint disease (14). More than likely, her charcot arthropathy also contributed to her complicated clinical course as well, and may have prolonged her healing process. It is also possible that her HSAN-5 is associated with an occult immunodeficiency, though no specific immunologic disorders have been consistently reported in the literature with this condition. In addition, analysis of her T-cell subsets, natural killer cell levels, immunoglobulin levels and Pneumococcal serologies after immunization were all unremarkable when assessed 10 months after her presentation and 4 months after completing her course of antimicrobial therapy.

Our literature review attempted to be as encompassing as possible, and utilized terms incorporating both the Lancefield classification (GGS) as well as more specific species terminology (S. canis, S. equi and S. dysgalactiae). We believe this is the first such systematic review of this condition in the Pediatric literature.

GGS septic arthritis is rarely described in children. Contrary to previously described cases, our patient exhibited a prolonged and complicated clinical course requiring numerous repeat arthrotomies. This may be attributable to her pre-existing Charcot arthropathy, a phenomenon previously described in adults. Physicians caring for children with osteoarticular infections should be aware of this group of pathogens, and request outside confirmation of the species identification if this information is not available at the clinical microbiology laboratory involved.

Copyright © 2018, Author(s). This is an open-access article distributed under the terms of the Creative Commons Attribution-NonCommercial 4.0 International License (http://creativecommons.org/licenses/by-nc/4.0/) which permits copy and redistribute the material just in noncommercial usages, provided the original work is properly cited.
download pdf 95.94 KB Get Permission (article level) Import into EndNote Import into BibTex
Number of Comments: 0