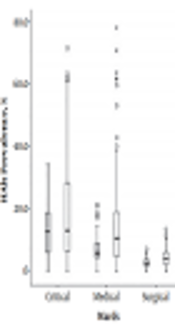 Prevalence of Healthcare-Associated Infections in Pediatric Wards of Nemazee Teaching Hospital in Shiraz: A Comparison with the Whole Hospital

The risk of healthcare-associated infections (HAIs) in the developing countries can be up to 20 times greater than the developed countries.

This cross-sectional study was conducted in Nemazee Teaching Hospital in Shiraz. We used registered data that was reported monthly during a one-year period (March 20, 2016 to March 20, 2017). Statistical analysis was performed using SPSS software.

Healthcare-associated infections (HAIs) are an increasingly recognized problem in hospitals (1). The World Health Organization (WHO) has reported that the risk of HAIs in the developing countries can be up to 20 times greater than in the developed ones and the proportion of infected patients regularly exceeds 25% (2, 3).

It is estimated that more than 1.4 million people worldwide contract hospital infections (4, 5). This high rate of nosocomial infections leads to more antibiotic usage and higher emergence of antibiotic-resistant microorganisms (6). Reports show that the prevalence of HAIs varies from 6% to 27% in some developing countries (3). However, the results of a systematic review on the burden of HAIs indicated that this rate varies between 5.7 and 19.1 per 100 patients with a pooled prevalence of 10.1 (7).

A surveillance study across 95 large hospitals in Iran performed by the Iranian Center of Disease Control (ICDC) demonstrated that the prevalence of HAIs was about 0.57% during 2012 through 2014. Undoubtedly, this is an underestimation that could be due to an inefficient hospital surveillance system in the country (8). Another study carried out in two large cities of Iran, Mashhad and Shiraz, showed the overall prevalence rates of HAIs to be 0.8% and 9.4%, respectively (9).

In Iran, HAIs have the highest prevalence in intensive care units (ICUs; 26.7%), and they are associated with considerable morbidities, mortalities and costs (8, 10-12). Based on the site of HAIs, previous studies in Iran have presented different results. Although ICDC has reported urinary tract infection (UTI) as the most (32.2%) and bloodstream infection (BSI) as the least common infections (16.3%) (8), a study in Qazvin, Iran, revealed respiratory tract infections (RTIs) to be at the top of the list of HAIs (13), and another study in Mashhad, Iran, also showed the most frequent HAI was pneumonia (25%), followed by UTI (20%), and BSI (19%) (9). It is worth mentioning that, the most common HAIs are different between adult and pediatric populations. Although most studies have indicated that UTI is the most common infection, investigations on the pediatric population reported BSI as the most prevalent infection (8, 14-17).

This retrospective cross-sectional study was a hospital-wide survey performed in Nemazee Teaching Hospital with 1000 beds in southwest of Iran. We used the registered data of the hospital reported every month during a one-year period (March 20, 2016 through March 20, 2017). Overall, 9,560 hospitalized patients were included in this study. All the wards were actively screened by trained infection control personnel and the reported cases were reviewed and screened further by an infectious diseases subspecialist experienced in infection control. The criteria for the diagnosis of infection were based on the instructions of the National Ministry of Health that are very similar to ICDC guidelines (23).

The reported prevalence was based on the information of 75% of the whole hospital. For more convenience, we divided the data into whole hospital and pediatric wards. Hospital wards were also classified into three main ward types, namely critical care (10 for adults and 6 for children) medical (14 for adults and 6 for children) and surgical wards (6 for adults and 2 for children). The critical care wards included 15 ICUs, 3 coronary care units (CCU) and 2 organ transplant units. Four major HAI types including BSIs, RTIs, UTIs and surgical site infections (SSI) were recorded and compared among wards.

Statistical analysis was performed using SPSS, version 21. To compare the differences in the prevalence of HAIs in the three main wards between the pediatric wards and the whole hospital, one-way analysis of variance (ANOVA) was used. Independent samples t-test was run to determine the relationship between similar wards (critical care, medical, and surgical) in the pediatric wards and the whole hospital. P value less than 0.05 was considered significant. Table 2. Comparison of Mean Differences in the Rates of Healthcare-Associated Infections in Each Ward Between Pediatric Wards and the Whole Nemazee Hospital

The overall prevalence rate of HAIs in the whole wards of Nemazee Hospital was 11.38%, while it was 7.77% in the pediatric wards. In a study by Gravel et al. the prevalence of HAIs among the pediatric population was reported 8%, which was somewhat similar to our finding (24). The difference in HAIs prevalence between adults and children has been also mentioned by Foster and Sabella (25). The probable reasons for lower HAIs in pediatric wards could be more hand hygiene compliance by both health care providers and parents, shorter length of hospitalization in pediatric patients and less co-morbidities in children than adults.

In the whole hospital, the most frequent HAIs were UTI (36%), followed by BSI (25%) and RTI (24%). This is in line with a surveillance study across 95 large hospitals in Iran that showed UTI was the most prevalent infection (8). In addition, a similar study that was also conducted in Shiraz showed that UTI is the most frequent site of nosocomial infections (15). The pattern of common infections in pediatric wards was different from that of the whole hospital; the most common infections were BSI (15%), lower RTI (10%) and SSI (6%), respectively, which is consistent with previous findings (16, 24). In a study by Zingg et al. and two studies in Brazil and Italy, BSIs were mentioned as the most prevalent types of HAIs in children (14, 16). Another study in pediatric wards of Isfahan reported RTI as the most common HAIs (26). A similar study in Shiraz pointed at BSI as the most prevalent HAI (27). This showed how a separate survey on adults and children can affect the reports.

Although BSI was the most common infection in pediatric wards, it was 10% more prevalent in the whole hospital as the second prevalent infection. Higher prevalence of BSI in pediatric wards may be due to the presence of multiple risk factors such as their immature immune system and probably more usage of central vascular catheters in pediatric wards that is also mentioned in previous findings (16, 24). Peripheral intravenous access in children, especially infants and young children, is more difficult than in adults, so after many fruitless trials a central line is inserted for them. Thus, indwelling central catheterization and lower age can be recognized as risk factors for HAIs (28).

Regardless of the site of infection, the most common microorganism causing HAIs was Acinetobacter that was responsible for 16.99% of the total HAIs in the whole hospital. Similar to the present study, Meric et al. and Gladstone et al. noted that Acinetobacter was one of the most contaminating microorganisms (22, 29, 30).

Comparison of HAIs in different wards showed higher rate of HAIs in critical care wards in both pediatric and whole wards of the hospital. However, this rate was lower in pediatric wards. The mean rates of HAIs in pediatric medical and surgical wards were approximately half of the mean HAIs rate in the whole hospital. This is consistent with previous studies in Iran that showed the highest prevalence of HAIs were observed in ICUs (8, 12, 13).

All types of infections were more prevalent in the whole hospital in comparison to the pediatric wards. These lower rates could be explained by better infection control practice in pediatric wards, less hospitalization duration of patients, more appropriate antibiotic usage, better hand hygiene compliance and other factors. However, in adult wards, strict adherence to hand hygiene practice, especially the WHO guidelines, on hand hygiene in health care should be considered to reduce the spread of HAIs (31-37).

An important limitation of this study was reporting prevalence based on the information of 75% of the whole wards. Although the neglected ones could somewhat affect the results, evidence showed that under the best circumstances, about 70% of the real prevalence of HAIs can be found in Iran (8). Therefore, improved HAIs detection and registry should be more emphasized in wards where cases of infection are still not reported. Moreover, the population examined in this study were admitted to a major teaching hospital and is not entirely representative of all hospitalized pediatric population in Shiraz city. Unfortunately, HAI databases of the hospital did not report catheter-associated infections, which should be considered in the future infection control strategies to have a more comprehensive research.

Regarding the contradictory results about the most common HAIs in different cities of Iran and in different hospital wards, risk factors should be studied in future studies. Moreover, it seems that sensitivity of caregivers and nurses leads to more infection control in pediatric wards, but this hypothesis needs more investigation.

The authors wish to thank all members of the hand hygiene improvement program, especially the matron and nursing supervisors, for their cooperation in the implementation of this study.

Copyright © 2019, Author(s). This is an open-access article distributed under the terms of the Creative Commons Attribution-NonCommercial 4.0 International License (http://creativecommons.org/licenses/by-nc/4.0/) which permits copy and redistribute the material just in noncommercial usages, provided the original work is properly cited.
download pdf 220.94 KB Abstract XML Get Permission (article level) Import into EndNote Import into BibTex
Number of Comments: 0