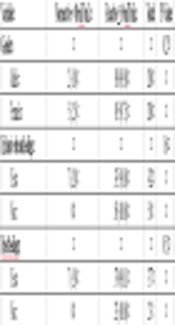 Since November 2014, pentavalent vaccine is available in Iran. This vaccine should be injected into all Iranian children at two, four, and six months after birth.

There is little information on the immunogenicity of this vaccine against hepatitis B (HB) in Iranian children; therefore, the current study aimed at investigating the vaccine efficacy six months after administration of the last dose.

A total of 400 blood samples were collected from one-year-old children referred to Karaj healthcare centers, Alborz province, Iran. After sampling, checklists of demographic information were completed. Blood samples were sent to the laboratory to determine antibody titer by CMIA (chemiluminescent microparticle immunoassay). Statistical analysis was conducted by Stata and SVY software.

The seroprotection of HB vaccine in a pentavalent combination vaccine in Iran, six months after three doses of vaccination, was acceptable.

Hepatitis B (HB) vaccine prevents acquisition of hepatitis B infection (HBI) that is a serious health issue worldwide. HBI may cause serious complications such as hepatocellular carcinoma (HCC), chronic liver failure, and cirrhosis (1). In 2015, about 887,000 people across the world died of cirrhosis and HCC (2). HbsAg (HB surface antigen) seroprevalence studies in 161 countries from 1965 to 2013 indicated that 3.6% of the world population had chronic HB virus (HBV) infection (3). In Iran, the prevalence of HBsAg positivity is 2% - 7%. Iran is located in the intermediate zone of global prevalence of HBI (4). In a systematic review of 46 articles on the effect of HB vaccination by Institute of Medical Microbiology and Hygiene, University of Regensburg, Regensburg, Germany, on a total of 28,329 individuals with anti-HBsAb titers of ≥ 10 mIU/mL, 5-20 years after primary immunization, showed that vaccination might cause 90% long-term protection in 17-year-old adolescents born to non-carrier mothers (5).

Numerous surveys demonstrated the positive health outcomes of HB vaccine in different age groups in Iran. A meta-analysis in Iran on 9356 subjects estimated the cumulative incidence of HBV breakthrough infection at 0.007 (95% confidence interval (CI): 0.005 - 0.010) after 5 - 20 years of primary vaccination series (6). Kabir et al. reported that HBsAb positivity rate in children born to HBsAg-positive mothers was 21.8% in group 1 (children with no history of HB vaccine and HB immune globulin (HBIG), 68.8% in group 2 (children with history of HB vaccination alone), and 85.7% in group 3 (children with both HB vaccination history and HBIG) (7). Intramuscular (10 µg) and intradermal (2 µg) administration of HB vaccine to neonates was compared in a study in Shiraz, Iran by HBsAb titer above 10 mIU/mL six and 18 months after routine HB vaccination in which HBsAb positivity was reported in 98.1% and 96.2% of neonates, respectively (8). The HB vaccination schedule in Iran led to acceptable immunogenicity before introduction of the pentavalent vaccine (7-12). The national immunization program was implemented in Iran on 21st March 1993. It was a recombinant vaccine produced by Karaj Pasteur Institute, Research Industrial Complex, Karaj, Iran (13). The HB vaccination schedule was turned to pentavalent as a combination vaccine from 18 November 2014.

Since there was little information on the immunogenicity of pentavalent HB in Iranian children, the current study aimed at estimating the serologic response rate to HB vaccine after administration of the third dose of pentavalent vaccine to 12-month-old children in Karaj, Iran in 2016.

The study was conducted from April to September 2016. Sampling was conducted by multistage cluster sampling. First, a list of 12 districts of Karaj city was prepared, six districts were randomly selected, and then three healthcare centers were randomly selected from each. From each center, 22 samples were selected by random sampling. Inclusion criterion was: healthy children aged one year with complete vaccination and normal growth. Exclusion criteria were: transfusion of blood and receiving intravenous immunoglobulin (IVIg) in the past three months, history of congenital or acquired immunodeficiency, and HBI history in infants and HBsAg positivity in parents according to medical records. Blood samples of infants were collected and centrifuged, and then the separated serum samples were stored at -70°C until the measurement of antibody titer for all samples. A checklist including information on gender and exclusively breastfeeding status was filled for each infant by a trained colleague. The antibody titer of infants was measured six months after the final dose of HB vaccine at six months after birth. The study protocol was approved by the Research Committee of Clinical Research Center on 25 July 2016 (approval code: Abzums.Rec.1395.44). Participation in the study was conditioned by parental consent and the parents were ensured that withdrawal of their infants from the study would not affect delivery of healthcare services to them. Antibody titer was estimated by CMIA (chemiluminescent microparticle immunoassay) by ARCHITECT Anti-HBs Reagent Kit (No. B7C180). Vaccine efficacy was expressed as percentage and estimated with 95% CI. Quantitative variables were expressed as mean ± standard deviation (SD). In order to estimate the effect of demographic variables on vaccine efficacy, logistic regression method was used. The impact of cluster sampling method employed in the study was also considered. Statistical analysis was conducted by Stata and SVY software.

Table 1. Relationship Between Reactive and Nonreactive HBsAb, and Gender and Breast Feeding Statea

The Iran’s immunization schedule with pentavalent vaccine started from 2014. Four doses of HB vaccine are used in this schedule. Three doses, in combination with DTP and H. influenza, are administered at two, four, and six months after birth as the pentavalent vaccine and another dose is injected at birth. It is therefore hypothesized that higher antibody response may occur due to another extra dose in the Iran’s immunization schedule.

Rostami et al. studied the HBsAb titer after vaccination in 90 infants 15 months after term and preterm vaccination at 0, 45, and 270 days with 10 µg/0.5 mL of the Cuban recombinant HBsAg Heberbiovac, and reported immunogenicity of 85.7% and 85.4%, respectively, with no association between gender and immune response (16). Moradi et al. in a study on 215 children aged 7 - 12 months, three months after vaccination at two, four, and six months after birth with HB monovalent recombinant vaccine licensed by Pasteur Institute, Iran, observed no relationship between gender and immunogenicity (HBsAb titer > 10 IU/L) of HB vaccine in male and female subjects (89% vs. 84.4%), with the total immunogenicity of 86% (17). In Vietnam, the immunogenicity of HB component of Quinvaxem® in 131 infants showed that 97.7% of cases were responders. To date, Quinvaxem® is used in more than 90 countries, with over 400 million doses of vaccine administered (18).The study results showed the same immunogenicity as the current one. In a review article, to investigate HBsAb titer after vaccination from 1987 to 2011 by the Centers for Disease Control and Prevention (CDC) in the United States, a total of 43 articles and 9368 infants from different countries were included. Antibody response in 30-day neonates through infancy was studied. Vaccines of different products were used, most of which were Engerix-B, Genhevac-B, Recombivax-HB, Heberbiovac-HB, and Euvax-B. Overall, the median seroprotection was reported 98% (ranged 52% - 100%) (19). Although different kinds of vaccines were used, the serologic response was acceptable in them. Pentavalent DTwP-HepB-Hib vaccine (Quinvaxem®) was produced by Crucell in Korea and was co-developed with Chiron Corporation, in March 2006; the Korea Food and Drug Administration approved Quinvaxem®. It was prequalified by the World Health Organization (WHO) in 2006 and is considered safe and immunogenic when used in EPI programs in primary and booster vaccination schedules. This vaccine was administered at six, 10, and 14 weeks of age in India, and one month after vaccination, protective HBsAb levels was 98% (20). This vaccine is a part of combined vaccines and according to the current study result, the immunogenicity of vaccination was high.

In a review study by Iran’s Ministry of Health and Medical Education on 28 published articles about HBsAb in children aged six months to 15 years up to 2014, a total of 5991 male and 4571 female subjects were included, 80% of them responded to vaccine; the vaccines used were Heberbiovac, Cuban vaccine, and Recombivax (21). A review article by Najafi et al. included 11 studies from 2000 to 2017 on a total of 3063 under five-year-old children with Heberiovac and Cuban vaccine; it reported the efficacy range of vaccine as 89% (95% CI: 86% - 93%) (22). After introduction of hexavalent vaccines in late 2000 in Germany (23), HBsAb titer ≥ 10 mIU/mL showed that vaccination might cause an acceptable 90% long-term protection of 5 - 20 years after primary immunization (5). Verma et al. studied antibody levels in 218 low birth weight and 265 normal birth weight infants that received pentavalent vaccine at six, ten, and fourteen weeks after birth; six weeks after the third dose of pentavalent vaccine, satisfactory antibody levels were observed in both groups (24). Their study showed more acceptable antibody level in children vaccinated with pentavalent at the lower age than the current study.

Since there was no publication on the immunogenicity of HB component of pentavalent vaccine in Iran, the protective level of 98.3% can be an important finding and seems satisfactory. The results regarding immunogenicity of this vaccine in combined hexa- and pentavalent vaccines in other studies and the current one showed the same results (18, 20). The advantage of the current study was the enrollment of an adequate number of subjects and obtaining reliable results since the measurements were done in a standard laboratory and the limitation of the study was the lack of information on antibody levels throughout the time lapse after vaccination.

The current study showed an acceptable antibody response to HB component of pentavalent vaccine in Karaj. This vaccine is used as a routine vaccine for children in Iran, but its efficacy in the prevention of HBI depends on many factors. Multicenter studies on antibody level and HBI screening can help to gather more information about the epidemiology of HBI in Iran.

Copyright © 2019, Author(s). This is an open-access article distributed under the terms of the Creative Commons Attribution-NonCommercial 4.0 International License (http://creativecommons.org/licenses/by-nc/4.0/) which permits copy and redistribute the material just in noncommercial usages, provided the original work is properly cited.
download pdf 128.70 KB Get Permission (article level) Import into EndNote Import into BibTex
Number of Comments: 0