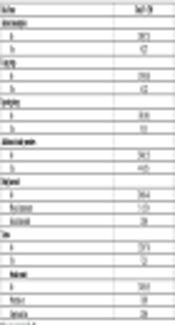 Prevalence of Hepatitis B, Hepatitis C, and HIV Infections in Working Children of Afghan Immigrants in Two Supporting Centers in Tehran and Alborz Provinces, Iran

Due to the increasing number of immigrations worldwide, the immigrants’ health assessment is a major issue especially in the working children of immigrants.

The implementation of neonatal HBV vaccination and prevention of mother-to-child transmission of HBV should be considered in Afghan immigrants in Iran.

With the increasing number of immigrations worldwide, the immigrants’ health assessment has a pivotal role in community health status (1). Afghanistan, Pakistan, Turkmenistan, and Iraq have the highest number of immigrations to Iran (2). The immigrants residing in Iran may have various problems such as disqualification to possess national identification card, temporary identity cards, and lack of legal work permit and medical insurance. These problems lead to inaccessibility of these groups to national health facilities, which in turn, may result in numerous health inadequacies, particularly among children. Such families chiefly live in slums and their children tend to work in areas such as metros, warehouses, grocery shops, Tailors’shops, supermarkets, farms, and even in houses to provide some goods. According to the last description, the children and youth that work and live in streets are known as working children (3). Due to the difficult circumstances in their family, most of these children are forced to work on the streets and insecure places in order to earn money for family expenses (4). Working children are at risk of infectious diseases including human immunodeficiency virus (HIV), hepatitis B virus (HBV), and hepatitis C virus (HCV) due to their exposure to the infectious agents (5-7). According to the previous studies, 20,000 to 2 million working children are living in Iran (6). Moreover, the prevalence of hepatitis B, hepatitis C, and HIV was high in working children (6). A few studies in several countries reported the prevalence of HBV, HCV, HIV, and other infections in working children (8-10).

The current study aimed at assessing the prevalence of HBV, HCV, and HIV infections in working children of Afghan immigrants in two supporting centers in Tehran and Alborz provinces in 2017.

The current cross-sectional study was conducted on working children of Afghan immigrants in two supporting centers in Alborz and Tehran provinces (Agh-Tappeh and Sarasiab supporting centers) using convenience sampling method in October 2017. The study inclusion criteria were the members of the two centers, aged 6 - 18 years old, working regularly to earn money for family expenses, and born to Afghan immigrants in Iran. All of the participants were born in Iran and benefited from supporting education and healthcare services in these centers. The questionnaire included items on demographic information such as gender, age, education, parental status, work category, working with garbage and sharp objects, and also the risk factors for transmission of blood-borne infections (BBI) such as alcohol and drug use, injecting drugs, addiction in family members, being harassed, and sexual contact. The questionnaire was filled by researchers through a confidential interview with participants. The Ethics Committee of the Baqiyatallah Research Center for Gastroenterology and Liver Diseases approved the study protocol, and all children participants signed written consent forms. The authors asserted that all procedures contributing to the current study comply with the ethical standards of the relevant national and institutional committees on human experimentation as well as those of the Helsinki Declaration of 1975, as revised in 2008.

3.2. Diagnostic Tests for HIV and Viral Hepatitis B and C

Table 1. Characteristics of the Study Participantsa

There are not enough data regarding the prevalence of infectious diseases among working children of Afghan immigrants in Iran. The current study found the prevalence of HBV infection in working children of Afghan immigrants in Sarasiab and Agh-Tappeh supporting centers as 0.6%, while no cases of HCV and HIV infections were observed. In another study in Tehran, Foroughi et al. (6) found that 4.5% of working children were HIV infected, 1.7% were infected with HBV, and 2.6% with HCV. Having drug-addicted parents, being infected with HCV, and having experience of trading sex significantly increased the rate of HIV infection among the street children of Tehran (6). Hadland et al. (10) studied the injection of opioid and the risk of HCV infection, in relation to the abuse of traditional drugs in the street youth of Canada in a prospective cohort. The results of this study showed that HCV seropositivity was 10.6% among the examined children (10). The study by Roy et al. (11) surveyed risk factors for HCV infection among street youths in the Montreal. Many of the subjects reported behaviors that put them at risk of BBIs: 45.8% injected drugs, 56.5% had at least one tattoo, and 78.3% had body piercing. In the latter study, the overall prevalence of HCV infection was 12.6% (11). In a study conducted by Fallah et al. (5) on 203 street children, six (3%) cases were positive for HBsAg, 54 (26.6%) cases for HBsAb, 16 (8%) cases for HBcAb, and seven (3.5%) cases for HCVAb. A meta-analysis estimated the prevalence of HCV infection among street children in Iran 2.4% (12). The differences in the results of the studies mentioned above may be due to the following reasons: differences in nationality (the studied population was Afghan) and differences in sampling locations. In the current study, infection with viruses was less frequent than the previous studies on the working children in Iran mainly due to the sampling in the population covered by the supporting centers with less involvement in high-risk behaviors, and better socioeconomic status as well.

It was estimated that 1.9% and 1.1% of Afghan general population were infected with HBV and HCV, respectively (13). However, the prevalence of HBV, HCV, and HIV was observed as high as 9.2%, 36.8%, and 5.9%, respectively in Afghan refugees residing in two camps in Pakistan (14). The prevalence of HBsAg was very high (60.8%) in Afghan refugees residing in a camp in Iran (15). It seems that the issue of BBIs is very concerning in refugees residing in camps; however, there is little known about the population of refugees living outside the camps including their children that mostly do not receive the regular healthcare services.

Copyright © 2019, Author(s). This is an open-access article distributed under the terms of the Creative Commons Attribution-NonCommercial 4.0 International License (http://creativecommons.org/licenses/by-nc/4.0/) which permits copy and redistribute the material just in noncommercial usages, provided the original work is properly cited.
download pdf 115.08 KB Get Permission (article level) Import into EndNote Import into BibTex
Number of Comments: 0