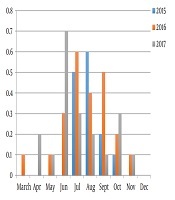 Toxocara Prevalence in Soil and Humans in Vladivostok: A Long-term Study

A total of 260 soil samples from sandpits and 155 samples from public parks were collected during July 2015 to December 2017. Soil samples were tested by sedimentation/flotation technique. Seroprevalence of Toxocara antibody in human was analyzed using Toxocara canis IgG ELISA assay.

Toxocara spp. are the geohelminths, unembryonated eggs are passed with feces of definitive host in environment and then infective third stage larvae within the eggshell development within three to six weeks under appropriate conditions such as warm temperature and high humidity. So, the soil contaminated Toxocara spp. eggs is a major source of infection for humans and animals. Moreover, high contamination rates of Tocoxara spp. eggs of sandpits lead to spreading of toxocariasis among children (3-6).

A long-term study was designed to assess the environmental contamination by Toxocara spp. eggs in soil collected from public parks and playground sandpits in Vladivostok. In addition, egg density of contaminated soil was calculated and percentage of infective third stage larvae was estimated. The Toxocara canis antibody prevalence in human sera was also investigated using ELISA assay.

Vladivostok is a capital of Far Eastern Region. It is situated on the coast of Sea of Japan, an area characterized by a monsoonal climate, with cold and snowy winters and warm and rainy summers. The average maximum and minimum temperatures over 2009 to 2014 were -23.9°C and 30°C respectively. Humidity levels for Vladivostok are 57% - 60% per year. Average amount of snowfall in the winter is 47 cm. The Vladivostok population is approximately 600,000.

Totally 260 soil samples from sandpits and 155 samples from public parks were collected during July 2015 to December 2017; samples were collected monthly excluding January and February due to a snow cover preventing the sample collection. Each sample contained approximately 200 gr soil. Each sample was taken from different depths: from the top 5 - 6 cm and from 10 to 15 cm below the surface.

Soil samples were analyzed using flotation sedimentation method. Soil samples 25 g each are mixed with water (1:2) in 50 mL centrifuge tubes, and centrifuged 1 200 rpm × 4 min. Then the sediment is centrifuged again with NaNO3 (1 L water per 1 kg NaNO3) added. Finally, the sediment was re-suspended in 50 mL saturated and poured into centrifuge tubes, which were filled to the brim, and the coverslip was superimposed. The samples were stored at the room temperature for 30 min, the coverslip was removed onto a microscopic slide and examined for the presence of parasite eggs.

The incidence of Toxocara canis in humans was analyzed using Toxocara IgG antibody ELISA assay. Analyzes were provided in hospitals of Vladivostok, where the human patients admitted for the general health check routine. The prevalence was estimated using Software “analysis of population morbidity” (the Center of Hygiene and Epidemiology of Sverdlovsk Region, Russia). Incidence rates of toxocariasis were expressed as cases per 100 000 person-years.

Correlation between Toxocara spp. prevalence in soil and the incidence in humans were obtained via Pearson correlation test. The bivariate logistic regression was used for analyze the factors influenced on the Toxocara spp. presence in sandpits, where the Toxocara infection was dependent valuable and month and access for animals were factor valuables. 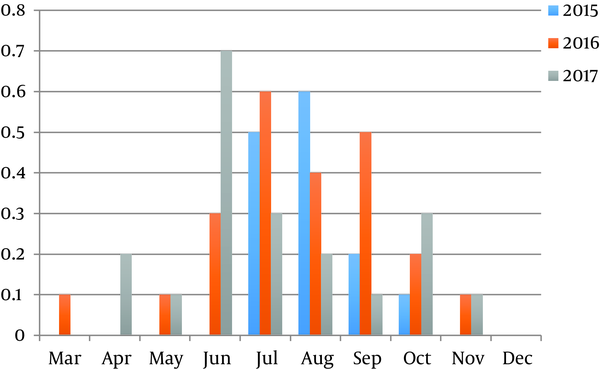 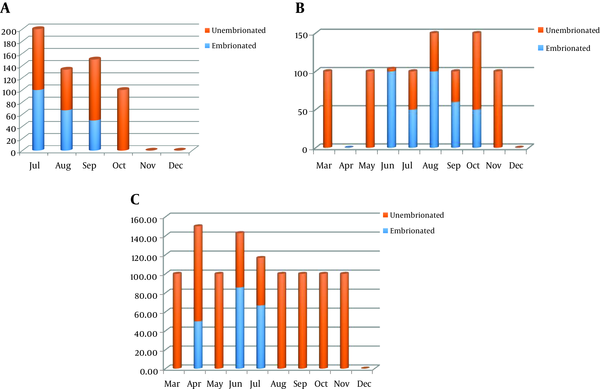 The highest prevalence was registered in summer season; the peak of the prevalence was recorded in August 2016 (100%). We have also never found Toxocara eggs in samples in December, however Toxocara spp. eggs were found in November and October.

Table 3. The Correlation Between Monthly Toxocara Prevalence in Humans and Soil Samples 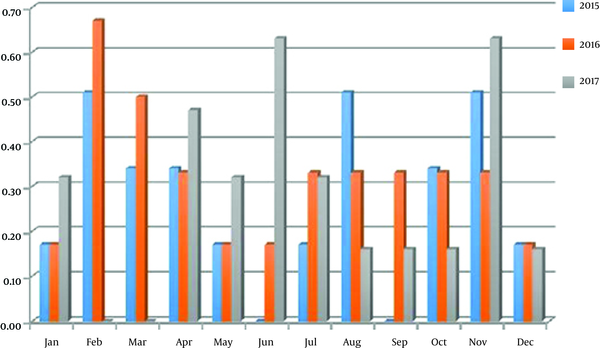 The results of present study indicated high environmental contamination of Toxocara spp. eggs, which lead to spreading of toxocariasis among humans (1).

Current study demonstrated, that the prevalence of Toxocara spp. embryonated eggs in sandboxes increased in summer season, and decreased in autumn. In Vladivostok totally three months such as July, August and September are the warmest months in the year (Table 4); the humidity is high and varies from 58% to 92% throughout the year. Relate to this both conditions including warm temperature and high humidity are necessary for third stage larva development and age survival. However Toxocara eggs are very resistant to harsh environment, rainfall and soil invertebrates such as slugs and earthworms can disperse eggs; eggs also are damaged at temperature as of 37°C (9, 10). We can speculate that snowfall can also disperse Toxocara eggs, so we have not found Toxocara eggs in December. By contrast, Kleine et al. found the higher percentage of Toxocara spp. contamination in February, similar results were also demonstrated in other studies from Europe (9, 11, 12). The cool and wet weather and high humidity in winter in Central Europe provides good condition for eggs survival and accumulation. In contrast, the significant season variation of Toxocara spp. contamination rates was not appeared in Northeastern Poland (12). The type of soil and meteorological factors can also influence on Toxocara spp. eggs survival and development (13).

We have no appeared the common tend for the season incidence of toxocariasis among humans. The stable incidence rates were appeared throughout the study period. The significant correlation appeared between Toxocara spp. contamination rates in sandboxes and parks and the Toxocara prevalence in humans suggests, that soil contaminated by Toxocara spp. eggs is a major source of spreading of human infection. However, our results are rube, because the tests were based on the detection of Toxocara canis IgG antibodies, which may persist many years after the infection. If proper hygiene measures are not implemented, environmental contamination can lead to infection (12).

The present study demonstrates season variation of Toxocara spp. eggs in soil samples. Warm temperature and high humidity in summer and autumn contributes to Toxocara eggs development. The limitation of our study is a method of Toxocara canis infection detection in human sera. The IgG titer may persist over the time, so the results of this parameter of rude. The PCR detection is method that is more sensitive, however it is rare provided in Russian hospitals.