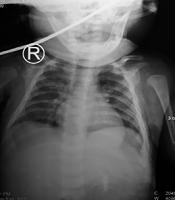 Cerebral Salt Wasting Due to Bacteremia Caused by Elizabethkingia meningoseptica: A Case Report

Elizabethkingia meningoseptica is a Gram-negative Bacillus associated with various nosocomial infections. These bacteria cause meningitis, sepsis, bacteremia, pneumonia, infections of the skin and soft tissue, ocular infections, sinusitis, epididymitis, and endocarditis. They can be opportunistic pathogens in newborns and immunocompromised patients.

The current study reported a case of bacteremia caused by E. meningoseptica in an infant presented with clinical presentations suggestive of necrotizing fasciitis with cerebral salt wasting and disseminated intravascular coagulation. Based on clinical diagnosis and preliminary blood culture report, the patient started receiving intravenous antibiotic (cefepime plus fludrocortisone) and fluid therapy for electrolyte imbalance. The patient also had fasciotomy and an amputation through the distal phalanges due to necrotizing fasciitis. The patient improved clinically after eight weeks of treatment.

E. meningoseptica bacteremia is commonly associated with complications; therefore, an appropriate and adequate antibiotic therapy, and also intensive care procedures and multidisciplinary interventions were crucial for the management of this case.

Elizabethkingia meningoseptica is a Gram-negative Bacillus widely spread in nature. Elizabethkingia meningoseptica was previously known as Chryseobacterium meningosepticum and Flavobacterium meningospeticum. These bacteria are widely found in soil, water, and hospitals. They are non-motile, non-fastidious, and non- glucose-fermenting bacteria. These bacteria were discovered in 1951 by an American bacteriologist named Elizabeth O. King (1).

E. meningoseptica is recognized as a rare, but serious cause of meningitis. The complications of meningitis that often appear are electrolyte imbalance. Hyponatremia is an electrolyte imbalance commonly observed in central nervous system (CNS) infections (2) mostly caused by two disorders namely syndrome of inappropriate antidiuretic hormone secretion (SIADH) and cerebral salt wasting (CSW); euvolemic hyponatremia occurs in SIADH and hypovolemic hyponatremia in CSW (3) To the best of the authors` knowledge, this is the first case of E. meningoseptica bacteremia complicated with possible meningoencephalitis, cerebral salt wasting, disseminated intravascular coagulation (DIC), and necrotizing fasciitis in an infant.

A three-month-old male infant weighing 5.9 kg was referred to the Emergency Department of a tertiary hospital with a 15 days history of fever associated with lethargy. The clinical examination on admission revealed poor clinical condition, irritable, arterial blood pressure 70/30 mmHg, respiratory rate 30 breath/minute, cardiac rate 130 beat/minute, and blood oxygen saturation 98%. He had a history of hospitalization in another center two weeks prior to this admision, at which he had a high fever and temperature reached 40°C followed by general seizure and decreased conciousness; thus, he was ventilated for five days in the intensive care unit. In terms of the infant’s social history, he was cared for in a childcare center at the hospital (different hospitals where he was admitted). The patient had normal growth and development with normal perinatal history and no underlying disease; a family history of similar condition was denied by the patient’s parents.

The patient also presented with a history of bruised arm and leg since two weeks prior to admission. Hard edema with violet skin color and blistered lesions containing liquid with a fetid odor and bloody regions were observed over the upper and lower limbs (Figure 1). Necrosis of the distal phalanges of 2nd to 5th digits (right hand) was observed (Figure 2). He was treated with surgical debridement, wound care, and antibiotic therapy in previous admission. He received the diagnosis of necrotizing fasciitis followed by debridement, fasciotomy, and an amputation through the proximal phalanx in the hospital. Postoperatively, the patient obtained a good functional result. A supine chest X-ray demonstrated an infiltration of both lung fields (Figure 3). Clinical suspicion of sepsis with meningoencephalitis was confirmed by the findings of cranial computed tomography (CT) scan with meningeal enhancement, blood culture, and clinical condition. At this point, lumbal puncture was recommended for diagnostic and therapeutic purpose, but parents refused consent for lumbal puncture on their child due to their anxiety. Empirical antibiotic therapy with meropenem was started while awaiting sepsis screening test results. The chest X-ray showed an infiltration of both lung fields, suggestive of pneumonia

A strain of Elizabethkingia meningoseptica was isolated from the blood culture of patient by a VITEK 2 system (Biomerieux). In vitro antimicrobial susceptibility testing indicated that the isolate was sensitive to cefepime, tigecycline, trimethoprim-sulfamethoxazol, and intermediate to piperacillin-tazobactam, but resistant to ampicillin, ampicillin-sulbactam, cefazolin, ceftazidime, aztreonam, meropenem, amikacin, and gentamicin. Based on the results of this test, the intravenous antibiotic was switched to cefepime 50 mg/kg body weight/day for three weeks.

E. meningoseptica infection has a high mortality rate particularly in immunocompromised neonates and infants. The prevalence of infection caused by these bacteria is still unknown, but it most likely spreads through the water environment, mechanical ventilation, and some medical devices in hospitals. The infection can also be spread through drinking water, water remain in the washer tub, water disinfectants, saline solutions used for flushing procedures, hand of hospital staff, infant formulas, and some medical equipment (1). In the current case, the patient was cared for in a child care center at the hospital before getting sick. E. meningoseptica could be transmitted by child care worker during handwashing with water contaminated with the bacteria or using tap water sources to make infant’s formula, which can be the risk factors for the spread of E. meningoseptica infection in the reporting case.

E. meningoseptica are multi-drug resistant bacteria. They are typically resistant to beta-lactams (7). It is difficult to decide on appropriate choice of antibiotic agents to treat E. meningoseptica infection, since antimicrobial guidelines remain to be established (8). A study found that all patients with bacteremia caused by E. meningoseptica had received combination antibiotic therapy with two agents including cotrimoxazole, rifampicin, piperacillin-tazobactam, tigecycline, or cefepime-tazobactam; according to in vitro antimicrobial susceptibility test results, all the isolates were resistant to ciprofloxacin, six isolates were sensitive to tigecycline, and 10 were susceptible to piperacillin-tazobactam and cotrimoxazole. Mean duration of therapy in this study was 10 days (5). Based on the current study results, a strain of E. meningoseptica was isolated from blood culture test of the studied patient and its susceptibility was tested against 12 antibiotics and accordingly, various responses were obtained. The isolate was sensitive to cefepime, tigecycline, trimethoprim-sulfamethoxazol, and intermediate to piperacillin-tazobactam. However, combination antibiotic therapy with cefepime-tazobactam was decided for the management of infection, but due to limited availability of an agent in the hospital (tazobactam was not available), the patient received cefepime via intravenous infusion, to which the isolate was susceptible. The bacteremia caused by E. meningoseptica was successfully treated in the reporting case with a three-week administration of cefepime. His condition gradually stabilized and the microbiological follow-up of the patient did not show E. meningoseptica.

One of clinical characterictics of bacteremia caused by E. meningoseptica in neonates is high fever followed by other symptoms such as irritability, lack of appetite, hypertonia, and concomitant septic shock in 25% of cases (9). Meningitis is more common in premature babies and newborns (10). In addition to the involvement of soft tissue, high fever, seizure, and decreased conciousness were other manifestation of the reporting patient, which supports the diagnosis of meningocephalitis. Systemic inflammation as a result of severe infection leads to the activation of coagulation; e g, disseminated intravascular coagulation (DIC) (11). On the third day of treatment, with the above clinical and laboratory findings, patient was diagnosed with septic shock and DIC. Sepsis is almost associated with hemostatic abnormalities such as systemic activation of coagulation with massive thrombin and fibrin formation and subsequent consumption of platelets and proteins of haemostatic system (DIC). DIC is diagnosed with an elevated PT, APTT, low platelet, and elevated d-dimer levels. However, PT and APTT are not always elevated. PT is prolonged in 50% - 75% of patients with DIC, and in 25% - 50%, it is normal or shortened (12). DIC is associated with infections caused by Gram-negative bacteria, but it can even occur in sepsis caused by Gram-positive bacteria (13).

Therapy for CSW should be administered under two conditions: increasing blood sodium level to safe level and replacing sodium and fluid loss. Sodium replacement should be performed slowly to prevent central pontine myelinolysis, which is a neurological disorder most frequently occurs after too rapid medical correction of hyponatremia (17). In the current case, patient had polyuria, dehydration, and hyponatremia. Patient received fluid resuscitation and active correction of hyponatremia using hypertonic saline. In addition, patient also received fludrocortisone therapy. Fludrocortisone is a mineralcorticoid that increases reabsorption of sodium and loss of pottasium by the renal distal tubules (18). A study reported a case series of fludrocortisone therapy for CSW in a pediatric population; results indicated that fludrocortisone may offer a rapid and effective treatment that targets the major natriuretic peptides site of action known to be associated with CSW (19). Patients with CSW have a decrease in aldosterone level. Therefore, fludrocortisone is quite effective in replacing aldosterone hormonesynthesized from corticosteroid and has a moderate potential of glucocorticoids and a large potential of mineralcorticoids. Adequate therapies such as control of infections using antibiotics, correction of electrolyte balance disorders, rehydration, and fludrocortisone therapy decreased urine production, which gradually led to the improvement of hyponatremia and dehydration. The patient also might need further examinations for immune system disorders since E. meningoseptica is recognized as an emerging pathogen that cause serious infections in newborns and immunocompromised patients.

- E. meningoseptica is an emerging infection and nosocomial threat with high-risk complications and mortality in neonates and infants; therefore, intensive care procedures and multidisciplinary interventions are crucial for case management.

- E. meningoseptica should be considered as a cause of sepsis and meningitis in infants and the treatment of choice should be determined according to the results of antibiotic susceptibility test; thus, improving the accuracy of bacterial identification and antibiotic susceptibility tests are essensial for early diagnosis and etiological treatment.

- CSW is generally induced by infection or surgery. Water and salt replacement is the primary management for this condition. Fludrocortisone can be considered as an appropriate alternative treatment in cases of CSW.

Copyright © 2019, Author(s). This is an open-access article distributed under the terms of the Creative Commons Attribution-NonCommercial 4.0 International License (http://creativecommons.org/licenses/by-nc/4.0/) which permits copy and redistribute the material just in noncommercial usages, provided the original work is properly cited.
download pdf 3.38 MB Get Permission (article level) Import into EndNote Import into BibTex
Number of Comments: 0