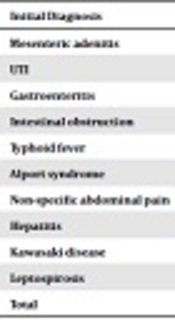 Appendicitis is the inflammation of the appendix. In spite of advances in the diagnosis and management of acute appendicitis, its morbidity is still significant. Despite widespread use of ultrasonography, computed tomography (CT) scan, and laparoscopy to diagnose appendicitis, the rate of misdiagnosis is not diminished accordingly.

The current study aimed at determining the prevalence of primary misdiagnosis in pediatric patients presenting with appendicitis to Aliasghar Hospital, a tertiary referral center in Tehran, Iran from 2005 to 2015.

Closer attention to signs and symptoms of acute appendicitis and higher clinical suspicion could reduce the rate of misdiagnosis and therefore minimize complications.

Delayed diagnosis of acute appendicitis can result in significant morbidity and mortality. The current study aimed at determining the prevalence of primary misdiagnosis in pediatric appendicitis. The study also aimed at describing the correlation between the primary misdiagnosis with its consequences including an increased rate of perforation, postoperative complications, need to postoperative interventions, and prolonged hospital stay.

Appendicitis is the inflammation of the appendix, which is a small finger-like appendage branching from the colon. Nowadays, advanced surgical techniques and available antibiotics significantly reduce its mortality and morbidity (1). In spite of advances in diagnosis and management of acute appendicitis, its morbidity is still significant. However, hopefully, the mortality is low (2). In most children with appendicitis, a combination of history, physical examination, and laboratory findings should provide sufficient information to make a diagnosis. However, misdiagnosis also led to 10% - 30% of incorrect appendectomy cases (3). Alvarado scoring system in acute appendicitis (including localized tenderness in the right lower quadrant of the abdomen (2 points), pain migration (1 point), leukocytosis (2 points), shift to left of the neutrophils (1 point), fever (1 point), nausea (1 point), vomiting (1 point), loss of appetite (1 point), and peritoneal (to be deleted) irritation (4)) is considered useful to enhance the diagnosis of appendicitis. Obtaining a score below 3 reduces the possibility of acute appendicitis, while a score of 4-6 requires further imaging, and a score ≥ 7 depicts a high likelihood of acute appendicitis, requiring surgical measures (4).

In children with equivocal clinical findings for appendicitis, the combination of pelvic ultrasound followed by limited CT with rectal contrast, should be considered (2, 5).

Despite widespread use of ultrasonography, computed tomography (CT) scan, and laparoscopy to diagnose appendicitis, the rate of misdiagnosis is not diminished accordingly (15.3%). Misdiagnosis rate is reported higher in female patients than males (22% vs. 9%) (6). It is recommended that ultrasound be used to evaluate patients with acute appendicitis, with a sensitivity of more than 85% and specificity of more than 90%. Compression ultrasonography is an accurate method to diagnose appendicitis. Although sensitivity is not as good in children, it is a relatively inexpensive and quick measure to diagnose appendicitis. However, routine ultrasound examination does not, in comparison with clinical evaluation, increase diagnostic accuracy, and does not reduce the rate of negative appendectomy or perforation (7).

Certain conditions can mimic appendicitis including gastroenteritis, mesenteric adenitis, diverticulitis, pancreatitis, urinary tract infections (UTIs), pneumonia, cholecystitis, and in female patients, torsion of ovaries, ectopic pregnancy, and pelvic inflammatory disease. The main treatment for appendicitis is surgical intervention and appendectomy (7). On the other hand, different locations for appendix are reported in different studies including retrocaecal, pelvic, paracaecal, subcaecal, preileal, postileal, lateral pouch, etc., which might lead to primary misdiagnosis in some cases (8).

As appendicitis can be lethal if not treated, surgical exploration is recommended whenever there is clinical suspicion to the presence of acute appendicitis. However, misdiagnosis or missed diagnosis of appendicitis could be an undesirable result with unnecessary surgical interventions. To reduce the rate of unnecessary surgical interventions, laparoscopy and imaging studies such as CT scan and ultrasound examinations are recommended in cases where the clinical signs are vague (7, 9).

The current study was designed to determine the prevalence of primary misdiagnosis in pediatric patients presenting with appendicitis to Aliasghar Hospital, a tertiary referral center in Tehran, Iran from 2005 to 2015.

The current retrospective observational case series was conducted in Aliasghar Pediatric Hospital from 2005 to 2015. Initially, all the files with a final surgical diagnosis of acute appendicitis from hospital archives were extracted. All the files were thoroughly studied for primary diagnosis, delayed diagnosis, and primary misdiagnosis. Primary diagnosis of acute appendicitis was made clinically (based on the Alvarado score), along with necessary imaging modalities when needed. Relevant data were extracted using checklists that included demographics, primary signs and symptoms, laboratory findings, final diagnosis, pathology report, and operation report. Patients undergoing diagnostic measures in the center, but not continuing the treatment plan in the center were excluded from the study.

In the current study, 229 pediatric patients undergoing appendectomy were investigated. The age range was 1 to 17 years with the mean of 8 ± 3. Of this population, there were 127 males (55.5%) and 102 females (44.5%). Surgical intervention was performed on 229 cases, of which 212 (92.6%) had a correct primary diagnosis in the center, whereas 17 cases (7.4%) were initially misdiagnosed, but eventually underwent surgical treatment.

Table 1 shows the number of correct initial diagnoses, with the non-complicated acute appendicitis as the highest (78.77%), followed by peritonitis (3.31%), and perforated appendicitis (15.08%).

Table 2 shows the number of initial misdiagnoses, with mesenteric adenitis as the most common diagnosis (23.52%), followed by UTI, gastroenteritis, intestinal obstruction, and typhoid fever (11.77% each), and the Alport syndrome, the Kawasaki disease, leptospirosis, hepatitis, and non-specific abdominal pain (each 5.88%).

Table 2. Primary Diagnoses in Patients with an Initial Misdiagnosis

The mean age of children with correct initial diagnoses was 8 ± 3 years, and that of initial misdiagnoses was 7 ± 4 years, with no significant difference (P = 0.409). Of those with correct initial diagnoses, 54.7% were males and 45.3% females, whereas the ones with initial misdiagnoses were 64.7% males and 35.3% females; not statistically significant, either (P = 0.460).

Final diagnosis of patients with initial misdiagnosis included gangrenous and perforated appendicitis in 12 cases (70.59%), non-complicated acute appendicitis in four cases (23.53%), and phlegmon in only one case (5.88%).

Table 3. Histopathology of Patients with an Initial Misdiagnosis

During the initial physical examination, guarding was not present in any, but there was right lower quadrant tenderness in 10 patients (58.8%), generalized tenderness in six patients (35.3%), and hypogastric tenderness in one patient (5.9%). Rebound tenderness was detected in 35.3% of the patients. Urinalysis was performed in 17 patients; the results were normal in 10 patients, whereas pyuria was present in four, and WBC (greater than 5/HPE), RBC (greater than 5/HPE), and bacteria in culture specimens of urine in three patients. In 13 patients, there was a leukocytosis of over 10,000/μL, in 11 of which there was a shift to the left. Average erythrocyte sedimentation rate was 44 mm/hour, and average C-reactive protein was 46.94 mg/L in the patients. In 13 cases, patients had already received antibiotics. Diagnostic methods in the 17 patients included laparotomy (70%), abdominal CT scan (11.8%), ultrasonography (11.8%), and laparoscopy (5.9%). Ultrasonography was diagnostically useful in only four cases. Appendix location was retrocecal in nine cases (52.9%), retroileal in five (29.4%), and pelvic in three (17.6%). Only two patients underwent CT scan. CT scan findings included an inflamed appendix with a diameter > 5 mm and fat stranding around the appendix for both cases.

Among the current study subjects, 178 cases (77.7%) underwent appendectomy with the diagnosis of acute or complicated appendicitis, which was due to a delay in patients’ referral to the center. Nonetheless, 34 patients (14.9%) were treated in other centers with the incorrect initial diagnosis and needed to be managed instantly for the complications of acute appendicitis.

There was only one dead case; an 11-year-old female patient treated for gastroenteritis in other centers, presented to the studied center with peritonitis (secondary to perforated appendicitis) and consequent septic shock.

In the current study, the rate of acute appendicitis misdiagnosis was investigated in a tertiary pediatric center. About one-third of the patients with appendicitis were less than 18 years of age, with the peak prevalence of 11 to 12 (10, 11). Acute appendicitis usually presents with classic symptoms of anorexia, nausea and vomiting, and abdominal pain shifting to right side. Delayed diagnosis, especially in a pediatric setting, might lead to perforated appendicitis, with a significant morbidity. Younger children, due to their inability to provide a detailed history, do not describe the red flags; therefore, clinicians are not sufficiently warned to consider appendicitis, which leads to a higher rate of misdiagnosis. Thus, such patients are more likely to present with complicated appendicitis (12).

One of the factors that could raise awareness and increase clinical suspicion to acute appendicitis is considering clinical presentations in cases with initial misdiagnosis. In the present study, anorexia, fever, and nausea and vomiting were present in the majority of patients. However, classic signs of abdominal pain with radiation and shifting to the right lower quadrant of the abdomen are sometimes less common; review of the presented signs and symptoms showed that patients with initial misdiagnosis presented no classic signs of acute appendicitis.

On the other hand, Karabulut et al., showed that most patients with negative appendectomy presented with abdominal pain, nausea, and fever (13). Nonetheless, rare presentations such as diarrhea or vaginal discharge were the other presentations that could distract clinicians from correct diagnosis (14, 15).

The average interval between referring to the center with initial misdiagnosis until final diagnosis was 79 hours, which was significantly higher than the time reported by Naiditch et al. (28.3 hours), and this indicated that the studied center should pay close attention and higher clinical suspicion of acute appendicitis along with other differential diagnoses (7).

In the present study, despite the availability of various diagnostic methods, the majority of patients with initial misdiagnosis (70%) finally underwent laparotomy for acute appendicitis. Ultrasound examination was useful in only 23% of such cases, which could be due to insufficient experience of the ultrasound examiner.

Another point of possible interest was the location of the appendix. In 53% of patients with initial misdiagnosis, the appendix was reported to be retro-cecal. Location of appendicitis in patients with initial misdiagnosis was 53% (n = 9) retro-cecal, 29% (n = 5) retro-ileal, and 18% (n = 3) pelvic. To prevent high incidence of misdiagnosis, the current study findings depicted the importance of surgical consultation in cases of suspected acute appendicitis or manifested with abdominal pain, since the first visiting physicians are usually either pediatricians or emergency medicine specialists.

With classic signs and symptoms, diagnosis of appendicitis is quite likely to be correct. However, despite numerous diagnostic advances, initial misdiagnosis rate in the studied center was 7.4%. Delayed diagnosis directly correlates with the increased rate of complications such as perforated appendicitis. Therefore, paying closer attention to signs and symptoms of acute appendicitis and higher clinical suspicion could reduce the rate of misdiagnosis and, therefore, minimize complications. In the meantime, a surgery consultation in cases of abdominal pain in emergency room might reduce the initial misdiagnosis; in the current study all misdiagnosed patients were visited by pediatricians or emergency medicine specialists at first.

Copyright © 2019, Author(s). This is an open-access article distributed under the terms of the Creative Commons Attribution-NonCommercial 4.0 International License (http://creativecommons.org/licenses/by-nc/4.0/) which permits copy and redistribute the material just in noncommercial usages, provided the original work is properly cited.
download pdf 110.21 KB Get Permission (article level) Import into EndNote Import into BibTex
Number of Comments: 0