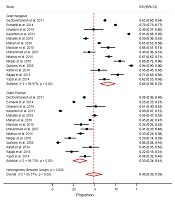 Sepsis is one of the most common causes of neonatal mortality, especially in developing countries. The purpose of this study was to systematically review the bacterial causative agents of neonatal sepsis and their antibiotic susceptibility in Iran.

We searched all previously published papers to gather related information on Iranian neonatal sepsis in international and national databases (in both Persian and English) from 2006 to 2018. The standard STROBE checklist was used for quality assessment. The data were analyzed by statistical methods with a random-effects model using Stata 14 software.

A total of 89,472 neonates with sepsis (presented in 17 studies) were included in this systematic review. The mortality rate of neonates was 28.0%. The proportions of neonatal sepsis caused by Gram-negative and Gram-positive bacteria were 66.0% and 33.0%, respectively. The most common bacteria causing neonatal sepsis were Klebsiella pneumoniae and Pseudomonas aeruginosa (Gram-negative) and coagulase-negative staphylococci and Staphylococcus aureus (Gram-positive).

Sepsis is a systemic inflammatory response to infection in which microorganisms entering the bloodstream cause severe symptoms such as fever and shock (1). This disease is one of the most important causes of neonatal mortality, especially in premature newborns (2, 3). The prevalence of this disease is one to eight per 1000 newborns in developed countries (4), while this rate is quite higher in poor and developing countries. Therefore, sepsis is still among the most common causes of newborn death in developing countries (5).

Sepsis in younger than four-week-old newborns is diagnosed by clinical signs and positive bacterial blood culture. There are two types of sepsis based on the age of newborns when the symptoms appear, including early-onset sepsis and late-onset sepsis. Early-onset septicemia occurs shortly after birth by the organisms found in the maternal birth canal. Late-onset sepsis occurs 48 hours after the birth of neonates with the progression of clinical signs. The peak incidence for late-onset sepsis is usually around a week after birth, and it is usually caused by newborns’ exposure to environmental microorganisms (4). In various studies in Iran, the incidence rate of sepsis has been reported from 16.6 to 24.65% (6).

Bacteria are of the most important causes of neonatal sepsis. Many studies have shown group B Streptococci, coagulase-negative staphylococci (CoNS), Staphylococcus aureus, Escherichia coli, Klebsiella, Enterobacter, Pseudomonas aeruginosa, and Enterococci as the most common bacterial agents causing neonatal sepsis (7-10). Several factors in the prenatal and postnatal periods can be involved in neonatal sepsis, such as the type of delivery, preterm birth, premature rupture of the fetal membrane, uterine inertia, and maternal infection. Furthermore, sepsis is more likely to occur in premature, low-birth-weight, and male neonates (11).

The common signs and symptoms of sepsis in newborns are usually non-specific. A delay in the treatment of neonatal sepsis is mostly associated with a higher mortality rate. Therefore, antibiotic therapy should quickly begin for newborns before reporting laboratory results. Given a variety of microorganisms causing neonatal sepsis in different regions, choosing appropriate antibiotics for empirical therapy depends on the epidemiological information of common circulating organisms and their susceptibility patterns in each area (12). Although there are few studies on bacterial agents causing sepsis in neonates in different parts of Iran, currently, there is no comprehensive investigation or systematic review on this topic. Therefore, the purpose of this study was to systematically review the bacterial agents causing neonatal sepsis and their antibiotic susceptibility in Iran.

The present study was carried out by reviewing articles on neonatal bacterial sepsis in Neonatal Intensive Care units (NICUs) in Iran from 2006 to 2018. We searched several English keywords and their Persian equivalent including “neonatal septicemia”, “neonatal sepsis”, “antibiotic resistance in neonatal sepsis”, “neonatal blood infections”, and “bacterial agents of neonatal sepsis” in the title and abstract of published articles in various databases, including MEDLINE, EMBASE, Scopus, ISI, Google Scholar, MD Consult, BMJ Journals, Cochrane Library, Directory of Open Access Journals (DOAJ), BioMed Central, OvidSP, Oxford Journals, ProQuest, Ebscohost, and Emerald Journals, as well as Iranian databases such as SID, IranDoc, Iranmedex, Scimed, and RICeST. All published papers from 2006 to 2018 indexed in these databases were reviewed. To restrict the results to Iran, all the aforementioned keywords were applied with “AND Iran”.

After creating a list of titles and abstracts of retrieved studies, the standard STROBE checklist was used to determine the quality of the studies. The STROBE checklist consists of 22 different sections that evaluate the various aspects of the methodology, including sampling method, statistical analysis, adjustment of confounders, measuring variables, the validity and reliability of tools, and the objectives of the study. In this study, an inclusion criterion was having a score of at least 15 on the 22 sections of the STROBE checklist. Accordingly, 88 articles were selected out of 280 primary retrieved articles. After the comprehensive examination of the articles, 17 articles were selected that were the most relevant studies to our objectives (Figure 1). The quality of the articles was checked by two researchers (AA and RCH) independently. 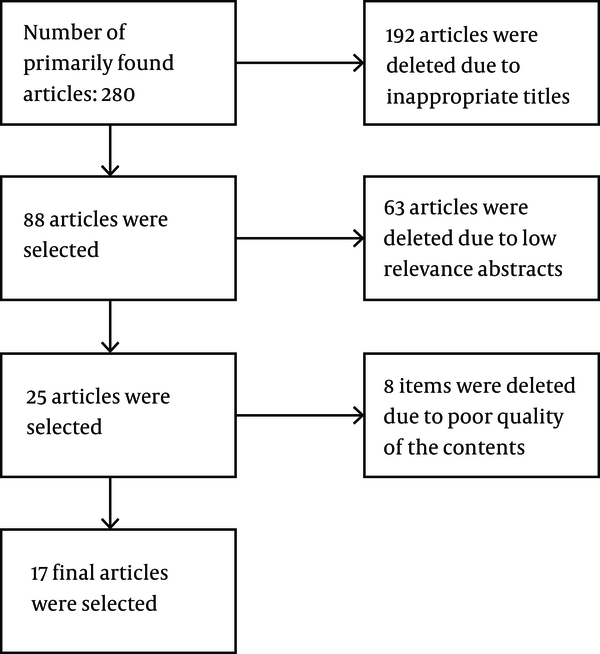 The flowchart of the selection steps of articles

Other inclusion criteria included studies that (1) were done on an Iranian population; (2) were performed during the last 12 years (2006 - 2018); (3) included bacterial agents causing neonatal sepsis; (4) conducted antibiotic susceptibility testing of bacterial isolates; and (5) measured the antibiotic resistance level by a standard method. The exclusion criteria included studies that (1) were available only in the abstract; (2) were review articles; (3) were Persian-language articles if their English language versions were also available (i.e., only the English version of articles were used); (4) were case studies; and (5) determined bacterial agents without antibiotic susceptibility testing.

The data for bacterial causative agents of sepsis and their antibiotic susceptibility were extracted from all neonatal cases of each study. Subsequently, the frequency of associated parameters of all studies was also was used to better estimate these criteria. Thus, the percentage of bacterial agents in 17 studies was calculated as an average number. Furthermore, the antibiotic susceptibility results of bacteria were extracted from studies, and the sensitivity of each bacterium to each antibiotic was determined and expressed as the mean ± standard deviation.

The characteristics of each study were recorded for data analysis, including the authors’ names, publication year, study location, patient numbers and gender, neonatal weight and age, type of delivery, the mortality rate of newborns, bacterial agents, and antibiotic resistance rates. All data were presented in tables or figures. The heterogeneity among studies was checked using the chi-square test and quantified using the I2 index. All analyses were done using a random-effects model with a 95% confidence interval by Stata 14 statistical software (Stata Corp., College Station, TX, USA). Finally, the data were interpreted by considering the results of other studies from several countries. 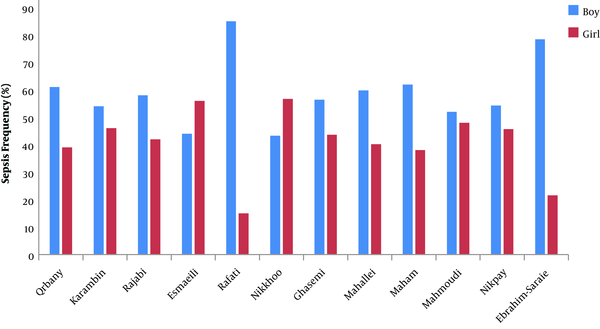 The frequency of sepsis based on patient gender 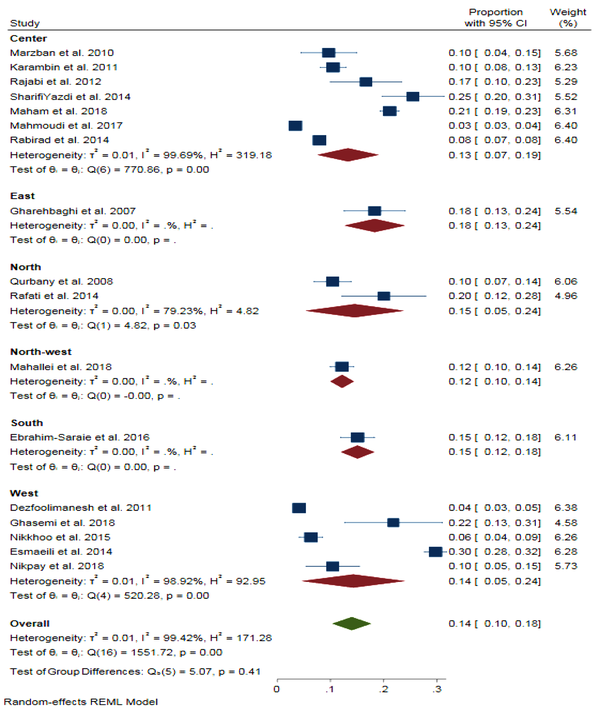 The pooled proportion of neonatal sepsis in Iran 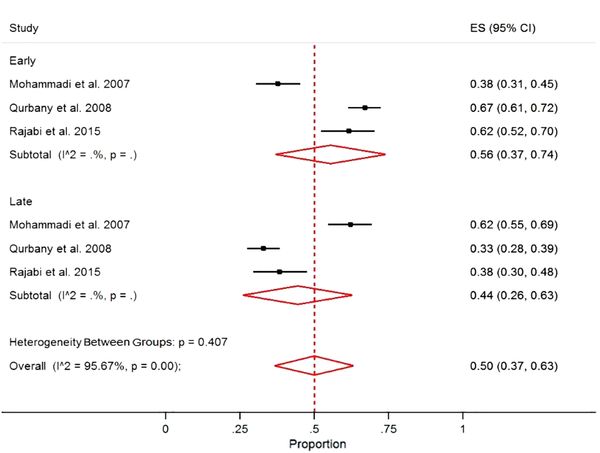 The pooled proportion of early and late neonatal sepsis in Iran

Klebsiella pneumoniae (24.2 ± 29.33%) and Pseudomonas aeruginosa (16.6 ± 11.91%) were the most common Gram-negative bacteria causing neonatal sepsis in Iran. On the other hand, coagulase-negative staphylococci (15.17 ± 19.6%) and Staphylococcus aureus (8.41 ± 10.51%) were the most common Gram-positive bacteria isolated from neonatal sepsis in Iran (Figure 5). The overall antibiotic susceptibility results of Gram-negative and Gram-positive bacteria are presented in Tables 2 and 3, respectively.

The frequency of bacteria causing neonatal sepsis in Iranian neonates. The numbers above each bar show the frequency percentage of each bacterium. 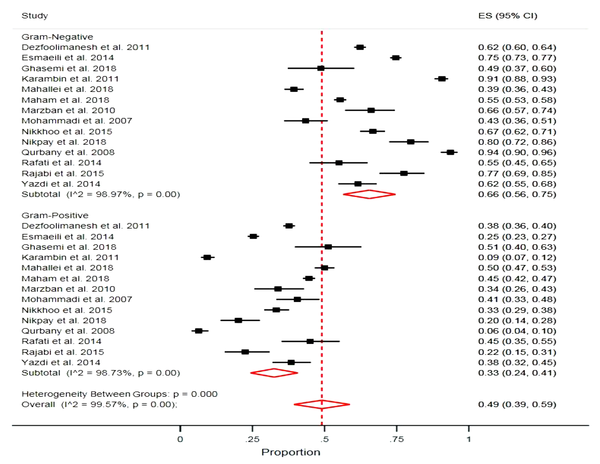 Sepsis is one of the most serious infectious diseases of neonates (1). Due to the small number of studies and lack of their proper distribution in the geographical areas of Iran, it is not conceivable to compare the rates of neonatal sepsis in different regions of the country. In a review of eight studies on neonatal sepsis from India, USA, Thailand, South Korea, Myanmar, and Guatemala, the lowest prevalence was in the USA with 450 cases in 100,000 births while the highest prevalence was in India with 17,000 cases in 100,000 births. Furthermore, the overall prevalence of neonatal sepsis was reported as 2,202 cases in 100,000 births in seven countries (28). The reason for the difference in the sepsis prevalence in various parts of the world may be the factors such as socioeconomic status, quality of health care, climatic conditions, race, the level of technology, and medical knowledge (29).

Studies in different parts of the world suggest that male neonates are more susceptible to bacterial sepsis than females so that the risk of sepsis is twofold higher in males (29-31), which is consistent with our results. This sex-dependent vulnerability is probably related to sex-linked factors in male neonates (29, 30). Given the relationship between sepsis frequency and neonatal weight, in our study, neonates with less than 2 kg weight showed a higher rate of sepsis, suggesting that low-birth-weight is an important factor in the development of sepsis, which is consistent with the literature review (31). Moreover, similar to the previous research (9), the majority of sepsis cases in our study were early-onset sepsis, indicating the importance of maternal factors and maternal health status in neonatal sepsis.

Our results indicated that the most common Gram-negative bacterial isolates (K. pneumoniae and Pseudomonas aeruginosa) were mostly susceptible to imipenem, suggesting this antibiotic as a good choice for empirical therapy. This is supported by the results of another study from Iran (7). The most common Gram-positive bacteria of neonatal sepsis were susceptible to vancomycin, which is consistent with the results of other studies (36, 37).

Here, we should declare some limitations to our study. We lacked relevant information to assess the relationship between neonatal weight, age, gender, and the type of childbirth and mortality rates for sepsis in several articles used in this study. Further, it is notable that all studies had used the disc diffusion method for evaluating the antibiotic susceptibility of bacteria, which is not appropriate for some types of antibiotics against particular bacteria. Some fastidious bacteria, which are among the common agents of neonatal sepsis such as Streptococcus, were not isolated in the selected studies. the survivors of a sepsis episode may be readmitted to the hospital again for sepsis (38). Here, no or little information was found on the repeated sepsis episodes in the included articles. Therefore, we did not consider this information for analysis in this study, which may produce bias as a limitation of this study.

The prevalence of sepsis is still high in NICUs and neonatal wards of hospitals in Iran. Low-birth-weight and male gender are among the risk factors of neonatal sepsis in Iran. Gram-negative bacteria, including K. pneumonia and P. aeruginosa, are the most common bacterial agents of neonatal sepsis with good susceptibility to imipenem. Coagulase-negative staphylococci and S. aureus are common Gram-positive bacteria and vancomycin is the most effective drug for them. It seems that further studies of neonatal sepsis are required to more accurately determine maternal and neonatal risk factors and bacterial agents with their susceptibility to available antibiotics.

The authors would like to thank the Kermanshah University of Medical Sciences for providing facilities for this work.