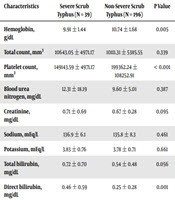 Scrub typhus, a zoonosis caused by bacteria Orientia tsutsugamushi is associated with varying clinical features and significant mortality due to complication in view of ineffective treatment.

This study was undertaken to identify the factors for predicting severity in scrub typhus.

This retrospective study was conducted at a tertiary care teaching hospital between January 2015 to October 2016. All children younger than 18 years of age admitted with a history of fever for more than seven days and positive IgM ELISA for scrub typhus were included in the study. Cases of “severe scrub typhus” were identified based on criteria from published pediatric studies. A total of 235 patients tested positive for scrub typhus, out of which 39 patients were in the severe scrub group and 196 in the non-severe group. Reports were analyzed for the predictors of severity of scrub typhus in both groups.

We conclude that altered sensorium, anemia, thrombocytopenia, elevated transaminases, hypoalbuminemia, and prolongation of prothrombin time to be predictors of severity of illness in scrub typhus.

Scrub typhus is a common bacterial zoonosis caused by a Gram-negative bacterium known as Orientia tsutsugamushi. This infection is transmitted to humans from the bite of a trombiculid mite (1). It was originally found in the Himalayan foothills and Southeast Asia, whereas it has now spread to different parts of India, with higher incidence rates reported in southern and northeastern regions of the country. The tsutsugamushi triangle, which comprises of Southeast Asia, Asian Pacific Rim, and Northern Australia, accounts for the largest burden of the disease (1, 2). Although it was considered to be a rare disease for decades and practically obsolete after the Second World War (3), there has been a clear re-emergence of the disease in many parts of India and Burma.

The clinical manifestations of scrub typhus are attributed to acute vasculopathy that ensues when the organism attaches to and penetrates into phagocytes and endothelial cells by a specific 56-KDA protein. Fever, headache, drowsiness, conjunctival suffusion, lymphadenopathy, and hepatosplenomegaly are the common clinical manifestations of scrub typhus. A characteristic eschar can be seen at variable rates (10% - 92%) at the site of the chigger bite (4). Severe complications include septic shock, acute kidney injury, meningoencephalitis, myocarditis, disseminated intravascular coagulation (DIC), and multi-organ dysfunction syndrome, which may occur in a variable number of patients.

It is known that diagnostic tests for scrub typhus, such as Weil-Felix test, lack sensitivity and specificity. In India, the current serological diagnostic test continues to be immunoglobulin M enzyme-linked immunosorbent assay (IgM ELISA), as the gold standard immunofluorescence antibody (IFA) kit is not readily available in the country. Although the majority of previous studies have emphasized on the clinical aspects of this disease, there are insufficient studies on markers of its severity (5). Therefore, it is important to study the markers of disease severity, which can predict the clinical course and complications and facilitate early treatment.

In this retrospective study, we aimed to present a detailed clinical profile of scrub typhus and identify the predictors of its severity.

Scrub typhus was diagnosed based on major clinical symptoms including acute fever and at least one of the minor symptoms, such as myalgia, headache, conjunctival injection, cough, profuse sweating, maculopapular rash, lymphadenopathy, eschar, and positive IgM ELISA results (6). The exclusion criteria in this study were as follows: children using long-term medications, immunodeficiency, and have a chronic disease. Severity of the disease was defined based on previously published adult and pediatric studies (7-13). The study population was divided into two groups in terms of disease severity: (1) non-severe, patients without any complications and (2) severe, patients with severe complications. Out of 235 patients who tested positive for scrub typhus, 39 were classified in the severe group and 196 in the non-severe group.

Severe scrub typhus was diagnosed in patients with a clinical image of organ dysfunction (Table 1).

Categorical data are expressed as frequency. Differences between the two groups were analyzed using chi-square test. Multivariate logistic regression analysis and chi-square test were performed to determine the associations between variables and severity of disease for predicting the severity of scrub typhus. The final data are presented as unadjusted odds ratio (OR) at 95% confidence interval (CI). P value less than 0.05 was considered statistically significant. Statistical analyses were performed in SPSS version 23.0 (SPSS Inc., Chicago, Ill., USA).

A total of 235 patients were included in this study. The study population was divided into two groups of severe and non-severe scrub typhus, based on the defined criteria. Clinical parameters were compared between the two groups (Table 2). According to multivariate regression analysis, some parameters were found to be strong predictors of the severity of the disease.

Approximately 20% of children with scrub typhus below 10 years of age developed the severe form of the disease versus 12% of children in the age group of 10 - 18 years. Younger patients seem to be more susceptible to severe scrub typhus, compared to older children, as they are actively involved in recreational activities, associated with higher outdoor exposure.

The findings showed that more than 50% of patients in the severe scrub typhus group required PICU stay versus 10.2% of patients in the non-severe group. The most common reasons for PICU stay were hemodynamic instability and organ dysfunction. Only 20% of the patients developed eschar, and the difference between the two groups was not significant. Gastrointestinal (GI) involvement was reported in 23.1% of children with severe scrub typhus versus only 8.7% in the non-severe group, presenting with diarrhea.

Based on the findings, there was no significant difference between the two groups with regard to clinical parameters, such as sex, jaundice, cough, myalgia, dyspnea, oliguria, vomiting, hepatomegaly, splenomegaly, abdominal pain, headache, rash, and edema.

Comparison of laboratory parameters (Table 3) showed that the hemoglobin level was significantly different between the two groups (P < 0.005), and the severe scrub typhus group had lower hemoglobin levels. Comparison of platelet count showed a significant difference between the two groups (P < 0.001), although its clinical relevance was minimal. On average, platelet count in the severe scrub typhus group was lower than that of the non-severe group.

According to the liver function tests, liver enzymes (SGOT and SGPT) were found to be markedly higher in patients with severe scrub typhus. The average levels of SGOT and SGPT in the severe scrub typhus group were more than five times higher than the average SGOT and SGPT in the non-severe group. The bilirubin level, serum albumin, prothrombin time, and partial thromboplastin time were compared between the two groups, and the difference was statistically significant.

According to the odds ratio measurements, other significant parameters included altered sensorium, blood urea nitrogen level, creatinine level, and PICU stay. These parameters were expected to be higher in patients with severe scrub typhus. In addition, comparison of clinical presentations showed that the incidence of diarrhea was higher among patients with severe scrub typhus (OR = 3.159; CI = 1.290 to 7.736; P = 0.02).

In the present study, only 22.13% of the patients presented with eschar. There was no significance difference between the two groups with regard to eschar. In this regard, Karanth et al. (14), reported eschar in 40.38% of patients in the non-severe group. Conversely, in the study by Narayanasamy et al. (15), only 25% of patients with severe scrub typhus developed eschar. Kim et al. (11), reported that the absence of eschar is one of the predictors of disease severity in adults. Based on these findings, no clear evidence suggests that eschar is one of the predictors of disease severity. The causes of difference between these studies may be the location of the study populations, clinical knowledge of physicians about eschar, and earlier detection of eschar in febrile patients. The lower prevalence of eschar could be attributed to the dark skin color of the Indian population and the unusual feeding sites of chiggers (16, 17).

In the present study, the proportion of patients with GI symptoms was much higher in the severe group, whereas no such association was found in previous studies. Therefore, further studies are needed to support this association. In the present study, 1.7% of the patients had meningoencephalitis, whereas Narayanasamy et al. (15), showed a higher incidence rate (9%). The pathognomonic sign of this disease is the presence of organisms in CSF due to invasion and inflammation of leptomeninges. Although many studies have documented GI involvement in scrub typhus, the exact cause remains unclear.

Neurological symptoms, such as altered sensorium, were found to be more prevalent in children, which might be due to dyselectrolytemia, hypoxia, sepsis, and hypoglycemia. Moreover, 43.6% of children had elevation of SGOT fivefold (P < 0.001), whereas there was no case of hepatitis, probably due to mild portal inflammation, without causing significant hepatitis. The main causes of CNS involvement in scrub typhus were direct invasion of organisms across the cerebrospinal fluid (CSF) barrier and small vessel vasculitis changes in the meninges (18).

The serum albumin level was low in patients with severe scrub typhus (OR = 3; CI = 1.427 to 7.110; P < 0.006), which is probably due to increased capillary leakage from blood vessels, leading to hypoalbuminemia (19, 20). This association seems to be an independent risk factor for the severity of disease, as demonstrated by Lee at al. (21), and Kim et al. (20). In our study 69.2% of patients with severe scrub typhus had thrombocytopenia with platelet counts below 1.5 lakh/cumm. However, in the present study, there was no cut-off point for severe thrombocytopenia, unlike other studies. In addition, the results showed that 59% of patients with severe scrub typhus had anemia (Hb < 10 g/dL). Karanth et al. (14), also found that 47.4% of patients had anemia, which is one of the predictors of disease severity (Hb < 12 g/dL). Nevertheless, Kim et al., could not find such an association.

Based on the analysis of studies on the severity of scrub typhus (Table 6), some parameters were found to be common, including anemia, thrombocytopenia, and hypoalbuminemia, while other parameters, such as age, leukocytosis, eschar, multi-organ dysfunction syndrome, and serum creatinine could not be compared, most likely due to the insignificant number of cases. It was concluded that low hemoglobin level, thrombocytopenia, transaminitis, low albumin level, and prolongation of prothrombin time were the major predictors of scrub typhus severity in the present study.

The predictors of disease severity in the present study were anemia, hypoalbuminemia, thrombocytopenia, prolongation of prothrombin time, elevation of SGOT, and GI symptoms. The presence of one or more of these clinical and biochemical markers should raise the physician’s suspicion about the severity of the disease, warranting immediate and comprehensive treatment in view of the possible complications and highlighting the need for parental counseling about the disease.