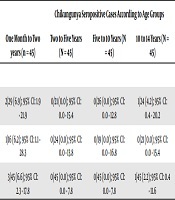 We aimed to investigate the seropositivity of IgG antibodies against Chikungunya and West Nile viruses in a group of Iranian children aged one month to 14 years.

A cross-sectional study was performed on blood samples collected from children aged one month to 14 years in Tehran who attended the outpatient clinics of a children’s hospital from March to December 2018. The serum IgG levels against Chikungunya and West Nile viruses were assessed using the ELISA technique.

The results of the seroprevalence of Chikungunya and West Nile viruses among children in Tehran showed the prevalence of these viral infections in this region. Therefore, these infections should be considered in the differential diagnosis for children with clinical symptoms of viral diseases.

Chikungunya is a transmissible viral disease through the bite of Aedes aegypti and Aedes albopictus mosquitoes. This disease is essentially a form of acute illness with fever, rash, and debilitating arthralgia (1). Chikungunya infection occurs predominantly in Africa, Asia, and the Indian subcontinent. Following the inoculation of the Chikungunya virus (CHIKV) through the bite of insects, the virus directly enters the subcutaneous capillaries and then enters into macrophage cells, fibroblasts, and endothelial cells to propagate in these cells (2). In terms of clinical manifestations, Chikungunya infection fever is associated with febrile illness with polyarthralgia and maculopapular rash. Three types of laboratory tests are available to diagnose Chikungunya, including virus isolation, genetic testing by RT-PCR, and serology.

The West Nile virus (WNV), a member of the genus Flavivirus that has been endemic to many countries in the world, was reported in nearly all of the United States and throughout Canada in 1999 (3). The virus can cause three invasive neurological diseases, including encephalitis, meningitis, and acute flaccid arthritis. According to studies, the high level of human infection with bird hosts is mainly reported in warm seasons, especially in the middle or late summer (4). The West Nile virus has a wide distribution across Africa, the Middle East, Eastern Europe, Western Russia, Southwest Asia, and Australia. Insect bites are the main causes of transmission of infection to humans. Infection is also transmitted through the injection of platelets, blood, or FPP, as well as the transplantation of the heart, liver, and kidney (5). Symptoms are mostly sudden and include headaches, anemia, fever, myalgia, chills, vomiting, rash, fatigue, and eye pain. However, fever may or may not occur, and the rash is usually observed in the extremities (6). Diagnostically, the level of IgM antibody in serum or CSF is completely diagnostic for West Nile infection using MAC-ELISA.

A cross-sectional study was performed on blood samples taken from children with the age range of one month to 14 years, attending the outpatient clinics of Mofid Children’s Hospital in Tehran from March to December 2018. In this analytical descriptive study, the sample size of WNV was estimated at 11%, based on a study in Iran (7), while the sample size of CHIKV was estimated at 0.4% based on a study in Turkey (8). The sample size calculation was performed based on the confidence interval estimation using the Wilson score interval method with a type I error of 0.05 to obtain acceptable precision (9). The final sample size was considered as 180 to estimate the presumed prevalence of 5% with a 95% confidence interval of 2.65 - 9.23.

According to the codes registered on the samples, the telephone numbers of subjects were obtained from the laboratory admission system. In the second stage, after telephone contacts with the children’s parents, the study checklist concerning age, gender, and place of residence was completed. In this stage, children with a history of blood transfusion, blood products, or IVIG injection and those not living in Tehran were excluded. In the third stage, 180 samples were categorized according to the age groups of children. Accordingly, the specimens were divided into subgroups of one month to two years, two to five years, five to 10 years, and 10 to 14 years of age. Finally, serum samples were tested using ELISA to determine the level of serum IgG against WNV and CHIKV. The ELISA method was used to identify WNV and CHIKV IgG. To this end, a special ELISA kit with a cutoff was selected. The cutoff value was defined by the manufacturer (Shanghai Crystal Day Biotech Co.).

Descriptive analysis was performed to describe the data, including mean ± standard deviation (SD) for quantitative variables and frequency (percentage) for categorical variables. The Fisher exact test was used to compare the seroprevalence frequency between the viruses in terms of sex and age groups. For this purpose, we used the statistical software IBM SPSS Statistics for Windows version 22.0 (IBM Corp. Released 2013, Armonk, New York).

A total of 180 serum samples (100 males and 80 females) were evaluated for the detection of IgG antibody against WNV and CHIKV. Forty-five specimens were collected from infants aged one month to two years, 45 from toddlers aged two to five years, 45 from children aged five to 10 years, and 45 from youngsters aged 10 to 14 years.

Table 1. Sex and Age Distribution of Chikungunya Infection Among Childrena

In the present study, the prevalence of antibodies against CHIKV and WNV in children aged less than 14 years residing in Tehran was found to be 2.2% and 6.1%, respectively. Although the cross-reaction IgG antibody can occur with other arbovirus infections and vaccination (yellow fever, Japanese encephalitis, dengue, and Zika), none of our samples had a history of these diseases or vaccination.

Numerous studies have been conducted regarding the prevalence of these two arboviruses in various parts of the world, mostly in adults, with widely varying results. In 2010, Moro et al. (10) found the frequency of infection with CHIKV as 10.2% (33 out of 325) in a study conducted in northeastern Italy on individuals up to 80 years of age. Balasubramaniam from Chennai in India reported a prevalence of 22.3% in 2011 (from a total of 1,589 people with fever and joint pain). These rates are much higher than those in our study; however, around 56% of the subjects in their survey were between 15 and 44 years of age, while we tested children less than 14-years-old (11). In a study carried out by Kajeguka et al. (12) in Tanzania on 1,100 individuals ranging from two to 70 years of age, IgG antibodies against CHIKV were found in 3.7%. In a recent study of testing the presence of the abovementioned virus using the Indirect Immunofluorescence test (IIFT) in 2017, Ataly et al. (8) from Turkey reported a rate of 0.4% (two out of 500 serum samples from healthy people were positive). Based on the literature search, we found only one study from Iran carried out in 1974 by Saidi (13) on the prevalence of arboviruses in 100 children aged one to six years in the Caspian Sea area. In their study, no evidence of infection by arboviruses was found in the specified age group. Wide variations in the reports of the prevalence of these viruses may be due to the age difference in the studied subjects, different geographical conditions, varying climates, differences in the ubiquity of Aedes aegypti as the vector responsible for the disease, and the methods utilized for testing the presence of the virus.

Another arbovirus transmitted by mosquito Aedes aegypti is WNV, the leading cause of mosquito-borne disease in the continental United States. Although most people infected with this virus do not feel sick, about one in five develops a fever, and about one in 150 infected individuals may develop a serious or even a fatal illness (13). The prevalence of WNV has been reported to range between 4.2% and 19.7% in different areas of the United States (14). However, studies from the African continent reported a significantly higher prevalence of WNV in the decades from the 1950s to 1970s, viz. 13% to 24% from South Africa, 60% to 74% from Egypt, and 3% to 65% from Kenya (15). In 2009, Wang et al. found 4.8% of children suspected with WNV fever to be positive for specific IgG against the virus (16). Studies from the Middle East have reported varying incidence rates according to the studied region and also based on the method of investigation. For example, Erguanay et al. (17) tested the sera of 181 people in southeast Turkey using IIFT and found 16% of the tested individuals to be seropositive for IgG against WNV.

The earliest study in this regard from Iran was carried out in 1976 by Saidi et al. (18) After testing the sera of 698 individuals, mostly children from 13 different provinces, they found a prevalence of 6.26% for antibodies against WNV. However, there was a wide difference between different regions in terms of seropositivity. In Diji from Khuzistan, 100% of children between the ages of five and 10 years were seropositive, while all individuals from Tabriz were seronegative; moreover, the prevalence of seropositivity in Rasht was only 1.8% (18). They attributed this difference to the fact that areas with high virus activity were major agricultural regions with widespread systems of irrigation canals that provided suitable breeding places for mosquitoes, serving vectors for WNV and other mosquito-borne diseases. In addition, warmer climates in those regions provided longer seasons of mosquito traffic. In 2005, Sharifi et al. (19) found 5% of 500 samples from adult blood donors in Tehran to be positive for IgG antibodies against WNV. These results are comparable to our findings in children and may indicate a marginal rise in WNV infection with increasing age. A study from Chahbahar carried out by Aghaie et al. (20) on 540 healthy volunteer adult blood donors discovered antibodies against WNV in 8.2% of the participants. However, studies by Chinikar et al. (2010, 2012) in five provinces in North and Central Iran on 300 serum samples from asymptomatic adults showed that the seroprevalence rate of WNV IgG antibody was 1.3% (20, 21). In the northeast of Iran, the prevalence of WNV appears to be higher, as a study done by Mishkat et al. (7) on 182 asymptomatic participants with the age range between 15 and 65 years revealed the IgG seropositivity in 11% of the studied subjects. However, these findings need to be confirmed by further studies. As stated above, variations in the prevalence of arboviruses in different regions may be attributed to different factors, including the season during which the survey was done, as mosquito activity is highest in warm rainy seasons.

In our study, although the seroprevalence of both types of viral infections was more common in boys than in girls, the difference was not significant. Regarding differences in age groups, the infection was found to be more common in age groups of less than two years (all less than six-months-old) and over 10 years than in children between two and 10 years of age. Higher levels of IgG antibody in infants less than six-months-old indicate the transfer of maternal antibodies through the placenta, while higher levels in older children may be attributed to increasing age, the wider range of outdoor activities, and more frequent exposure to mosquitoes. However, considering the limited sample size and short-time span of the study (nine months), it was not possible to accurately assess seroprevalence throughout the year and to determine the seasonal incidence of these viruses. However, given that the study is the first report of the seroprevalence of these infections in children in Iran, the information obtained should prove to be valuable.

As a conclusion, the positive seroprevalence of Chikungunya and West Nile viruses in a sizeable percentage of the studied children indicates a notable incidence of these viral infections in this region of the country. Therefore, these infections should be considered in the differential diagnosis for children with clinical symptoms of viral diseases. To obtain more accurate statistics on the prevalence and distribution of seasonal infections among children of various gender and age groups in Iranian society, more studies with larger sample sizes and longer follow-up times are required.

The authors would like to appreciate the staff of the Infectious Diseases Research Laboratory and Center, Mofid Children’s Hospital.