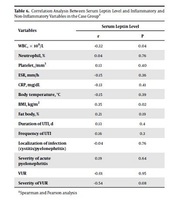 Leptin is a hormone that plays an important role in human health against infections. Some studies have reported that leptin acts as a reactant phase marker in some infectious diseases. The role of leptin in febrile urinary tract infection (UTI) has not been adequately evaluated.

This study was conducted to determine the role of serum leptin in febrile UTI in children.

The present study showed that although serum leptin increases in febrile UTI, this increase is not correlated with C-reactive protein and erythrocyte sedimentation rate. Also, this marker cannot discriminate between cystitis and acute pyelonephritis.

Leptin is a hormone mainly produced and secreted by white adipose tissue and considered as an adipokine (1). This hormone was first identified in 1994 and is a 16KDa protein with 167 amino acids produced by the obese gene. This gene is located on chromosome 7 in humans (2, 3). Leptin, in addition to adipose tissue, is produced in low amounts by other organs of the body, such as pair, stomach, pancreas, ovaries, bone marrow, and lymphoid tissue (1, 2). Although the most important role of leptin is to regulate food consumption besides energy expenditure, in recent years, the role of this hormone has been declared in immune functions and inflammatory processes (4-6). It has been reported that leptin is an inflammatory marker that increases in bacterial infections such as respiratory diseases, Urinary Tract Infection (UTI), and sepsis (7-10). According to Maruna et al. (8), there is a significant association between leptin and CRP. These authors pointed to the role of serum leptin in regulating the synthesis of acute-phase proteins during the systemic response. Regarding the above-mentioned issues, these questions were posed to us: How does leptin change in febrile UTI? Can serum leptin be used as an inflammatory marker in children with febrile UTI?

Urinary tract infection is a common disease in infants and children (11). The incidence of the disease among girls and boys up to six years of age is 3% - 7% and 1% - 2%, respectively. About 12% - 30% of these children have recurrent UTI (12). Urinary tract infections are caused by the invasion of pathogenic organisms, especially bacterial agents, to the urinary tract. The most common cause of UTI is Escherichia coli. This organism is responsible for 85% - 90% of UTIs (12, 13). The two most common forms of urinary infection are cystitis and acute pyelonephritis (11, 13). Acute pyelonephritis is a severe form of the disease, and its delayed management may result in severe complications such as renal scarring (13-15). Due to the late preparation of urine culture results and the unavailability of DMSA renal scanning (16) in most centers, the decision to initiate antibiotic therapy in children with UTIs is usually based on clinical symptoms and the use of routine inflammatory markers such as ESR and CRP (4). Studies conducted regarding the role of leptin in febrile UTI are rare. This study was directed to determine the relationship between serum leptin and febrile UTI in children.

This study was conducted to determine the role of serum leptin in febrile urinary tract infection in children.

Thirty-nine febrile UTI patients (case group) were compared with 40 healthy children (control group) for serum leptin levels. The present study was conducted at Qazvin pediatric referral hospital, Qazvin, Iran, in 2018. The inclusion criteria for the case group were: (1) one month to 12 years of age; (2) UTI manifestations (such as fever, abdominal pain, dysuria, frequency 0; (3) abnormal urinalysis (such as more than 5 WBC/microscopic field, positive nitrite test, bacteruria); and (4) positive urine culture (more than 105 of a single bacterium per milliliter of urine (CFU/mL) using midstream or clean catch methods, more than 103 bacteria per milliliter of urine (CFU/mL) using catheterization, and the presence of any organism in urine culture by the suprapubic method (13, 17). Patients who had received antibiotics or had associated or underlying diseases were excluded. The control group was chosen via the group matching method from healthy children who visited the hospital’s health center for growth control or those who were hospitalized in the surgical ward for elective surgery. Both groups were identical in terms of underlying and interventional variables such as gender, age, height, head circumference, body mass index, and body fat percent. All children were living in Qazvin.

Dimercaptosuccinic acid (DMSA) renal scan was performed to differentiate between acute pyelonephritis and cystitis. Acute pyelonephritis was defined by the existence of focal or diffuse areas of reduced uptake associated with the preservation of the renal cortical outline. The presence of clinical symptoms and laboratory findings of UTI, along with normal DMSA renal scan, was considered as a lower UTI (cystitis) (17, 19). Voiding cystoureteroghram was done for detecting vesicoureteral reflux (17).

Three-milliliters of whole blood was taken from all children. After centrifugation at 3,000 rpm for 5 min, the serum was separated and stored at -20°C until examination. The serum leptin levels were measured by the ELISA method with human leptin ELISA kit (DBC Diagnostica Biochem Canada-Inc., Ontario, Canada, Lot: 180540, REF: CAN-L4260) (INTRA-ASSAY 3.7 ng/mL, INTER-ASSAY 5.9 ng/mL) with an Orense device (USA). To increase accuracy, the tests were double checked. White blood cell counts, neutrophil counts, platelet counts, quantitative C-reactive protein, and erythrocyte sedimentation rate were measured by standard methods. All tests were done at the Qazvin Children’s Hospital.

The chi-square test was used for the comparison of qualitative variables and the student t-test (mean ± SD) and non-parametric tests [Mann-Whitney U-test, median, interquartile range (IQR)] for the comparison of quantitative variables between the groups. Spearman and Pearson’s analyses were used for correlation analysis. All statistical analyses were done using SPSS for Windows version 16.0 (SPSS Inc., Chicago, IL). The P values of less than 0.05 were considered significant.

The study was approved by the Ethics Committee of Qazvin medical college (code: -IR.Qums.REc.1395.230). All parents were provided with information about the research project. Children were enrolled in the study after their parents agreed and signed the informed consent form.

Table 1. Comparison of Variables Between Febrile UTI and Control Groupsa

Table 4. Comparison of Serum Leptin Level Between Children with and Without VUR

Table 6. Correlation Analysis Between Serum Leptin Level and Inflammatory and Non-Inflammatory Variables in the Case Groupa

Although the present study showed that the serum leptin level increased during the acute phase of febrile UTI, this marker could not distinguish between cystitis and acute pyelonephritis. Studies conducted on leptin alterations in infectious diseases, especially UTIs in children, are rare (7-10, 20). A study by Militsi et al. (9) on 27 children with urinary and respiratory infections showed that the serum leptin level increased in the acute phase of the disease and decreased after antibiotic therapy.

Leptin is a prototypical adipokine with a 167-amino acid peptide structure, mainly produced by adipose tissue and, in small amounts, by other organs, such as the placenta, ovaries, and lymphatic tissues (1). This hormone plays a major role in insulin secretion, reproductive, metabolic, angiogenesis, neuroendocrine, and immune functions (1, 2). There are different opinions about the pathogenesis of leptin alterations in acute inflammation and acute infection and its relationship with cytokines such as tumor necrosis factor-α and interleukin-6 (9, 10). Some believe that in the acute phase of infectious diseases such as UTI and sepsis in which the patient is under stressful conditions, the increase of inflammatory cytokines and the activation of the hypothalamo-pituitary adrenal axis can lead to an increase in leptin while its level decreases by the prolongation of the disease, reduction of growth hormone axis activity, and decrease of insulin -like growth factor I level (10). Others believe that leptin has a pro-inflammatory property, acts like acute- phase reactants, regulates and increases the secretion of inflammatory cytokines such as TNFα, IL6, and IL12, mutually increase in the secretion of TNF-α and IL-1β causes the increase in the expression of leptin mRNA in adipose tissue (24-26). According to a report by Militsi et al. (9), the release of endotoxin by bacteria stimulates and secretes leptin in the acute phase of acute inflammation. These authors believe that leptin is an electrochemical marker and plays an important role in the cytokines network, regulation of the inflammatory-immune response, and the defense mechanism of the host (9). According to the present study, it seems that the increase of serum leptin levels in UTI patients is related to cytokines network activation or endotoxin secretion by Gram-negative organisms that are responsible for UTIs. However, due to the meaningful relationship of serum leptin with body mass index and its significant negative association with white blood cell counts, the alterations of serum leptin should be carefully interpreted. Meanwhile, due to the lack of significant differences in serum leptin concentrations between children with and without vesicoureteral reflux, children with cystitis and chronic pyelonephritis, and children with one-time UTI or recurrent UTI, we do not recommend using this marker for the diagnosis of these cases. Our limitations were the lack of serum leptin measurement after antibiotic treatment and the lack of measurement of inflammatory cytokines.

This study showed that although serum leptin increases in febrile UTIs, this increase is not correlated with C-reactive protein and erythrocyte sedimentation rate. Also, this marker cannot distinguish between cystitis and acute pyelonephritis.

Our thanks and best regards go to the Research Department of Qazvin University of Medical Sciences and parents of children for their cooperation.