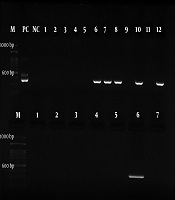 Helicobacter pylori Colonization in Patients with Adenotonsillar Hypertrophy: Study on Prevalence and Clinical Characteristics of Colonized Patients and Possible Association with Complications

Adenotonsillar hypertrophy (ATH) is a common problem in children that causes the obstruction of airways and other relevant complications. Helicobacter pylori (H. pylori) is considered one of the microbial causes of ATH development.

The study aimed to determine the H. pylori colonization in patients with adenotonsillar hypertrophy and assess the prevalence and clinical characteristics of colonized patients and possible association with complications.

This study was carried out on 114 children with ATH referring to the Bouali Hospital of Sari from December 2017 to December 2018. Adenotonsillar samples were prepared from the right and left tonsils and adenoid of each patient. The Rapid Urease test (RUT) and nested-PCR were performed on the samples. Data analysis was performed with SPSS version 20 software.

The participants included 52 females and 62 males with a mean age of 7.19 ± 3.08 years. The RUT was positive for 59 participants: 26 in right tonsil, 31 in left tonsil, and two in adenoid samples. Helicobacter pylori was detected in the adenotonsillar tissue of 95 patients using nested-PCR. No significant association was found between the PCR results and gender (P = 0.123).

Adenotonsillar hypertrophy (ATH) is considered one of the most common etiologies of airway obstruction among children, which results in a range of temporary to long-term symptoms (1). Temporary symptoms include oral respiration, nasal congestion, hypernasal speech, snoring, obstructive sleep apnea, chronic sinus problems, and recurrent otitis media (2, 3). Meanwhile, other long-term symptoms include a series of major complications associated with obstructive sleep apnea including developmental disabilities, cardiac complications, and neurocognitive anomalies such as low intelligence quotient (IQ), learning and behavioral problems, hyperactivity, and poor attention span (1, 4). Tonsillectomy and adenoidectomy are common therapeutic approaches for patients with ATH (4). Several studies have recently discussed the etiology of the disease. Based on the studies, a microbial and inflammatory cause has been proposed for ATH (1).

Different studies have proven that the adenoids of patients (hyperplasia or infection) are colonized by a variety of bacteria including Haemophilus influenza, Moraxella catarrhalis, beta-hemolytic Streptococcus group A, Staphylococcus aureus, and Streptococcus pneumonia (1, 4, 5). It is suggested that oropharynx or pharynx may be a reservoir for H. pylori and this microorganism may be colonized in tonsil and adenoid tissues (6, 7).

Helicobacter pylori (H. pylori) is a Gram-negative, microaerophilic, flagellate, and s-shaped bacteria, which was isolated from human stomach biopsy samples and introduced by Marshall and Warren in 1983 (8). It is the most common bacterial infection in humans, which infects almost half of the world’s population (9). Infection usually occurs in early childhood and may remain throughout the entire lifetime in the host. The presence of H. pylori has been reported in the upper respiratory tract, and the sites such as the oral cavity, dental plaques, saliva, tonsils, adenoids, nasal and sinus mucosa, and even the middle ear (10).

It is believed that tonsil and adenoid tissue may form a colonization reservoir or an H. pylori colony, which can cause stomach and nasopharyngeal infection and clinical consequences (7, 11-13). Other researchers discovered no evidence of its presence in the sites, and the third group of authors believes that this agent is only a transient organism in the sites (14, 15).

This descriptive cross-sectional study was carried out on 114 children with ATH referring to the Pediatric and Otolaryngology Department of Bouali Hospital of Sari from December 2017 to December 2018 who were candidates for adenoidectomy, tonsillectomy, and adenotonsillectomy. The study was approved by the Ethics Committee of Mazandaran University of Medical Sciences (ethics code: IR.MAZUMS.REC.1396.2907) and written informed consent was obtained from the parents of patients prior to the study. Data including demographic information, sleeping with opened mouth, nasal congestion, rhinorrhea, snoring, maxillary deformity, and sleep apnea were recorded in a questionnaire by a pediatric assistant.

A pediatric infectious diseases subspecialist or an ENT specialist confirmed ATH of the patients. All patients underwent surgery under general anesthesia. Three samples (right tonsil, left tonsil, and adenoid) were obtained from each patient to detect H. pylori colonization in adenotonsillar tissue. All samples were stored at -20°C and prepared for the rapid urease test and PCR.

The samples were stored in a 2 mL urea broth base and transferred to a Microbiology Laboratory to perform the urease test. The samples were incubated at 37°C for 4 h. Yellow and red colors were reported as negative and positive results, respectively.

We extracted DNA from frozen biopsies using the tissue DNA extraction kit (Yekta Tajhiz Azma) and stored it at -20°C before the PCR assay.

For the next step, the nested-PCR technique was employed with specific primers Hp23S 1942F designed with the sequence of 5’- ATG CGT CAG TCG CAA GAT-3’ as the forward primer and Hp23S 2308R 5’-CCT GTG GAT ACA GGC CAGT-3’ as the reverse primer. The initial denaturation temperature of 95°C for 2 min was followed by 25 cycles at 94°C for 10 s. The H. pylori strain was used as a positive control in all the steps. The gene amplification was performed at the final volume of 20 µL: 2 µL of DNA, 5.0 µL of forward and reverse primers, 10 µL of Master Mix, and 7 µL of distilled water. The PCR products were electrophoresed on the 2% agarose gel and then observed under a UV lamp using a duct gel (Figures 1 and 2). Statistical analysis was performed using SPSS version 20.0 software. The mean ± SD was calculated for age. The chi-square and independent t tests were used to compare the quantitative and qualitative data, respectively, between positive and negative H. pylori participants.

All children underwent tonsillectomy and adenoidectomy (114 cases) and a ventilation tube was inserted for 17 (14.9%) cases; 17 (14.9%) of them had serous otitis media.

Table 2. The Results of Rapid Urease Test on Right Tonsil, Left Tonsil, and Adenoid Samples of Patients with Adenotonsillar Hypertrophya

Table 3. The Results of Polymerase Chain Reaction on Right Tonsil, Left Tonsil, and Adenoid Samples of Patients with Adenotonsillar Hypertrophy

In this study, the nested-PCR results were positive for H. pylori in 17.54% of the ATH patients. The results of various studies indicated contradictory data on the presence of H. pylori in tissues. Our study is consistent with some studies (6, 7, 16-18), but it is inconsistent with other studies (9, 11, 19, 20). Eyigor et al. (11) discovered no positive samples among RUT-positive samples using the PCR technique. Bitar et al. (5) collected 13 adenoid samples and the nested-PCR was negative for 10 RUT-positive samples. The results show that the failure to prove H. pylori colonization might be due to the difference in gene sequences and the low number of samples in the two studies as compared to our study. In addition, the population studied by Bitar et al. (5) was different from ours. Guclu et al. showed a low incidence of H. pylori colonization in adenoid and tonsil tissues (18). Also, Kraus et al. (17) detected the presence of H. pylori in adenotonsillar tissue of children by real-time PCR (48 positive samples out of 49 samples). Vilarinho et al. (9) reported that the positive samples in RUT and histochemical studies were negative in peptide nucleic acid (PNA)-FISH and PCR-DNA ELISA tests. With respect to the higher sensitivity of PNA-FISH and DEIA tests, they acknowledged that the results obtained from RUT and histochemical tests were false-positive.

One of the most important aspects of using a rapid urease test is that although this technique has high sensitivity and specificity in examining stomach samples, it never seems that this technique maintains the same sensitivity in extragastric samples such as adenotonsillar tissue; in particular, these tissues are rich in microorganisms that are capable of producing urease. Therefore, the presentation of false-positive results by diagnostic tests based on urease enzyme function is inevitable (5, 9). It can be concluded that RUT is not a reliable tool for H. pylori diagnosis in adenotonsillar tissue. The results of studies by Unver et al. (18) and Doustmohammadian et al. (23) are not very reliable. As H. pylori is hardly cultivated in artificial cultivation environments (7), scientists are looking for more precise and sensitive techniques such as molecular methods (nested-PCR, PCR, etc.) for its diagnosis (24). Since PCR never indicates the presence of active bacteria in the tissue, it may be argued that they were returned from the stomach to the adenotonsillar tissue (5, 16). Similar to our study, H. pylori was detected in the tonsillar and adenoid tissue of children with chronic adenotonsillitis by RUT and nested-PCR (21, 25-27). The PCR analysis in Bulut et al.’s (16) study showed that 24.6% were positive for H. pylori. Also, H. pylori was detected in children with otitis media and had an important role in otitis media pathogenesis (19). Contrary to us, in Aliakbari et al.’s (28) study, no correlation was found between the seropositivity of H. pylori and the presence of H. pylori in adenotonsillar tissues. Their results did not support the role of adenotonsills as a reservoir for H. pylori.

To sum up, this study was unable to prove an association between H. pylori adenotonsillar colonization and acute otitis media, serous otitis media, sleep apnea syndrome, asthma, allergy, and atopic dermatitis. Actually, the type of study could not prove the causality of H. pylori for ATH. This needs to prove the pathogenetic mechanisms and microbial factors that, alone or in association with other microorganisms, can cause ATH. In general, several reasons can be mentioned for explaining the contradiction observed in the results of various studies on the prevalence of H. pylori in adenotonsillar tissue. Based on the results of this study, further studies are recommended by recruiting a larger sample size, obtaining gastric endoscopy and biopsy for H. pylori, and employing culture and antibiogram tests. Also, since RUT lacks high sensitivity and specificity for H. pylori detection in adenotonsillar tissue, molecular tests are recommended for diagnosis.

This study confirmed the presence of H. pylori in the adenotonsillar tissue of children with ATH. The study results encouraged the notion that the pharynx can be an extragastric reservoir for H. pylori. However, we failed to prove an association between H. pylori adenotonsillar colonization and ATH, acute otitis media, serous otitis media, sleep apnea syndrome, asthma, allergy, and atopic dermatitis.