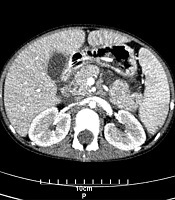 Posaconazole-Induced Acute Pancreatitis: A Rare Side Effect in a Child with Chronic Granulomatous Disease

A 10-year-old girl with a three-year history of chronic granulomatous disease (CGD) was admitted to hospital due to epigastric pain, nausea, vomiting, loss of appetite, and fever for the last four days. The pain was persistent and prominent in the periumbilical area. The patient was on lifelong antifungal prophylaxis for her illness. On abdominal sonography, the head of the pancreas was inflated, which can indicate pancreatitis. All the medications were discontinued at the time of admission, and along with sufficient hydration, acetaminophen was administered for the patient’s pain. One, three, and twelve months after discharge, the patient was visited for follow-up with no signs of stomach discomfort, and the lab data was within the normal limits. CGD is a rare disease in which the phagocytes fail to produce hydrogen peroxide. Such patients are prone to bacterial and fungal infections.

In conclusion, this is the second case of posaconazole-induced pancreatitis and the first case in children; thus, we recommend that physicians should be aware of the signs of pancreatitis in high-risk individuals like immunocompromised pediatric population.

Based on the International Study Group of Pediatric Pancreatitis: In search of a CuRE (INSPPIRE) guidelines, acute pancreatitis is diagnosed when two of the following three criteria are present: (1) clinical symptoms such as abdominal pain, nausea, vomiting and back pain; (2) high levels of serum amylase and/or lipase; and (3) imaging findings (4). The most prevalent etiologies of pancreatitis in children include biliary diseases, drug-induced pancreatitis, recurrent hereditary pancreatitis, and trauma. Also, up to 30% of pancreatitis cases have no definite etiology (5). The early diagnosis of pancreatitis can lead to a better clinical outcome and prevent related complications.

Among the etiologies, drug-induced etiology is responsible for 13% to 30% of pancreatitis cases in children (6). Possible mechanisms for drug-induced pancreatitis include cytotoxic effects, pancreatic duct constriction, accumulation of toxic metabolites, and hypersensitivity reactions. Medications can also induce pancreatitis due to their adverse effects, for example, hypertriglyceridemia and chronic hypercalcemia. Localized angioedema in the pancreas and arteriolar thrombosis are among other probable mechanisms. Angiotensin-converting enzyme inhibitors, statins, oral contraceptives, diuretics, highly active antiretroviral therapy, valproic acid, and hypoglycemic agents are among the most suspicious agents which can induce pancreatitis. So far, there has not any report of posaconazole-induced acute pancreatitis in children. Hence, in this report, we present a case of acute pancreatitis due to posaconazole consumption in a 10-year-old child.

A 10-year-old girl (weight: 19 kg; height: 122 cm), who was a known case of chronic granulomatous disease (CGD) from three years ago, was admitted to Mofid Children’s Hospital, affiliated to Shahid Beheshti University of Medical Sciences, Tehran, Iran. She was suffering from epigastric pain, nausea, vomiting, loss of appetite, and fever for the past four days. On admission, she was conscious and fully oriented to time, place, and person. Also, she was ill, but not intoxicated.

The epigastric pain was persistent and prominent in the periumbilical region. The pain often intensified after meals and alleviated in the supine position. Defecation habits were regular, and no respiratory or urinary symptoms were observed. She had a history of pulmonary tuberculosis followed by prolonged pulmonary aspergillosis. Abdominal examination showed generalized tenderness without localized symptoms. The patient had a history of splenomegaly due to her CGD. The vital signs were as follows: blood pressure: 90/70 mmHg, heart rate: 58 beats per minute, respiration rate: 25 per minute, and temperature: 38°C.

Her previous admission was one month earlier with a diagnosis of pulmonary aspergillosis. She was taking the following medications for the past three years. Gamma Interferon at a dose of 35 µg every other day, trimethoprim/sulfamethoxazole (TMP/SMX) at a dose of 400/80 mg daily, pantoprazole at dose of 20 mg daily, and ferrous sulfate and acid folic once a day.

On the last admission, posaconazole syrup at a dose of 5 cc every 8 hours was added to her drugs due to unavailable medications in the Iranian pharmaceutical market. We could not use other azoles because the syrup dosage forms of them were unavailable in the Iranian pharmaceutical market. It is notable that antifungals must be initiated sooner in such cases, but the patient and her family had a poor adherence to following medical problems.

Lab data on admission are shown in Table 1. Blood and urine culture were negative. The drug-drug interactions were reviewed, and the only interaction was between pantoprazole and posaconazole, which may reduce the posaconazole plasma levels. On abdominal sonography, the liver was the upper limit normal size with a homogenous pattern (118 mm). The head of the pancreas was inflated, which can indicate pancreatitis. Splenomegaly was detected (125 mm), and CBD (common bile duct) was mildly prominent, which was due to her CGD disease. A spiral CT scan without injection was performed, and splenomegaly with moderate free fluid in the abdominal cavity with an enlarged pancreas head was detected (Figure 1).

Table 1. The Laboratory Data of the Patient on Admission and at Discharge 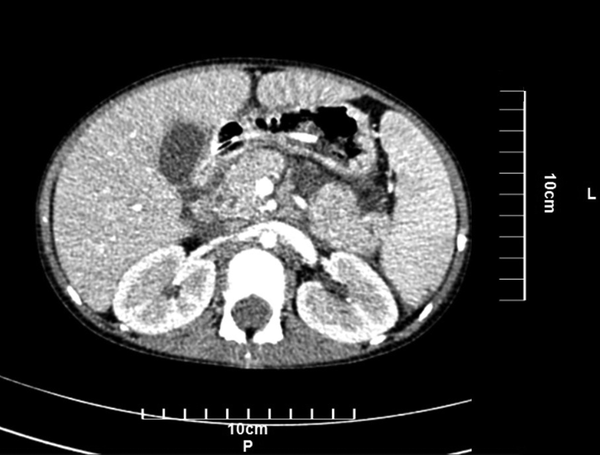 Surgical consultation for pancreatitis was ordered, and no surgical intervention was recommended. With the above interpretations, the diagnosis of posaconazole-induced acute pancreatitis was confirmed. The Naranjo Adverse Drug Reactions Probability Scale (NADRPS) was used for the evaluation of the causality of this event, and it was found this event is probable due to posaconazole administration (supplementary file Appendix 1) (7). Consequently, all the medications were discontinued on admission, and itraconazole at a dose of 100 mg twice daily and acetaminophen at a dose of 240 mg every 6 hours was administered. After two weeks, the patient recovered, and the lab data changed to normal values. Finally, the patient was discharged with the previous medications except for posaconazole, which was substituted with itraconazole. One, three, and twelve months after discharge, the patient was visited for follow-up with no signs of stomach discomfort, and the lab data are presented in Table 1. The patient also successfully recovered after transplantation.

Gallstone disease and chronic alcohol consumption are the two most common causes of pancreatitis. Drug-induced acute pancreatitis (DIAP) is a rare condition with an estimated incidence of 0.1% to 5%. Children are at higher risk for DIAP (1). In literature reviews, DIAP has been reported due to various antifungals (azoles) such as itraconazole (8), voriconazole (9), and fluconazole (10).

To the best of our knowledge, we reported the second case of posaconazole-induced pancreatitis and the first one in children. Although pancreatitis has been reported with TMP/SMX in various articles (11), the signs and symptoms of pancreatitis were not reported after re-challenge of this drug for this patient. The mechanism of DIAP is not fully understood, but it seems to be related to constriction of the pancreatic duct, metabolic and cytotoxic effects, toxic metabolite accumulation, and intermediary and hypersensitivity reactions (12). Also, it can be induced by adverse drug effects such as hypertriglyceridemia and chronic hypercalcemia (13).

The use of posaconazole in children under 12 years of age is not FDA approved, but unlabeled use of drugs in children is common because of a lack of data in this population. The majority of data regarding the safety of drugs in children is based on reports. The higher rate of drug-induced pancreatitis in children could be related to the fact that other pathologies such as alcohol abuse, hypertriglyceridemia, and gallstone are not common in this population. Two reasons could help understand the mechanism behind the posaconazole-induced pancreatitis. The first is that the use of another azole (itraconazole) did not cause another episode of pancreatitis; thus, it is less likely that the immune system is involved in this reaction. The second reason is that posaconazole is often used at specific doses in children (200 mg every 8 hours), which can lead to toxicity in smaller children. Hence, this case emphasizes the rare side effect of posaconazole that should be considered in the same population.

Any underlying causes altering the azole metabolism, such as renal or liver failure and drug-drug interactions, may lead to such adverse drug reactions. Clinicians should be aware of diagnosing such cases promptly, and it is necessary to modify their medications to avoid the progression of pancreatitis. Also, it is recommended to evaluate the posaconazole metabolism through therapeutic drug monitoring (TDM) programs or measuring the CYP2C19 activity.