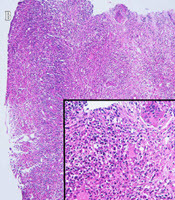 Primary cutaneous tuberculosis (PCTB) is a relatively uncommon presentation, particularly in immunocompetent subjects and its diagnosis may be delayed, as it resembles many other skin infections.

The authors reported a case of PCTB in a 41-year-old Iranian female who presented with a 2 × 5 cm, erythematous swollen skin lesion over the dorsal aspect of the finger that had been diagnosed as a bacterial infection; after admission, the diagnosis of tuberculosis was also masked by a positive polymerase chain reaction for deep mycoses which resulted in a delay in treatment and several months of morbidity. The mycobacterial infection was confirmed by a positive culture for M. tuberculosis and the patient responded well to the anti-TB treatment.

A diagnosis of PCTB should be kept in mind in all patients who present with a chronic skin infection (especially nodular, ulcerated, and purulent lesions) with no response to initial antibacterial therapy.

Cutaneous tuberculosis (TB) is an extrapulmonary manifestation that includes < 2% of all cases of TB; the disease is therefore often misdiagnosed (1, 2). Primary cutaneous infection mainly results from direct inoculation of bacilli into the skin and it is thought to be mostly an occupational disease and more frequent in children (3). This report describes a case of primary cutaneous TB (PCTB).

A 41-year-old female presented with a two-year history of an ulcerative and painless lesion over her finger that failed to improve with various antibiotic regimens (cephalexin, cloxacillin, clindamycin and vancomycin). At first, a subcutaneous nodule was developed and then its size gradually increased and evolved into multiple small ulcers.

The patient was a housewife and lived in an area of low socioeconomic conditions. She denied prior history of trauma at the site or closed exposure to individuals with a chronic cough. She did not have cough, fever, recent weight loss, or night sweats.

On examination, there was a 2 × 5 cm, erythematous swollen lesion with multiple small ulcers and a scant purulent discharge over the dorsal aspect of the right index finger (Figure 1A). No regional lymphadenopathy or systemic abnormalities was detected on the examination and laboratory tests. The joints and bones of the finger were normal on plain radiograph.

Figure 1. A, Erythematous lesion with swelling and multiple small ulcers over the finger; B, ill-defined epithelioid granulomas and giant cells (inset) with inflammatory cell infiltrations in the dermis (H&E, ×200; inset, ×400)

The chest X-ray was normal and PPD testing showed an induration of 10 mm. Pending tissue culture results, she was started on itraconazole 400 mg/d for 4 weeks but no improvement was seen; so caspofungin (CANCIDAS, 70 mg stat then 50 mg/day/IV infusion) was added. There was no significant improvement despite continuing treatments for two weeks more. We were informed that M. tuberculosis complex was identified by the tissue culture. The PCR study for deep mycoses was performed again and its result was negative; so finally the diagnosis of PCTB was made and the patient was started on ethambutol, isoniazid, pyrazinamide, and rifampicin for 2 months followed by a 4-month course of isoniazid and rifampicin. The lesion completely improved with a hypertrophic scar by the end of the anti-TB treatment (Figure 2). Figure 2. Improvement of the lesion with a hypertrophic scar after treatment with anti-TB regimen

Although PCTB occurs uncommonly, it should be considered in atypical skin infections. Due to variable clinical presentations and also in the absence of pulmonary tuberculosis, the diagnosis of PCTB is sometimes challenging (3). We reported a case of PCTB in an immunocompetent patient with no history of pulmonary TB. Initially this case was started on antibiotic therapy with diagnosis of a bacterial infection and then the diagnosis of tuberculosis was delayed by a false positive PCR result for deep mycoses.

Tuberculosis is mainly transmitted through airborne particles, but cutaneous involvement may be caused by hematogenous spread or contiguous infected foci (4). In general, direct inoculation of the M. tuberculosis through a skin abrasion in a person with no immunity against the microorganism causes PCTB; so lesions are most commonly located on the face and acral areas (1, 4).

A review conducted by Semaan et al. (1) reported 26 immunocompetent cases of PCTB; sixteen cases had no history of TB exposure (as our case) and 7 patients did not have any documented history of skin trauma.

In PCTB, at first an ulcer with a granular, deep red basis and indurated edges develops, then its size may be increased and the surrounding skin may have a reddish-blue hue (1). The clinical features vary markedly, so the diagnosis may be delayed (3, 5, 6).

Noticeable histological findings include granulomatous tubercles with epithelioid cells, giant cells, and a mononuclear infiltrate. It should be noted that other infections including fungal and atypical mycobacterial infections may also have similar findings (1, 7).

In our patient, the lesion was misdiagnosed as a bacterial infection and then as a deep mycotic infection. We suspected the diagnosis due to a poor response to previous treatments and the mycobacterial infection was finally confirmed by isolation of M. tuberculosis complex in the culture (3).

Although, the diagnosis needs correlation of clinical and histopathological features, the definitive diagnosis is based on the isolation of bacilli by the mycobacterial culture. Management of cutaneous tuberculosis is similar to pulmonary TB (1, 4).

Our case was followed up over the course of anti-TB regimens and she responded well to the treatment.

Primary cutaneous tuberculosis is an infection with various clinical presentations and it should be considered in all patients who present with a chronic skin lesion (especially nodular, ulcerated, and purulent lesions) with no response to antibacterial regimens. Moreover, complete microbiological assays including PCR and culture should be performed for any persistent non-healing wound (8).