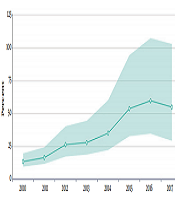 HIV/AIDS is the leading cause of death among women in the reproductive age worldwide. Furthermore, it is estimated that nearly 1000 children under the age of 15 years acquire HIV infection in the world each day; this is while over 90% of HIV infections among them are due to mother-to-child transmission (1).

Prevention of mother-to-child transmission (PMTCT) programs provides antiretroviral treatment (ART) to HIV-positive pregnant women to stop their infants from acquiring the virus. Without treatment, the chance of HIV transmission from the mother to her child is 15% to 45%, while through ART this risk reduces to below 5% (2). Results of a systematic review on Sub-Saharan African countries showed that long-standing health-systems issues, such as staffing and accessibility to health services as well as community-level factors like stigma, fear of disclosure, and lack of partner support has the deterrent effect on using PMTCT programs (1). Below we introduce PMTCT program indicators in Iran and evaluate the effectiveness of this program for HIV among Iranian neonates born to HIV-positive mothers and describe the challenges and achievements of the program.

The above results indicate that Iran has taken important steps in prevention of PMTCT. However, as PMTCT is not 100% effective, according to WHO the targets elimination of HIV is defined as reducing the final HIV transmission rate to 5% or less among breastfeeding women and to 2% or less among non-breastfeeding women by 2020 (4). Therefore, there is a long way to reaching the ideal state.

The World Health Organization (WHO) recommended a comprehensive approach to prevention of PMTCT, which should be considered in the PMTCT program and includes:

- Preventing new HIV infections among women in the reproductive age

- Preventing HIV transmission from HIV infected mother to her child

- Providing appropriate treatment, care, and support to mothers living with HIV and their children and families (5).

From the year of 2006, the provision of ART for prevention of MTCT has been placed in the national guidelines regarding treatment and care of HIV positive patients. In 2013 a plan was conducted in 166 high-risk zones in 14 provinces in Iran with the aim of reducing MTCT. This plan contains prevention of infections in women and young girls; family planning and reproductive health for women infected with HIV, healthy childbirth for infected women, and newborn follow-ups, care, and treatment for infected newborns. Although requested HIV testing for all pregnant women are implemented routinely in many private and academic sector physicians, the real figure for HIV tests remains unknown in Iran (6).

Results of one study in Tehran showed that the knowledge of pregnant women about preventive methods and use of antiretroviral was very poor (7). Therefore, it seems that besides providing appropriate drugs and prevention facilities, providing prenatal educational programs on HIV/AIDS with emphasis on preventive measures and availability of antiretroviral medications is necessary for preventing PMTCT.