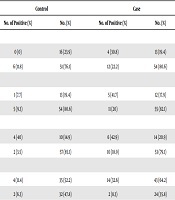 Recently, infection has been considered one of the most important causes of cancers because a large number of cases of cancer with infectious origin was reported.

The present investigation aimed to evaluate the prevalence and risk factors of Blastocystis hominis infection in patients with colorectal cancer in comparison to healthy individuals.

The present descriptive case-control study was performed on 67 healthy individuals and 67 patients with colorectal cancers attending the general hospitals of Lorestan Province, Western Iran from October 2017 to August 2018. Colorectal cancers were diagnosed by an experienced gastroenterologist. A fresh stool specimen was collected from each subject in a sterile labeled container. The collected specimens were tested microscopically using saline and iodine wet preparations, then stained with trichrome stain according to the manufacturer’s instruction to find the cases of B. hominis forms. The DNA of the samples was extracted and specific primer-polymerase chain reaction (PCR) was performed.

Among the colorectal cancer patients, B. hominis was found in 16 (23.9%) patients, whereas of 67 healthy participants, 6 (9%) cases were found, indicating a significant difference (P < 0.001) in the prevalence B. hominis among the participants in the case and control groups. By the multifactorial logistic regression models, agriculture activity (0.24; 95% CI: 0.075 - 0.809), as well as consumption of unwashed fruit and vegetables (0.136; 95% CI: 0.040 - 0.459), were significantly related to the prevalence of B. homonis infection. All 22 positive samples (16 patients and 6 (9%) healthy people) were also positive by PCR method, indicating the presence of B. hominis and accuracy of microscopic examination, extraction, and PCR reaction.

Cancer is one of the leading causes of death in the world. Based on the WHO reports, 7.6 million deaths (about 13% of all deaths) were recorded in 2008 due to cancer (1). More than 70% of all cancer deaths occurred in low-income or middle-income countries. Furthermore, given the growing worldwide risk of cancer, it is expected that 11 million deaths will occur due to cancer in 2030 (1). The literature review has reported that colorectal cancer is also the third most frequent cancer in men and the second most common cancer in women around the world (2). The reasons for an increased incidence of colorectal cancers can be justified in either real or false (3). A real change in the incidence of colon cancer can be due to a number of risk factors of the disease, including the change in “westernized” regime, standards of living, and absence of healthcare organization. On the other hand, false change in incidence may be due to improved methods of collecting information about cancer (3). In recent years, infection has been considered one of the most important causes of cancer through different pathways; therefore, about 1.9 million cases of cancer with infectious origin were estimated in 2002 (4, 5).

Nowadays it has been proven that one of the most important causes of cancer is microbial pathogens such as Helicobacter pylori, Human papillomavirus, Hepatitis B and C viruses, Epstein-Barr virus, human immunodeficiency virus (HIV), and herpesvirus (6). However, other pathogens such as parasites can also be a cause of cancer. Among the helminthic parasites, common trematodes such as Schistosoma hematobium can cause bladder cancer, and some of the liver and bile duct trematodes, including Opisthorchis viverrini and Clonorchis sinensis, are sometimes associated with cholangiocarcinoma. In addition, in recent years, the relationship between Trichomonas vaginalis parasite and cervical cancer has been proven (6-8).

Blastocystis hominis is well-known as one of the most frequent intestinal protozoan parasites in humans and animals (9). In developed countries, the prevalence of this parasite is varying between 0.5% - 23%. This high rate of blastocystosis in developing countries can be related to deprived hygiene, non-compliance with personal health, and contact with animals (10-12). The clinical signs in blastocystosis are common symptoms such as abdominal pain, diarrhea, nausea, vomiting, and flatulence. Previous researches established that Blastocystis sp. facilitate cancer cell growth through detecting the cytopathic result, cellular immunomodulation, and apoptotic responses of B. hominis, particularly in malignancy (13).

The protocol of this investigation was reviewed and approved by the Ethics Committee of Lorestan University of Medical Sciences, Khorramabad, Iran. However, all participants were provided with written informed consent before the study.

The present descriptive case-control study was performed on 67 patients with colorectal cancers attending the general hospitals Lorestan Province, Western Iran from October 2017 until August 2018. Colorectal cancers were diagnosed by an experienced gastroenterologist. Healthy individuals (67 subjects) without existing or previous gastrointestinal manifestations, referring to hospitals during the above period for routine examination or accompanying with other patients, were included in the control group. The exclusion criteria were patients who were unwilling to sign written informed consent, patients who had viral/bacterial infections causing colorectal cancers, patients who had taken systemic antibiotics in the last three months, as well as immunocompromised patients.

All demographic and possible risk factors, such as age, gender, and education, residence, unwashed vegetable/fruit consumption, handwashing, and agriculture activity, were collected by an applied questionnaire from all of the studied subjects.

3.4. Collection and Processing of Samples

A fresh stool specimen was collected from each subject in a sterile labeled container. The collected stool samples were then transferred to the Parasitology Laboratory of Faculty of Allied Medicine, Lorestan University of Medical Sciences, Khorramabad, Iran for microscopic examinations. A small portion of each collected stool was tested microscopically using saline and iodine wet preparations. Moreover, a part of polyvinyl alcohol (PVA)-preserved fecal sample was stained with trichrome stain according to the manufacturer’s instruction. In addition, a portion of the samples was stored at -20°C for DNA extraction. The samples were examined under a light microscope for B. hominis forms (14).

Polymerase chain reaction (PCR) was carried out to determine the presence of Blastocystis spp. by means of the specific primers with similar sequences according to the previous studies (15-17).

The statistical analysis of the results was done using SPSS 24.0 software (SPSS Inc., Chicago, IL, USA). Numerical statistics were displayed as mean ± SD. Variables that were significantly related to B. hominis prevalence were analyzed as possible risk factors by means of univariate logistic regression. P < 0.05 was measured to be statistically significant.

Table 1. Demographic Characteristics and Prevalence of B. hominis Among the Participants in Both Tested Groups

4.2. Prevalence of B. hominis Infection

A significant relationship was observed between handwashing and the prevalence of B. hominis (P = 0.007). The results demonstrated that the prevalence B. hominis among the participants who did not wash their hands before eating was significantly higher (P = 0.005) than the participants who washed their hands before eating (P = 0.46).

Table 2. Logistic Regression Analysis of the Potential Factors Associated with the Prevalence of B. hominis Among the Tested Groups

All 22 positive samples (16 patients and 6 (9%) healthy people) were also positive by PCR method, indicating the presence of Blastocystis and accuracy of microscopic examination, extraction and PCR reaction.

Cancers are defined by uncontrolled development of atypical cells, which can affect and damage nearby tissues. In recent years, the worldwide rate of cancer was reported nearly 14.1 million new cases and 8.2 million related deaths (15). Nowadays, it has been proven that among the most common cancers, liver, stomach, colorectal, and esophagus cancers are frequently related to a number of infectious diseases (15, 18). A number of microbial pathogens, including H. pylori, HBV, HCV, O. viverrini, C. sinensis, S. haematobium, HPV, EBV, human T-cell lymphotropic virus type, human herpesvirus type 8, and HIV-1 are considered group 1 carcinogens (6, 7, 19).

The present investigation aimed to determine the prevalence of Blastocytosis infection in patients with colorectal cancer and healthy individuals. The findings herein revealed B. hominis was found in 16 (23.9%) patients out of 67 patients with colorectal cancers (case group), whereas B. hominis were found in 6 (9%) participants out of 67 healthy participants in the control group, indicating a significant difference (P < 0.001) in the prevalence B. hominis among the participants in the case and control groups.

Considering the correlation between the Blastocystis and cancers, Kumarasamy et al. (13) demonstrated that Blastocystis sp. play a key role in increasing azoxymethane (a potent carcinogen)-induced carcinogenesis through harm to the epithelium of the intestine and stimulating oxidative destruction in infected rats with Blastocystis sp. Chandramathi et al. (17) also reported that although some antigens derived from Blastocystis can destroy peripheral blood mononuclear cells, they can trigger the proliferation of human colorectal cells.

On the other hand, Chan et al. (21) revealed that a number of antigens of Blastocystis sp. isolated from symptomatic patients can promote the proliferation of colorectal cancer cells in comparison to the asymptomatic individuals. In a study conducted by Ajjampur and Tan (22), it has been proven the negative effects of Blastocystis sp. on the epithelial cells of the intestine through apoptosis as well as degradation and destruction of proteins. Oxidative stress is considered a vital act in the body but if it persists for a long time it can cause a lot of pathophysiological disorders leading to some diseases such as cancers (23). Recently, Chandramathi et al. (24) showed that oxidative stress is increased in patients with cancer infected with intestinal parasites such as Blastocystis sp.

The authors are thankful to the staff of general hospitals of Lorestan Province, Iran for helping us collect the stool samples.