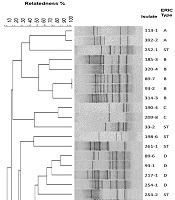 It was intended to identify the environmental source of A. baumannii strains to control future infections and ongoing outbreaks.

The mean number of Gram-negative bacilli colony per sample was significantly higher in moist surfaces (1.9 ± 2.37) than in dry surfaces and medical equipment (P < 0.05). Among 32 A. baumannii isolates, 17 (53.1%) were classified as CRAB, 13 (40.6%) as multidrug resistant (MDR) and six (18.8%) as extremely drug resistant (XDR) phenotypes. The isolates showed the most susceptibility to tigecycline (81.3%) and doxycycline (81.3%). Totally, 10 isolates (31.3%) carried blaOXA-23 and one isolate carried blaOXA-58, but none contained blaOXA-24. Typing of the strains provided seven single types (ST) and nine clusters (A-I). Two isolates in cluster B (different surfaces of H4) and two in cluster I (from ventilators of H3 and H1) were designated as common type (CT). In H4 and H1, different isolates belonging to different clusters were recovered from bed sheet and baby sink bath, respectively.

Clonally-related blaOXA-23 positive CRABs occurred in the environment, especially on moist surfaces of hospitals. The distribution of the same clones in different hospitals may point to expansion of a specific clone which increases the risk of cross-colonization of vulnerable patients.

It has long been known that Gram-negative bacilli (GNB) are associated with sustaining health-care associated infections (HAIs); among them, Acinetobacter baumannii (A. baumannii) is an emerging pathogen of human HAIs, with increasing morbidity and mortality worldwide (1). Hospital-acquired A. baumannii infections are typically manifested as ventilator-associated pneumonia, meningitis, bacteremia, urinary tract infections, and surgical wound infections (2).

Carbapenems have lost their efficacy against A. baumannii nosocomial infections due to increasing administration during the last years (3, 4). Growing prevalence of carbapenem-resistant and multidrug resistant A. baumannii is a major risk in care facilities. This resistance is often associated with acquisition of class D β-lactamases including OXA-type carbapenemases (OTC) such as blaOXA-58, blaOXA-24, blaOXA-143 and blaOXA-23 genes (5). Metallo β-lactamases (MBLs) and carbapenemases of Ambler class A also play important roles in this regard (6). Several pieces of evidence around the world have shown dissemination of OTC-harboring A. baumannii strains within and between hospitals (6, 7).

The two characteristics of multidrug resistance development and survival in the hospital environment have provoked A. baumannii to emerge as a successful opportunistic nosocomial pathogen (8). The hospital surface may represent as a reservoir for A. baumannii clones which easily circulate in both environmental and clinical settings. Identification of the source or reservoir of A. baumannii strains is a key factor to control future infections and ongoing outbreaks.

In the current report, we evaluated the distribution of carbapenem resistant A. baumannii isolates in the environmental surfaces of five hospitals in central Iran.

3.2. Identification and Culture of the Isolates

The standard phenol-chloroform extraction procedure was followed for genomic DNA extraction (11). A multiplex PCR was used to detect blaOXA-58, blaOXA-24, and blaOXA-23 genes in A. baumannii isolates, as described previously (12). A. baumannii reference strains NCTC 13304, NCTC 13302, and NCTC 13305 were used as positive control for blaOXA-23, blaOXA-24, and blaOXA-58 genes, respectively. The sequencing result was submitted to the GenBank database under the accession number JQ409995.1.

The primer pair ERIC1 (5′-ATGTAAGCTCCTGGGGATTCAC-3′) and ERIC2 (5′-AAGTAAGTGACTGGGGTGAGC-3′) were used to amplify intervening fragments of ERIC in the genomic DNA. Amplification reactions were performed in a final volume of 25 μL. Each reaction contained 2.5 μL of 10 × PCR ViBuffer, 800 μM dNTP mixture (CinnaGen, Iran), 2.5 U MaxTaq DNA polymerase enzyme (Vivantis Technologies Sdn. Bhd., Malaysia), 0.6 μM of each primer, 4000 μM MgCl2, 3 μL DNA template, and ddH2O up to 25 μL. Amplification reactions were carried out with initial denaturation (5 minutes at 95°C), followed by 35 cycles of denaturation (1 minutes at 94°C), annealing (1  minutes at 37.5°C) and extension (3  minutes at 72°C), with a final extension at 72°C for 5  minutes. Clonal relatedness of the strains was analyzed from scanned images of the agarose gel pictures using the GelCompar II software (Applied Maths, Belgium) with the band matching coefficient of Dice. The isolates were clustered using the unweighted pair-group method with arithmetic mean and displayed in dendrogram forms.

SPSS version 22 (SPSS Inc., Chicago, IL) was used for statistical analyses of the studied parameters. The mean values between the groups were compared using an Independent sample t-test, and P < 0.05 were considered statistically significant.

Totally, 396 swab samples were collected from surfaces and medical equipment of the five hospitals, and 1205 colonies of bacteria including 194 non-duplicate GNB were isolated (Table 1).

Table 1. Distribution of Isolated Bacteria in the Different Hospitals in Relation to Environmental Specimens Typing of the A. baumannii strains by ERIC-PCR provided two to 10 bands of amplification with a range of 160 to 1600 bp sizes in electrophoresis. With similarity level of at least 50%, seven single types (STs) and nine clusters (A - I) were classified. The most prevalent ERIC-PCR genotype was cluster B (15.6%). Isolates with similarity level of 100% were classified as common type (CT). In cluster B, two isolates of 89-7 and 93 - 2 in H4 were CT, which were recovered from bed sheet and portable X-ray, respectively. Moreover, in cluster I, two isolates of 127 - 1 and 383 - 1 from different hospitals (H3 and H1) were designated as CT, and were both recovered from ventilator. Further, in cluster A, two isolates of 113 - 1 and 392 - 2 from different hospitals (H4 and H1) had at least 90% similarities, and were recovered from light switch and safety box, respectively.

The multiplex PCR assay for OTC genes showed that 10 of the 32 A. baumannii isolates (31.3%) carried blaOXA-23, one isolate carried blaOXA-58, and none contained blaOXA-24. All blaOXA-23 gene positive isolates showed CRAB MDR/XDR phenotype.

There are limited reports about the investigation of A. baumannii in the hospital environment from Iran and other countries of the region (13-16). We screened surfaces and equipment of five hospitals and observed a high frequency (53.1%) of CRAB isolates which were simultaneously resistant to some tested antimicrobial agents. Previously, the high distribution of XDR A. baumannii in clinical isolates was reported in hospitals of Tehran, central Iran (7, 17). Based on the present results, tigecycline exhibited promising in vitro activity against A. baumannii isolates. This finding is in agreement with previous works, showing the highest susceptibility of A. baumannii clinical isolates to tigecyclin (18). Therefore, this antibiotic might be regarded as a treatment option for infections due to MDR/XDR A. baumannii (19, 20).

CRAB isolates were also detected on devices often used for patient care such as portable X-ray and also on surfaces touched by staff and patients. A. baumannii might first spread from infected patients or colonized personnel/visitors and then contaminate surfaces, thereby acting as prolonged sources for HAIs. Several studies suggested that A. baumannii could colonize different medical equipment and surfaces (11, 21, 22) and also could persist for years in patients (23) with the ability of biofilm formation (11). In the present study, we observed a significant MDR (21.9%) and XDR (18.8%) frequency. The XDR rate in this study was lower than the usual reported rates of clinical A. baumannii isolates, as it reached more than 90% in one report from Tehran (7). However, the MDR rate in this study was higher than reported rates of clinical isolates.

The ERIC-PCR result revealed at least four distinct clusters of A. baumannii in ICUs of all the hospitals except for H2 which showed two STs. In this study, some A. baumannii isolates with similar typing pattern were recovered from the different hospitals, indicating that clonal expansion of certain strains might take place in some of the hospitals probably through shared visitors or patients. Despite the clonal relatedness of these strains, the presence of the blaOXA-23 gene was not demonstrated for these isolates, and the resistance profiles of 127 - 1 and 383 - 1 were not identical. This discrepancy might be explained to some extent by the potential of A. baumannii to acquire foreign resistance elements as a result of selective pressure forced with antibiotics in patients and/or with antiseptics in the healthcare environment (24, 25).

A notable issue is the detection of two isolates in one clone from two geographically distinct hospitals, which were both obtained from ventilator. This suggests the possible potential of some specific genotypes of A. baumannii to resist and overcome hospital conditions, leading to inter-hospital dissemination of the same clones. Ventilator associated pneumonia due to MDR A. baumannii is one of the most common nosocomial infections, which accounts for high mortality rate in ICU hospitalized patients (26).

In different regions of Iran, OXA type β-lactamases have been widely studied in clinical isolates of A. baumannii (17, 28, 29) and it has been shown that blaOXA-23 is the most frequent OTC gene among nosocomial A. baumannii isolates (17, 30-33). However, data on the distribution of blaOXA-23 in the environmental isolates of A. baumannii is uncommon. While in this study, 31.3% of the isolates had blaOXA-23, a recent study from Iran reported that 77.5% of 40 strains isolated from air, water and surfaces carried blaOXA-23 (34). Similarly, other studies suggested higher frequency of 68.7% (15), 58% (20) and 43.3% (27) for blaOXA-23 gene positive isolates in the hospital environment, as compared to the present results. The stability and circulation of blaOXA-23 producing isolates may finally result in acquisition and horizontal transferring of genes to other strains.

We detected one blaOXA-58 positive isolate. The first known blaOXA-58 producing Acinetobacter isolate was recovered in France in 2003. The co-occurrence of blaOXA-23 and blaOXA-58 in clinical isolates has been reported occasionally (30, 35-38). There is evidence supporting the presence of blaOXA-58 carbapenemase in outbreak strains of A. baumannii and its contribution in CRAB outbreaks occurring in hospitals (38-41).

This study provides evidence of the presence of clonally related blaOXA-23 producing CRAB in the hospital environment, particularly on moist surfaces in ICUs of tertiary hospitals. The clinical significance of multi resistant A. baumannii is of great concern since the distribution of the same clones in different hospitals on equipment such as ventilator may increase the risk of cross-colonization of vulnerable patients. Moreover, a combination of multi-drug resistance and blaOXA-23 and/or blaOXA-58 may result in sustained surveillance of such isolates in the healthcare environment and their involvement in outbreaks.

We would like to thank the staff of the Cellular and Molecular Research Center, Qom University of Medical Sciences, for their kind help during the experiments.