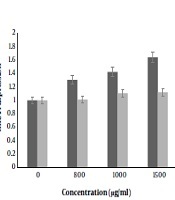 Nisin is a potent bacteriocin produced by Lactococcus lactis subsp. lactis and anti bacterial peptide. Colorectal cancer (CRC) is considered as one of the most prevalent and mortal cancers throughout the world. Genetic variations and environmental factors are responsible for initiation and development of cancer. Regulation of the apoptosis process plays an important role in the development of crc. bax, bcl2, caspase 3, 6, 8 and 9 genes are involved in induction of apoptosis.

The SW480 cells were treated with concentrations of nisin at different doses and different incubation times. The cytotoxic effects of nisin were studied using MTT assay. Expression levels of bax, bcl2, caspase 3, 6, 8 and 9 genes were determined by real-time PCR technique.

Our results confirm that nisin induces mitochondrial dependent apoptosis by up regulation of caspase genes expressions. The results of this study contribute to the use of nisin as a suggested therapeutic factor to reduce the progression of colon cancer.

The third most common cancer in the world is colorectal cancer (CRC), one of the most common causes of death worldwide, and the process is very complex (1, 2). Colorectal cancer has mortality rates that vary around the world (3). Most colorectal cancers are owing to lifestyle attributes and old age, with only a small number of cases due to genetic disturbance (4). Recently research had led to development of agents that specifically inhibit tumor growth. Documents also support the view that the colonic microflora are involved in the progress of CRC (5-7). One of the practical treatments against infectious diseases and cancer are cationic antimicrobial peptides (CAPs) that have become a considerable interest (8). Studies have shown that the outer membranes of cancer cells compared to normal cells contain molecules with higher negative charge, such as glycosaminoglycans, glycoproteins and phosphatidylserines (9). The CAPs, due to their amphipathic and cationic properties, may bind to cancer cells by electrostatic influence, resulting in the cytotoxicity of cancer cells (10, 11). Among CAPs, nisin is the only one approved by FDA. Nisin is a polycyclic antibacterial peptide, which is produced by Lactococcus lactis. Nisin is not toxic for human consumption. Bacteriocins such as nisin have recently been used to inhibit the growth of cancer cells or induction of cancer cells apoptosis (7, 12). Apoptosis is a type of cell death that results in the loss of cells without the release of harmful substances into the environment. According to the latest research, apoptosis involves two major external and intrinsic pathways (13). Activation of death receptors and then caspase 8 and executive caspases are via external pathways. Moreover, caspase 9 initiates the intrinsic pathway and then executive caspases are activated. Executive caspases activation (caspase 6, 3) is followed by activation of primary caspases (caspase 9 or caspase 8) (14, 15). We now describe the impact of nisin on the colorectal cancer cell line in the expression of caspase 8 as the initiator of the external pathway and caspase 9 as the initiator of the internal pathway and that caspase 3 and caspase 6, are effector caspases that execute apoptosis.

In the present study, our aim was to evaluate nisin in the pathway of apoptosis and the expression levels of distinct caspases in colorectal cancer cell line.

Cells (5000 cells per mL) were placed in 96 well microplates and then incubated at 37°C for 24 h. After a 24 h incubation, media with 100 μL of fresh medium containing various concentrations of nisin (Sigma-Aldrich, Germany) including (0, 50, 100, 200, 400, 600, 800, 1000, 1200 and 1500 μg/mL) were replaced for 24 and 48 hours at 37°C. After each incubation period, the cells with phosphate buffered saline (PBS) were washed and then 10 microliters of 5 mg/mL MTT [3-(4,5 dimethyl ethiazol-2-yl) 2,5 diphenyl tetrazolium bromide] (Sigma, Germany) was added to each well in 96 well plates. Incubation of the microplates continued for another 2 hours. By adding 100 μL of dimethyl sulfoxide (DMSO) (Sigma-Aldrich, Germany) to each well, the blue formazan crystals were dissolved and then slowly shaked for 10 minutes. Using the ELISA plate reader, the optical density was measured at 570 nm. All concentrations were examined three times. A similar study using nisin at concentrations of (0 - 1500 μg /mL) on NIH3T3 cells (embryonic fibroblast mouse) was also performed concurrently.

For RNA extraction, SW480 cells (500,000 cells per well) were placed in 6 well plates and incubated for 24 h. Afterwards, cells were treated with nisin (0, 800, 1000 and 1500 μg/mL) for 24 h and 48 h. The RNA extraction was carried out by kit (Parstous, Iran) according to the producer’s instructions. The purity and concentration of RNA was determined using spectroscopy (NanoDrop, DE, Wilmington). For checking the quality of each isolated mRNA electrophoresis on 1.5% gel agarose was performed.

In order to investigate the effects of nisin on the expression levels of caspase 3, caspase 6, caspase 8, caspase 9, bax and bcl2 genes in the colon cancer cell line, one microgram of RNA was used by cDNA Synthesis kit (Biofact, South Korea) according to the producer’s protocol.

The results of current study were expressed as mean ± SD in the triplicate experiment. Differences were determined by SPSS V.18. One way ANOVA comparison test at significant difference of P < 0.05 was also performed.

4.1. The Effects of Nisin on Cell Viability

obtained in this study have demonstrated that nisin down-regulated cell viability in SW480 cells, in a dose-dependent manner. The statistical analysis of MTT assay confirmed that the proliferative function of SW480 cells was remarkably inhibited by nisin. Our results showed that the growth rate of SW480 cells treated with nisin was decreased when compared to cells with nisin untreated cells. Since treatment with 800, 1000, 1200 and 1500 μg/mL nisin had a significant decrease in cell viability compared to the control group (P < 0.05), a dose dependent effect of nisin on cell viability was shown. Among all experiments, cells which were incubated for 24 h with 1500 μg/mL nisin showed maximum effect anti proliferation. Nisin was not toxic to NIH3T3 cells up to 800 μg/mL and concentrations 1000, 1200 and 1500 μg/mL revealed very low cytotoxicity effects on cultured NIH3T3 fibroblasts of cancer cell line (P > 0.05).

The real time PCR method was used to determine mRNA expression levels of caspase 9, caspase 8, caspase 6, caspase 3, bax and bcl2 genes at 24 h and 48 h after treatment with concentrations of nisin (0, 800, 1000 and 1500 μg/mL). The results of this study indicated that the mRNA expression level of bax, caspase 3 and caspase 9 genes increased significantly after 24 h compared to 48 h (P < 0.05) and the upregulation exhibited nisin dose dependent pattern (P < 0.05) (Figure 1). However, nisin increased relative bax/bcl2 mRNA expression in SW480 cells in a dose dependent manner. Also, after cells were treated with nisin, the gene expression of caspases 6, 8 didn’t show any significant increase after 24 h and 48 h incubation (P > 0.05). Fold changes in mRNA expression levels of targeted genes after two time point treatments were shown in Table 1. In the present research, the effect of nisin on human colon cancer cell line investigated. The amount of IC50 obtained in this study was about 250 μM (for 1200 μg/mL of nisin). We found a dose dependent effect of nisin on reducing proliferation of this cell line. Complimentary to this study, nisin was not toxic to mouse fetal fibroblast cell line (NIH3T3) up to 800 μg/mL, suggesting nisin may not kill normal cells or have not significant lethal effect on normal cells than cancerous cells at tested concentrations. Paiva and colleagues showed that in studies, the IC50 of nisin for HepG2 (hepatocellular carcinoma cell line) and MCF7 (breast cancer cell line) was reported 112.25 μM and 105.46 respectively, which is lower than our findings (17). In a recent study by Ahmadi and coworkers, IC50 of nisin for SW480 cell line, was approximately 600 μM which is more than our findings; while in that study, normal cells were not used (18). In a study by Begde et al., IC50 of nisin for Jurkat cell line was 225 μM (19). Maher and McClean showed that 115 μM nisin had a toxic effect on the Caco-2 (colon cancer cell line). Also, they showed that 89.9 μM nisin had a toxic effect on the HT29 (colorectal cancer cell line) (20).

Different results in IC50 of nisin, indicate that the effect of nisin on different cells is different and that normal cells should be used in experiments. Metabolites of nisin and lactobacillus species have been shown to stimulate apoptosis against cancerous cells. This occurs through the interference of probiotics and their secretions, containing bacteriocins (21). In this study we have used the human colon cancer cell line (SW480) to study the effect of probiotic nisin on expression of apoptotic related genes (caspases 3,6, 8, 9, bcl2 and bax). The bax/bcl2 expression ratio determines the susceptibility of colon cancer cell line to apoptosis and can effect on cancer progression (22, 23). In the external and internal pathways of apoptosis, caspase 3 is an executive caspase. Caspase 9 and caspase 8 are initiator caspases in intrinsic and extrinsic pathway respectively (24). In the apoptosis pathway induced by cytochrome c, caspase 6 is an activator of caspase 8 (25). Our findings showed that nisin can increase bax/bcl2 expression ratio in a dose dependent manner. Based on previous researches, ratio of bax/bcl2 is considered as a marker for response to cancer prognosis and cancer aggression (18, 26, 27). In the current study, nisin upregulated caspase 3 and 9 genes expression (P < 0.05) and could prevent the growth of SW480 cells. This implies that the apoptotic pathway triggered by bax/bcl2 related caspase 3 activation may be involved in the presence of apoptosis in CRC.

Caspase 3, an important cellular marker of apoptosis, was associated with decreased bcl2/bax expression as well as activation and a significant increase in caspase 9 expression, which supports induction of mitochondrial apoptosis pathway by nisin. Also, after cells were treated with nisin, caspase 6, 8 gene expression was slightly increased, which was not significant (P > 0.05), indicating that nisin-induced apoptosis could not be via the extrinsic pathway.

In contrast, in another study, nisin ZP induced apoptosis even in the highest dose tested, 800 IU/mL and activates caspase 8, but had no effect on caspase 3 in head and neck squamous cell carcinoma (28). Similar to our study, there are no report of a significant increase in caspase 6 by nisin. A notable finding of the present study was that nisin can induce the intrinsic apoptosis pathway via increased expression of caspase 3, 9 genes in CRC, in contrast to the Kamarajan et al. study (28). Also, nisin has no significant lethal effect on NIH3T3 at the concentrations tested.

In conclusion, these results demonstrate the role of different gene expression levels in apoptosis pathways in the treatment of colorectal cancer cell line by nisin and also indicates that increased caspase 3 and caspase 9 expression and ratio bax/bcl2 play an important role in the sensitivity of SW480 cells to nisin. However, more valid studies are needed to confirm these findings.

This article has been extracted from a thesis. The authors would like to appreciate all colleagues of the department of microbiology for their laboratory cooperation.