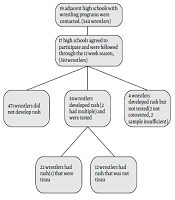 Transmittable skin infections in sport are a concern, especially for wrestlers. Current methods for limiting tinea gladiatorum transmission in United States high school wrestling include a required skin inspection protocol. Tinea prevalence before and after the skin inspection protocol was instituted is not widely known. We prospectively determined tinea prevalence among a Minnesota high school wrestler cohort over their 12-week season and compared this to point-in-time incidences reported in wrestlers not subject to a skin inspection protocol. Wrestlers having a suspicious rash at the skin inspection (raised, red, > 5 mm diameter, and with dry flaky scale) were recruited. Among suspicious rashes, tinea gladiatorum infection was determined using direct microscopy with chlorazol black staining. Thirty-eight of 510 wrestlers (7%) developed a rash suspicious for tinea. Thirty-four wrestlers that had rash(s) were enrolled and their rash was tested. Twenty-two of 510 wrestlers developed tinea gladiatorum throughout the season. Tinea gladiatorum prevalence was 4.3% (95% CI 2.5-6.1%). Four wrestlers with rash were not available for testing (unable to obtain timely consent (two) or obtain adequate sample(two)). Prevalence was less than suggested by the incidences previously reported in wrestling populations.

Dermatophytosis is a contagious skin infection. Among wrestlers it is spread primarily through skin to skin contact and is termed “Tinea gladiatorum” (1, 2). Current methods for limiting tinea transmission in United States high school wrestling include a required skin inspection protocol prior to wrestling competition. Tinea gladiatorum prevalence prior to routine skin inspection being conducted is unclear. Published reports include a 24% incidence among Pennsylvania high school wrestlers (3) surveyed at one point in time. Similarly 24% of the wrestlers had tinea gladiatorum at a wrestling club in Iran (4). In 2002 Kohl et. al. reported on “tinea gladiatorum: Pennsylvania’s experience” and recommended a “prospective analysis” be conducted to better define tinea prevalence and prevention intervention effectiveness (1).

Ashack et. al. retrospectively analyzed data from the National High School Sports-Related Injury Surveillance Study, 2009/2010 through 2013/2014 (5). Tinea gladiatorum prevalence can be calculated at 0.7% among wrestlers. However, skin inspection for wrestlers was not uniform across the school assigned to surveillance each year. Athletes in multiple other sports (boys basketball and football) also developed tinea infections, at lower rates than wrestlers. The authors concluded “(required skin inspection) could reduce infection rates in high school athletics if applied broadly (6).

Since 2009, Minnesota high school wrestlers have undergone a skin inspection protocol prior to Minnesota State High School League (MSHSL) competition. The protocol was developed by the National Federation of High Schools (5). The protocol states that wrestlers found to have a rash at skin inspections be withheld from competition until they present the MSHSL Skin Condition Report which indicates that the rash is either non-contagious or has received adequate treatment.

Prospectively determine tinea gladiatorum prevalence among a Minnesota high school wrestling cohort. The cohort is geographically defined and followed over the 12-week season. Tinea prevalence observed is compared to the tinea incidence reported prior to the initiation of the required skin inspection protocol.

In the fall of 2017, the investigator emailed coaches and administration from nineteen adjacent high schools in the St. Paul and surrounding area. Information on the study was disclosed. Seventeen of the nineteen high schools agreed to participate. Permission to conduct the study was obtained through each school district. The study protocol conforms to the ethical guidelines of the 1975 Declaration of Helsinki. The study was approved by the University of Minnesota IRB #STUDY00001578.

During the wrestling season (November 20th, 2017 – February 11th, 2018), wrestlers underwent the MSHSL required skin inspection prior to each competition. Competitions occurred 1-2 times per week. Inspections followed the protocol established by the National Federation of High Schools (5). The head wrestling coach contacted the principal investigator when a wrestler with a rash suspicious for tinea (raised, red, > 5 mm diameter, and with dry flaky scale) was identified at the inspection.

Direct microscopy was selected for tinea diagnosis because of it's high sensitivity (7). The rashes' leading edge was gently scraped with a #15 blade to obtain a keratinocyte sample. The sample was fixed on a glass microscope slide. Chlorazol black stain, which combines chlorazol black E (stains tinea elements green), potassium hydroxide (breaks down non-tinea keratin and cells) and dimethylsulfoxide (accelerates the process), was applied. The slides were read by a board certified Dermatopathogist for the presence (positive result) or absence (negative result) of tinea gladiatorum.

During the season, 38 of the 510 wrestlers (7%) had identified at skin inspection a rash that met inclusion criteria and were reported to the Investigator. Consent was able to be obtained from 34 wrestlers and their rashes were tested. We were unable to obtain timely consent from two wrestlers. We were unable to obtain timely adequate samples from two wrestlers. A total of four wrestlers with rash were not tested. Figure 1 details participant screening, enrollment and results. 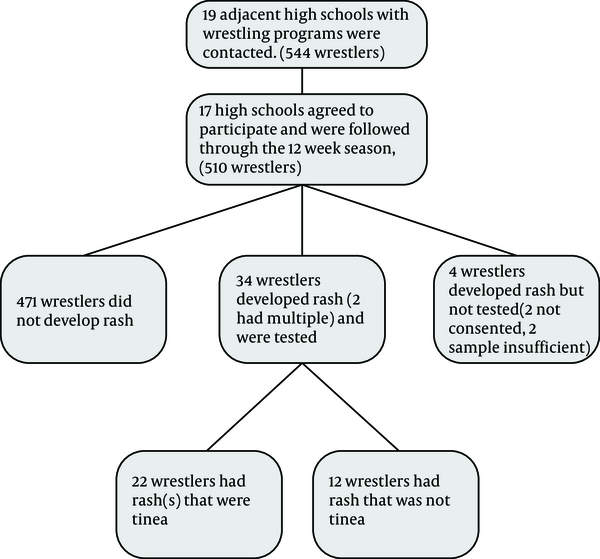 Two consented wrestlers developed another rash at new sites during the season. A total of 36 rashes were tested. Twenty-three (64%) were direct microscopy positive for tinea. Table 1 details rashes that developed at the seventeen high schools and direct microscopy results.

Prior tinea gladiatorum studies surveyed the incidence of rash at one point in time. We prospectively observed a population of wrestlers over time. The overall prevalence of rash over the twelve-week season was less than expected based on published studies of an Iranian wrestling club and wrestlers at a Pennsylvania high school. Both these groups were evaluated at places and times that did not include a skin inspection protocol which removed wrestlers with rash from competition.

The lower 4.3% prevalence we found compared with previously reported 24% incidence may be explained by the effectiveness of the required skin inspection prior to each competition protocol. Other factors may include the geographical location of Minnesota (cold, lower humidity winters). Prevalence can vary depending on geographical region (7).

Thirty-six percent of the rashes that were visually suspicious for tinea were direct microscopy negative. Nummular eczema, pityriasis roseola, granuloma annulare and other conditions can mimic tinea. Confirmatory testing is important for accurate diagnosis.

Study limitations include the previously reported incidences of 24% wrestlers having tinea gladiatorum were likely surveyed during an outbreak. Seven percent of the high school wrestlers in the geographical region we followed competed on the two high schools that were not monitored. Also four wrestlers being monitored developed rashes that were not tested. Assuming all four rashes were tinea, the highest prevalence would have been 26 out 510 wrestlers (5.0%) developing tinea. Hygiene elements like wrestling mat sanitization, skin wipes, washing by wrestlers, and pretreatment with barrier foam prior to exposure are felt to be important preventative methods. These were assumed to be fairly uniform throughout our study population.