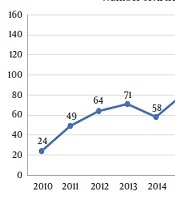 There have been numerous articles about the anterior cruciate ligament (ACL). But there has been no specific article describing ACL in Asian countries.

This study aims to provide the publications about ACL in Asian countries in the last 10 years.

There has been an increase in the ACL publications among Asian authors over the past 10 years with the high impact journal publishers. This article demonstrates the increased interest in the ACL topic and could be used as a basis for future studies.

There have been numerous researches about the anterior cruciate ligament (ACL). The ACL is discussed among knee surgeons because it is the most common injured of the knee ligaments (1). Researchers have attempted to provide the evidence in diagnosis, treatment, prevention, prognosis, and rehabilitation techniques in ACL injured patient (2, 3). The increase in ACL studies has been caused by the development of ACL reconstruction equipment, cadaver dissection tools, and imaging modalities (4).

The publications trends about this ligament have increased by year around the world. There have been 2 studies about systematic reviews in the ACL scope (2, 5), but there still no publication that provides all data about ACL publications, especially in Asian countries. Organizing information in an effective way mandates the use of the best evidence for decision making in ACL care holistically.

Not only in America and Europe, but also in Asia is developing the treatment and diagnosis of ACL injury, and also all about the ACL itself.

This study wants to provide the publication about ACL in Asian countries in the last 10 years.

We searched in PubMed, EMBASE, and Cochrane Library using the keywords “ACL” OR “Anterior Cruciate Ligament” AND “injury” OR “tear” OR “rupture”. We added English full text and 10 years publications in the filter searching engine. The search resulted in a total of 55.702 articles from 2009 until 2019. We included the articles that discussed the anterior cruciate ligament and at least one author with the affiliation country in Asia. All original articles, including molecular study, laboratory study, animal study, cadaveric study, imaging study, clinical study, systematic review, review article, and other studies that were published between January 1st, 2010 until December 31st, 2019, were included. We excluded the book sections, conference presentations, guidelines, commentaries, or personal reviews. The PRISMA guidelines for conducting the review were followed (Figure 1) (6). 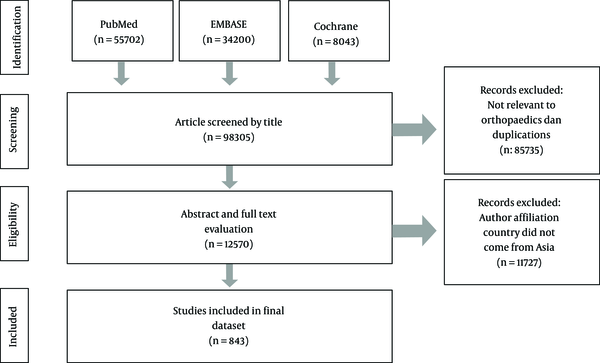 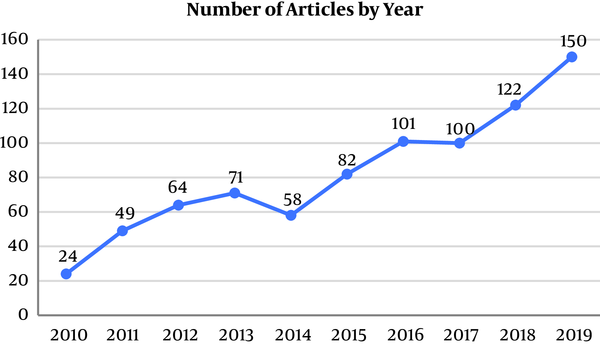 Top 10 journals with the highest number of publications 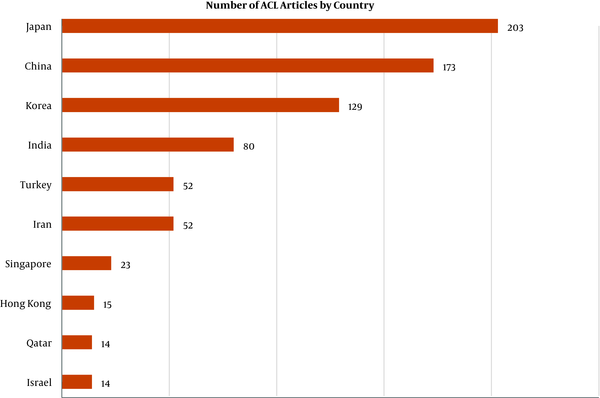 Number of ACL articles by country

The most important findings from this systematic review were that most of the Asian authors published their research in high impact factor journals. It proved that Asian authors have good quality of research protocol. It can be motivated by raising the international ranking of the university or educational center. Asian authors have wanted to document and make their work accessible for other surgeons around the world. Most of the articles were published in the Q1 journal (57.0%) according to the grading by www.scimagojr.com also proved that the quality of Asian author research was excellent.

The number of journals increase in the ACL field is associated with the development of new methods in ACL reconstruction. There are still many things to explore in ACL itself, such as in histological features, biomechanics, animal studies, cadaveric studies (4), as well as imaging studies.

Articles with the highest citation number were clinical research with the title: “likelihood of ACL graft rupture: not meeting six clinical discharge criteria before return to sport is associated with a four times greater risk of rupture” with 212 citations. Systematic reviews by Kambhampati and Vaishya showed that: “Knee Injury and Osteoarthritis Outcome Score (KOOS): development of a Self-administered Outcome Measure” has the highest citation number with 1456 times (2). A study by Vielgut et al. showed that: “rating systems in the evaluation of knee ligament injuries” has the highest citation number with 1624 times (17). Clinical research was dominating in this systematic review. It may be because the background of most Asian authors is an orthopedic surgeon. In this review, there were 297 articles with the number of citations more than 10 times. It indicates the novelty of the study. Thus the other researcher cited the article.

Japan was the country with the highest number of published articles. It indicates that the development of technology, awareness to update the new and more effective methods of diagnosis, treatment, and rehabilitation programs of the researcher were good. The countries with a small number of published articles did not indicate that they did not have a research protocol. It signifies that whether they had published the article in an unindexed journal publisher or they had data to write a manuscript, but they did not have time to write because of the high load of patients to be operated. A study by Kambhampati and Vaishya showed that the United States is the biggest country with the highest number of ACL publications, with 10356 articles (2).

This study indicates the need for collaboration in research in the region. In order to bridge the ACL research gap among Asian countries, international collaborations with guidance from more established research centers should be encouraged. The study by Wu et al. revealed that the collaboration between low-income countries and middle-income countries has a higher level of evidence and a more prospective controlled design of study (18).

The limitations of his systematic review are that it only focuses on studies performed in the Asia region. Many researchers in Asian countries may have contributed data to an overseas-based research project or participated in research when they resided overseas. This exclusion is to depict a clearer picture of local research output and quality.

There has been an increase in the ACL publications among Asian authors over the past 10 years with high impact journal publishers. This article demonstrates the increased interest in the ACL topic and could be used as a basis for future study.