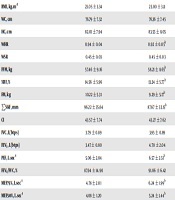 Studies have demonstrated that young adults, especially in low- to middle-income countries, are increasingly susceptible to unfavorable alterations in body composition during their transition from adolescence to adulthood. This places young adults at an increased risk for numerous chronic diseases, such as cardiovascular, and/or pulmonary diseases.

This study aimed to determine if concurrent aerobic and resistance calisthenic training could reduce cardiopulmonary disease risk in young adults in a low resource setting.

The findings support the feasibility and efficacy of a simple and inexpensive concurrent aerobic and resistance training program to simultaneously improve body composition and lung function in an attempt to curb the increasing incidence of overweight/obesity and associated lung dysfunction in young adults in a low resource setting.

Overweightness and obesity are grave global public health issues, especially in developing countries like South Africa (1, 2). Studies have demonstrated that young adults are increasingly susceptible to unfavorable alterations in body composition during their transition from adolescence to adulthood (3). This specific grouping is at its peak vulnerability to unfavorable alterations in body composition once becoming fully independent of their parental support due to a decrease in physical activity and exercise, irregular eating patterns, and/or an increased participation in social festivities (3).

This is problematic in that overweightness/obesity places individuals at an increased risk for numerous chronic diseases, such as cardiovascular (CVD) and pulmonary diseases (4, 5), and accounts for the ever-increasing prevalence of CVD (6) and pulmonary diseases (7) in young adults. The imperative of overweightness/obesity reduction has further been highlighted with the recent novel coronavirus COVID-19 pandemic, which has demonstrated that CVD, diabetes, chronic respiratory disease, hypertension, and cancer, in descending order (and all likely consequences of overweightness/obesity) (8), were the primary contributors to COVID-19 mortality (9, 10).

Further, little/no recommendations exist on how to exercise for health promotion or primary prevention could be delivered in low-resource settings (17). This is a necessity given that formalized exercise is only available in approximately one-tenth of low-income countries and one-quarter of medium-income countries (17). A multitude of reasons exist for the lack of formalized exercise in low-resource settings and may be related to a lack of guidelines on how exercise can be implemented in low-resource settings and a lack of randomized controlled trials of exercise in low- to middle-income countries (18, 19). The need for evidence-based, low-cost, and low-resource calisthenic multimodal/concurrent program designs are further necessitated by the COVID-19 pandemic global lockdowns where substantial proportions of the globe’s population were confined to their homes without access to external or costly equipment and/or facilities.

This study aimed to determine if concurrent aerobic and resistance calisthenic training could reduce cardiopulmonary disease risk in young adults in a low resource setting.

Thirty young adult males aged 18 - 29 years (20) at risk for being overweight were randomly assigned to either a six-week concurrent aerobic and resistance training group (CON) (n = 15; mean age: 21.79 ± 1.63 years) or a non-exercising control group (NON) (n = 15; mean age: 20.38 ± 1.76 years) from a low-resource setting with limited funds to cover health care costs, access to medication, equipment, supplies, and devices in central Johannesburg, South Africa. Inclusion criteria required that participants be sedentary, weight stable, and on no dietary intervention six months prior to the study. Participants were also required not to be using any nutritional or pharmacological agents that could have influenced the tested variables. Any participants self-reporting that they did not meet these criteria were excluded from participation in the study. Exclusion criteria included any relative or absolute contraindications to exercise which could have prevented them from completing the testing and/or exercise protocol (21). Prior to participation in the study, all volunteers gave written informed consent and underwent a screening history and physical examination and were allowed to discontinue the study at any time. The study was approved by the Institutional Review Board at the University of Johannesburg, South Africa (code: AEC01-81-2014). All participants underwent an identical battery of tests before and after the six-week intervention period. All participants were evaluated in the post-absorptive state following a 9 - 12 hour overnight fast and at least 48 hours prior to or following any exercise.

The spirometric measurements were performed with the participants standing upright with a nose clip attached. Spirometric testing was done in accordance with guidelines set by the American Thoracic Society and the Eur-Respiratory Society (ATS/ERS). A mouthpiece was inserted into the turbine sensor by at least 0.5 cm and then placed at least two centimeters into the subject’s mouth. When performing the forced vital capacity (FVC) test, each participant was required to inspire maximally and expire as rapidly as possible into the spirometer. Forced vital capacity (FVC) (liters (L)), forced expired volume in one second (FEV1) (L), forced expiratory volume in one second/forced vital capacity ratio (FEV1/FVC) (%), peak expiratory flow (PEF) (L), maximal expiratory flow at 75% (MEF75%) (liters per second (ℓ.sec-1)), maximal expiratory flow at 50% (MEF50%) (L.sec-1), maximal expiratory flow at 25 (MEF25%) (L.sec-1) were measured following standard recommendations (25) before and after the six-week experimental period and at least 48 hours after the last training session using a Cosmed® FX System spirometer (Pavona di Albano, Rome) which was calibrated as per Cosmed® FX System requirements prior to each test. Each test was performed at least three times, with each test not differing by more than 5% or 100 milliliters. The largest value obtained from the three executions was utilized in the final analysis.

While the participants in NON were required to remain inactive throughout the six-week experimental period, the CON participants participated in three, non-consecutive 60-minute (min) exercise sessions weekly. All sessions commenced with each participant completing a five-minute warm-up consisting of running at a heart rate under 100 beats per minute, followed by stretching for 20 sec (26, 27).

Statistical analyses were performed using the Statistical Package for the Social Sciences (SPSS) version 25.0 for Windows (SPSS-25) (IBM Corporation, Armonk, NY). Statistical analysis consisted of basic statistics to determine baseline and post-training means and standard deviations (SD). Levene’s test was utilized to determine the homo- or heterogeneity of the measured variables at pre-test, while t-tests were utilized to determine if a significant change occurred within groups from pre- to post-test and between groups. A confidence level of P ≤ 0.05 was considered statistically significant.

To be included in the final analyses, CON group participants were required to attend at least 85% of the exercise sessions. Of the 30 males initially recruited for participation in this study, two NON participants failed to attend the post-testing and were not included in the final analyses. No significant adverse events occurred in association with the tests or interventions.

aValues are presented as means ± SD.

The purpose of this study was to determine if concurrent and aerobic resistance calisthenic training could reduce cardiopulmonary disease risk in young adults in a low resource setting. In this regard, this study demonstrated that a six-week concurrent aerobic and resistance training program resulted in significant improvements in WHR, FFM, %BF, FM, ƩSKF, PEF, MEF75%, MEF50% and MEF25%.

These findings of improvements in body composition, even in apparently healthy adult males are key in that the increase in the global mortality rate can be attributed to the worldwide obesity epidemic (29). Due to the novelty of this study, only the study of Shaw et al. (14) has demonstrated that concurrent training has a positive influence on body composition, albeit in sedentary, apparently healthy males and using conventional, equipment-based resistance training. While the data on improvements in body composition in non-overweight/obese participants is limited, previous studies using concurrent training in overweight/obese participants have demonstrated improvements in body composition (30), and specifically in FFM, FM, and %BF (31). The study of Ho et al. (31) also reported changes in BM and BMI, which is contradictory to the lack of changes found in the present study. While the study did not demonstrate improvements in BM and BMI, it is essential to note that BMI and BM are indirect measurements of body fatness and should be used with caution in individuals engaging in resistance training since the resultant hypertrophy commonly results in an increase in FFM (as observed in this study) which results in an increase or unchanging BMI and/or BM (14). This increase in FFM occurs from the increased anabolic functions of the muscles, which result from the resistance training program, but not aerobic training (32, 33).

To date, there has been limited/no studies examining the effect of concurrent training, nevertheless calisthenic training, on lung function, especially in non-diseased populations. While not yet investigated completely, the present study aimed to investigate the effect of calisthenic concurrent training in an attempt to simultaneously limit the further expansion of not only overweightness/obesity but also the associated lung dysfunction. This study demonstrated improvements in four of the seven measured variables (PEF, MEF75%, MEF50%, and MEF25%). Interestingly, no improvements were found in FVC, FEV1, and FVC/FEV1, which are considered effort-dependent (36). While a meta-analysis of previous research has revealed that concurrent training does improve lung function in general (37), previous research studying the effects of concurrent training in sedentary males on lung function has proved useful with concurrent training leading to positive changes in PEF, IVC, FEF25%, and FVC and FEV1/FVC, but not FEV1 (36). The failure of the present study’s concurrent program to increase FVC, FEV1, and FVC/FEV1 could indicate that this mode of training does not result in an increased inspiratory force via a trained, elongated, and mechanically advantageous diaphragm (38).

Due to the small sample, results should not be universally directed to all sedentary young adults. In addition, the study did not utilize females due to differences in gender hormones, and these findings should not be generalized to the female populace. This is because corresponding increases in FFM and FM following exercise training may be lower than in males, indicating a biased dose-response relationship between genders (39), possibly due to gender differences in exercise responses and gender-specific adaptations to exercise (40). Further, it is unclear whether a longer intervention period would result in additional positive improvements in the more obstinate kinathropometric measures, such as BMI.

Studies have demonstrated that young adults are increasingly susceptible to developing overweightness/obesity, which itself is associated with an increased risk of developing a variety of health conditions, including respiratory dysfunction (4, 5). This study demonstrated that concurrent training facilitates multiple improvements not only in body composition but also lung function. Therefore, calisthenic concurrent training can be used to curb the increasing incidence of overweight/obesity and associated lung dysfunction in young adults, even in low resource settings.

The authors would like to thank the Department of Sport, and Movement Studies, University of Johannesburg South Africa for the use of its laboratory and the Non-Communicable Disease Intervention Research Unit (NCDIRU) for its assistance on this study.