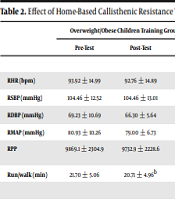 Childhood overweightness/obesity is likely to further challenge worldwide public health if effective preventative measures, such as physical activity interventions, are not put in place as prescribed by public health organizations, such as the World Health Organisation (WHO).

This study attempted to determine and compare the efficacy of home-based callisthenic resistance training on cardiovascular disease (CVD) risk in overweight children compared to normal-weight children.

This study demonstrated that home-based callisthenic resistance training can have positive impacts on overall body composition and may prove to be a cost-effective and essential tool in the fight against childhood overweight/obesity whether in normal weight or even overweight/obese children.

Over the past twenty years, the global population has experienced a significant increase in the rate of overweightness and obesity, resulting in a worldwide obesity epidemic (1). This epidemic has resulted from the consistent overconsumption of high-calorie diets and high rates of physical inactivity (2). Due to these decreases in physical activity and increases in food/calorie consumption, a concomitant increased prevalence of overweight/obesity in children has been found with the prevalence of overweightness/obesity doubling between 1976 and increasing by a further 13% in 1994 and an additional 15.5% in the year 2000 (3). There are various risks associated with overweightness/obesity in children, including risks such as neurological, orthopaedic, pulmonary, and endocrine conditions. Children's self-esteem, body image, and economic mobility are also negatively affected as they age. Additional complications involve the development of non-communicable diseases (NCDs) and the persistence of childhood overweightness/obesity into adulthood (4). Thus, childhood overweightness/obesity is likely to challenge worldwide public health if the current problems are not addressed (4, 5).

Reversing this troubling trend may mean addressing the energy surplus in the home where children are likely to feel the most comfortable (11, 12). For this reason, it is believed that interventions should target the overweight and obese children in their home environment, where they can partake in a training program without the need for an array of expensive and bulky equipment (13, 14). This maintenance and restoration of health and independence in the overweight/obese population in a cost-effective manner and is especially important in developing countries, such as South Africa, where there is limited transport or funds for transport (14). Further, there may be an increased need for home-based training since, when compared to a gymnasium, home-based training adds an element of privacy, which is a major concern for most overweight and obese individuals (14). In this regard, callisthenic training is a form of dynamic exercise consisting of a variety of simple, often rhythmical, movements generally using minimal equipment or apparatus. These exercises are intended to increase muscular strength and flexibility with movement such as bending, jumping, swinging, twisting, or kicking using only the individual’s body weight for resistance (14).

This study attempted to determine and compare the efficacy of home-based callisthenic resistance training on CVD risk in overweight compared to normal-weight children.

A sample of 15 previously sedentary overweight/obese children (OOC) (boys ≥ 22% body fat (%BF); girls ≥ 27% BF) and 15 previously sedentary normal-weight children (NWC), aged 9 - 11 years were assigned to a six-week home-based callisthenic resistance training program, while an additional 15 previously sedentary normal-weight children were assigned to a non-exercising control group (NON). For six months before the study, the participants were required to be weight stable and not participate in any structured exercise, not be on any dietary interventions of supplementation, and have no absolute and/or relative contraindications to testing/training (15). Prior to participation in the study, all participants and their parents/guardians gave assent and written informed consent, respectively. Ethical clearance to conduct the study was obtained from the relevant Institutional Review Board (REC-01-194-2015).

The participants were also expected to participate in a 1.6 km walk/run test on a level field. Upon completion of this distance, the participants’ time was recorded and used in the final analysis (15).

Participants in the OOC and NWC groups were required to participate in a six-week, three times weekly, home-based callisthenic resistance training program (20, 21), for approximately 45 minutes. The children in the CON group were instructed to maintain their usual daily activities and not engage in any structured physical activity. Participants in the training groups were required to complete a 5min warm-up consisting of light jogging on the spot followed by six callisthenic exercises (Table 1), after which they were required to complete 10min of stretching as a cool-down (3).

Data analysis was done using SPSS-25 (IBM Corporation, Armonk, New York). Data analysis involved the determination of means and standard deviations and t-tests to determine if any significant changes occurred pre- versus post-test within each group and to compare any changes across the various groups. A P ≤ 0.05 was considered statistically significant.

The primary objective of the present study was to evaluate and contrast the effectiveness of callisthenic resistance training performed at home on CVD risk in overweight compared to normal-weight children. This study resulted in improvements in hip circumference, sum of skinfolds in the normal-weight children. In turn, improvements were found in body mass, BMI, BF%, FM, sum of skinfolds, and cardiorespiratory endurance in the sampled overweight/obese children.

The findings of this study should not be universally directed to all sedentary and/or overweight/obese children due to the small sample. In addition, the study utilized male and female participants and improvements may prove different in a single gender population due to gender differences in exercise responses and gender-specific adaptations to exercise (9). It is further uncertain if an extended intervention duration would provide further advancements in measures, such as RHR, RBP, RPP, RMAP, and/or BMI.

The increasing incidence of childhood overweightness/obesity and concomitant CVD risk has become a worldwide public health challenge. Thankfully, it seems that home-based callisthenic resistance training can have positive impacts on overall body composition and may prove to be a cost-effective and essential tool in the fight against childhood overweightness/obesity, whether in normal weight or even overweight/obese children. The findings of the efficacy of callisthenic resistance exercise in reducing body mass, BMI, percentage body fat, fat mass, and sum of skinfolds in overweight and obese children is somewhat of a hallmark since previous research has failed to demonstrate these improvements in children (3, 29). This finding is also noteworthy since young overweight/obese children may not necessarily find exercise as enjoyable when in a group setting, where they may be subjected to harsh criticism for their poor health status, compared to the comfort of their own home where they have more privacy (14).

The authors would like to thank the Department of Sport and Movement Studies, University of Johannesburg South Africa for the use of its laboratory and the Non-Communicable Disease Intervention Research Unit (NCDIRU) for its assistance on this study.