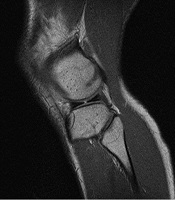 A Hospital Clinic Experience with Isolated Lateral Meniscal Tears in Sports: A Chart Review on Rugby

Rugby is a contact sport, and the frequency of injuries is high. In our clinical experience with patients diagnosed arthroscopically with lateral meniscus tears in the middle segment, rugby players are more prevalent than players of other sports. We hypothesized that a meniscus tear in the middle segment is a common injury in rugby players and is associated with specific positions in rugby.

This study aimed to describe a series of lateral meniscus tears in rugby players.

We retrospectively reviewed the medical charts of cases with an arthroscopically confirmed isolated lateral meniscus tear in the middle segment associated with rugby players in our center between 2006 and 2020. We investigated the epidemiology of injury, including the player position and phase of play, the symptoms; as well as imaging and arthroscopic findings.

Of 4452 cases (4666 knees) diagnosed arthroscopically with meniscus tears, 27 cases (28 knees) were isolated radial lateral meniscus tears in the middle segment, 26 of which were sports-associated, including 11 cases related to rugby. Among the 11 rugby players, 10 were forwards, 5 of whom were in the front row. The injury was associated with a tackle in 4 patients, while the phase of play of injury was unknown in 6 patients. In the clinical manual examination, tenderness and a positive hyperextension test had a relatively high sensitivity. In imaging examination, MRI depicted a characteristic image of a partial meniscal defect in the sagittal view. All patients underwent arthroscopic partial meniscectomy. The postoperative course was favorable. All patients returned to play rugby at the pre-injury competition level.

Rugby is a full-contact team sport played by two teams competing to bring an oval-shaped ball into the opponent's in-goal to score points. In Japan, rugby is generally played with 15 players on each side. Player positions are broadly divided into forwards and backs. Forwards compete for the ball in a scrum and require big body size and great strength, while backs advance the ball by passing, dodging, kicking, and other maneuvers and require running ability and agility.

Among patients diagnosed arthroscopically with lateral meniscus tears in the medial segment encountered in our center, we noticed that rugby players were clearly more prevalent than players of other sports. We hypothesized that a meniscus tear in the middle segment is a common injury in rugby players and is associated with a specific position in rugby.

This study aimed to describe in detail a series of lateral meniscus tears while playing rugby.

We retrospectively reviewed the medical charts of our center between January 2006 and April 2020 for cases with an arthroscopically confirmed diagnosis of a meniscus tear. Inclusion criteria were cases with isolated lateral meniscus tears involving the middle segment, and the tears were either transverse or oblique. Exclusion criteria were abnormal morphological meniscus such as discoid meniscus, and other concurrent injuries such as ligament rupture, fracture, and serious cartilage injury. Among the cases identified, we focused on those in which injury was associated with rugby activities. We investigated the epidemiology of injury, including laterality of injury, player position, and phase of play; the symptoms; as well as imaging and arthroscopic findings.

Among 4452 cases (4666 knees) of arthroscopically proven meniscus tears diagnosed in our center, 249 cases (261 knees) had an isolated lateral meniscus tear with no morphological abnormalities, including discoid meniscus and no concurrent injuries such as ligament rupture, bone fracture, and severe cartilage lesion. Of these cases, only 44 cases (46 knees) (1.0% of all knees with meniscus tears) had tears in the middle segment (Cooper classification zone E) (7).

More than half of the tears in the middle segment were radial tears, found in 27 cases (28 knees) (61.4% of tears in the middle segment, 10.8 % of all isolated lateral meniscus tears). The causes of injury were sports activities in 26 cases and age-related degeneration in the remaining case (Figure 1). Rugby was the most common sport with 11 cases (39.2%), followed by soccer and baseball with 4 cases each, and then basketball with 2 cases (Table 1). 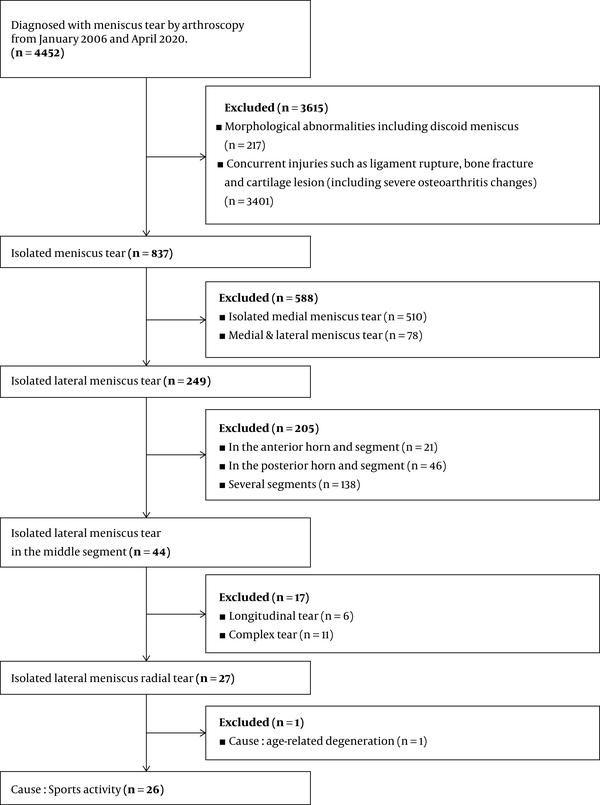 Flowchart of isolated lateral meniscus tear in the medial segment.

There was no difference in the side of injury, with 5 patients injured on the right side, and 6 patients on the left side. The experience of playing rugby ranged from 4 to 14 years, with an average of 8.3 years. All were students belonging to 15-player rugby clubs at high school or university. Nine subjects were playing at the level of national matches, and two were playing at the level of prefectural qualifying matches. Regarding player position, there were 10 forwards and 1 back; with 5 patients in the front row (hooker, prop), 2 patients in the second row (lock), 3 patients in the third row (flanker, No. 8), and 1 patient was a three-quarter back (center, wing).

When injuries were examined by phase of play, “unknown” was most common (6 patients), followed by tackle (2 patients when tackling and 2 patients when being tackled), and running (1 patient when taking off to run).

The subjective symptom was pain in the knee joint in all patients and pain localized in the lateral part of the knee in 9 patients. The swelling was observed in 1 patient and limited range of motion in 2 patients, although both were not severe. Tenderness in the lateral joint space was noted in 5 patients (45.5%). McMurray test (8) was performed in 10 patients, and 3 patients (30%) were positive. The hyperextension test (9) was performed in 10 patients, 6 of whom (60%) were positive. At presentation, Lysholm scores ranged from 48 to 69 (average 57.1 ± 5.8), VAS scores from 48 to 80 (average 59 ± 11.3), and KOOS total scores from 220 to 375.7 (average 306.7 ± 51.2). As for the status of sport activities after symptom onset, 5 patients with injury at the unknown phase of play continued to participate in the competition, and the remaining 6 patients suspended competition training, or only continued basic training (drills). 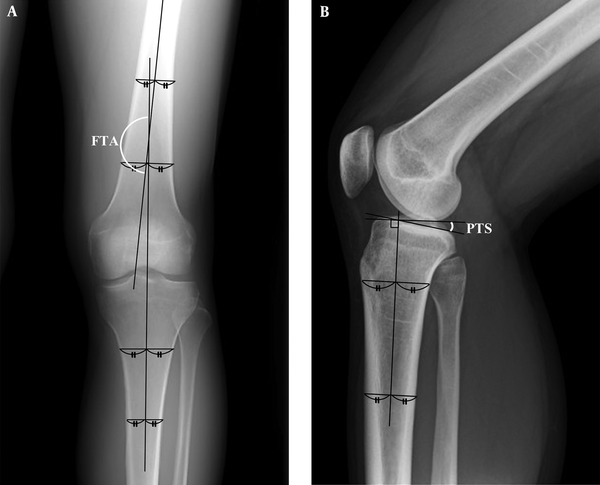 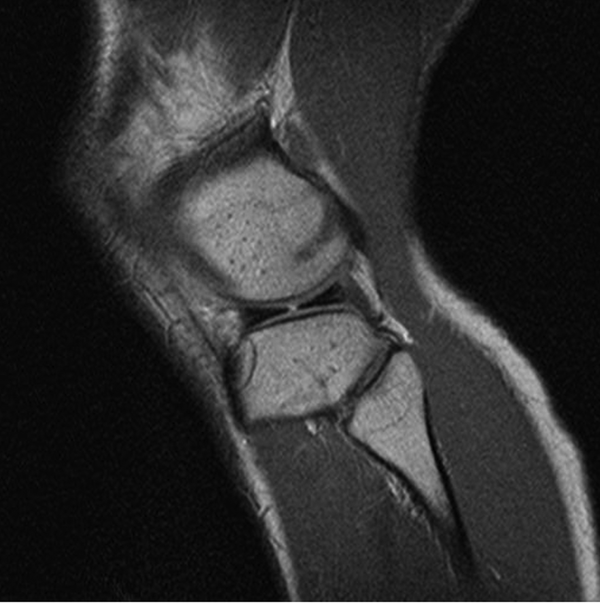 Knee arthroscopic finding: A, Transverse tear; B, Oblique tear progressing toward the direction of posterior segment. Tears are observed in the middle segment of the lateral meniscus.

The time from injury to arthroscopic examination/surgery was 5 - 16 (average 9) weeks in patients injured during tackle, 1 week in the patient injured when running, and 6 - 56 (average 21) weeks in patients injured at unknown phase of play. Arthroscopic findings showed no cases with a tear in the vascular zone corresponding to Cooper classification E-0 or E-1. Therefore, partial meniscectomy was performed in all patients (6, 10). Full weight-bearing was permitted 10 days after the operation, light exercise at jogging level was permitted at 8 weeks, and return to competition at 12 weeks. The treatment outcome at the final postoperative follow-up [follow-up period 6 - 13 (average 9.5 ± 2.9) months] was as follows: Lysholm scores 84 - 100 (average 94.8 ± 6), VAS scores 0 - 10 (average 5.3 ± 4.7), and KOOS total scores 461.4 - 500 (average 481.3 ± 12.1). All patients returned to playing rugby with no subjective symptoms.

In rugby, since the physique and the role of the player differ depending on the position, the site and frequency of injury also vary (15). McIntosh has shown that the injury rate of forwards is higher than that of backs, and the frequencies of injury during tackles and scrums are high (20). Of the 11 rugby players who had a lateral meniscus tear in the middle segment in the present study, 10 players were forwards. Among them, those playing in the front row, which is the foremost position of the scrum, accounted for one-half of the injured cases (5 cases). Although some cases were injured during tackles, the number of cases injured at the unknown phase of play was the highest. Although there is a possibility that injury is caused by a direct external force during tackles and repeated side steps and sudden stops, the injury rates of backs and third-row players are too low to support this possibility. Considering the specialized maneuvers of front-row players, the meniscus tear may be related to repeated scrums in rugby.

The average force generated in a scrum is 3370 - 6210 N, and the peak compression force during engagement reaches 8000 - 16500 N (21-23). A large proportion of this force is exerted on the front row, with an average of 3290 N (22). Under these circumstances, the compression force on the meniscus is already enormous. In addition, the knee joint position during scrum tends to be in valgus position, and the lateral joint space is narrowed, further increasing the load on the lateral meniscus. The angle of the knee joint at the time of scrum push is 130° - 155°. A study using 14 cadaver knees has shown that at 150° knee flexion, the contact pressure is the highest near the middle segment of the lateral meniscus (24, 25). These findings support the deterioration and injury of the middle segment of the lateral meniscus by the repeated push maneuvers during the scrum. Moreover, the meniscus, which is compressed under high pressure in the scrum, is pulled backward by the lateral condyle of the femur through knee extension during push, which may increase the risk of oblique tear toward the direction of the posterior segment.

For isolated lateral meniscus tears in the middle segment, the main complaint is pain near the injured site, but swelling and limited range of motion are either absent, or even if present, are mild and do not manifest severe subjective symptoms. For diagnosis of this injury, detection of tenderness and a positive hyperextension test in the clinical manual examination are relatively sensitive. In imaging examination, characteristic findings suggesting this injury are frequently observed in the sagittal view of MRI.

If this injury is left undiagnosed or untreated, there is a risk that the tear may progress and induce osteoarthritis, with the possibility that patients may not be able to continue rugby activities. Since the tears occur mostly in the avascular zone, conservative therapy is unlikely to improve the injury, and surgical therapy is considered to be the first treatment option. In general, the minimally invasive arthroscopic partial meniscectomy is selected (26). In recent years, surgical repair aiming at preserving the meniscus has been actively attempted, but the healing rate is reported to be 61%, which cannot be considered effective (10).

For rugby players in the forward position, especially in the front row, the above manual examinations are useful for clinical screening. If a lateral meniscus tear in the medial segment is suspected, it is important to confirm the injury early by MRI and arthroscopic examination, and proceed with appropriate treatment. Further studies are required to analyze the pathology of this injury as one of the harmful effects caused by rugby, as well as to develop preventive training programs and improve the scrum technique.