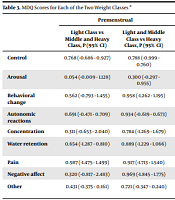 Menstrual cycle and menstrual symptoms can affect the physical, mental and exercise performance of female athletes.

This study aimed to determine the associated symptoms of premenstrual, menstrual, and postmenstrual periods in female judo athletes by weight class.

Understanding the changes in mental and physical conditions caused by menstruation is important for female athletes, and an increasing number of studies have examined the impact of the menstrual cycle on athletic performance (1). A recent review reported a decrease in performance during the early follicular phase (2). Davies et al. reported that muscle strength, an objective measure of performance, is lower in the menstrual phase than in the follicular or luteal phases 3. On the contrary, it has also been reported that aerobic capacity and muscle strength are not related to the menstrual cycle, and no unified view has been obtained (3).

Previous studies have shown that female athletes who play weight-restricted sports, such as long-distance track and field athletes, gymnasts, or lightweight athletes in weight-class competitions, have higher rates of menstrual irregularities (6). Excessive weight loss and physical activity are known to affect menstruation through lack of available energy, mental and physical stress, loss of weight and body fat, and hormonal changes (6). Although frequent weight loss and high levels of anxiety have been reported in female judo athletes, particularly senior athletes (7), little is known on the psychological symptoms associated with menstruation in judo athletes who lose weight. Since judo, like aesthetic sports, often involves weight restriction in the preparation for competition, the circumstances of menstruation-related symptoms need to be clarified.

This study aimed to clarify the diffences of menstruation-associated symptoms in female judo athletes by weight class.

Table 1. Baseline Physical Characteristics of the Participants a

aMeans were compared using one-way ANOVA for the main effect of trial followed by a Bonferroni test.

The subjects responded to a self-administered questionnaire consisting of their profile, judo practices, lifestyle, and a questionnaire survey on menstrual-associated symptoms. The profile included age, height, weight, body mass index (BMI), and age at menarche. The items under judo practice status were as follows: Judo history, rank, weight dropped when losing weight, frequency of judo practice, and duration of practice session. Lifestyle habits were investigated in terms of sleeping hours and the frequency of eating breakfast on weekdays and holidays. For the Menstrual Distress Questionnaire (MDQ), we used the 46-item questionnaire of the modified MDQ, which was developed by Moos (8) and translated into Japanese by Akiyama et al. in 1979 (9).

Data were subjected to statistical analysis by calculating the mean and the standard deviation. One-way analysis of variance (ANOVA) was conducted for the participants’ profiles, judo practice, lifestyle, and total MDQ scores by class. The subscales of the MDQ were subjected to one-way ANOVA for each of the three weight classes. Where significant effects were found, the values were subsequently analyzed with post hoc analysis for multiple comparisons using the Bonferroni method. In addition, comparisons between the lightweight and medium/heavyweight classes and between the light/mediumweight class and the heavyweight class were examined using an unpaired t-test. The effect size for the ANOVA was calculated as η2 and the effect size for the t-test was calculated as 95% CI. Significance levels were set at 5% and less. All statistical analyses were performed using the SPSS Statistics version 25 statistical analysis software (IBM Corporation, Armonk NY, USA), and the statistical significance was set at P < 0.05.

4.2. Comparison of MDQ Scores Between the Three Weight Classes

Table 2. MDQ Scores Between the Three Weight Classes a

aMeans were compared using one-factor ANOVA for the main effect of trial followed by a Bonferroni test.

4.3. Comparison of MDQ Scores Between Light Weight vs. Medium and Heavyweight Classes

Table 3. MDQ Scores for Each of the Two Weight Classes a

The purpose of this study was to clarify the differences in menstruation-associated symptoms by weight class among female judo athletes. The results showed that postmenstrual autonomic nervous system dysfunction, decreased concentration, and water retention were higher in the lightweight class compared with the medium and heavyweight classes. The concentration of female ovarian hormones (estrogen, progesterone) changes continuously throughout the menstrual cycle, and it has been shown that the ratio of estrogen to progesterone has a variety of effects on the body (10). Although many studies have shown that the condition of female athletes is worse before and during menstruation (11, 12), the present study is the first to demonstrate that postmenstrual recovery of menstruation-related symptoms is suppressed in lightweight female athletes in classified sports. These results will contribute to supporting the condition of female judo athletes in accordance with the menstrual cycle.

The results of the present study show that the autonomic nervous system, water retention, and concentration were not recovered in the lightweight class during the postmenstrual period. Previous studies have reported that weight loss can affect autonomic nervous system (18) and mental abilities such as lack of concentration (19). Water deprivation is often used as a method of weight loss in combat sports athletes (20). The endocrine hormones aldosterone and antidiuretic hormone regulate osmolarity through the retention of electrolytes and body fluids (21). The loss of body water by rapid weight loss might reduce the ability of hormones to maintain homeostasis.

There are several strengths of the present study. First, this study examined premenstrual, menstrual, and postmenstrual MDQ scores in female judo athletes by weight class. Although judo athletes of all ranks trained for the same amount of time and the same amount of weight, postmenstrual symptoms were more severe in lightweight than in medium and heavyweight female judo athletes, which represent an essential finding in the condition of female athletes. Second, we examined the physical symptoms of menstruation in female judo athletes who have a relatively high BMI. Although menstrual irregularities have been reported to occur in underweight athletes such as gymnasts and long-distance track and field athletes (22), our study showed that menstrual symptoms also occur in women with a BMI of 25 or more, such as female judo athletes. However, the study also has some limitations. The first is the small number of participants, especially in the heavyweight class. The small number of participants in the heavyweight class compared with the medium and lightweight classes may have affected the statistical results. Second, the study examined the MDQ scores of premenstrual, menstrual, and postmenstrual by weight class; however, physical parameters such as body fat and skeletal muscle mass were not measured. Thus, the influence of physical parameters cannot be discussed as a reason for the differences in MDQ scores among weight classes. Future studies are needed to examine menstrual symptoms and physical parameters in female judo athletes at the same time to determine the reasons for the association between weight class and menstrual symptoms. Third, the accuracy of the MDQ has been widely discussed, especially the validity of the translated version across different cultures and types of symptoms by ethnicity (23). Therefore, future research should include not only the MDQ but also a wide range of surveys on menstrual symptoms. Finally, future studies should also evaluate menstrual-associated symptoms in female judo athletes from the perspective of energy availability. Since low available energy due to excessive dietary restriction has been associated with amenorrhea and osteoporosis, future studies should also examine the energy availability as a cause of menstrual-associated symptoms (24).

This study showed that lightweight female judo athletes reported worse autonomic dysreflexia, concentration difficulties, and water retention after menstruation compared with medium and heavyweight female judo athletes. Therefore, the approach to menstrual symptoms is necessary for different ranks in martial arts sports such as judo, as well as for aesthetic and lighter weight female athletes, which have been studied in the previous studies.

Copyright © 2022, Author(s). This is an open-access article distributed under the terms of the Creative Commons Attribution-NonCommercial 4.0 International License (http://creativecommons.org/licenses/by-nc/4.0/) which permits copy and redistribute the material just in noncommercial usages, provided the original work is properly cited.
download pdf 143.34 KB Get Permission (article level) Import into EndNote Import into BibTex
Number of Comments: 0