Do Skiers with Similar Race Time but Different Age Pace Similarly in a Cross-Country Ski Marathon? 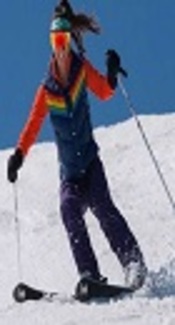 Pacing strategies have mainly been investigated for runners, but little is known for cross-country skiers. We investigated the pacing strategies in 105,565 female and male age group athletes competing between 1998 and 2016 in the ‘Engadin Ski Marathon’. This race is the largest cross-country skiing marathon held in Europe covering the exact distance of a marathon. Split times are taken at the time stations 10 km (A), 20 km (B) and 35 km (C). We hypothesized to find a difference in pacing between younger and older athletes with similar race times. We calculated three percentage changes of speed, Change A (100 × (split2 - split1)/split1), Change B (100 × (split3 - split2)/split2) and Change C (100 × (split4 - split3)/split3). The men-to-women ratio was lower in the slower performance groups. In both women and men, the faster groups were more prevalent in the younger age groups and the slower groups in the older age groups; only the < 2 hours group increased speed in Change A. A non-linear variation of change in speed was observed across performance groups in Change B and C. The differences in variation of pacing by performance groups among age groups were trivial. In summary, the findings did not confirm our hypothesis that skiers of different age with similar race time would pace differently. Therefore, sex and performance, not age, should be the main criteria for coaches and skiers in order to optimize the pacing strategy in a cross-country skiing marathon.

The pacing strategy during an endurance event can have a significant impact on performance. Six different pacing strategies, such as negative, all-out, positive, even, parabolic-shaped and variable pacing, have been described (1). Generally, during endurance events, well trained athletes tend to adopt a positive pacing strategy, where the athlete progressively slows after peak speed is reached (1).

Performance in cross-country skiing has been shown to be influenced by a series of physiological, psychological, technical and tactical characteristics, including pacing. In addition, pacing of performance groups has usually been examined by considering quartiles of performance (19, 29). Although the use of quartiles allowed the assignment of an equal number of participants in each performance group, it might be of limited practical value for coaches and athletes, because the cut-off points of groups did make sense from a statistical point of view but not from a sport perspective. Coaches and athletes might be more interested to know the pacing of a specific ‘race time’ group, i.e. what was the pacing strategy of athletes achieving a specific race time.

All procedures used in the study were approved by the institutional review board of Kanton St. Gallen, Switzerland, with a waiver of the requirement for informed consent of the participants since the study involved the analysis of publicly available data.

The ‘Engadin Ski Marathon’ is an annually held cross-country ski race in Switzerland, Europe that takes place on the second Sunday of March in the upper Engadin valley between Maloja and S-chanf. The race started in 1969, has been a part of the Worldloppet, and is one of the major cross-country skiing events in the Alps in Europe. Between 11,000 and 13,000 skiers participate annually in ‘Engadin Ski Marathon’. Since 1998, the total distance covered is 42 km. In that year, the race was extended by 2 km to match the distance of a full marathon. The ‘Engadin Ski Marathon’ is a freestyle race, but there are separate tracks for skiers practicing classic style for all but the narrowest parts of the race. Participation is open to anyone from the age of 16 years. In Silvaplana (10 km, 1,790 m above sea level), Pontresina (20 km, 1,805 m above sea level) and La Punt-Chamues-ch (35 km, 1,687 m above sea level), split times are taken at the time stations.

All athletes who finished the ‘Engadin Ski Marathon’ between 1998 and 2016 were considered. Data with name, age and sex of the athletes were obtained from the publicly available race website of the ‘Engadin Skin Marathon’ at www.engadin-skimarathon.ch. Before 1998, data were not recorded electronically. The initial sample was 105,587 participants, classified in 5-year age groups. Twenty-two participants with missing split times were excluded from further analysis, resulting in a final sample of 105,565 participants.

In addition, to study differences in speed and change of speed by sex, age group, performance group and split, we used a mixed-effects regression model with participants as random variables, whereas sex, performance group and age group were assigned as fixed variables. In addition, we examined interaction effects between these fixed variables. Akaike information criterion (AIC) was used to select the final model. Alpha level was set at 0.05. 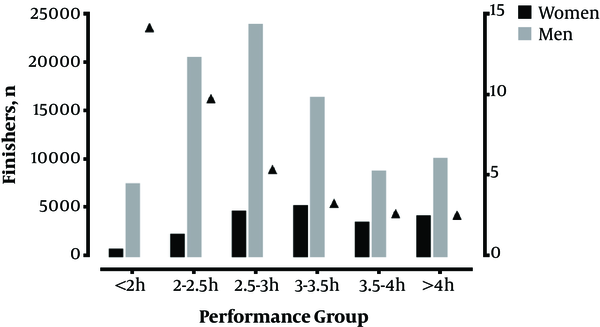 Figure 3. Distribution of performance groups by age group in women (A) and men (B) 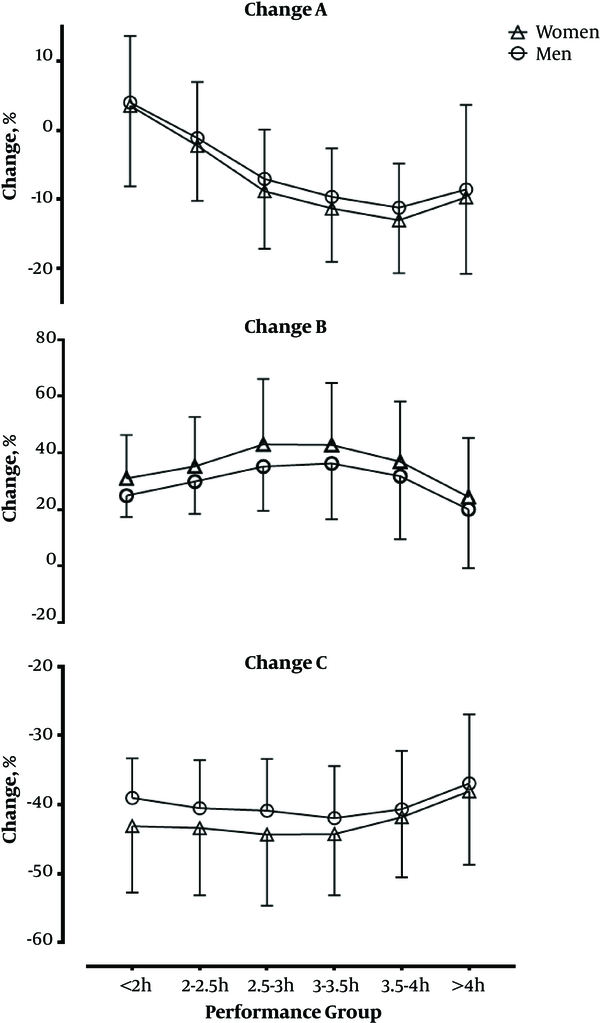 Figure 4. Change of speed from split 1 to 2 (change A), from split 2 to 3 (change B) and from split 3 to 4 (change C) by sex and performance group. Error bars represented standard deviations.
Table 1. Mixed-Effects Regression Analysis 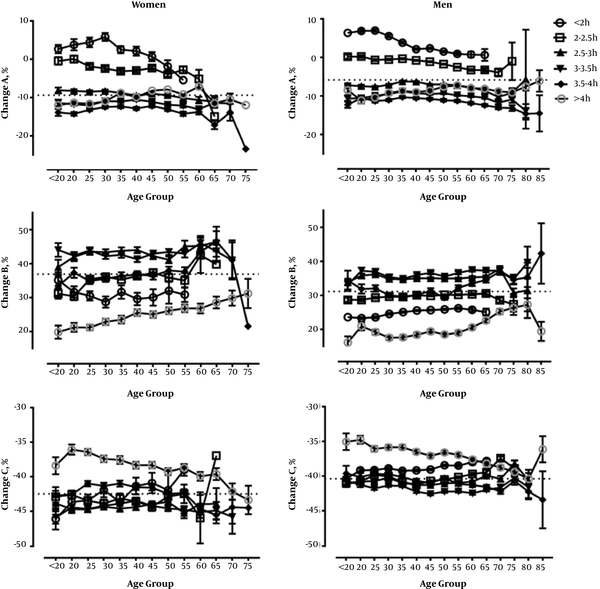 The first main finding was that there was an imbalance in the distribution of sex among performance groups, e.g. the men-to-women ratio was close to 14 in the < 2 hours performance group and close to 2.5 in the > 4 hours performance group. This observation should be attributed to the sex difference in performance in cross-country skiing, according to which men were faster than women. In turn, the faster race time in men might reflect physiological and anthropometric differences compared to women, such as their higher maximal oxygen uptake (VO2max) (31, 32), muscle power and body mass (33). It should be highlighted that VO2max was a parameter that could discriminate cross-country skiers into medallists and non-medallists in Olympic games and world championships (34). Also, lean mass was related to performance of cross-country skiers (35).

With regards to the larger magnitude of performance group × age group association in men than in women, this observation should be attributed partially to sex differences in the correlation of performance to their changes with aging. For instance, in male adolescent skiers, skiing performance was related to strength and power parameters, whereas in female skiers it was related to aerobic capacity (38). Also, it has been shown that women relied less on anaerobic metabolism than men (39).

4.1. The Fastest Increased Speed in the First Part of the Race

The overall pattern of pacing (i.e. ~6% decrease of speed in Change A, ~32% increase in Change B and ~41% decrease in change C) denoted an inverse U shape. The most striking pattern was that of athletes in the < 2 hours performance group in change A which was the only group increasing speed in this change. The pattern of pacing in the present study disagreed with a previous study in cross-country skiing which showed a positive pacing (28, 40). This discrepancy might be due to different race distance and statistical approaches in the abovementioned studies, which examined 15 km and 10 km races in men and women, respectively, and considered only the 40 fastest skiers. Another study on a small sample in skiers examined pacing during a 10 km race and found a decrease of speed during the second and third quarter of the race, which was maintained in the last quarter (41).

4.2. Variation of Change of Speed Across Performance Groups in the Last Part of the Race

Moreover, a non-linear variation of change of speed was observed across performance groups in change B and C. For instance, the fastest group seemed to have similar patterns of change of speed as the two slowest groups. However, their similarity should be due to different reasons. In the case of the fastest group this should be attributed to their relatively fast beginning and the accompanying fatigue that did not allow increasing speed in change B as much as slower groups. On the other hand, the slowest groups did not increase speed in change B as much as faster groups due their slow speed. Additionally, it might be contributed to the course profile with more ascents in the first part of the race (change A and B) but more descents in the second part of the race (change C).

4.3. Differences in Variation of Pacing by Age Groups

The findings of this study should be limited by the specific characteristics of ‘Engadin Ski Marathon’ (e.g. race distance, change of altitude), environmental conditions (temperature, humidity and wind) and our statistical approach that used all skiers with no limitation to the top athletes in age or performance group. Thus, the results should be interpreted with caution when comparing with studies on other cross-country skiing races and using a different statistical design. On the other hand, the strength was the large number (n > 100,000) of finishers examined which allowed the analysis of performance groups by age groups and the identification even of trivial differences. Moreover, profiling pacing strategies by sex, performance group and age group, had important practical applications to coaches and athletes, who could optimize their pacing according to the data corresponding to their sex-, age- and performance-specific characteristics. Based on our findings, future research should examine the differences in anthropometric and physiological characteristics in finishers with similar race time differing in age.

In summary, the findings did not confirm our hypothesis that skiers of different age groups with similar race time would pace differently. In addition, we confirmed previous findings about the effects of sex and performance on pacing. Therefore, sex and performance should be the main criteria for coaches and skiers in order to optimize their pacing strategy.