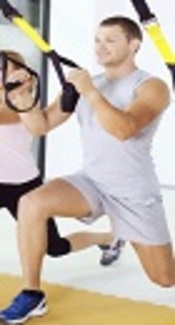 This study aimed to investigate the effect of different rest interval durations between sets during full-body resistance exercise sessions on total load lifted and blood lactate concentrations in resistance-trained individuals.

Resistance training is recognized as an effective tool for enhancing strength, power and muscular endurance (1, 2). However, the successful resistance training prescription involves a proper interaction among several acute training variables, such as choice and order of exercises, load intensity, volume, rest interval (between sets, exercises and sessions), muscle actions, velocity of contraction and frequency (1, 3).

Among these training variables, evidence has suggested that the rest interval between sets affects various acute responses including metabolic (4, 5), hormonal (6-9), cardiovascular (10-12), neuromuscular and perceived ratings of exertion (13, 14). Thus, the rest interval between sets can be considered a key variable for resistance training prescription, since it affects distinct acute responses, which in turn could modulate chronic neuromuscular adaptations (8, 15, 16).

Adequate rest interval duration between sets is necessary to restore the anaerobic alactic system and remove metabolic by-products (such as hydrogen ions, inorganic phosphate), delaying muscle fatigue and thus favouring a higher external training load during resistance exercise. In this context, previous studies indicate that shorter rest intervals result in a decrement in the number of repetitions performed during multiple sets of isolated exercises (5, 17-20).

Considering that rest interval is crucial to promote proper recovery (e.g. restore anaerobic alactic system and remove metabolic by-products), it is important to investigate its effects on metabolic responses such as blood lactate concentration. Blood capillary lactate analyses are considered a simple measure that indicate the glycolytic anaerobic system contribution and indirectly, metabolic stress. In this way, previous studies (4, 13, 24) have demonstrated no influence on blood lactate level comparing moderate rest interval between sets (ranging from 60 seconds to 240 seconds). However, limited evidence exists about the effects of very short (< 60 seconds) versus moderate rest intervals between sets on the blood lactate response.

Another important aspect that has been neglected is the influence of rest interval on total load lifted (TLL) during resistance training. The TLL represents the sum of number of sets, repetitions and external load lifted during a resistance exercise session. Evidence indicates that TLL influences muscle damage (25), hormonal (26) and muscle thickness (27) responses to resistance training. Therefore, TLL represents an important outcome beyond simply the reduction in the number of repetitions performed as commonly reported in some studies that investigate rest interval between sets (19, 28-32).

Previous data support the assumption that resistance-trained individuals can tolerate shorter rest interval lengths between sets and maintain the external training load in a better manner than untrained and novice individuals (33). Thus, it is possible that a better interaction between inter-set rest interval and TLL during full-body workouts could maximize the training stimulus for the resistance-trained, resulting in improved outcomes. Although it is not possible to extrapolate the results of an acute resistance training response to chronic neuromuscular adaptations, the knowledge of resistance exercise session characteristics (metabolic and mechanic) affected by rest interval provide insights into factors that can influence post-exercise adaptations and can thus assist strength and conditioning coaches to prescribe training according to periodization phase. Thus, the purpose of this study was to determine TLL and blood lactate responses to rest intervals of varying durations. The authors hypothesized that TLL would be greater during 120 seconds rest interval and blood lactate concentration would be higher during 30 seconds rest interval in resistance-trained individuals.

The current study aimed to investigate the effect of different rest interval durations between sets during full-body resistance exercise sessions on TLL and blood lactate concentration.

Ten young men (age: 23 ± 6.5 years; total body mass: 82.8 ± 10.6 kg, height: 177.3 ± 0.1 cm) experienced in resistance training (3.1 ± 2.2 years) volunteered to participate in this study. The inclusion criteria for participation were: a, at least 2 years of continuous experience in resistance training; b, performing at least 3 resistance exercise sessions per week. The exclusion criteria were: a, having previous injury that may interfere with resistance exercises; b, self-reported use of anabolic steroids; and c, using nutritional supplements containing creatine. A study-power analysis suggested that 10 subjects was an adequate sample size to meet effect size of 1, alpha level of 0.05 and a power (1-β) of 80. This study was approved by the Piracicaba Methodist University (SP, Brazil) research ethics committee (protocol number: 19/13) and all subjects read and signed an informed consent document.

Each resistance exercise session consisted of 6 exercises targeting the upper and lower body musculature (bench press, seated low row, shoulder press, back squat, leg press 45° and seated calf raise) performed with 4 sets of 10 repetition maximum (RM). Range of motion was standardized for all exercises and the cadence was 2 seconds for negative and positive phase. A metronome was set at 60 beats per minute to assist the subjects in controlling the velocity of movement execution. The difference between exercise sessions was the manipulation of inter-set rest intervals: 30 seconds, 60 seconds or 120 seconds. In case of a performance decrement (reduction in the number of repetitions) during the sets, the external load was adjusted, aiming to maintain the repetition zone intensity of 10RM. The subjects were verbally encouraged and motivated by the research staff to make maximal efforts during resistance exercise sessions. The resistance training sessions were individually supervised by personal trainers to ensure that the target 10RM was achieved in all exercises 4 sets of 10RM for each exercise was chosen because this is a common protocol in resistance training routines. All measures were performed at the same approximate time of day, between 6 pm and 10 pm.

The 10RM test was performed to determine intensity load for the exercises: a, bench press; b, seated low row; c, shoulder press; d, back squat; e, leg press 45° and f, seated calf raising. Briefly, the subjects performed a warm up of 3 sets of 10 repetitions at ~ 40% - 60% of the estimated 10RM before the beginning of the 10RM test. Thereafter, all subjects were instructed to perform 10 repetitions until concentric failure. The load was adjusted ~ 10%, if the subject did not complete 10RM with proper lifting technique. Two spotters were present to observe the lifting technique and to ensure the subjects’ safety. The protocol was performed with a maximum of 5 attempts and a rest interval of 180 seconds was afforded between each attempt. The rest interval between exercises was 300 seconds. All subjects were familiarized with the resistance exercise in this study. Subjects reported that they performed 3 to 5 sets and 8 to 12 repetitions during the course of their normal resistance training programs.

The TLL was determined in all resistance exercises according to the formula: TLL = number of sets × number of repetitions × external load (kg). The TLL data are expressed in kg.

The normality and homogeneity were assessed by Shapiro Wilk and Levene’s tests, respectively. One way, repeated measures analysis of variance (ANOVA) followed by Bonferroni’s post-hoc test were used for comparisons between experimental conditions. Cohen’s formula for effect size (ES) was calculated (Mean 1 - Mean 2 / pooled standard deviation), and the results were based on the following criteria: < 0.35 trivial effect; 0.35 - 0.80 small effect; 0.80 - 1.50 moderate effect; and > 1.5 large effect, for recreationally resistance-trained, according to Rhea (34). Data are expressed as mean ± standard derivation (SD). An alpha of 0.05 was used to determine statistical significance. 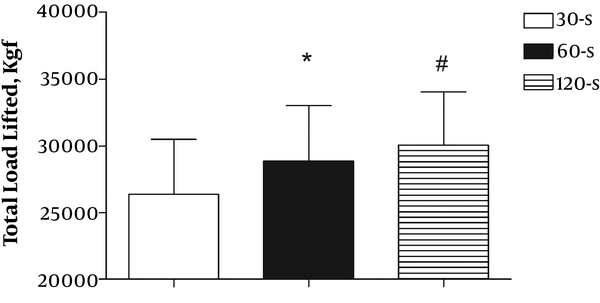 It is well recognized that mechanical and metabolic stress imposed during resistance training is a primary stimulus to adaptive skeletal muscle response (35). Specifically, the length of the rest interval between sets directly affects phosphocreatine (PCr) resynthesis, proton buffering and removal of metabolic byproducts (9). Thus, it is expected that a very short rest interval between sets would induce an incomplete muscular recovery, theoretically maximizing metabolic stress and reducing performance.

On the other hand, short or intermediate rest intervals are commonly used in bodybuilding-type protocols to maximize hormonal response, body composition profile and muscle hypertrophy (38). Scudese et al. (39) examined examine the influence of rest period duration (1 vs. 3 minute between sets) on acute hormone responses to a high-intensity and equal volume bench press workout. These researchers found that both short and long rest periods enhanced the acute testosterone response, however, the longer rest interval promoted a longer-lasting elevation for both free and total testosterone. Although the manipulation of rest intervals may positively alter the anabolic hormonal response, it remains questionable whether this favorable hormonal milieu translates into a greater rate of protein synthesis or muscle hypertrophy. In fact, Mckendry et al. (40) showed that a 1 minute rest interval between sets of moderate-intensity, high-volume resistance exercise blunted the acute anabolic intracellular signaling response that modulates protein synthesis compared with a longer rest period (5 minutes), despite a superior circulating hormonal setting. In regard to body composition, Villanueva et al. (16) compared the effect of short (1 minute) versus long (4 minutes) rest intervals on body composition and strength in trained older men. A greater enhancement in body composition, muscular performance, and functional performance was demonstrated with the shorter rest interval, compared to the same RT prescription with extended rest interval, in older men.

Lactate is a metabolite formed in anaerobic glycolysis, and its concentration is increased in the bloodstream during high-intensity exercises (41). In the current study, the analysis of blood lactate concentration post-exercise (pre to 10-minutes) and the observed peak values indicates a relevant reliance on glycolysis as an energy pathway. However, no significant difference was found for blood lactate response between the short and moderate rest intervals investigated (Figure 2). These data indicate that the magnitude of anaerobic glycolytic pathway activation was similar between the rest interval of 30 seconds, 60 seconds and 120 seconds for resistance-trained men. 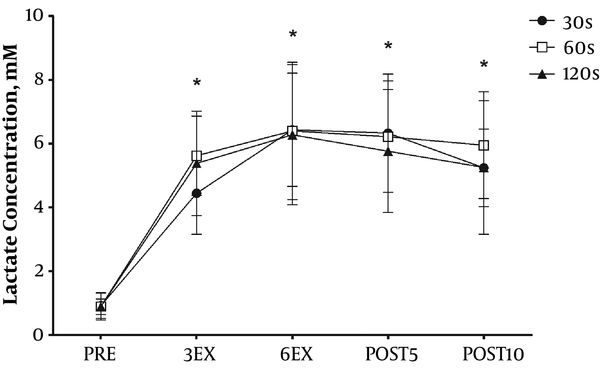 This result is contrary to the initial hypothesis that blood lactate concentration would be higher during 30 seconds rest interval between sets due to lower PCr resynthesis capacity. In this study, the 30 seconds rest interval between sets induced a greater level of fatigue as reflected by the lower TLL. Therefore, it is reasonable to speculate that the higher TLL performed in the 60 seconds and 120 seconds conditions required a relevant participation of the glycolytic energy system, as a result matching the metabolic stress mimicked by the short interval rest recovery.

In agreement with the current findings, Rahmi et al. (9) investigated the effects of 3 intermediate rest intervals (60 seconds, 90 seconds and 120 seconds) in squat and bench press exercises (4 sets 85% 1RM to muscular failure) in resistance-trained men and found no significant difference in blood lactate post-exercise between conditions. Similarly, Hiscock et al. (24) also observed no significant change for blood lactate comparing 120 seconds and 240 seconds rest intervals between sets during single biceps curls exercise (3 sets at 70% 1RM to muscular failure) in recreationally trained men. It should be noted that in Rahmi et al.’s (9) and Hiscock al.’s study (24), the TLL were also not different between conditions. These results (9, 24) are consistent with the current study that indicates 60 seconds and 120 seconds rest intervals with TLL equated results in a similar blood lactate response.

In conclusion, the rest internal durations of 60 seconds and 120 seconds between sets favored a higher TLL and induced a similar blood lactate response compared to short rest interval of 30 seconds, during a full-body resistance exercise session in resistance-trained subjects. Given that 30 seconds rest reduced TLL without increasing metabolic stress - 2 factors that have been shown to enhance anabolism - it can be inferred that such a short rest period may be detrimental to long-term neuromuscular adaptations in resistance-trained men. Thus, practitioners should employ rest periods of at least 1 minute in duration when the goal is to maximize muscle strength and hypertrophy.

Copyright © 2018, Asian Journal of Sports Medicine. This is an open-access article distributed under the terms of the Creative Commons Attribution-NonCommercial 4.0 International License (http://creativecommons.org/licenses/by-nc/4.0/) which permits copy and redistribute the material just in noncommercial usages, provided the original work is properly cited
download pdf 260.50 KB Get Permission (article level) Import into EndNote Import into BibTex
Number of Comments: 0