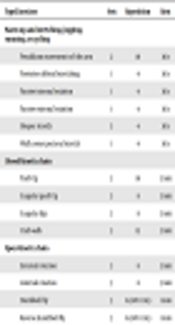 In accordance with the multiple causes of impingement syndrome being a major injury of the swimmers' shoulder, choosing an effective method in preventing shoulder injury is important. The purpose of this study was to compare the effect of eight weeks open and closed kinetic chain exercises on muscle torque of internal and external rotators of shoulder in elite swimmers.

In this study, 45 swimmers were selected based on the inclusion criteria and divided randomly and equally into three groups of open chain, closed chain exercises, and control. Both open and closed chain groups performed their own exercises three times a week for eight weeks, but no upper extremity exercises were given to the control group. Before the training, the pick torque of the external and internal rotators of shoulder were measured by the isokinetic HUMAC NORM machine at various speeds of 60, 120 and 180 degrees/s. After eight weeks of practice, the variables were re-measured. Shapiro-Wilk test was used for data normalization, one-way ANOVA and Tukey post hoc testes were used accordingly to compare the groups and to show the intra-group difference (P < 0.05).

Swimming is one of the most popular sports in the world, which has various levels, including recreation - public to professional and championships which has overhead activities. Based on the nature of prolonged and high-level drills, the risk of shoulder overuse injury seems to be higher in swimming compared to the other sport disciplines (1-3). The method of treatment for this injury depends on the type of it, age of the athlete and level of activity. In a study conducted on swimmers in 2015, 20% had musculoskeletal injuries and the most common region of injury among them was shoulder with an incidence of 44% (4), which clearly highlights the priority of prevention vs. treatment. There are various treatments for shoulder injuries which range from exercise therapy and electrotherapy to plasma rich protein (PRP), arthroscopic surgery, and open surgery. Among them, exercise therapy is the one which could enhance both the mobility and stability of the shoulder (5-8).

The shoulder mobility is achieved through four glenohumeral, acromioclavicular, sternoclavicular and thoracoscapular joints (9). The shoulder is stabilized by muscles (dynamic stabilizers), as well as ligaments and joint capsules (static stabilizers). Muscles or dynamic stabilizers include muscles surrounding the shoulder joint (e.g. deltoid, serratus anterior, and trapezius) and rotator cuff muscles. The rotator cuff consists of four muscles (supraspinatus, infraspinatous, teres minor, and subscapularis) and play a key role in shoulder stability. Among these four muscles three of them are shoulder external rotators (10). Regarding the kinematics and biomechanics of swimming, it seems that factors such as decreasing articular stability which happens due to the repeated overhead activities will result in accumulation of micro traumas to the shoulder’s stabilizer ligaments and also fatigue of muscles which provide dynamic stability (rotator cuffs). Fatigue and weakness of the rotator cuff muscles may also lead to dyskinesis of humerus in the glenoid, and finally the external impingement of the rotator cuff muscles in the upper anterior part of the coracoacromial space happens (11). Imbalanced muscle activation, rather than an overall weakening of muscles surrounding the shoulder joints, mainly causes structural changes (12).

In swimming hand drills, external rotation is increased at 90 degrees of abduction, as well as strength ratio of internal to external rotator muscles, so the scapula has winging and excessive protraction (13). Stretching, as well as endurance and strength training of serratus anterior, rhomboids, lower trapeziuses, and subscapularis along with core stability exercise are effective for injury prevention in swimmers (14). If exercises are limited in water for a long time, it can increase the strength of the internal rotators and reduce the ratio of internal to external rotator muscles, which increases the risk of swimmers' shoulder. Therefore, it is recommended to conduct dry-land strength training to prevent injury (15). Some studies show that dry-land exercises improve this ratio in swimmers and can dramatically strengthen the external rotators (16, 17).

Due to the strengths and weaknesses of both types of exercises and because of the controversy among research results, a combination of open and closed kinetic chain exercises are suggested for shoulder muscles, but the choice of an effective method in preventing shoulder injury is still a matter of question.

The purpose of the current research was to answer this question and find the best and the most effective exercise type for prevention, treatment and rehabilitation of swimmers’ shoulder.

The population of this study was healthy male swimming students and swimmers who were currently in the national team camp from June to august 2017, aged between 18 to 25 years. Their swimming program was at least three times a week, and each time equal to or more than 2000 meters of crawl or backstroke. Out of them, 45 subjects were selected according to the inclusion criteria of the research and were randomly divided into three groups of open and closed kinetic chain, and also the control. Participants in each group of open and closed chain trained in their relevant program for eight weeks, three times a week and no dry land training was given to the control group. The duration of training were 8 weeks in accordance with the previous research (22). The strength exercises were prescribed as 80 to 90% of 1RM and repetition of 5 to 6 times in 3 sets with 2 to 5 minutes of recovery. The strength training was designed and performed progressively. The validity of training protocol was evaluated by content validity index (CVI) and content validity ratio (CVR) (23). The result showed that CVI was 88% and CVR 85% so the protocol was valid. These exercises were designed based on valid sources of sports rehab (24). The warm up and stretching program were the same for both open and closed chain groups and the workout program is shown in Table 1:

Table 1. Training Protocol in Both Groups

After eight weeks of training, which was conducted with full training of supervised athletes, a post-test was performed.

Measurement of the internal and external shoulder rotator muscles’ torque:

In this study, each time as pre-test and post-test, the torque of internal and external shoulder rotator muscles was measured using the HUMAC NORM isokinetic device at speeds of 60 degrees per second 120 degrees/s and 180 degrees/s. In order to conduct the test, each subject was seated on dynamometer seat. The straps were fastened to the individual's chest to fix the trunk. The shoulder was placed on plane of scapula (45 degrees abduction, 30 degrees flexion, 90 degrees flexion of the elbow and forearm in the pronation by strap). Horizontal position of the dynamometer’s lever arm was considered as a zero angle and a range of motion compared to that of 90 degrees was determined. By eliminating the gravity, the shoulder rotational movement was carried out in the 90 degree range, which included a roughly 90 degree external and internal rotation. First, the muscles were tested in concentric mode and then an eccentric mode was performed after 30 seconds. After a brief explanation of how the machine works for subjects, they first performed five submaximal contractions as warm up. Then they completed five maximal intensity repeats each at 60, 120 and 180 degrees per second and the torque of internal and external shoulder rotator muscles was measured and recorded.

One-way ANOVA followed by post hoc Tukey test were used to analyze the data. For statistical analysis of raw data, SPSS software (version 22) was used. Meanwhile, the confidence level of the test was 95% and the significance level for all statistical methods was considered at P < 0.05.

Demographic characteristics of samples are shown in Table 2. Using Shapiro-Wilk test, it was found that distribution of variables in all three groups had a normal distribution.

Table 2. Mean and Standard Deviation of Age, Height and Weight of 3 Groups

The data of shoulder internal rotator muscles’ torque of the subjects is presented in Table 4.

Therefore, it could be concluded that the effect of training was significant in improving the torque of internal shoulder rotator muscles, and the highest effect was due to the open kinetic chain exercises.

We had limitations in using electromyography on these muscles and in future studies it is better to evaluate these variables with electromyography. The maximum voluntary contraction (MVC) and muscle activity onset detection had a lot of useful information regarding this issue.