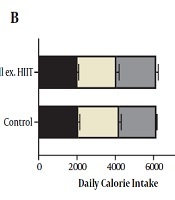 The objective of this study was to assess the effect of non-weight bearing all-extremity HIIT (all ex. HIIT) on anti-inflammatory proteins like PTX3.

In this cross-sectional semi-experimental study, 30 overweight and obese female participants with the mean age of 20.50 ± 1.50 years and the mean weight of 80.70 ± 13.70 kg were randomly assigned to all ex. HIIT and control groups. Training consisted of 4 × 4 min 85% - 90% max HR, and 3 × 3 recovery by 70% max HR with upper and lower body training in a simultaneous manner (four sessions per week for 10 weeks). PTX3, interleukin10 (IL10), tumor necrosis factor alpha (TNFα), lipid profile, glycemic profile, heart rate (HR) and blood pressure (BP) were assessed before and after the intervention.

At the end of the intervention, no significant difference was observed in PTX3 (P = 0.47), IL10 (P = 0.67) and TNFα (P = 0.92) levels between the groups. Low-density lipoprotein (LDL) decreased by 13.5% in the all ex. HIIT group, while the triglyceride (TG), cholesterol (CHOL), high-density lipoprotein (HDL) and glycemic profiles remained unchanged in both groups. HR and systolic and diastolic BP decreased by 12.2%, 2.3% and 6%, respectively, in the all ex. HIIT group, while they remained unchanged in the control group. There was no significant change in PTX3, but as to its correlation with IL10 and HDL a slight change is observed.

All ex. HIIT may be a safe exercise that decreases LDL, HR and systolic and diastolic BP in overweight and obese individuals unable to perform weight-bearing HIIT.

Stationary ergometer can eliminate the above-mentioned problems. However, for increasing active muscle mass in exercise, it may be appropriate to train both the upper and lower body. To the best of our knowledge, there is a scarcity of studies on the effect of this type of exercise on anti-inflammatory cytokines in overweight and obese individuals.

Thus, we aimed to evaluate the effect of all ex. HIIT on anti-inflammatory PTX3, IL10 and inflammatory TNFα in overweight and obese women.

Thirty female students aged 18 - 23 years old participated in this study. The Ethics Committee of the University of Isfahan (Iran) approved the study protocol (code: 1396.041), and informed consent was obtained from each participant prior to the study. The inclusion criteria consisted of healthy, sedentary, overweight and obese women with body mass index (BMI) ≥ 27 kg/m2. The exclusion criteria included diabetes, cardiovascular diseases, hormonal complications, use of drugs or any kind of supplements, dietary restriction, physical activity (> 2 D/week), smoking and pregnancy. The subjects were equally assigned to training and control groups. The training group participated in all ex. HIIT, while the control group continued sedentary lifestyle with no changes in dietary habits or daily physical activity during the study period.

This study was extracted from a dissertation with a cross-sectional, semi-experimental design. The subjects were randomly assigned to all ex. HIIT and control groups. Randomization was based on coin tossing. Subjects in both groups were instructed to maintain and follow their daily physical activity and diet. The independent variable was all ex. HIIT and the depended variables were anthropometric and blood analyses consisting of PTX3, IL10, TNFα, triglyceride (TG), cholesterol (CHOL), high-density lipoprotein (HDL), low-density lipoprotein (LDL), resting heart rate (HR) and resting blood pressure (BP), which were measured at baseline and 48 hours after 10 weeks of the intervention in a fasting state (Table 1).

Table 1. Anthropometric Characteristic of All ex. HIIT and Control Groups

After 12 hours of fasting, the anthropometric variables of the subjects consisting of height and weight were measured by a scale (SEGA, model 220, Germany) with minimum clothing. BMI was calculated by the W (kg)/H2 (m) equation. After 20 min of resting in the sitting position, a blood pressure monitor (Omron MX3, England) and pulse meter (Polar F4, Finland) were applied to evaluate the resting BP and HR. Daily physical activities (step/day), excluding the training program, were assessed by a pedometer (iHealth Edge, Inc. USA) at pre, mid and posttest. These activities were measured three times, two weekdays and one weekend. The obtained means thereof were compared within and between the groups. Daily calorie intake was assessed by the NUT 4 questionnaire, and its diet analyzer software was modified to fit the Iranian food table (17) at pre, mid and posttest on two week days and one weekend each, and the mean of the time series was compared within and between the groups.

The sessions were held four times a week (40 min/day) for 10 weeks. The first week was considered as pre-conditioning and familiarization. According to gradual increase in exercise intensity principle, the training intensity was considered 65% - 70% HR max or RPE 12-13 in the first week, 70% - 75% HR max or RPE 13-14 in the second, 75% - 80% HR max or RPE 14-15 in the third and 85% - 90% HR max or RPE 16-17 in the forth to the tenth weeks (22). During this period, the members of the control group did not change their daily physical activity and calorie intake as checked through a pedometer and diet analyzer software (NUT-4) modified to fit the Iranian food table (Figure 1).

Figure 1. Comparison of daily physical activity (A) and daily calorie intake (B) in the all ex. HIIT and control groups in pre, mid and posttest

All the statistical analyses were performed in SPSS (version 22; SPSS Inc., Chicago, IL, USA). Shapiro-Wilk test and Q-Q plots were applied for checking the normality of data distribution. Levene’s test was performed to assess the homogeneity of variances. Paired samples t-test and Wilcoxon were run for the evaluation of parametric and nonparametric data, respectively. T-test and analysis of covariance (ANCOVA) were applied for comparisons within the groups, and pretest scores were considered as covariates. Repeated measures ANOVA and Krouskal-Wallis were applied to compare daily calorie intake and daily physical activities, respectively. Variables were recorded as the mean± SD for normal and as the median (interquartile range) for non-normal data. Level of significance was set at 0.05. Pearson and spearman correlations were applied to assess the correlation between PTX3 and other variables in parametric and non-parametric data, respectively.

Table 2. Effect of All ex. HIIT on Anti-Inflammatory Factors, Lipid and Glycemic Profiles

cResulted from analyses of covariance (ANCOVA) adjusted by baseline

Response of cardiorespiratory function to all ex. HIIT: resting HR declined by 12% in relation to its baseline at (P < 0.001) and at (P < 0.001) between the groups. Systolic and diastolic BP decreased by 2.3% and 6% in the all ex. HIIT group, respectively, while they remained unchanged in the control group (Table 3).

Table 3. Effect of All Extremity HIIT on Cardiovascular Factors

In this study, the effects of all ex. HIIT on PTX3, IL10, TNFα, lipid and glycemic profiles, resting HR and BP of overweight and obese women were assessed. A significant reduction in LDL, resting HR and BP of subjects following all ex. HIIT was observed with no changes in PTX3, IL10, TNFα, TG, CHOL and HDL. Here, all ex. HIIT caused no changes in circulating PTX3. To the best of our knowledge, this is the first study where the effect of all ex. HIIT on PTX3 has been assessed in overweight and obese women. In most of the available studies, the acute effect of exercise on PTX3 was assessed and an elevated concentration in plasma were reported (23, 24). According to (25), 12 weeks of modification in diet and aerobic training decreased weight and increased PTX3 in elderly and obese individuals. The same researchers reported that walking and jogging were used as weight-bearing activity.

Here, non-weight-bearing exercises with all extremities was assessed where a modest weight reduction was observed, while PTX3 remained unchanged. The observed results might be due to the nature of non-weight bearing exercise or its duration.

IL10 is an anti-inflammatory cytokine which is impaired in obesity (26). Here, IL10 remained unchanged after all ex. HIIT. Our findings were consistent with those of (27, 28) as to changes in IL10 after short-term and long-term lower ergometer HIIT, respectively. According to (29), IL10 was elevated in active healthy elderly men. Thus, it could be deduced that longer duration of training may affect the level this cytokine. Although both PTX3 and IL10 as athero-protective molecules showed no significant changes, differences in pre-post measurements between these two variables showed significant correlations. It is suggested that PTX3 as a component of innate immunity is regulated by IL10 (4). In this study, in a 10-week period, TNFα remained unchanged after the intervention, which corresponds to the findings in (27), where eight weeks of aerobic training (cycling) caused no changes in TNFα in obese individuals (27). Conversely, eight weeks of aerobic training and dietary restriction reduced TNFα in overweight adolescents in (28). Despite the hypothesis that all ex. HIIT decreases TNFα, it appears that long duration of exercise or weight-bearing training might reduce this inflammatory marker.

At the end of the intervention, all glucose and lipid profile markers remained unchanged, except for LDL, which decreased in the training group. There is some conflicting data regarding the effect of HIIT on lipid profile and glucose in obese adults. According to (28, 30), weight-bearing HIIT led to no changes in TG, CHOL and HDL. Researchers in (18, 29) demonstrated that all ex. HIIT could not change FBS in obese individuals, while others reported that glucose and lipid profile improved after HIIT (30). It is reported that improvement in lipid profile after exercise may be related to the baseline level (29).

In this study, LDL was deceased, indicating an important health benefit. Based on the findings of (31), any 1% decrease in LDL may reduce the risk of cardiovascular diseases (CVD) by 2%. Despite the lack of change in HDL, it was found to be positively related to PTX3. Therefore, changes in these two variables are related to each other and with longer period of training, better results could be observed in this area. In this study, reduction in resting HR and systolic and diastolic BP was observed. HR and BP are powerful predictors of total cardiovascular mortality (32). Decreased vascular resistance and catecholamine level are related to the reduction of HR and BP after exercise (33). As to the reduction in HR and BP through HIIT, our findings correspond to those of (31, 32), while they are contradictory with the results of (34). The differences in these results may be due to the type and duration of the HIIT and the general conditions of the subjects.

Strengths and limitations of the study: This was the first study run on the effect of all ex. HIIT among overweight and obese women and the whole period was supervised by an exercise physiologist with HR monitoring. This study also had some limitations such as: (1) including only young female subjects, which limits the generalizability of the outcomes to male or older subjects and (2) being confined to a 10-week period, otherwise, better results would have been obtained.