Association of Hamstring Strain Injuries with Season and Temperature in Track and Field Collegiate Athletes in Japan: A Descriptive Epidemiological Study 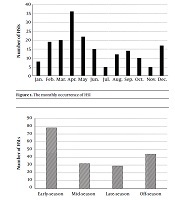 We recruited track and field athletes and recorded information about hamstring strain injuries between January 2013 and December 2016. Each year was divided into four seasons (March - May: early-season; June - August: mid-season; September - November: late-season, and December - February: off-season), and the incidence of hamstring strain injury in each season was calculated. The incidence rate ratio for each season was calculated according to the temperature of the day when an injury was recorded.

This study results suggest that hamstring strain injury is most likely to occur in early-season, possibly due to the low temperatures that characterize this season and the rapid increase of running speed required for subsequent competitions.

Hamstring strain injury (HSI) is the most common injury in many sports (1-3). Track and field is an example of a sporting discipline where HSI occurs frequently. Edouard et al. reported that the incidence of thigh injury (28.0% of all injuries) was the highest among all injuries reported in the European track and field championships in 2012 and that most of these thigh injuries were HSIs (4).

Many surveillance studies of injuries in track and field competitions have been conducted (4-7); however, there is limited information on injury prevalence and risks in track and field athletes during the entire season (8). Long-term changes in training load and temperature may affect the occurrence of HSIs. Further studies on the timing of HSIs with regards to training load and season could provide insights into the mechanisms underlying this injury.

A change in the training load is a factor that can influence the distribution of the occurrence of HSIs. Athletes optimize their performance in competitions by controlling speed and workload volume during training. Duhig et al. demonstrated that exposing Australian Football League players to large and rapid increases in distance of high-speed running increases the risk of HIS (17). Track and field athletes rapidly increase the running speed at which they perform training at the beginning of the season. If this increase in running speed is related to HSI, it can be predicted that this injury will be significantly more common at the beginning of the season, i.e., spring.

We recruited all track and field athletes who trained at the track and field club in the university between January 2013 and December 2016. We defined HSI as “pain in the posterior thigh experienced by an athlete, irrespective of the need for medical attention or time loss from track and field activities,” based on the consensus statement for injury surveillance in track and field (8).

We recorded the day on which the injury occurred, participation event (Event), injured leg, and participant gender. The average temperature of the day of injury was recorded by referring to the Japan Meteorological Agency for the city where the university is located (Aichi, Japan). We classified a year into four seasons (March - May: early-season, June - August: mid-season, September - November: late-season, and December - February: off-season) and calculated the incidence of HSI for each season. We considered the number of participants that were recruited in the particular year as the denominator for calculation of the incidence of HIS for that year.

We calculated the incidence of HSI using the person-time method (e.g., If 20 HSIs occur during 10 months in 200 athletes, the incidence is 10/1000 person-months). We assessed the significance of the results for dependent variables by calculating the incidence rate ratio (IRR) and 95% confidence interval (95%CI). Results were considered significant when the 95% CI did not overlap with “1”.

To investigate the influence of temperature on the occurrence of HSI, we calculated the IRR according to the following procedure:

● The number of days corresponding to each temperature zone was calculated for each of the four years.

● The number of days for which injuries were recorded was calculated for each average temperature zone.

● The IRR for each temperature zone vs the other zones was calculated.

Informed consent was obtained from each participant included in this study.

The study protocol was consistent with the ethical guidelines of the 1975 Declaration of Helsinki.

We recorded 183 HSIs among the college track and field club athletes enrolled in this study over the four-year study period. This was calculated to represent an HSI incidence of 16.98/100 person-years. The number of participants for each year is shown in Table 1. The summary of the results is shown in Table 2.

Table 1. The Number of Athletes Who Participated at the Club (Male:Female)
Table 2. Summary of Main Results

aResults were considered significant when 95% CI of IRR did not overlap with one. Figure 1. The monthly occurrence of HSI Figure 2. The occurrence of HSI in each seasons

There was no significant difference in temperature between the injury days and control days (Figure 3). Athletes who participated in sprint or combined events had significantly higher incidences of HSI than those who participated in other events. Sprint and combined events include maximal sprint running during competition and training, while jump and long-distance events include either submaximal running or no running. Therefore, maximal sprint running can be concluded to be associated with the occurrence of HSI. The sprint speed of each athlete was not investigated in this study; hence, further studies investigating the association between HSI and sprint speed would be informative.

The results of this study confirm our hypothesis regarding the distribution of HSI occurrence. Early-season is considered to be more dangerous than the other seasons for two reasons. First, the temperature is low during this season. Second, sprint speed at training rapidly increases during this season. Our results of the incidence of HSIs indicate that temperature affects the occurrence of HSIs, which more likely to occur at low temperatures and less likely to occur at high temperatures. The low- and very-low-temperature zones correspond to the off-season in Japanese collegiate track and field. Therefore, it is considered that most subjects did not run at high speed when these temperature zones. A previous study has shown that nerve conduction velocity decreases in response to cold stimulation (16). Rapid movement at low environmental temperatures may therefore promote the occurrence of HSIs via this mechanism. In contrast, Lawrence et al. reported that mean game-day temperatures were not related to the risk of HSI in National Football League (NFL) (18). This discrepancy can be explained by differences in the schedules of the individual competitions, and the effects of temperature on HSIs may have been over- or under-estimated due to influence of the competition schedule. In fact, there was no significant difference in temperature between the injury and control days. This result means that small temperature changes in the same season may not affect the occurrence of HSIs. The regular season of NFL is from September to February. These two sports (NFL vs. Track and Field in Japan) have different patterns of temperature change during the season. This difference may affect the complex relationships between HSI, temperature, and training load.

This study has some limitations, which should be acknowledged. First, we cannot conclude a causal relationship between environmental temperature and the occurrence of HSIs. Due to the lack of data on training programs and the difficulty in comparing temperature data, we were unable to compare the relationship between temperature and occurrence of the injury directly. To overcome this, future studies should include other important factors in addition to environmental temperature. Second, we did not monitor the training load, and the results of this study may be affected by the training methodology of coaches. However, most athletes who participated in this study had a training program of their own except for long-distance and combined athletes. Finally, since all the subjects in this study participated in the same team, we could not generalize the results of present study to all Japanese collegiate track and field athletes.

In Japanese collegiate track and field athletes, the incidence of HSIs is significantly higher in the early-season than in the other seasons. Athletes who participate in events that include maximal sprint running (sprint and combined events) are at a significantly higher risk of HSIs than those who participate in other events. The incidence of HSIs is significantly lower in very-high-temperature zones, and significantly higher in lower-middle-temperature zones. However, early-season is associated with a higher injury rate than off-season even though the temperature is higher. From the results of this study, low environmental temperatures and rapid increase in running speed are associated with the occurrence of HSI in track and field athletes. It is, therefore, advisable to perform sufficient warm-up exercises when environmental temperatures are low and to avoid rapidly increasing the sprint speed over a short period of time.

We appreciate the teaching and helping of the Graduate School of Chukyo University. We thank Japan Meteorological Agency, for providing the temperature data. We thank Ankita Chakra, from Editage Group (www.editage.jp), for editing a draft of this manuscript.