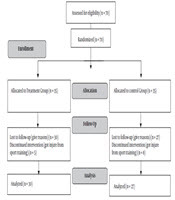 Kaempfera (K.) parviflora (i.e., Thai ginseng) is believed to have medicinal properties associated with good health (e.g., increased vitality, metabolism booster) because it expands blood vessels, which allows for increased blood flow. These effects might extend into the realm of improving physical performance, specifically that of the cardiovascular system.

A randomized, placebo-controlled, parallel design study was conducted to determine the effects of 12 weeks of K. parviflora supplementation on the cardiovascular endurance of healthy male adults.

No main or interaction effects were observed for the lactate threshold (all P > 0.05). No group differences were observed for heart rate recovery (P > 0.05); however, a significant time effect was observed for heart rate recovery at weeks 6 and 12 (P < 0.05), which also marked the beginning of an interaction effect showing that those in the experimental group improved more than those in the control group (P > 0.05).

In this set of observations, 12-weeks of K. parviflora supplementation had no effect on the lactate threshold; however, it does appear that it might have improved heart rate recovery.

Samoonprai herbs are purported to have medicinal properties (1). They have been used in Asia for more than 2,000 years to promote human health, including the prevention and treatment of various diseases among different population segments (2). Thai ginseng (Kaempferia [K.] parviflora, Krachaidum; previously Boesenbergiapandurata) is farmed in Thailand in the upper northeastern provinces of Loei and Petchabun, as well as the Central Province of Kanchanaburi. It is in the same family of Zingiberacae as ginger, galangal, and some sedges (3) and taxonomically unrelated to the more frequently studied Panax (a.k.a., Chinese or Korean ginseng) variety of ginseng (3-5).

Given its theoretical potential for increasing cardiovascular endurance, the inconclusive evidence for the much more commonly studied Panax variety of ginseng, and the limited and unclear empirical evidence accumulated to date for K. parviflora ginseng, the present study was undertaken.

The specific purpose of this study was to examine K. parviflora supplementation’s effects on the cardiovascular endurance of military cadets engaged in physical training as they prepared for the four force games of Thailand.

Participants included 57 Thai Air Force cadets who were undergoing physical training for sports competition (Figure 1). Participants were randomly assigned into either the treatment group (n = 30) (Age: M = 20.30 ± 0.65; body weight: 66.53 ± 6.76 kg; and body height: 172.30 ± 5.24 cm) or the control group (n = 27) (age: M = 20.37 ± 0.68; body weight: 66.07 ± 7.25 kg; and body height: 173.07 ± 3.83 cm), with no demographic differences observed between groups (Table 1). All participants had passed a physician-administered exam, had no history of chronic disease and were deemed to be in good health. They also had to have passed the fitness test for athletes administered by the Royal Air Force Academy. Excluded from study participation were those with a history of allergic reaction to K. parviflora, those taking medications that might compromise the integrity of the study (e.g., Viagra), and those who had participated in other clinical trials during the prior 3-month time period. All participants provided their written informed consent prior to their participation in the study. The study was approved by the Ethics Review Committee for Research in Human Subjects, Ministry of Public Health, Thailand (reference number: 6/2558). 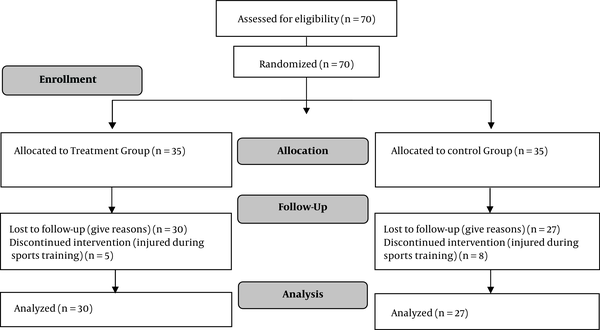 Figure 1. Consort diagram of the study
Table 1. Demographic Characteristics of the Participantsa

aValues are expressed as ± SD.

The preparation and standardization of the K. parviflora capsules and placebo capsules were controlled and assured by the Center for Research and Development of Herbal Health Product, Faculty of Pharmaceutical Sciences, KhonKaen University. The K. parviflora capsules contained 90 mg of plant rhizome extract along with 5,7-dimethoxy flavone (2.1%), 5,7,4-trimethoxyflavone (3.1%), and 3,5,7,3,4-pentamethoxyflavone (2.3%). Identical 90 mg placebo capsules comprised of starch powder were also manufactured using the same pharmaceutical excipient and packaging (8, 14).

Lactate threshold (LT) and heart rate recovery (HRR) were determined following the incremental exercise program protocol (15), which was administered at baseline (week 1), week 6, and week 12. Participants began with warm-up cycling at 20-watts for 3 minutes. Subsequently, every minute after that the intensity was increased by 25 watts until the heart rate reached 90% of the maximum heart rate, or the participant’s rating of perceived exertion (RPE) was > 15, or until the participant could not cycle beyond 70 revolutions per minute (RPM). Afterward, the intensity decreased to 20 watts, and the participants had to continue cycling for an additional 5 minutes. Heart rate was recorded every minute for HRR. The LT was determined by the ventilation threshold method using an analysis of gas exchange by the START 2000M Ergospirometer (MES Company, Poland) (16, 17).

This was a randomized, placebo-controlled, parallel design study conducted over 12 weeks. Participants were randomly assigned to one of two conditions. For 12 weeks, those assigned to the experimental group consumed two K. parviflora capsules (90 mg/each) before breakfast and before dinner (i.e., 360 mg daily) (8, 14). During this same time and following the same administration schedule, control group participants consumed placebo capsules. Neither the participants nor the researchers knew which participants were in which experimental condition (i.e. the study was double-blinded). Throughout the study, participants in both conditions were undergoing physical training in preparation for their participation in the 2015 four force games of Thailand. This included sport training sessions (5 days/week, 12 weeks) that were conducted every morning for 1 hour with a focus on improving cardiorespiratory endurance, muscular strength, speed, and agility. Every afternoon 2 additional hours were spent engaged in physical activity with the focus being on sport skill development and strategy.

To monitor for complications (i.e., side effects), all study participants were interviewed each week by phone throughout the study. Any uncertain symptomology resulted in a physician referral for further evaluation.

Group by time changes for LT and HRR are summarized in Table 3, Figure 2, and Figure 3. Given the study’s design, the most important effect is the group by time interaction effect. Those are shown in Table 3. As can be seen in Table 3, there were no between or within-group differences or interaction differences for LT (all P > 0.05). However, significant differences were observed for HRR between the treatment group and the control group at the P < 0.05 level at week 6 and week 12 (Table 3).

Figure 3. Mean differences in HRR by group weeks 1, 6, and 12
Table 3. Changes in Lactate Threshold and Heart Rate Recovery by Group Over Timea

aValues are expressed as ± SD.

dP < 0.05 between the treatment group and the control group.

This study examined two hypotheses. First, those taking K. parviflora supplementation would improve their LT over the course of 12 weeks of physical training compared to those in the placebo control group. This hypothesis was not supported. Specifically, no differences were observed between the LTs of the treatment group and the control group during the study; however, within-group differences were observed for both groups’ LTs over time. This latter finding serves as a confirmation of a training effect among the study participants who were engaged in physical training 2 hours per day, 5 days per week for 12 weeks in preparation for the four force games. Among those who are regularly trained, their muscles are capable of using oxygen for energy longer than those who are not regularly trained. Thus, the muscles of those who are regularly trained will reach LT later than those who are not due to less lactate production and more lactate removal (18-21).

Even though the means of the LTs between the treatment and control groups did not differ significantly, the trend did appear to favor the treatment group (Figure 2). As noted by Brooks (19), an increased LT occurs both from physical training, which makes the muscles use more aerobic metabolism resulting in less lactate production, and also from improved blood flow, which results in faster lactate removal. Several studies have reported that blood flow is a critical factor in the removal of lactic acid after physical training (22-24). According to studies on its pharmacological properties, K. parviflora can expand blood vessels and, thereby, increase blood flow (7). In an animal study (22), male white rats that were given 70 mg/kg and 200 mg/kg of the K. parviflora extract once showed increased blood circulation. A dose-response was also observed, whereby those receiving 200 mg/kg of K. parviflora more extract increased blood circulation than those receiving 70 mg/kg of K. parviflora extract (22).

Blood vessel size also impacts the blood flow rate. For example, Brooks et al. (25) reported that blood flow varied at the rate of 5 and 10 mL per second through the radiuses of the blood vessel that were 4.2 and 5.0 mm, respectively.

The non-significant findings observed in the present study on LT are consistent with previous observations (17, 24). For example, Dodd et al. (24) tested the Panax variety of ginseng over 8 weeks among a sample of 17-22-year old participants at the Naval Medical Corps, Royal Thai Navy. Interestingly, though, Beaver et al. (16) found that 8-weeks of K. parviflora supplementation did enhance elderly volunteers’ cardiovascular endurance and muscular strength levels. One notable difference between these studies is the age of the study participants. Additionally, the Panax and K. parviflora varieties of ginseng are taxonomically unrelated (3-5), as such, they require independent study and verification. It may even be fruitful to do comparative studies between the two varieties.

The second hypothesis examined in this study was that those taking K. parviflora supplementation would improve in their HRR over the course of 12 weeks of physical training more so than those in the placebo control group. This hypothesis was supported. Specifically, at both weeks 6 and 12, those who had received K. parviflora supplementation had significantly better HRR rates than those who received the placebo (Figure 3). These observations are contrary to those observed for the Panax variety of ginseng in a meta-analysis of 12 randomized control trials (26). Beyond using a different variety of ginseng, the present study was significantly longer in duration than those included in the meta-analysis (i.e. 12 weeks vs. M = 7.33, SD = 2.15 weeks, t [11] = 7.53, P < 0.001) and the sample size of the present study was larger than that used in 9 of the 12 previous studies.

Only young, healthy, males were included in this study, which is a study limitation. In the aforementioned meta-analysis of Panax ginseng experimental trials (26), 75 percent of the studies involved healthy, young adults, whereas only 25 percent involved clinical populations (i.e. cancer patients, idiopathic chronic fatigue, and multiple sclerosis). Other study limitations include that the participants were not following a normal lifestyle and they were in preparation for a sporting contest, which required them to perform physical training 5 days per week for a total of 3 hours per day. Participants were excluded if they had a chronic health condition or were taking medications that might interfere with or be contraindicated with K. parviflora supplementation. Finally, in this study, only LT and HRR were assessed. In the future research, other variables might be considered (e.g. performance, rating of perceived exertion). These limitations restrict the generalizability of the study results.

This study determined the effects of 12-weeks of K. parviflora supplementation on LT and HRR, both of which are indicators of cardiovascular endurance, among military personnel training for a sports contest. In this set of observations, K. parviflora supplementation had no effect on LT; however, it does appear that it might have improved HRR. The commingled findings are difficult to interpret. As others have concluded before, further study is necessary to confirm the potential efficacy of ginseng supplementation, including different varieties of ginseng, dosages of ginseng, and its potential uses or value among more diverse study populations. Only through continued study can the true potential preventive, curative, and restorative value of ginseng be fully understood.